RECIPES: From sweet to meat 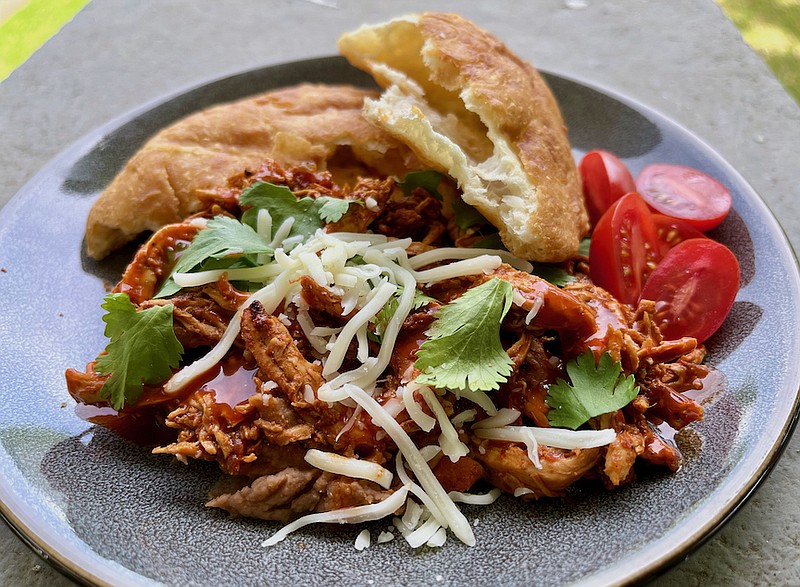 It was nothing short of a revelation.

Sopaipillas — those pillows of deep-fried dough so often drizzled with honey and served as dessert at Tex-Mex restaurants — needn’t be sweet.

The fried pockets could be filled with savory morsels like scrambled egg and cheese or pulled chicken or seasoned beef.

This revelation came while I was flipping through the pages of “Food Between Friends” by Jesse Tyler Ferguson and Julie Tanous. On page 106, to be specific: a luscious photo of Ferguson’s Sopaipillas Stuffed With Pulled Chicken in Red Chile Sauce. 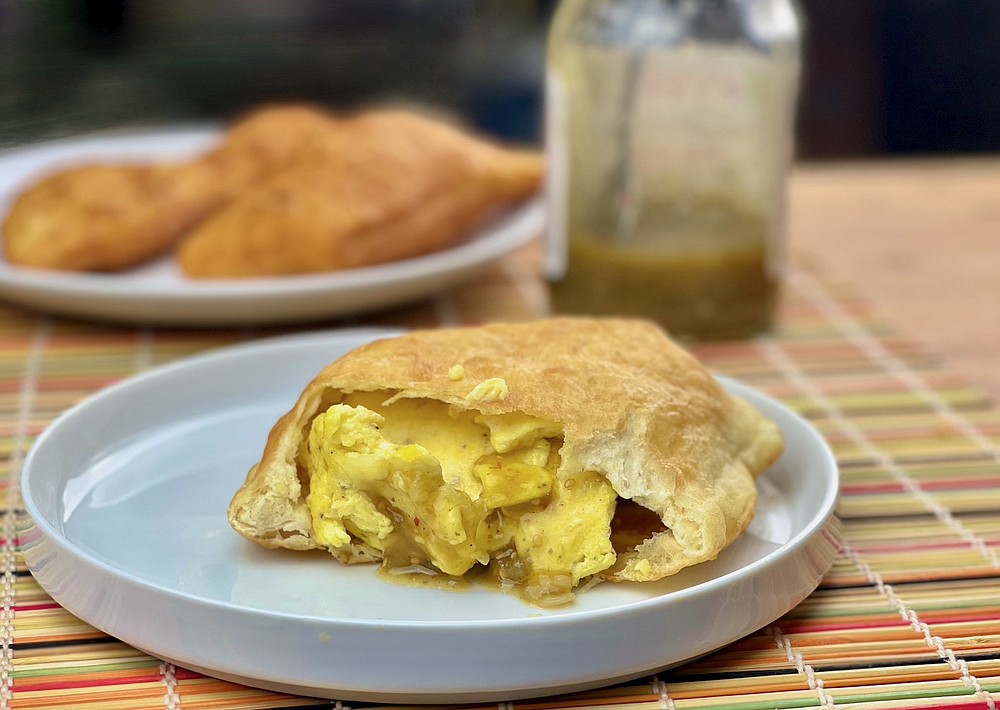 The “Modern Family” actor grew up in Albuquerque, N.M., and notes in the book that sopaipillas are believed to have originated there almost 200 years ago. “The great pride that the community has for this delicious pastry is proven by the fact that almost every New Mexican restaurant in Albuquerque serves sopaipillas as complimentary table bread,” he writes in the introduction to the sopaipillas chapter.

Sopapaillas are closely related to fry bread, with the major difference being who is making them. Fry bread is more often associated with Native American cuisine, while sopapaillas are more commonly regarded as Hispanic. The ingredients and cooking method are virtually the same, and both likely evolved to become what we know today through the availability of government commodity food supplements, with lard and wheat flour being staples. (For more about the history of sopaipillas in New Mexico, visit arkansasonline.com/421sopaipillas).

Despite their long history, the word sopaipilla/sopapilla with its current meaning didn’t appear in mainstream American media until around 1940. The first mention of sopaipillas (then spelled “sopapilla”) in the Arkansas Gazette was in 1967 by Food editor Harriett Aldridge. 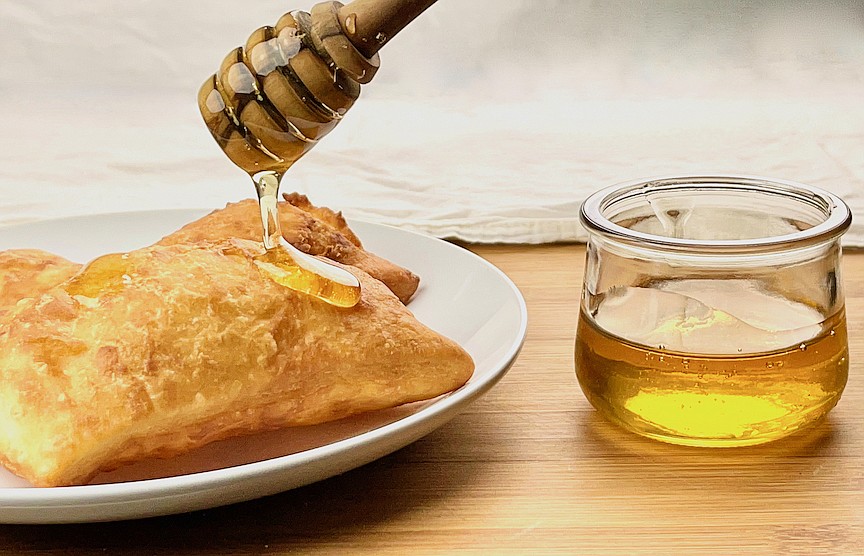 We prepared both Ferguson’s and Aldridge’s recipes. Both were delicious, but different.

The recipe Aldridge included in her column calls for shaping the dough into balls and then rolling it flat into rounds. It is a heavier dough — made with double the flour — than Ferguson’s. It is similar to fry bread, except it puffs and forms a pocket as it cooks, like a sopaipilla. Or it did for us about 50% of the time, depending on how thick we rolled the dough. Very thin dough produced flat and crispy breads that crackled when we bit into them. Thicker dough puffed and formed chewy pockets ideal for stuffing.

Ferguson’s recipe makes smaller, more tender breads that brown quickly thanks to the addition of sugar and milk in the dough. The touch of sugar in the dough was just enough to complement the spicy fillings, but not so much that a drizzle of honey or shower of cinnamon sugar made them too sweet. 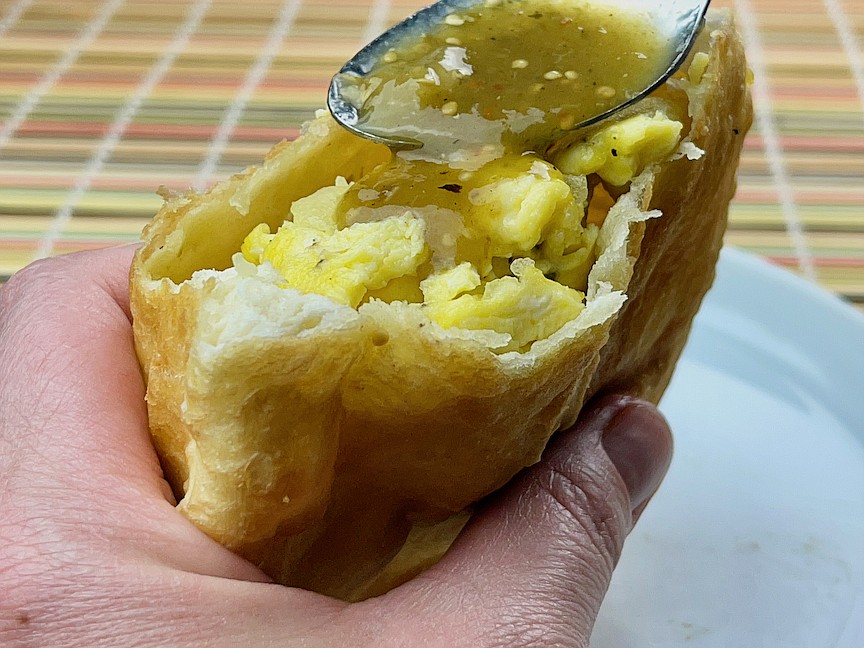 We stuffed and sopped and dipped and drizzled both versions. And honestly, we can’t pick one over the other. Vegans will prefer Aldridge’s recipe as it contains no dairy, but for the softest, fluffiest, puffiest dough pillows, Ferguson’s wins.

Sopaipillas are best eaten immediately after frying, but we found that you can revive day-old sopaipillas in the oven by heating them at 350 degrees for about 5 minutes.

We left Aldridge’s recipe in her words — some cooks may find her instructions to be sparse, but as this recipe was originally published when food columns were confined to paper, brevity was essential. We divided the dough into golf-ball size pieces, and it made 14 large (6-inch or so) breads. 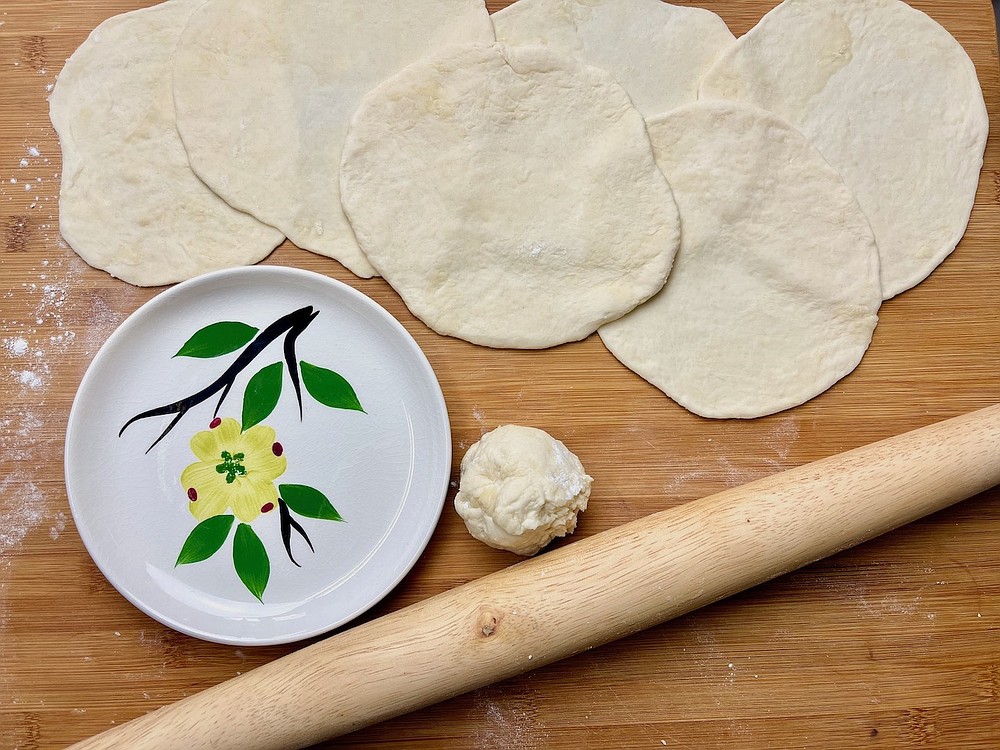 Knead well and let stand about 30 minutes before forming into round balls, which are in turn rolled 1/8-inch thick.

Fry the saucer-sized dough rounds in deep hot fat (365 degrees) until brown, dropping into the hottest part of the fat. Turn once. Drain. 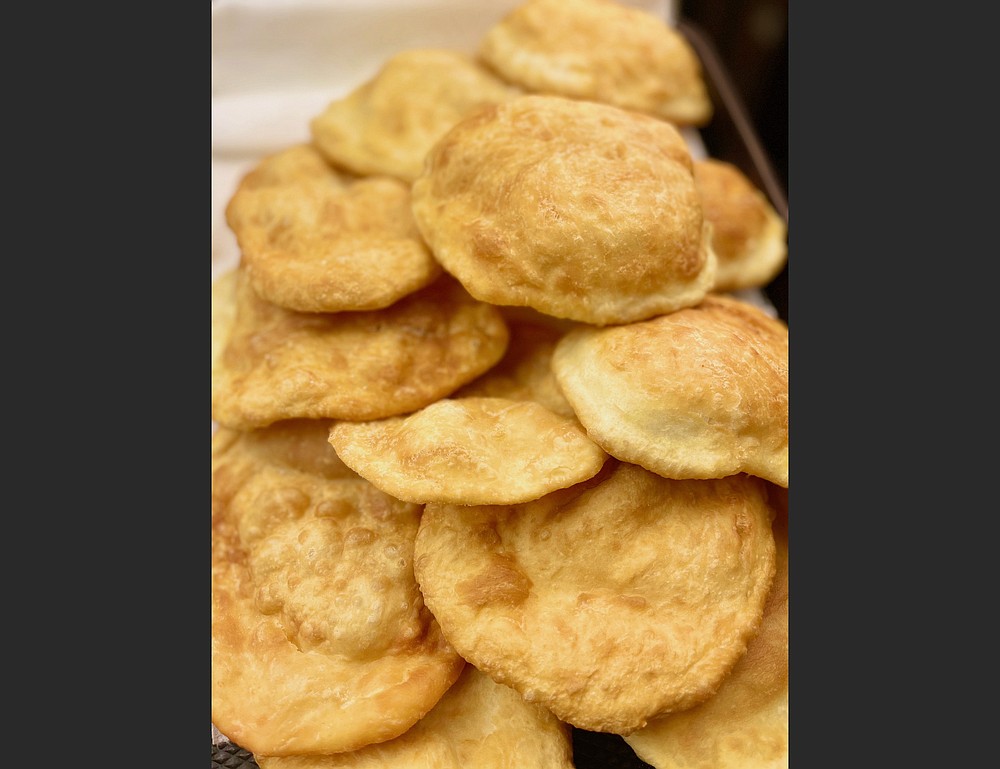 In a large bowl, whisk together the flour, sugar, baking powder and salt. Rub the shortening into the flour mixture with your fingers or a pastry cutter until the mixture resembles coarse meal. Stir in the milk. Turn dough out onto clean work surface and knead briefly (10 to 12 turns) to form a cohesive ball. The dough will be soft and slightly lumpy on the surface.

Wipe out the bowl and then lightly coat it with a little oil. Return the dough to the bowl, turn to coat all sides and then cover with plastic wrap and let the dough rest for 20 minutes.

Flour a work surface and then roll the dough into a 10-by-15-inch rectangle about 1/8-inch thick. Use a sharp knife or pizza cutter to cut the dough into 12 equal pieces (the book describes this as a “grid of 4 spaces in one direction and 3 spaces in the other direction).

Fit a large, heavy-bottomed pot or Dutch oven with a deep-fry thermometer. Pour in enough oil to reach a depth of 1 ½ inches. Heat the oil over medium-high heat to 350 degrees. Line a baking sheet with paper towels.

Working in batches of 3 or 4, gently lower the sopaipillas into the hot oil and fry, flipping once until golden and puffed, about 1 minute per side. Using a slotted spoon, carefully remove the sopaipillas from the oil and transfer to the paper-towel-lined baking sheet. Repeat with remaining dough. 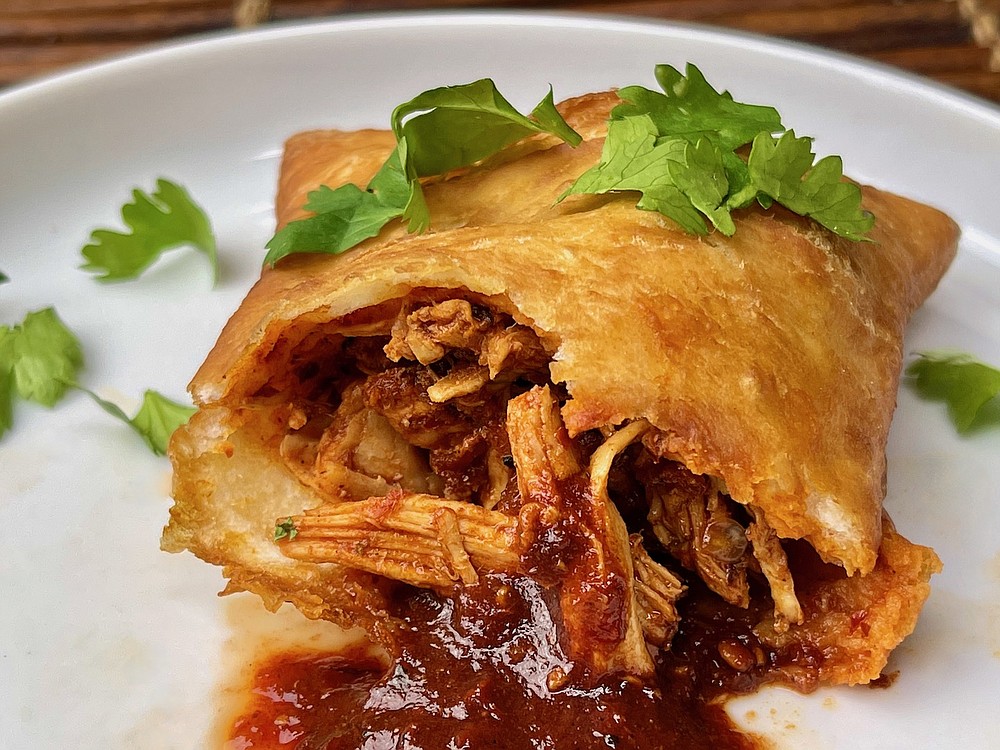 Season chicken with salt and pepper. Heat the olive oil in a Dutch oven or other large, heavy oven-safe pot, over medium heat until shimmering. Add the onion and season with a pinch of salt and saute until onion begins to soften. Add the garlic, oregano and cumin, and cook until fragrant. Add the chicken, the chile sauce and chicken broth, and stir to combine. The sauce should cover the chicken, if it doesn’t, add more broth. Cover pot with lid and bake 2 hours or until chicken is tender.

To serve, tear off one end or just a corner of a sopaipilla and fill it with a few tablespoons of the chicken and sauce mixture. Add any desired toppings.

Using kitchen shears, cut the stem end off each dried pepper and then cut in half lengthwise and brush out most of the seeds. Arrange the chiles on the baking sheet in a single layer and toast for 3 minutes or until puffed and fragrant. Transfer the chiles to a medium sauce pan with a lid. To the baking sheet, add the onion, garlic and tomatoes, and return it to the oven and roast for 20 minutes or until onion and tomatoes are softened and starting to char in spots.

Meanwhile, add the broth to the saucepan with the chiles and bring to a simmer over medium-high heat. Cover, remove from heat and let the chiles soften in the broth.

In a blender or food processor, combine the roasted onion, garlic and tomatoes along with 1 ½ teaspoons salt, the 2 tablespoons honey, the oregano and cumin. Carefully pour in the softened chiles and the soaking liquid. Blend on high speed until smooth. Taste and adjust seasoning if needed. Use immediately or transfer to an airtight container. Sauce will keep for about 1 week in the refrigerator or freeze for up to 3 months.

The perfect cinnamon to sugar ratio is a matter of personal preference. We’ve found 2 tablespoons per ½ cup of sugar to be our ideal for everything from cinnamon toast and coffee to fresh-from-the-fryer sopaipillas.

Combine cinnamon and sugar, and mix well. Transfer to a glass jar with a shaker top or other tight-fitting lid. Mixture will keep indefinitely, but the cinnamon flavor will fade after 6 months.