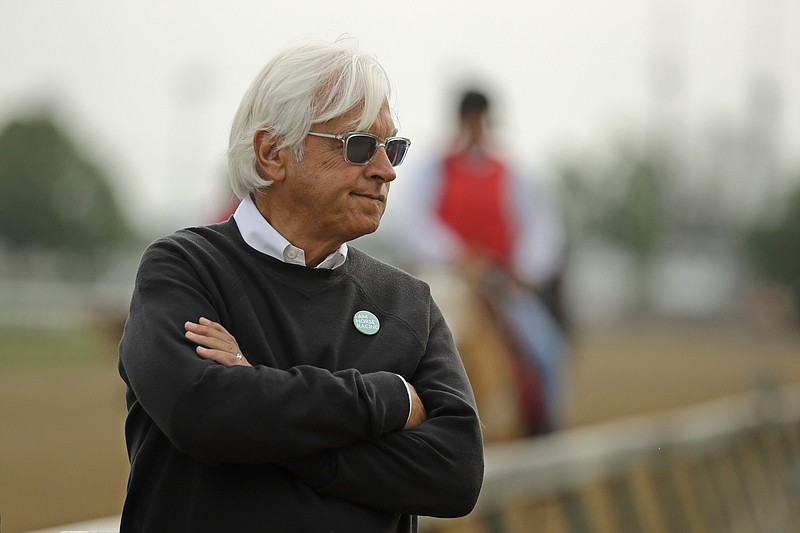 Hall of Fame trainer Bob Baffert watches his Kentucky Derby entrant Game Winner during a May 1, 2019, workout at Churchill Downs in Louisville, Ky. Baffert was in Hot Springs on Monday before the Arkansas Racing Commission, which was hearing his appeal of a ruling by Oaklawn stewards. Baffert was suspended for 15 days last year after two horses he trains tested positive for unacceptable levels of lidocaine. - Photo by Charlie Riedel of The Associated Press

The Arkansas Racing Commission met Monday to hear the first of two days of trainer Bob Baffert's appeal of a ruling by Oaklawn stewards.

On July 15, stewards ruled that two of the racehorses Baffert trains tested positive for a substance beyond the threshold of its accepted use after their races on the final day of the 202o season at Oaklawn.

The first hearing was held in a hotel owned and managed by Oaklawn Racing Casino Resort and recently opened on the resort's property.

Baffert was joined at the hearing by attorneys Craig Robertson and Steve Quattlebaum.

Baffert, the trainer of two Triple Crown champions and a member of the National Museum of Racing and Hall of Fame, was suspended by the Arkansas Racing Commission for 15 days after 3-year-old colt Charlatan and 3-year-old filly Gamine each tested positive for lidocaine -- a common ingredient in pain medicine for mammals, including horses and humans -- after they raced at Oaklawn on May 2 in the Arkansas Derby and an optional-claiming race, respectively.

"Let me be clear about something from the beginning. I am not asking you to treat Bob Baffert any better than you would any other trainer. What I am asking is that you not treat him any worse."

Charlatan's owners were represented by attorney Justin Allen of Sheridan.

An acceptable threshold for use is 20 picograms, or 20 trillionths of a gram. Gamine's tested blood level was 185.4 picograms and Charlatan's 46.1 picograms.

Each of the seven ARC commissioners, including Chairman Alex Lieblong of Conway, were at the hearings for testimony from eight people on the first day. The eight were the Arkansas State steward Bernie Hettle; ARC veterinarian Joe Lokanc; Oaklawn test barn collectors Ann Pinkerton and Larry Spraker; and employees of testing facilities Truesdail Laboratories and Industrial Testing Laboratory Services. Each of the testers or test-site administrators testified by way of Zoom.

Most of the day's testimony involved concerns about the chain of custody of samples express-mailed to the testing facilities and the method by which those samples were obtained. Robertson introduced the former in his opening statements for Baffert.

The chain-of-custody issue for Robertson concerned the contract with Truesdail to test samples sent from Oaklawn. When Truesdail lost its accreditation to test racehorse samples in March 2020, it subcontracted Industrial Testing Laboratory Services to conduct those tests. Oaklawn sent a total of two sealed containers of the samples in question to Truesdail, but when Industrial received the samples from Truesdail, they were in three containers.

"There was no documentation (of that exchange)," Robertson said.

That was later confirmed by testimony presented by representatives from Truesdail and Industrial.

"There must be a clear and unbroken chain of custody from the moment samples are taken in the test barn through the moment the testing lab actually tests those samples," Robertson said. "Every step of the way must be documented."

Freeland said there was no chance the samples were contaminated, and witnesses from the testing facilities said they found no evidence contrary to Freeland's contention. They each spoke of the ways by which the samples were sealed to support their testimony.

Robertson also questioned the potential competitive value of lidocaine for a racehorse and the likelihood a horseman would use it to gain an advantage in a race.

Baffert did not attend races at Oaklawn in 2020 but was represented by his top assistant Jimmy Barnes when horses from Baffert's barn raced there. However, Baffert is deemed responsible for rules infractions regardless.

Baffert and Barnes have stated before the hearing that the only potential source known to them of lidocaine in their barn at Oaklawn was a pain-relief patch Barnes wears and wore the week of the 2020 Arkansas Derby for a chronic back injury. Those statements were introduced in the hearing.

Baffert is expected to testify today.