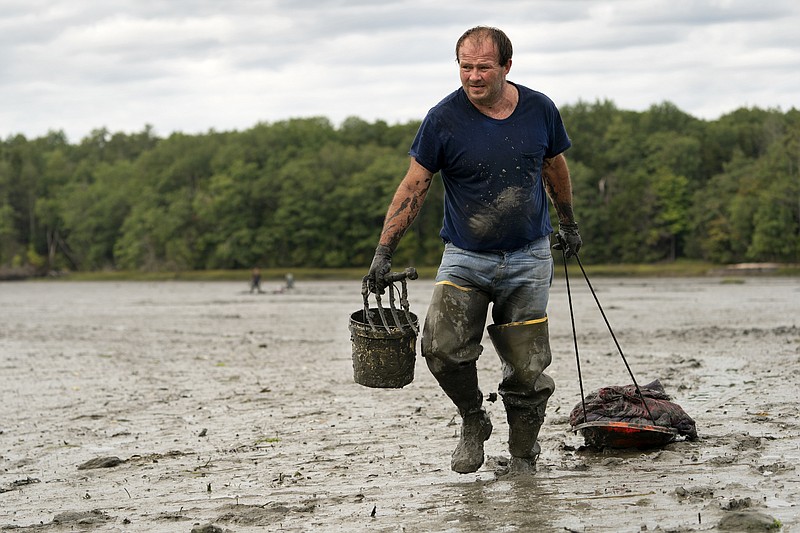 FILE - In this Sept. 3, 2020 file photo, clamdigger Mike Soule hauls bags of clams on a sled across a mudflat in Freeport, Maine. More New Englanders have dug in the tidal mudflats during the last year, but they're finding fewer clams. The coronavirus pandemic has inspired more people in the Northeastern states to dig for the soft-shell clams. (AP Photo/Robert F. Bukaty, File)

PORTLAND, Maine -- Chad Coffin has spent the coronavirus pandemic much as he has the previous several decades: on the mudflats of Maine, digging for the clams that draw tourists to seafood shacks around New England.

But he's running into a problem: few clams.

"There just isn't the clams that there used to be," Coffin said. "I don't want to be negative; I'm just trying to be realistic."

It's a familiar problem experienced by New England's clamdiggers. More New Englanders have dug in the tidal mudflats during the past year, but the clams aren't cooperating.

The pandemic has inspired more people in the Northeastern states, particularly Maine and Massachusetts, to dig for soft-shell clams, which are also called "steamers" and have been used to make chowder and fried clams for generations. The era of social distancing is conducive to the often-solitary work, said Coffin, president of the Maine Clammers Association, which represents commercial clammers.

But the U.S. haul of clams has dipped in recent years as the industry has contended with clam-eating predators and warming waters, and 2020 and early 2021 have been especially difficult, industry members said.

In Maine, the largest clam-producing state, fishermen last year produced their lowest haul in more than 90 years, at a little more than 1.3 million pounds. Nationwide totals aren't compiled yet, but Maine's haul typically accounts for more than half the U.S. total, and hauls in other clamming states such as Massachusetts, Rhode Island and New York have been trending downward in recent years.

The lack of clams has contributed to higher prices for consumers, said Coffin. It has also sparked fears that future generations of clams will be even smaller in number, he said.

"A few of the guys who are clamming are making good money now, but they're basically selling their future," Coffin said. "The resource keeps diminishing."

The clamming industry has had to contend with more marine predators such as green crabs and milky ribbon worms in recent years. Scientists have said the predators have been encouraged by the warming waters of key habitats such as the Gulf of Maine, which is one of the fastest-warming bodies of water in the world.

The shortfall has coincided with a time of high demand for clams, and that has served to increase prices. Soft-shell clams are often selling for about $7 per pound at retail, which is about 40% more than normal and a surprisingly high number for spring, Coffin said. Demand is usually highest in summer.

Soft-shell clams were the second-most valuable species, after lobsters, in Maine last year, state records show. The clams were worth about $15.7 million at the docks, a competitive total with recent years, and $2.39 per pound, which was the second-highest figure in recorded history.

The prices are rising because of factors such as interest in local food during the pandemic and a limited supply on the market, said Brian Beal, a professor of marine ecology at the University of Maine at Machias whose research focuses on shellfish. The bump in price is nice for clam harvesters in the short term, but the long-term problems are a major threat to the fishery, he said.

"It's interesting that the demand is still there for soft-shell clams, and that demand is driving that price, and that is driving people to go collect clams," Beal said. "We still have to look at the historic trends. One way of looking at it is they were the lowest in a long time."

The lack of clams has been a problem for commercial and recreational clammers alike. The predator crabs, which originated in Europe, are also a problem for hobby clammers on Cape Cod, said John Townes, president of the Barnstable Association for Recreational Shellfishing.

"They're a horribly invasive species," he said. "They're big predators."