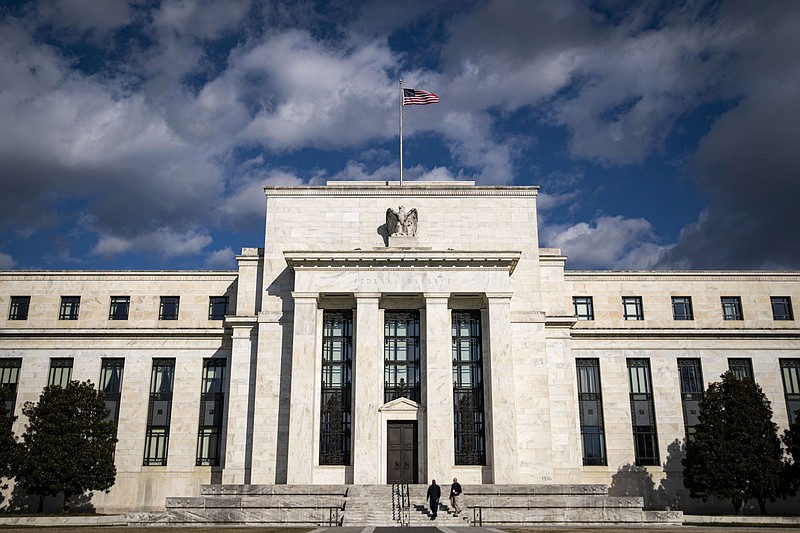 People walk towards an entrance to the Marriner S. Eccles Federal Reserve building in Washington, D.C., on Jan. 22, 2021. MUST CREDIT: Bloomberg photo by Al Drago.

While rising prices are in the spotlight now as the economy reopens and demand surges, the longer-run trends that have suppressed costs globally could re-emerge as the pandemic ends, some policymakers warn. That would make it harder to deliver on their new strategy of running inflation above their 2% target for a time in order to achieve that goal in the long term.

"We are probably more likely to be successful with the new monetary policy regime than if we didn't have it," Boston Fed President Eric Rosengren said in a Bloomberg News interview last week. But based on the experience of the past decade "you have to take seriously the idea that it is not going to be that easy to get 2% inflation."

Policymakers at the central bank have been pressed in recent weeks about whether an expected spike in prices -- as the U.S. rebounds from pandemic shutdowns -- will be a temporary blip or something more permanent and dangerous to the economy after a wave of unprecedented monetary and fiscal stimulus over the past year.

For years, major economies including the U.S., Japan and the euro zone have struggled to raise inflation to 2% despite aggressive monetary policy actions. Aging populations, the impact of new technology and the disinflationary force of globalization are not things central banks can wish away, while rates stuck at zero -- or below -- telegraph the limits of their power.

Inflation pessimism shows up in forecasts released by Fed officials' at their March meeting as well. Even after taking account of the passage last month of President Joe Biden's additional $1.9 trillion stimulus package in their forecasts, more than half of the 18 Fed officials estimated inflation would be around 2% or slightly below next year. A majority also forecast prices in a range of 1.9% to 2.2% for 2023.

On the other hand, a sharp jump in consumer prices last month is a reminder that the risks are two-sided. Both goods and services prices rose last month with the consumer price index rising 0.6% after a 0.4% gain in February as the end of pandemic lockdowns drove up the cost of gasoline, car rentals and hotel rooms, according to data released Tuesday.

Rosengren said the Fed has never tried to shift to a new policy regime while exiting a pandemic amid aggressive fiscal stimulus. "We have to be pretty humble about how confident we are about what the inflation outcomes are going to be," he said.

Some indicators of longer-run inflation are starting to move higher, a sign that the Fed is at least getting the public's outlook pointing in the right direction. The rate on the five-year, forward swap contract for consumer-price inflation is hovering around 2.4%.

That is up from a low last year of just under 1% during the peak pandemic lock down period. When adjusting for measurement differences between CPI and the Fed's preferred measure -- the personal consumption expenditures price index -- it puts longer-run inflation pricing in at just a touch over the central bank's 2% target.

However, some market watchers -- like Fed policymakers -- see an enduring rise in inflation as a challenge.

Interest-rate derivative markets don't foresee the Fed lifting its policy rate beyond about 2% during the upcoming tightening cycle. That's below the 2.5% Fed officials forecast last month for their long-run policy rate. This backdrop signals that traders don't see much risk of inflation unmooring or growth getting too robust before the next downturn.

"We are looking for a core CPI running closer to 1.9% or so," after temporary base effects filter through the data, said Phoebe White, interest-rate strategist at JPMorgan Chase & Co. "That's still pretty soft and we think the underlying trend in inflation is going to be pretty gradual to build as we look into 2022."

There are a range of forces that are likely to keep inflation low from the Fed's perspective, including the millions of still-unemployed Americans. Slow changes in pandemic behavior -- even as vaccines roll out -- weak wage-bargaining power and an aging workforce could also keep overall demand moderate and prices muted.

"We are of the view that we are going to continue to be in a lower inflationary environment both in the U.S. and globally," said Steven Oh, head of fixed income at PineBridge Investments. "We are not necessarily going to be successful in reaching inflation targets on a sustainable basis."

The Fed also has limited tools. In its recent statement, the Fed pledged to keep rates at zero until "inflation has risen to 2% and is on track to moderately exceed 2% for some time."

But a pledge to do nothing also raises questions about the potency of policy. The U.S. central bank has a legacy of missing its 2% inflation target consistently since it was installed in 2012."Really it's about changing peoples' mindsets and experience for the last ten years," said Tiffany Wilding, economist at Newport Beach, California-based Pacific Investment Management Co."You are going to need several periods, maybe several years, of inflation that is running above the Fed's 2% target to really anchor those expectations, because they have moved down."