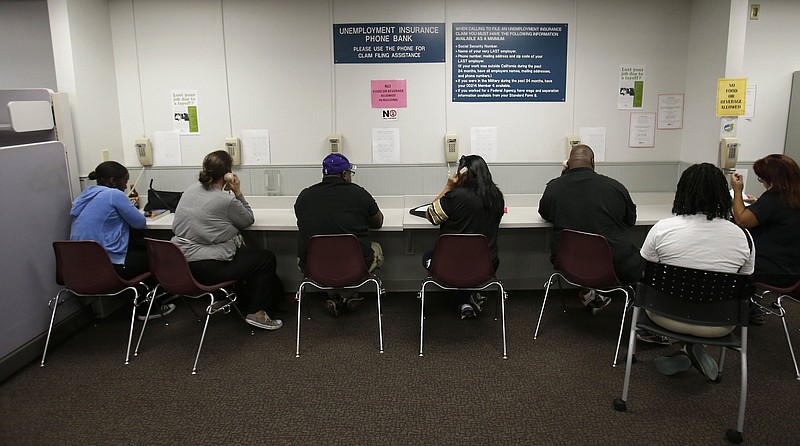 WASHINGTON -- Senate Democrats on Wednesday unveiled a new proposal to overhaul the country's unemployment insurance system, hoping to modernize the benefits -- and add more money to millions of Americans' weekly checks -- in the aftermath of the pandemic.

The new draft legislation put forward by Sens. Ron Wyden, D-Ore., and Michael Bennet, D-Colo., seeks to address the financial hardships that many families experienced over the past year, as the coronavirus left a record number of people out of work and struggling to obtain aid amid the worst economic crisis in a generation.

Under the Democrats' proposal, Americans could more quickly apply to their states for joblessness assistance. Their checks may be much larger as well, allowing many low- and middle-income workers to receive up to 75% of the wages they earned when they had stable employment.

In total, these workers would be eligible to obtain at least 26 weeks of unemployment aid if the new legislation becomes law. But they also would stand to collect additional sums -- and do so over longer periods of time -- in the event the country faces another major downturn or public-health emergency. The bill includes additional help for part-time workers and those who drive for Uber, deliver for Grubhub or otherwise participate in the gig economy.

For Wyden and Bennet, the new standards seek to replace what many Democrats see as an unworkable, outdated system that experienced immense strain during the pandemic, forcing millions of Americans to wait weeks in some cases to receive much-needed aid.

States currently have great latitude to determine how much they pay in unemployment support and for how long, creating disparities that leave out-of-work Americans in some parts of the country in dire financial straits. In 13 states, for example, the average weekly unemployment benefit is lower than the amount needed to remain above the 2020 poverty line, according to an analysis from the Government Accountability Office, which studied the system in September.

"Too many unemployed folks, people who are laid off through no fault of their own, are getting a benefit that leaves them unable to pay rent and unable to pay for groceries," Wyden said.

Historically, congressional Republicans have chafed at expanding unemployment payments, believing it deters people from returning to work. But Wyden and Bennet maintain that they have an opportunity to advance their changes as part of Democrats' broader rethinking of the country's safety net programs.

President Joe Biden is set to unveil a multitrillion-dollar proposal in the coming weeks that aims to provide new aid to workers, parents and children facing financial hardship. Wyden and Bennet said they have already encouraged Biden to overhaul unemployment insurance as part of that package, which has been dubbed the American Families Plan.

The White House did not respond to a request for comment.

The new push around unemployment benefits comes a year after the arrival of the coronavirus sent the economy into a tailspin -- and brought the country's unemployment system to its brink. Millions of Americans suddenly laid off found themselves for the first time applying to receive weekly support, only to encounter lengthy delays in receiving their first checks.

Nationwide, staffing shortages in local unemployment offices and technical glitches with their old computer systems delayed families from receiving money for months. Many states struggled at the time to implement a stimulus program that paid Americans an additional $600 on top of what they would have normally received. Similar hurdles prevented Uber drivers and other gig-economy workers from collecting federal benefits as well, as years of neglect left state unemployment unequipped to implement a new program in the midst of an economic crisis.

Democratic lawmakers say many of the lapses might have been avoided if Congress had more thoroughly upgraded the unemployment insurance program long before the coronavirus took root.

Party leaders had tried to encourage such updates more than a decade earlier as part of the stimulus plan they adopted in response to the 2009 recession. But only some states ultimately adopted changes to better assist workers at the time, and dozens of others -- particularly under Republican leadership -- scaled back benefits dramatically as their economies began to improve.

"We dangled some incentives to states to make improvements, but few did," Bennet said. "States turned around and cut the number of weeks and benefit replacement rates, leaving workers worse off. We just don't want to see that happen again."

Roughly a dozen years later, some states once again are eyeing significant reductions to their unemployment programs as the economic crunch of the pandemic begins to ease. Republicans in Tennessee, for example, are debating a bill that would roughly halve the number of weeks that out-of-work state residents can collect aid. Fearing other states may follow suit, Democrats in Washington said they are emboldened to rethink the system from the ground up.

The new bill from Wyden and Bennet aims to set a new floor for benefits, extend the number of weeks that people can be eligible for aid and tie potential boosts to the program to national economic indicators, including the country's unemployment rate. Widespread job losses -- or public health emergencies -- could trigger higher payments or as many as 52 weeks of extended unemployment support under the legislation.

If states refuse to implement the new minimum requirements, they essentially could face penalties, as local employers are at risk of losing federal credits that typically help them offset the taxes they pay to fund the unemployment insurance program. Wyden and Bennet say they are eyeing further changes to the way the United States government finances the unemployment insurance program.

The new proposal also seeks to provide a clearer path to unemployment benefits for part-time workers, who often struggle to apply and obtain adequate weekly aid. And it sets up a new program, called a Jobseeker Allowance, to help those who do not qualify for unemployment -- including those who are new to the workforce or are self-employed, like the many Americans who participate in the gig economy. The program builds on the initiative targeting gig-economy workers adopted earlier in the pandemic.

In seeking to set out new standards, Wyden and Bennet said they hoped to avoid the constant haggling over the size and duration of benefits -- debates that sank past coronavirus stimulus deals as Democrats and Republicans warred over the need for more funding. With narrow yet powerful majorities, they stressed party lawmakers had an opportunity to adopt the sort of changes that have eluded them for years.

"Congress has gone through two recessions with an outdated, broken-down unemployment system, and enough is enough," Wyden said. "Congress muffed it after the first recession, and we are determined that this not be muffed again."