As families fall through cracks, community rises to catch them by SARAH E. KOMAR, Special to NWA Democrat-Gazette | April 15, 2021 at 1:00 a.m. 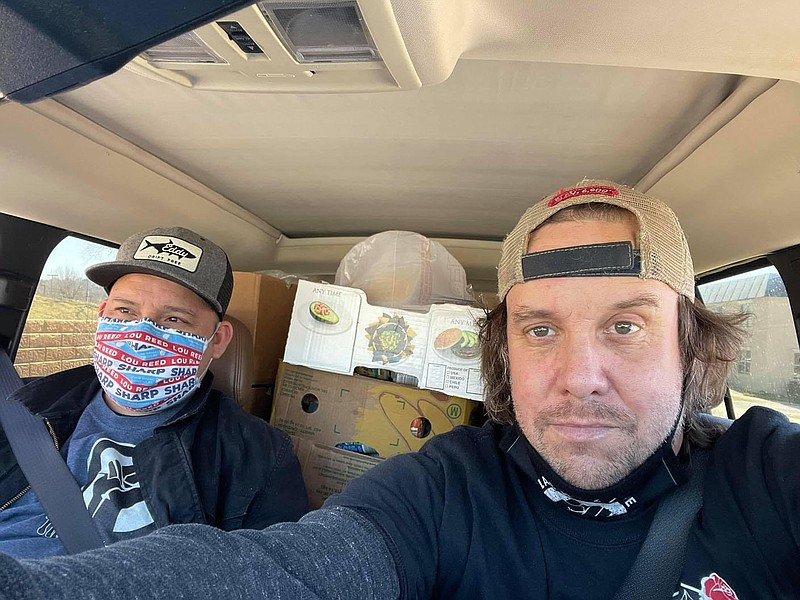 When Candace Green lost her job to pandemic-related cutbacks in October, she felt scared and alone. The 45-year-old single mother has little surviving family, and her paycheck was the only source of income for her and her daughter, who was 17.

Green hoped she could find some relief through government assistance. Then, her application for the federal Supplemental Nutrition Assistance Program (food stamps) was denied in November, and she was told it would be months before her unemployment application was processed and she could start receiving payments -- assuming she even qualified.

"I was told at that time that it would be 14 weeks before my case would even be looked at, because that's how backlogged they were," Green said. "And then, once it's looked at, it could take up to six weeks to start receiving any kind of benefits. Honestly, I just started crying when she told me that ... but there was nowhere for her to guide me."

As Green sent resumes to 138 potential employers and fell behind on her rent and car payments -- in spite of working three part-time cleaning and retail jobs -- she felt increasingly hopeless. But one day, desperate and not knowing where to turn, Green looked to social media and found a saving grace in an unexpected place: a Facebook group of Northwest Arkansas neighbors who would soon change her life.

A Columbia University study published in October 2020 revealed that the U.S. poverty rate increased from 15.3% in February to 18% in September, while the rate of deep poverty increased from 6.4% to 8%. Amid one of the worst economic crises in U.S. history, millions have found themselves on months-long waiting lists for unemployment insurance, SNAP benefits, rental assistance and other aid provided by governments or local nonprofits. Others don't qualify for such assistance, or they need additional help to make ends meet.

In response, some communities have banded together to form mutual aid networks, via which residents provide whatever direct assistance they can to their neighbors and ask for help when in need. These communities often carry unofficial slogans such as "solidarity, not charity," and "take what you need, leave what you can."

Green was fired from her job in the medical records department of Washington Regional Medical Center when the contractor she worked for laid off employees in response to low numbers of elective procedures at the hospital.

She applied for unemployment benefits the same month. Even if she had been able to wait out the long processing delays, obtaining her part-time jobs quickly made her ineligible for benefits, Green said. She was denied SNAP benefits because her last pay stubs, her most recent proof of income, showed pay too high for her to qualify.

Green turned to two Facebook groups, "Y'ALLIDARITY! -- NWA Mutual Aid" and "West Fayetteville Mutual Aid," members of which donated the money she needed to pay her December rent and maintain the emergency payment plan she had arranged with her landlord. Members also guided her to her closest "little free pantries" and to a local food bank, which helped her save on groceries.

Green said the community assistance helped relieve some of the stress she had experienced from worrying how she would support her child.

"(My daughter) could see and understand the emotion I was going through," Green said. "She has a part-time job, so she would bring over stuff to eat, or offer to help me with bills, which, as a mom, breaks your heart. I told her to spend it on herself; let me figure out the adult stuff."

Most families and individuals who request help from Johnson are facing unemployment, reduced work hours or other pandemic-related financial struggles, she said. Many are in a sort of aid gap, having not yet received government benefits or assistance from traditional nonprofits, or needing additional funds to supplement what they have received.

"A lot of ... people are in the middle," Johnson said. "Meaning they've applied (for assistance) but they don't have (it) yet. Or they had (it) before, and there was some kind of issue with the group they were working with. Like, if it was food stamps, there was a typo somewhere, and they got booted out, and so now they have to wait three weeks to get back in. That's a common theme for many."

Springdale resident Thomas Tulensa, 36, is familiar with both sides of the mutual aid coin. When the video producer and promoter had to quarantine for two weeks, he and his wife struggled to feed their three young children.

Tulensa contacted Walt Kelly, who in late 2020 began organizing The People's Pantry NWA, a grassroots food delivery service funded by community donations. After Kelly delivered food to Tulensa's family, and they discussed the food insecurity he had witnessed in Northwest Arkansas, Tulensa decided to join his direct assistance efforts.

Tulensa, a member of the Springdale Marshallese community, has provided a critical bridge to that community, which has been decimated by the covid-19 pandemic, Kelly said. He produces videos for PPNWA, publicizes the group's mission to his substantial Marshallese social media following, and encourages his more stoic neighbors to not avoid asking for help.

"There are a lot of foundations and organizations out there. They even have them for Marshallese," Tulensa said. "But the thing is, Marshallese don't reach out, because a lot of (them) are shy. This is our culture -- we tend to hide our problems."

Almost every day, Marshallese residents message Tulensa asking for help, and he refers them to Kelly. Since he began working with PPNWA, an estimated 50% of people the organization responds to are Marshallese, Tulensa said. After experiencing food insecurity first-hand, he feels grateful to have a chance to meet the needs of others in his community.

Green, too, is getting back on her feet. In late January, she got a full-time job at PeopleReady, a Fayetteville temp agency. She is "still playing catch-up" on her rent and car payments and has kept one of her part-time jobs for extra income. Despite balancing responsibilities, Green makes time to help others in her community with whatever mutual aid she can provide.

She posts PeopleReady job opportunities in Facebook groups. During the snowstorm that swept the South the week of Feb. 14, she helped Johnson and other volunteers provide hot, home-cooked meals to those in the Fayetteville Salvation Army emergency shelter. She plans to contribute further as she becomes more financially stable and hopes to stay involved in the mutual aid movement after the pandemic ends.

"If it wasn't for people who did that for me, I would be absolutely lost," Green said. "So I would absolutely love to just give someone else the peace of mind that I received from these groups." 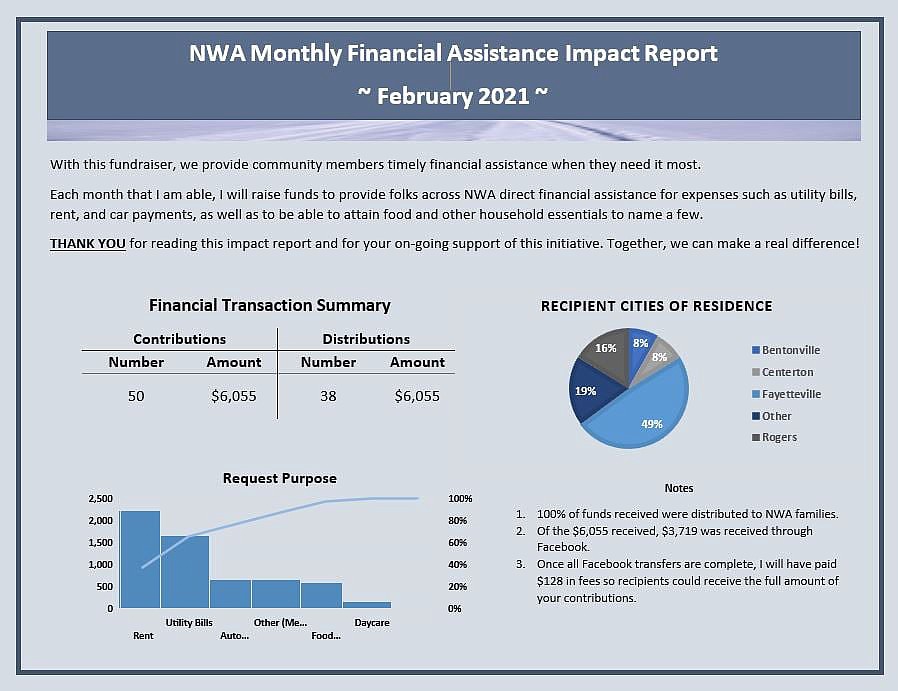 Each month, Alicia Johnson organizes a Facebook fundraiser, distributing all donations to community members who request assistance with food, medical bills, utility payments and more. Starting with February’s fundraiser, she now posts a monthly breakdown of donations and distributions (seen here) to the “Y’ALLIDARITY! — NWA Mutual Aid” Facebook group. Johnson hosted her first fundraiser in December. In an 11-day period, locals donated $11,000 and a church donated $20,000 to her efforts, and mutual aid volunteers helped her distribute the funds via money transfer apps to 85 individuals and families. (Courtesy Infographic/Alicia Johnson) 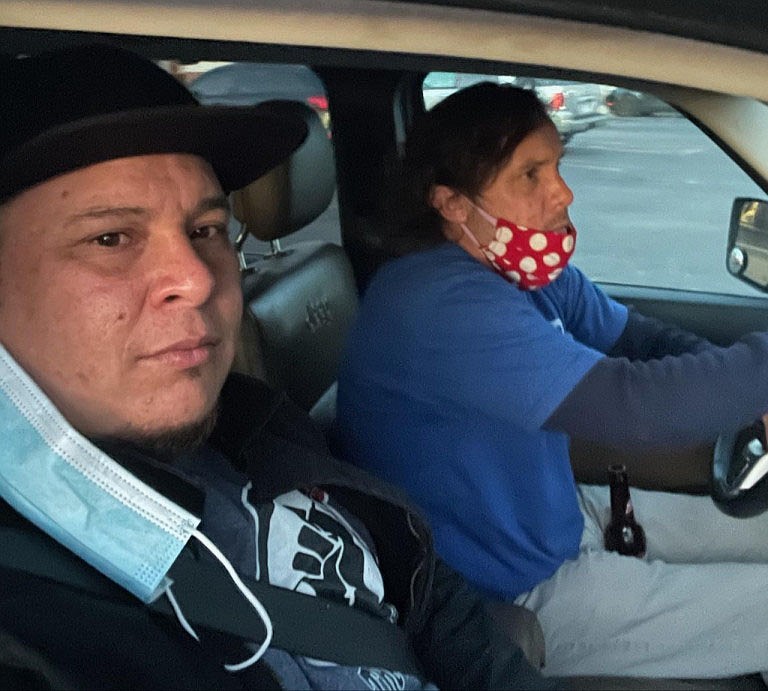 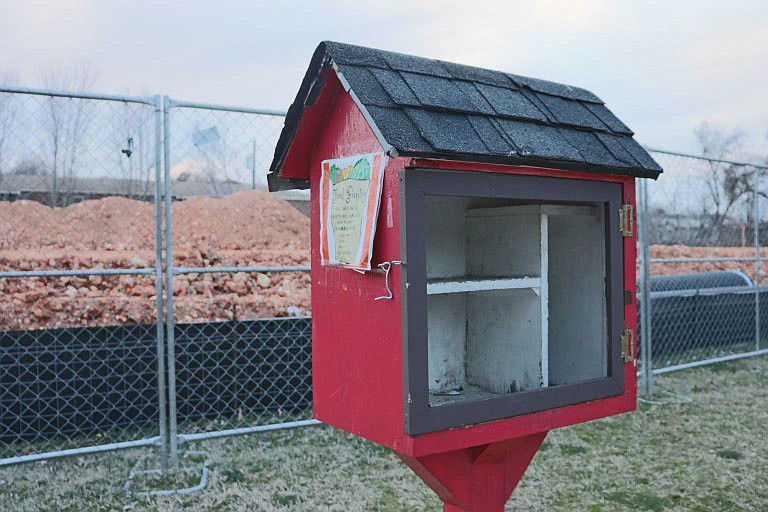 A “little free pantry” near the corner of North Avenue and the Razorback Greenway stands empty on March 4, 2021. Such pantries, which have a “take what you need, leave what you can” system, have cropped up across the U.S. in recent years. Throughout the covid-19 pandemic, some participants in the Northwest Arkansas mutual aid movement have made a routine of stocking them as they become empty, which can happen in just hours. Members of Facebook groups such as “Y’ALLIDARITY! — NWA Mutual Aid” keep each other apprised of the status of the pantries around the region and what staples are needed to replenish each. (Courtesy Photo/Sarah E. Komar) 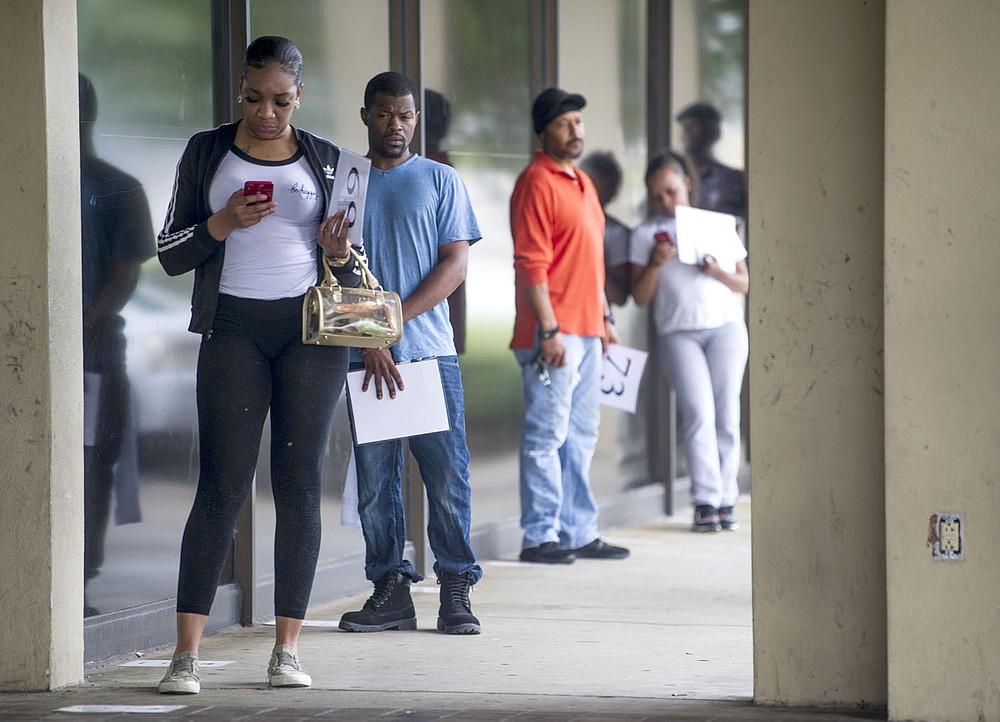 Applicants wait in line to file for unemployment in May 2020. Many who found themselves without jobs during the pandemic waited months for their unemployment applications to be processed and even longer to receive any money, sending them to search for other ways to keep their families housed and fed. For some, mutual aid organizations were the answer. (Arkansas Democrat-Gazette file photo)
ADVERTISEMENT