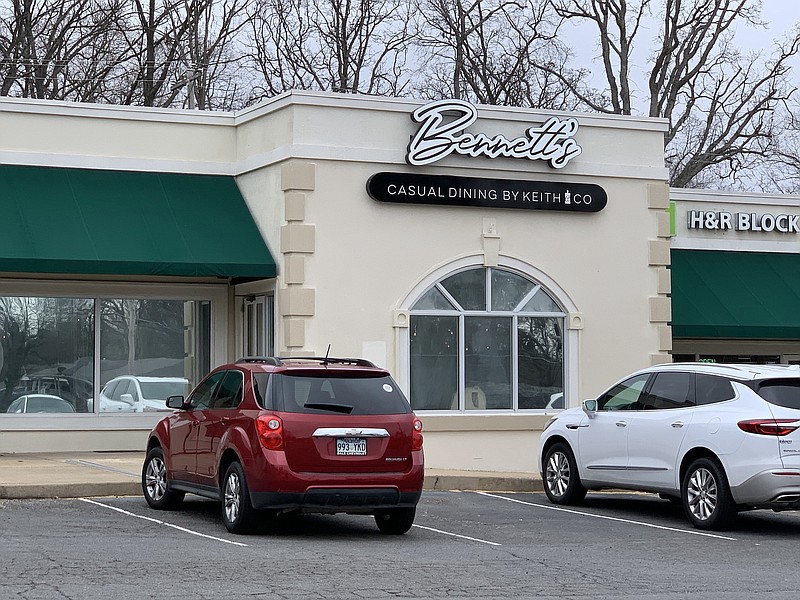 Dockside Bar & Grill has opened in the former Markham Street Grill and Pub, 11321 W. Markham St., Little Rock. Co-owners are Jake Roy and veteran restaurateur Scott Marks (Bella Italia, Mango Tango, Union Bistro). Marks says the menu will focus on steaks, seafood, fresh-ground-in-house burgers and smoked-in-house meats, with appetizers he introduced at Union Bistro and some of Bella Italia's pasta dishes. The decor, he says, has an "Arkansas lake- and river-theme." The place will offer live music Friday and Saturday nights to start, plus an open mic night; also dart boards and "ample TVs for sports," according to the Facebook page (facebook.com/docksideLittleRock). Hours are 4-11 p.m. Monday-Thursday, 4 p.m-2 a.m. Friday, 4 p.m.-1 a.m. Saturday and 4-10 p.m. Sunday. The kitchen closes an hour before the bar. The phone number is (501) 379-9367.

Up the street a bit, we still have not heard from Jody Thornton, owner of the Fayetteville-based JJ's Grill mini-chain, regarding the reopening of the Little Rock outlet at 12111 W. Markham St. But its Facebook page (facebook.com/jjslittlerock) contains a clue: "Not yet, but soon," in response to a patron's query. The listed phone number — (501) 891-6769 — continues to return a "disconnected" recording and the website, jjsgrill.com, still lists it as "temporarily closed."

According to its Facebook page (facebook.com/BennettsDining), Bennett's, now going by Bennett's by Keith & Co, opened Tuesday in the longtime home of Zaffino's, 2001 E. Kiehl Ave., Sherwood. It's connected, as the name implies, to Keith & Co Artisan Sandwich Shoppe, 9B Crestview Plaza, Jacksonville. Owner Darin Keith told us a few months ago that the new place will offer counter service for lunch and, eventually, casual sit-down dinner service with a menu focusing on steak, fish and pasta. At least for this week, hours are 10:30 a.m.-2:30 p.m. Tuesday-Friday. The Facebook page provides a phone number — (501) 392-8530 — but we were unable to even get it to ring by deadline.

We're still looking for a target opening date for Restaurant Bar Mar y Tierra, 1900 W. Third St., Little Rock, but we've been watching the construction process closely. The name has expanded, to Restaurant Bar Mar y Tierra Seafood & Grill, and so has the restaurant, which instead of just occupying the eastern half of the brick building, has extended westward into the other half of the building that had previously been a liquor store, undoubtedly one reason it has taken so long to complete the restaurant. Recent outside work has involved replacing a patch of asphalt on the building's west side and reconstruction of the western wall. There is now a website — restaurant-bar-mar-y-tierra-seafood-grill.business.site — with a map and tentative operating hours: 11 a.m.-10 p.m. Monday-Thursday, 11 a.m.-1 p.m. Friday-Saturday, 11 a.m.-9 p.m. Sunday. And, though there's nothing on it yet, there's a Facebook page: facebook.com/MaryTierra LittleRockSeafoodandGrill.

We're still waiting to find out who the new tenant is for the former Blue Sail Coffee space in the Little Rock Technology Park, 417 Main St., Little Rock. Tech Center Executive Director Brent Birch was expecting to reveal it at a March 10 board meeting, but now says he can't release the information until a lease has been signed, which it hasn't. We're keeping an eye on the situation.

The Capital Hotel, 111 W. Markham St., Little Rock, closed since the beginning of the pandemic, is beginning to show signs of life. Concord Hospitality Enterprises, which manages the hotel for the Stephens family, is hiring what appears to be an entire staff. Via the website careers.concordhotels.com/jobs, the openings are sprinkled, with no apparent rhyme or reason, through 54 pages detailing jobs at hotels the company manages across the country. We gave up on Page 21, but by then we'd run across openings for banquet server, restaurant server, cook, lounge bartender, restaurant supervisor, dishwasher, restaurant host(ess), restaurant manager, sous chef and executive chef. (Also: housekeeper/room care, laundry attendant, account clerk, sales manager, general manager, houseperson, front desk clerk, sales coordinator, maintenance tech, accounting manager. Doubtless there are others.)

The executive chef, according to the listing, "will oversee two state-of-the-art kitchens (One Eleven at the Capital and the Capital Bar & Grill) providing elevated dining experiences to our guests." Duties include: "Directly supervises the culinary department heads, including the Executive Sous Chef, Pastry Chef and Banquet Chef and approximately 30 employees. Responsible for the overall management and operations of all food and beverage outlets and events at the hotel. This role is responsible for ensuring the highest standards and consistency of food handling, quality and presentation."

The previous executive chef, the internationally acclaimed Joel Antunes, "retired" in mid-January 2020, deciding to "move on" — though we have not yet heard to where. A month or so later, the hotel announced it had hired, but was not naming, a new executive chef, and while he was supposedly in the process of "getting his organization situated," including a new menu, the hotel closed in March. Evidently that successor has not stuck around in the interim. We were unable to get through to the hotel's main phone number, (501) 374-7474 for clarification.

And speaking of restaurant jobs, we mentioned last week that restaurants around the area are desperate to hire as more and more people, vaccinated or otherwise, are venturing out and dining in. Among them; Bruno's Little Italy, 310 Main St., Little Rock, which needs a few line cooks. Call (501) 554-2526.

And still speaking of restaurant jobs, the Little Rock Convention & Visitors Bureau, celebrating its "50+1 Anniversary" while envisioning the approaching end of the pandemic, is hosting the Big On Little Rock Hospitality Industry Job Fair, 10 a.m.-6 p.m. May 4 at the Statehouse Convention Center, Markham and Main streets, Little Rock. Noting the loss of approximately 44,000 Arkansas jobs due to the pandemic, most of them in the leisure and hospitality sector, the bureau says the job fair is expected to attract representatives "from sectors across the industry," according to a news release, including area restaurants, hotels, attractions and event venues, "seeking qualified employees for jobs in accounting, administration, management, sales, event set-up, front desk, security, housekeeping, serving, bartending, cooking, groundskeepers and more." Call (501) 376-4781 or visit LittleRock.com/jobs.

North Little Rock's Argenta Downtown Council is one of six winners of the Main Street Forward Awards from Main Street America, recognizing "communities that have shown exemplary recovery and resilience efforts amid the multiple crises of 2020," for the creation of the Argenta Outdoor Dining District. The designated outdoor seating area, now open the third weekend of every month during the spring, has helped local restaurants stay in business through the pandemic. Main Street America President and Chief Executive Officer Patrice Frey praises the council's "innovative and forward-thinking approach," adding, "Their creative solution not only helped restaurants survive in the short term, but also positively reinvented the area's image for the long term."

And the Arkansas Local Food Network and Bernice Garden are hosting "Playing with Produce: A Family-Friendly Fundraiser," a series of virtual events raising money for Washington Elementary after-school and summer cooking and nutrition classes, live via Zoom, 6-7 p.m. Thursdays in April. Each week's session, tied to a different restaurant or caterer, demonstrates recipes to broaden dinner menus and incorporate fresh, local ingredients. Each session will be available for on-demand viewing. Participants receive a box of ingredients and the Zoom link; to sign up, email [email protected] or [email protected] A grant from the 21st Century Community Learning Center supports out-of-school-time programs, but it's not enough to cover food-related costs for cooking and nutrition, organizers explain.

CORRECTION: Bruno’s Little Italy is hiring line cooks; the number to call to apply is (501) 554-2526. An earlier version of this story listed an incorrect number.