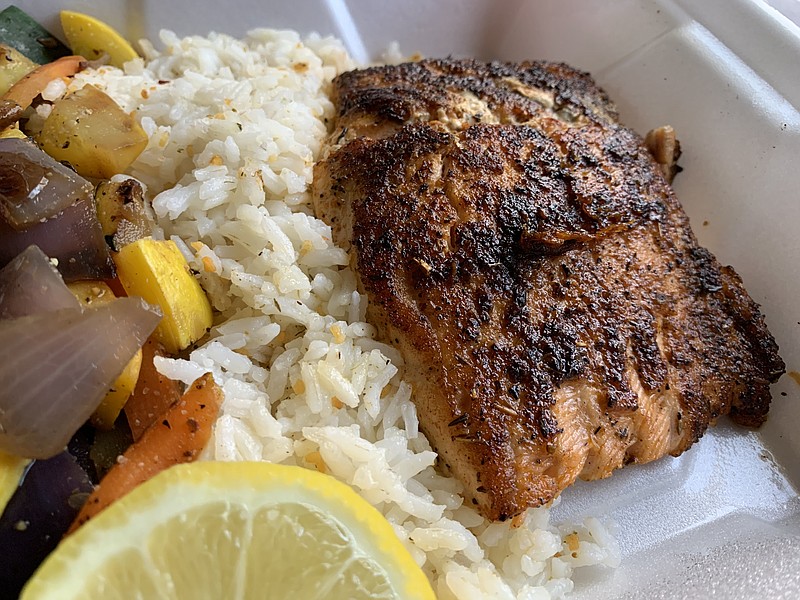 The blackened salmon (with rice and a veggie medley) is one of five non-fried entrees at Lazy Pete’s. (Arkansas Democrat-Gazette/Eric E. Harrison)

This week, we mostly got takeout meals from food trucks — consuming their tacos, wings and Thai food — with a stop in a brick-and-mortar shop just for variety's sake. (And also because we got a darn good meal there.)

Usual ground rules still apply: We're patronizing locally owned establishments and generally avoiding chains; we're sticking to a particular radius to at least have a good chance that our food will still be reasonably hot when it gets to our table; and we're paying for all meals up front.

We mostly think of Lazy Pete's as a provider of fried food, and it does a good job with that, but there are enough nonfried items on the menu to ease any guilt about ordering. There are five grilled entrees, four of which are available blackened, as well as fish/shrimp tacos (with a choice of the contents grilled, blackened or fried), raw oysters and boiled shrimp.

We opted for the blackened salmon, a major-league piece of fish cooked just right, lightly/mildly blackened enough to give it a little bit of extra zing but not enough to register as spicy. Enough of the "blackening" survived on the bottom of the foam clamshell, however, to also fully flavor most of the accompanying white rice. On the side, a generous portion of vegetables (mostly squash and zucchini medley with added onions and carrot slices) and some toasted-and-buttered fluffy French bread.

HOW IT WENT: The dining room is open so we decided to drop in and place our order in person. A couple in front of us dithered about what to order, so it took us a few minutes to get to the register, but the system to place (and pay for) our order was relatively seamless and it took practically no time to do. It took about 15 minutes for our order to come out of the kitchen.

HOW IT'S GOING: There were several folks in line behind us as we ordered; some were picking up call-in orders. Fried food seemed to come out faster. 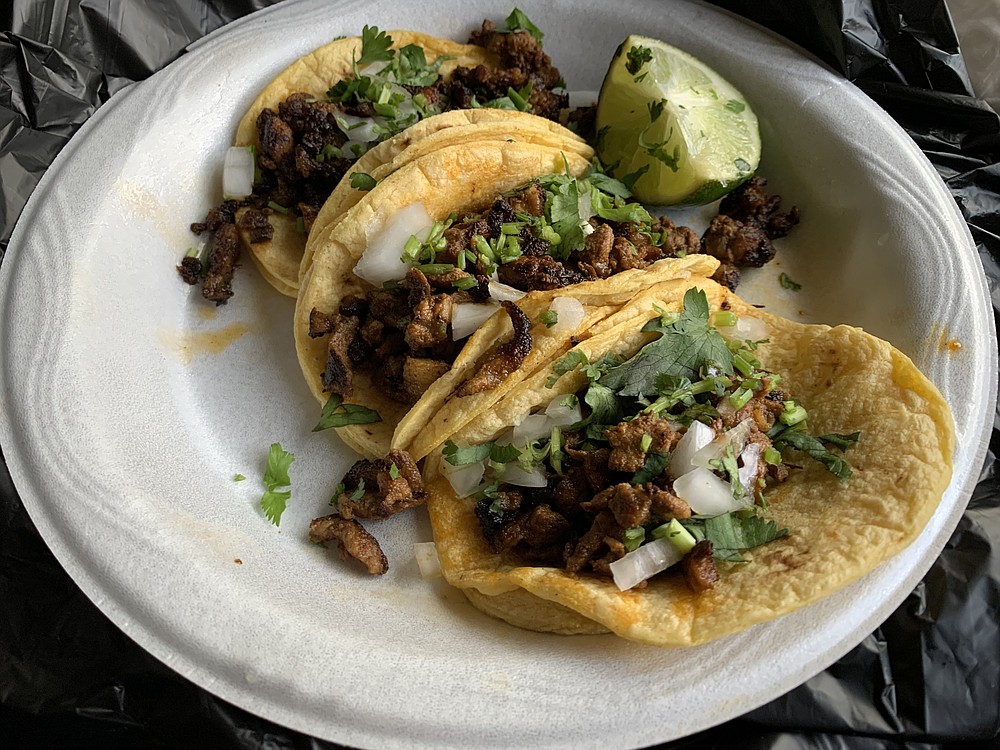 There are at least four Tacos Atilano food trucks in the metro area — in addition to the one in North Little Rock's Levy neighborhood, we also found locations at 8703 Geyer Springs Road, Little Rock; 6012 Crystal Hill Road, North Little Rock; and 1510 Old Morrilton Highway (U.S. 64), Conway; there are certainly enough that there is a central distribution hub from which things like tortillas are delivered (we saw the truck) and, when needed, mechanical assistance (we saw that truck, too).

These are straight street tacos on doubled corn tortillas, with cilantro and onions — we asked them to hold the onions but they didn't, but there weren't many, and they did perk up the flavor of the rather bland marinated pork. So did squeezing the juice of the provided lime wedge, and even more the mild green salsa we requested. Other taco options: carne asada (skirt steak), suadero (beef brisket), cabeza (beef head), lengua (beef tongue), tripa (tripe), chorizo (Mexican sausage) and pollo (chicken), all also choices for tortas, quesadillas grandes and burritos grandes. You can get just about anything in a combo with rice and beans and if you're feeding la familia, the 25-taco Taquiza with salsas, lime, grilled onions and peppers is $39.99.

HOW IT WENT: We were told our order would be ready in 10 minutes, and it was.

HOW IT'S GOING: The truck wasn't especially busy, considering it was Taco Tuesday. There were a few people ordering ahead of us, and several others behind. 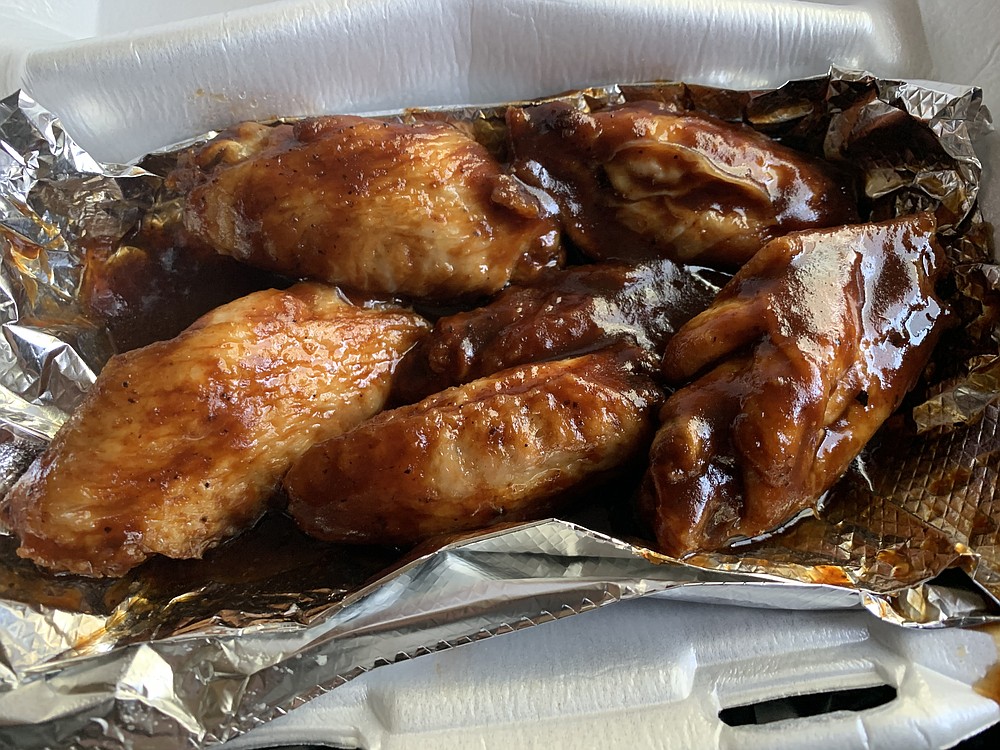 We had a half-hour wait for a half-dozen wings awash in a honey barbecue sauce from the WangzNThangz food truck. (Arkansas Democrat-Gazette/Eric E. Harrison)

Up front, let us declare that the wings were delicious, over-slathered with a tangy honey barbecue sauce, and they were piping hot when we got them home. That said ...

HOW IT WENT/HOW IT'S GOING: It shouldn't have required a half-hour wait for a half-dozen wings.

There were supposed to be five food trucks on the lot for that Thursday's Ortho Eat & Go, a biweekly food truck semifestival that serves principally the employees of OrthoArkansas but also customers who drive up to pick up a meal. Two didn't show, which meant that the three trucks that did were a bit overwhelmed until a "rescuer" (props to ShoBo's Kitchen) pulled in after about 90 minutes and a frantic phone call from the organizers.

There were perhaps a half-dozen orders ahead of ours, and we know each one was being prepared to order (ours certainly was). The order system for the two-person truck seemed a bit haphazard — a man doing the cooking and running the register through the food-truck window and a woman taking and handing out orders through the food-truck door. Perhaps if, when we placed our order, she had said, "It'll take 30 minutes" instead of "We'll have it out for you in a few minutes," we'd have been less cranky about the wait (we were adequately dressed for the stiff wind, but a lot of people were wearing short sleeves and even shorts). 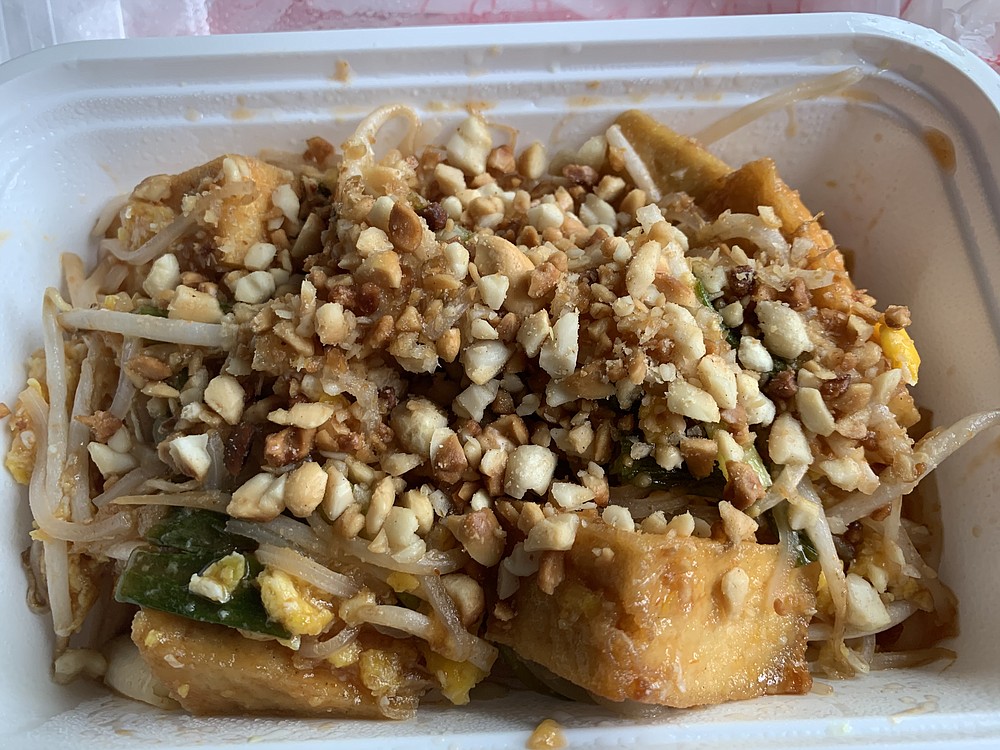 This is a brand-new outfit, just a couple of weeks old when we stopped by, with the husband-and-wife operators still feeling their way. The husband takes the orders, the wife does the bulk of the cooking.

Our Pad Thai featured firm, al dente thin rice noodles (the very noodles we prefer for Pad Thai) tossed with scallions and fried tofu (fresh tofu is also among the selection of protein options — chicken, pork, beef and veggie, but not yet shrimp) plus bean sprouts, green onions and egg in a sweet-and-sour sauce (that was a bit of a surprise) and topped with ground peanuts. We would have missed the normally accompanying lime wedge but for the "sour" in the sauce, which we deem is somewhat citric. Our spring rolls were delicious, crisp and with a pleasant vegetable-centered filling.

HOW IT WENT: It took about 10 minutes for our order to be ready, and we had to request our spring rolls in a cardboard to-go container since we weren't planning to eat them on the premises — not a problem, really.

HOW IT'S GOING: There were a couple of folks, members of a large party, ordering ahead of us, and a couple behind us, but compared to our previous visit to the Rail Yard (see last week's column), things weren't so busy.