Creed Williamson geared up for strong spring and summer 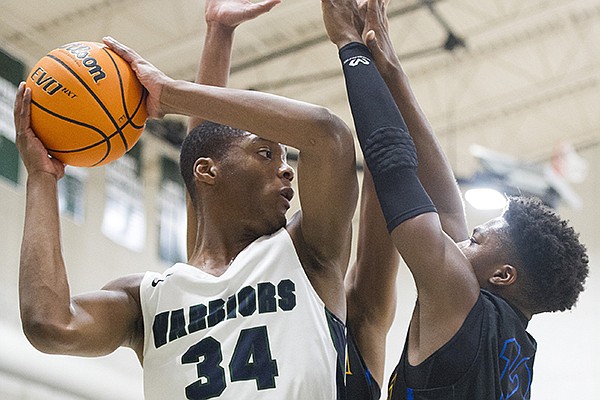 Little Rock Christian center Creed Williamson (34) looks to pass during a game against ESTEM on Saturday, Dec. 28, 2019, in Little Rock.

Arkansas Hawks forward Creed Williamson is looking to impress college coaches this spring and summer after dealing with the limited opportunities of 2020 because of covid-19.

“I hope to get more offers this summer because last summer impacted me because I wasn't able to show coaches what I was capable of,” Williamson said. “All they really had was, like, videos and what I did my sophomore year.”

Williamson, 6-8, 225 pounds, averaged 12 points and 7.4 rebounds while shooting 59% from the floor for Little Rock Christian as a junior. He has offers from Arkansas, St. John’s, Oral Roberts and Arkansas-Pine Bluff, and is drawing interest from Kansas, Michigan State and Missouri.

Recruiting leading up to the spring has been quiet, but it is sure to pick up over the next several months.

"Kansas has been keeping in touch with me, and some other schools have,” Williamson said.

His father and former Arkansas great and NBA sixth man of the year Corliss Williamson heads up the coaching staff for the 17-under Hawks. The younger Williamson said his father doesn't show favoritism.

“It’s cool. I really don’t know how to describe it. He’s my dad, but he doesn’t treat me like his son on the court,” Williamson said. “He treats everyone the same. He expects everyone to compete as hard as they can on the floor.”

Being recruited by former Arkansas coach Mike Anderson at St. John’s is special to Williamson since his father played for Anderson, who was an assistant on the 1994 national championship team.

“It’s pretty cool,” he said. “I’ve known them for quite some time, so he’s kind of like family.”

“Just watching his game, he’s shooting the ball a lot better now,” he said. “He has a better understanding of what he wants to do on the court. He knows his spots where he’s comfortable catching the basketball, so for him I think the next progression would be continuing to improve and being able to play on the perimeter.”