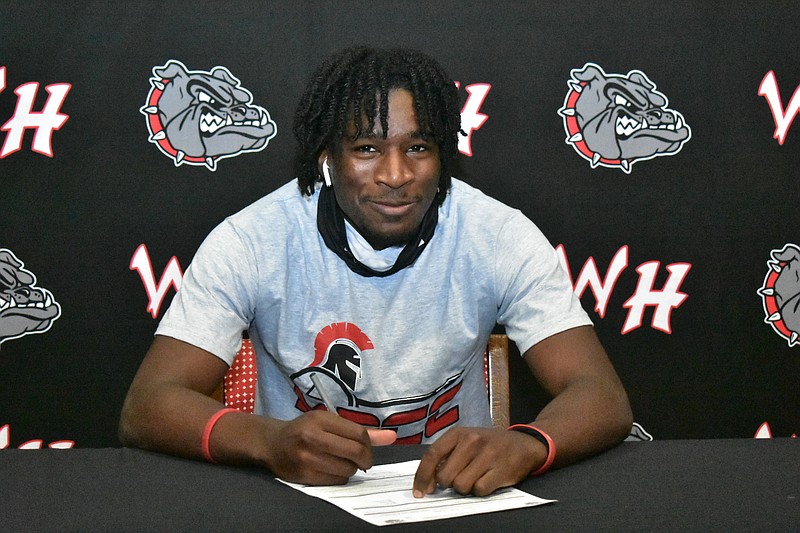 "I expect him to be a Division I cornerback when he leaves Mississippi Delta," Bolding said. "There are big-time JUCOs [junior college players] in Mississippi. I expect him to leave there and go to a big-time university on a full-ride. God don't just make corners that size. He don't put many of them out."

Eichelberger's college career will begin at Mississippi Delta Community College. The 6-foot, 185-pounder signed a letter of intent with the Moorhead, Miss., school, where he will play under former University of Arkansas at Pine Bluff Coach Cedric Thomas.

Thomas was hired at his junior college alma mater Dec. 30 after a short stay as defensive backs coach at the University of Southern Mississippi.

Eichelberger's own expectations are the same he said he's always set: "Come out and keep doing great."

He finished his senior season at White Hall with 31 tackles, 30 passes broken up, four interceptions and two receiving touchdowns. The Bulldogs finished 8-5 and reached the third round of the 5A state playoffs in 2020.

"Very physical" is how Bolding described the cornerback's style of play, adding Eichelberger was often used in press-man coverage.

But playing high school football wasn't always smooth sailing for Eichelberger. Bolding said he struggled at the start of his junior season.

"It's the sport that I want to play, and the only way for me to keep continuing to play is to work with what Coach gave me and get better with it," Eichelberger said. "[It took] a lot of work, a lot of work. I didn't have it my junior year."

This past season, Eichelberger has been a great leader for the Bulldogs, Bolding commented.

"He worked with our young guys, and we'll have some guys who will step up," Bolding said. "I don't know how you replace a guy like that, but he's going to do great things in football."