UNDER THE RADAR: Bryant’s Khasen Robinson 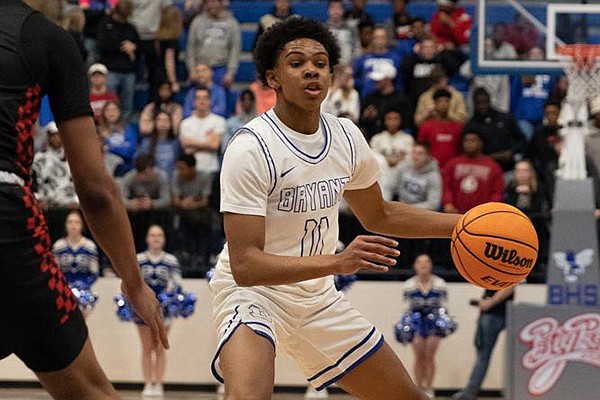 Khasen Robinson (11) of Bryant is shown during a game against Fort Smith Northside on Friday, Feb. 7, 2020, in Bryant.

On Wednesdays, we feature an in-state prospect who could be flying under the radar of college coaches. This week's UTR prospect is Bryant’s Khasen Robinson.

Stats: As a sophomore, he averaged 8 points, 3 rebounds and 2 assists per game.

“He’s a guy that can do it all. He can score in every way. He drives it well, he shoots it well, he has a nice little pull-up game, shoots from the free throw line well. Khasen goes so hard at the rim and takes shots with contact and gets fouled. He’s just so hard to guard because he can score in so many ways. Defensively, he’s really good, too. He’s good on the ball and off the ball.”

“We really missed him this year. He ruptured his Achilles in the first half of the first game. It was obviously a huge blow to him and to our team as well. In the five games we lost, we felt like if we had him we had a good chance to win all five of those. Not saying we would’ve, but (we had) a chance because he’s such a dynamic player.”

Injury and covid-19 impacted his recruiting:

“We just came out of covid and there was no AAU during the spring and summer, and then we really believed he was going to have a great year. Looking back on it, I still believe that.

“Hopefully he can play a little AAU with the (Arkansas) Hawks toward the end of the summer. If not, he should be good to go for basketball season this winter.”