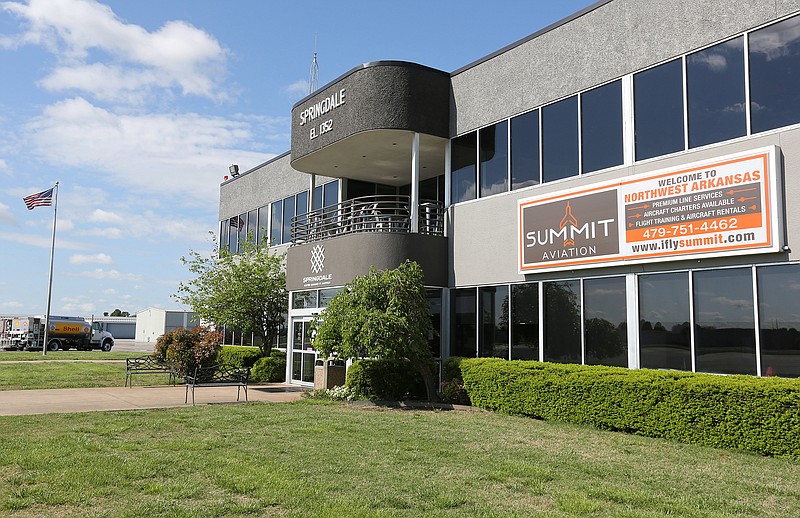 The east facing side of the Springdale Municipal Airport Wednesday, April 29, 2020, in Springdale.

SPRINGDALE -- The Federal Aviation Administration has awarded the city $57,162 in covid-19 relief money for use at the Springdale Municipal Airport. The City Council on Tuesday night voted 8-0 to accept the grant.

The grant money is tied to the city's air control tower contract with Robinson Aviation of Oklahoma City, said Wyman Morgan, the city's director of administration and finance.

With the grant money replacing the city's control tower funding, the original amount budgeted for the tower will become surplus money in the city's budget, Fulfer continued.

Morgan listed several projects the surplus money could pay for, projects the Airport Commission has considered in recent years.

The commission looked at a new air conditioning and heating system in the terminal that would include ultraviolet components to kill bacteria and viruses, he said. This would cost about $23,000.

The members also have talked about improving the facade of the airport. They might choose to spend $70,000 painting one remaining hangar to match others painted last year, he added.

Or the commission might choose to build another hangar, Morgan continued. Airport officials keep a list of about 25 to 50 pilots waiting to rent hangar space.

Most of the airport's operating budget of $376,860 comes from hangar rental fees, Morgan said.

The airport operates mostly self-sufficiently, Morgan said. "The only time the city gives us more money is for a capital improvement project like an expansion," he said.

The FAA gives the airport $150,000 to operate each year, Morgan continued. The agency also grants discretionary money for projects based on merit. Those projects must be included in an airport's five-year, long-range plan as required by the federal agency.

The current project in Springdale will extend the east taxiway to the north along the entire length of the runway, so pilots don't have to cross the runway to get to and from their hangars on the east side of the airport.

"The FAA says it's a safety issue any time a plane has to cross the runway," Morgan said.

The city has spent $167,000 to design the project, Morgan said. Adding construction costs to that will mean $3 million for the entire project, with construction beginning within a year, he said.

Brad Baldwin, the city's director of Engineering and Public Works, said the city this month will solicit bids for the project from construction contractors. Construction money will come from the city's undesignated capital improvement money, although he won't know a cost until the bids are returned, he said.

The city in 2018 bought for the airport three older houses on East Emma Avenue, and the houses were razed. The city paid a $304,000 for about 2 acres.

But city officials eyed the land for downtown drainage, and the Airport Commission agreed in November 2019.

Most of the area along Spring Creek as it passes through downtown lies in a 100-year flood plain as the Federal Emergency Management Agency determines it, Baldwin said.

That flood plain was postponing development at a time the city was starting to revitalize the downtown area.

Members of the commission had considered building an executive terminal on Emma or at least providing a nice driveway off Emma to the terminal, Morgan said.

"The airport is just a short way to [U.S.] 412," Morgan said. The commissioners also could choose to clean up the airport approach on South Powell Street from East Robinson Avenue, he said.