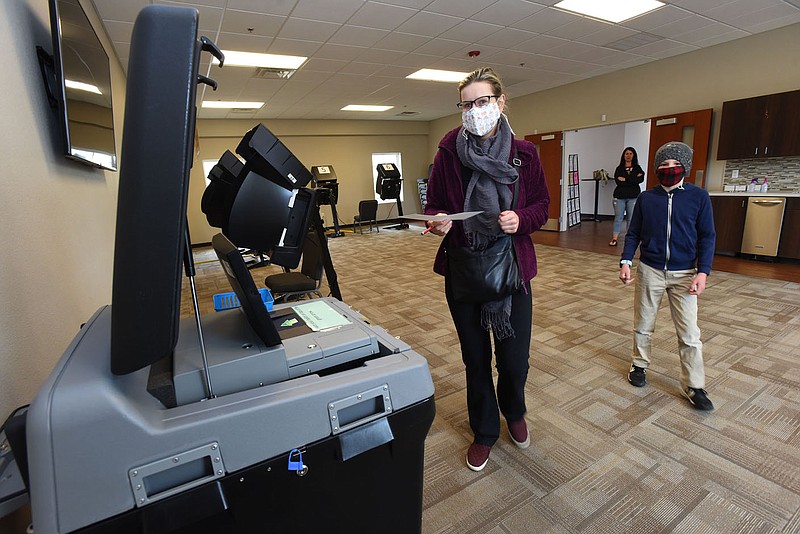 Alexandra Odesskiy (cq), casts her ballot on Tuesday April 13 2021 during the Bentonville bond issue election. She brought her son, Daniel (right), 9, with her to watch the voting process at First Landmark Missionary Baptist church in Bentonville. Go to nwaonline.com/210414Daily/ to see more photos. (NWA Democrat-Gazette/Flip Putthoff)

BENTONVILLE -- The city will have $266 million to spend on streets, parks and other projects after residents overwhelmingly approved a bond issue Tuesday.

Voters gave a resounding OK to all nine questions on the special-election ballot.

The city asked voters to approve bonds for capital projects and for money to refund existing bonds to be financed by extending a 1% city sales tax.

"We know the city of Bentonville is one of the fastest growing in the nation," Mayor Stephanie Orman said. "We appreciate that our citizens are making the investment for the continuation of the 1-cent sales tax for needed infrastructure,

"I am thankful for people putting their trust in us to move needed projects forward for the city of Bentonville. We all know that Bentonville is a great place to live, work and play and we look forward to continuing our work to keep our city moving forward. I am proud to serve as mayor of Bentonville and proud of our citizens for stepping up and voting for these much-needed improvements."

Questions 1 and 2 on the ballot had to pass for any of the other projects, even if approved, to be paid for with bonds.

Final, but unofficial vote totals are:

"The citizens of Bentonville have again shown their support for improving and expanding our street infrastructure as well as citywide drainage, emergency services, parks and library," Councilman Chris Sooter said. "Today's vote, along with significant private development projects, will move our city forward to its brightest future yet."

Eighty percent of the revenue raised by the city's 1% sales tax for capital expenses goes to pay for bonds and 20% goes to ongoing needs. The city would maintain the same ratio if the sales tax is extended, said Jake Harper, city director of finance and administration.

"Today is a great day for Bentonville," Councilman Tim Robinson said. "We will look back on this decision a decade from now and say, 'I can't imagine Bentonville without this park or that street.' We say that today about the projects the last bond helped us complete."

The city could see a bond interest rate of between 3% and 5%, said Kevin Faught, the city's bond adviser. The schedule is to offer the bonds for sale June 21, Faught said.

Voters in the other large cities in Northwest Arkansas passed ballot measures in 2018 and 2019 extending sales taxes to repay outstanding bonds and issue new ones for a variety of projects.

The election results still must be certified by the Benton County Election Commission. 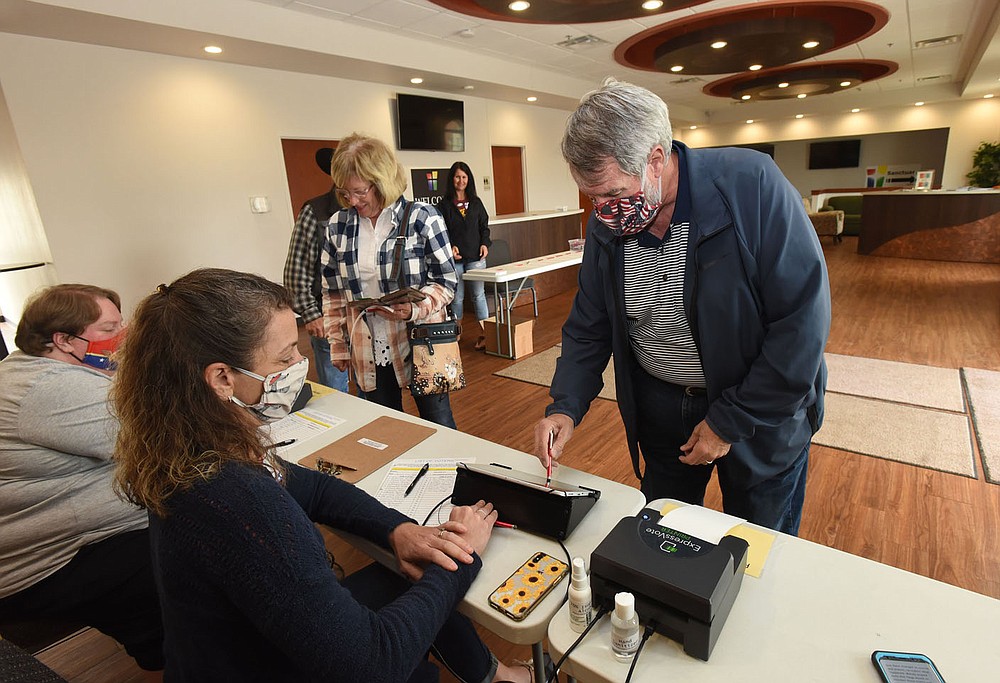 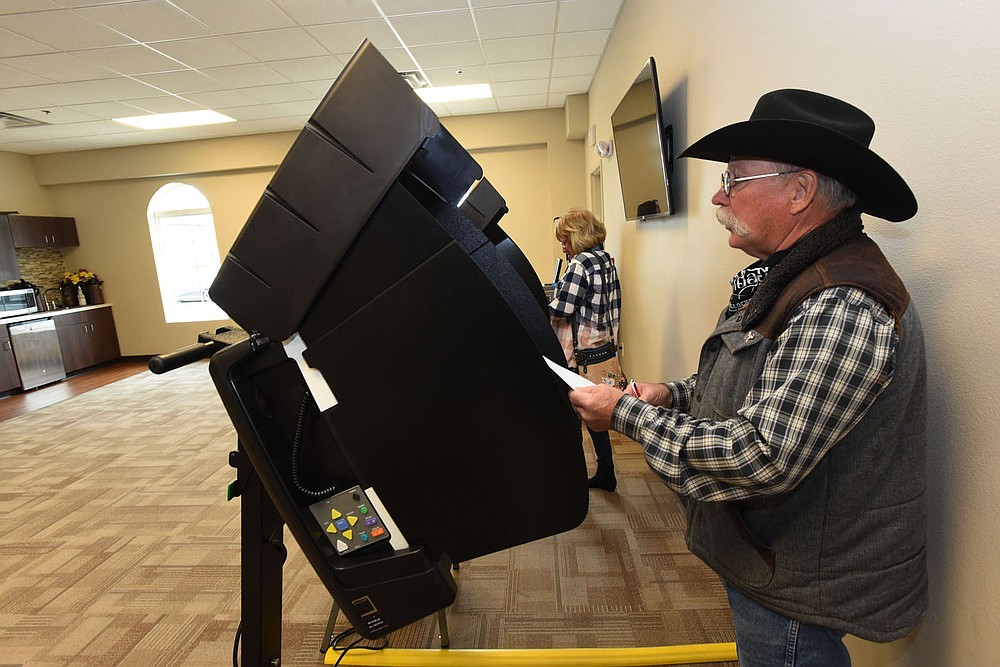 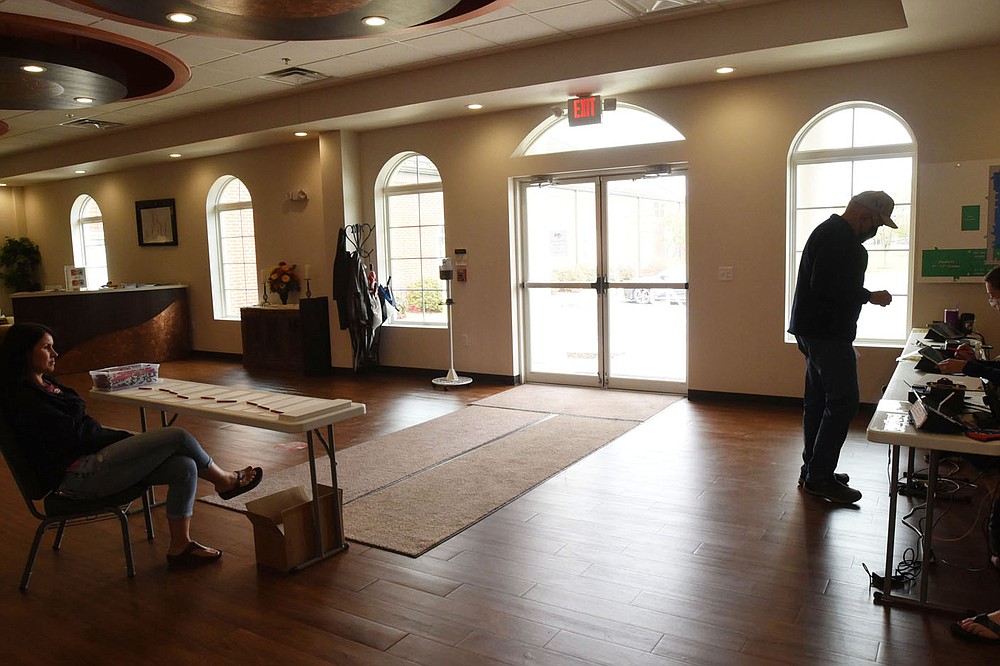 A voter signs in to cast a ballot on Tuesday at First Landmark Missionary Baptist Church during the Bentonville bond election. Go to nwaonline.com/210414Daily/ to see more photos. (NWA Democrat-Gazette/Flip Putthoff)
ADVERTISEMENT