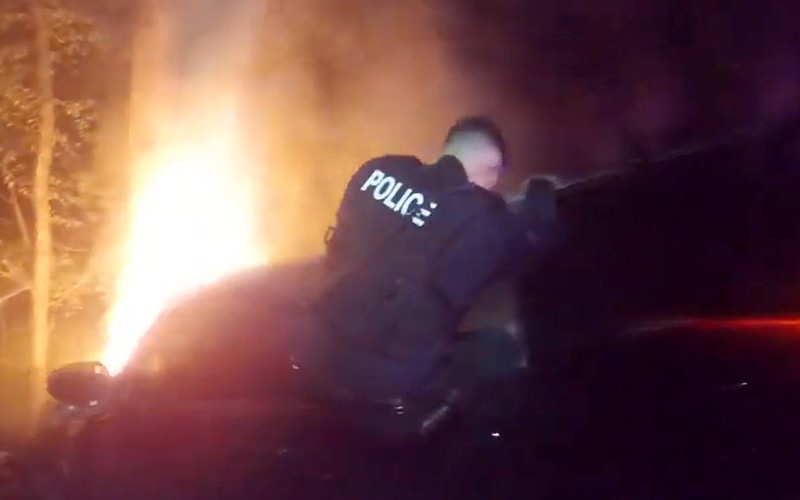 TONTITOWN -- A woman who fled from police and crashed a stolen SUV into a tree late Saturday was in critical condition at Mercy Hospital in Springfield, Mo.

Jenison said a Tontitown officer, Garrett Henry, saw the Toyota drive past him at 10:37 p.m. Saturday. The officer followed the SUV and a license check indicated the vehicle was stolen several days prior in Fayetteville and had a weapon in the vehicle when it was stolen.

Jenison said Costales crashed the Toyota into a tree near 1837 Brush Creek Road. The initial investigation indicated the Toyota was traveling in excess of 55 mph when it hit the tree and caught fire.

"There's a 90-degree left turn there," Jenison said. "She tried to straighten out the turn and didn't make it."

Jenison said Henry told the driver to get out of the car, but when she did not respond Henry waited for assistance because of the report a gun was in the vehicle. Officer Rebecca Martis arrived and the two heard screaming and found Costales was pinned in the driver's seat of the burning vehicle.

Henry broke out the passenger side window but couldn't get Costales out, Jenison said. He got in the car on the driver's side, moved the seat and pulled her out. Martis used a fire extinguisher to put out the flames on Costales' body.

Jenison said Henry was not burned but got cut climbing through the broken windows and dislocated a shoulder while pulling Costales out.

Jenison said residents who heard the crash brought baseball bats to break the windows and fire extinquishers to help put out the fire.