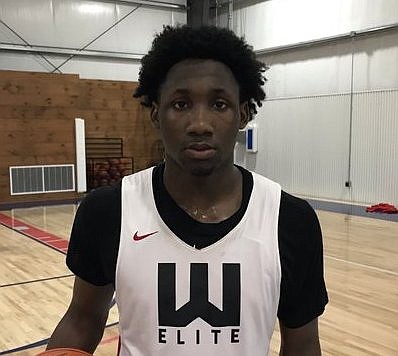 Marion sophomore point guard Jayden Forrest has an offer from Oral Roberts, but is likely to pick up several more this spring and summer while playing for the 16-under Woodz Elite.

He has the speed and quickness to excel in an uptempo offense, and shows the ability to handle the ball with ease and set up his teammates while also being a scoring threat.

“Jayden gets his teammates going but can also score the basketball at a high level,” Brewer said. “He was all-conference, all-state at Marion.”

Forrest, who is also drawing interest from Liberty, Robert Morris and Arkansas-Pine Bluff, is excited about the offer from Oral Roberts.

“I know they had a great run in March Madness,” he said. “I'm really blessed to get that offer and I continue to work.”

Forrest and the Woodz Elite begin the spring season at the Texas Tipoff in Duncanville, Texas, this weekend. He played football as a ninth grader and plans to play quarterback and receiver for Marion in the fall.

His strength and body type give him an advantage over most other guards his age.

“It really helps me in basketball being physical on the football field,” he said. “It translates in coming in here and being aggressive, and most importantly being a dog on the court defending and getting a bucket.”

Forrest’s uncle, Michael, played running back for Arkansas from 1975-78. Jayden Forrest is looking to be a leader for the Woodz Elite.

“Most importantly be a leader first, then second get my team involved, be aggressive and go out here and just get buckets,” he said.