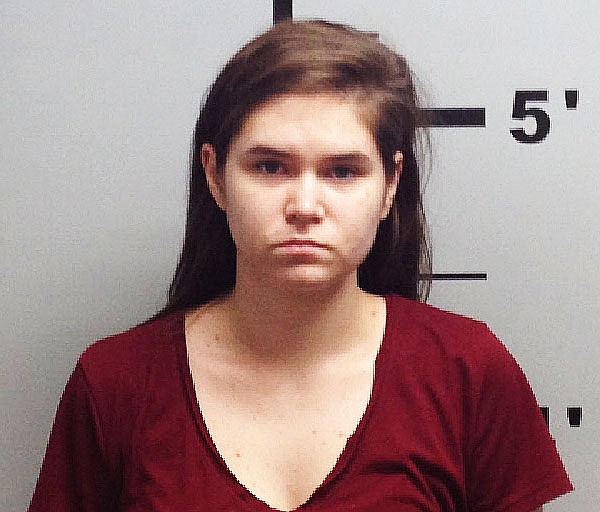 BENTONVILLE -- Andrea Lea Wilson murdered her grandmother with a hammer because she believed God told her to make a sacrifice or she would be sent to hell, a deputy prosecutor said Monday.

Wilson believed May 15, 2018, was the last chance for her to make the sacrifice, said Joshua Robinson, deputy prosecutor.

Wilson, 28, pleaded guilty Monday to first-degree murder, aggravated assault and battery. She was originally charged with capital murder, but she agreed to plead guilty to the lesser charge and received a sentence Monday of 36 years in prison.

She first tried to kill a bicyclist by hitting him with her car, Robinson said.

Jonathan Hampton said Wilson appeared angry inside the vehicle and was yelling as he biked down the sidewalk along Southwest Regional Airport Boulevard in Bentonville at 1:42 a.m. May 15, 2018. He was knocked off his bicycle, according to court documents.

Wilson went to her grandmother's home in Pea Ridge later that day, and the two ate dinner together, Robinson said.

Ruby Ross, her grandmother, went to sleep, and Wilson struck the 81-year-old woman in the head with a hammer approximately four times, he said.

Wilson concealed the hammer and other items in a garbage bag and placed those items in an outbuilding on the property, according to Robinson.

The plea hearing was conducted via Zoom with Wilson at the Benton County Jail. The judge was the only one in the courtroom with the other parties participating by video conferencing.

Wilson told Benton County Circuit Judge Robin Green she understood her rights and had not been coerced into pleading guilty.

Wilson underwent evaluations conducted by experts for prosecutors and the defense, and the experts disagree as to whether Wilson was able to appreciate the criminality of her conduct and conform her behavior to the law. She said she was not taking her prescribed lithium at the time of the crimes, Wilson said.

Robinson said law enforcement and Hampton were in favor of the agreement. Family members of Ross and Wilson also agreed to it, but some family members wanted a more lenient resolution, Robinson said.

Ross told the judge her parents were hard workers and provided a loving home, which her niece and nephew didn't have. She said the two suffered from neglect and abuse as children, and their childhoods were marred by their parents' drug use.

Ross said her father died in 2007 and his death was especially hard on Andrea Wilson because she was always a paw-paw's girl.

"It has been almost three years, and, while we know that Andrea has to suffer the consequences of her actions, we please ask for mercy," Ross said.

Ross said if her mother was here she would not want her granddaughter to be punished her entire life.

"Actually, if she could manifest herself in court today she would tell you to let her go because of her complete and utter love of Andrea," Ross said. "I want Andrea to know that I forgive her. She is valuable and we still love her."

Gregory Wilson described his grandmother as the kindest person he has known.

"Her tremendous sense of empathy in an unforgiving world, particularly for those who were considered to have done horrible things, was always inspiring to me," he said. "We didn't see that often at home, so that was perhaps one of her best lessons I gained from her lifetime of love."

Andrea Wilson could be seen on the screen in the courtroom wiping away tears as her aunt and brother read their statements.

Robinson told the judge the family's wishes and the issues with the mental evaluations are reasons for resolving the case with the plea agreement.

Andrea Wilson gave her own statement in court. She first apologized to Hampton.

"I hope you find it in your heart to forgive me," she said.

She then apologized to her family. She said there are not enough words to express her remorse. She took full responsibility for her actions. She said she's not the same person who was arrested in 2018.

Green sentenced her to 36 years in the Arkansas Department of Correction. Wilson must abide by a suspended sentence for 10 years after her release from prison. She will be eligible for parole after serving 19 years in prison.

"This case started out as a death penalty case, but it was always more complicated than it initially appeared," said Shane Wilkinson, her attorney.

"Andrea has a history of mental illness combined with a terrible upbringing that has never truly been acknowledged. She is now on her medications and will remain that way when released."