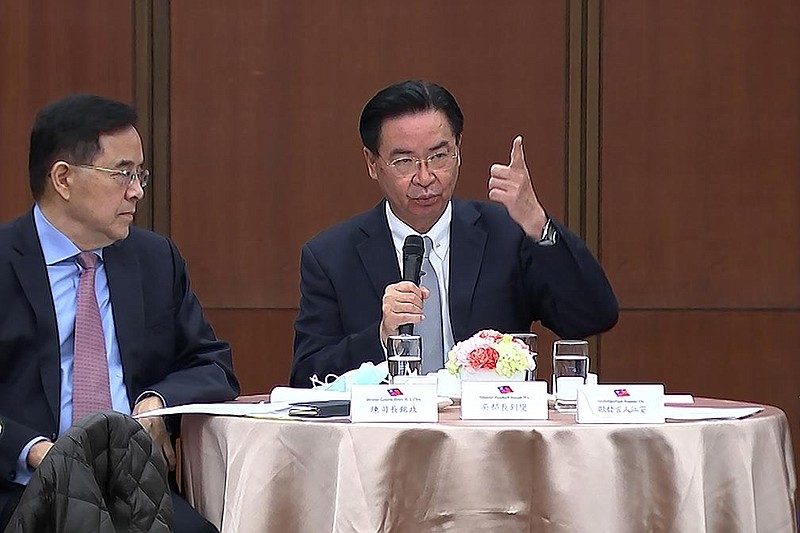 TAIPEI, Taiwan -- Taiwan's foreign minister Wednesday said the island will defend itself "to the very last day" if attacked by China.

Joseph Wu said China's attempts at conciliation while engaging in military intimidation are sending "mixed signals" to the island's residents.

China claims Taiwan as its territory to be won over peacefully or by force.

China does not recognize Taiwan's democratically elected government, and leader Xi Jinping has said "unification" between the sides cannot be put off indefinitely.

"On the one hand they want to charm the Taiwanese people by sending their condolences, but at the same time they are also sending their military aircraft and military vessels closer to Taiwan aimed at intimidating Taiwan's people," Wu said at a ministry briefing.

The vast improvements in China's military capabilities and its increasing activity around Taiwan have raised concerns in the U.S., which is legally bound to ensure that Taiwan is capable of defending itself and to regard all threats to the island's security as matters of "grave concern."

China's military said Monday that the new naval drills were meant to help it "safeguard national sovereignty, security and development interests," terms often interpreted as being directed at Taiwan's leadership that has refused to give in to Beijing's demands that it recognize the island as part of Chinese territory.

Taiwan and China split amid civil war in 1949, and most Taiwanese favor maintaining the current state of de facto independence while engaging in robust economic exchanges with the mainland.

Meanwhile, the American military is warning that China is probably accelerating its timetable for capturing control of Taiwan.

A military move against Taiwan would be a test of U.S. support for the island. For the Biden administration, it could present the choice of abandoning a friendly, democratic entity or risking what could become an all-out war over a cause that is not on the radar of most Americans. The United States has long pledged to help Taiwan defend itself, but it has deliberately left unclear how far it would go in response to a Chinese attack.

This accumulation of concerns meshes with the administration's view that China is a front-line challenge for the United States and that more must be done soon -- militarily, diplomatically and by other means -- to deter Beijing as it seeks to supplant the United States as the predominant power in Asia.

"We have indications that the risks are actually going up," Adm. Philip Davidson, the most senior U.S. military commander in the Asia-Pacific region, told a Senate panel last month, referring to a Chinese military move on Taiwan.

"The threat is manifest during this decade -- in fact, in the next six years," Davidson said.

Biden administration officials have spoken less pointedly but stress the intention to deepen ties with Taiwan, eliciting warnings from Beijing against outsider interference in what it considers a domestic matter.

Information for this article was contributed by Robert Burns, Ken Moritsugu, Huizhong Wu and Matthew Lee of The Associated Press.