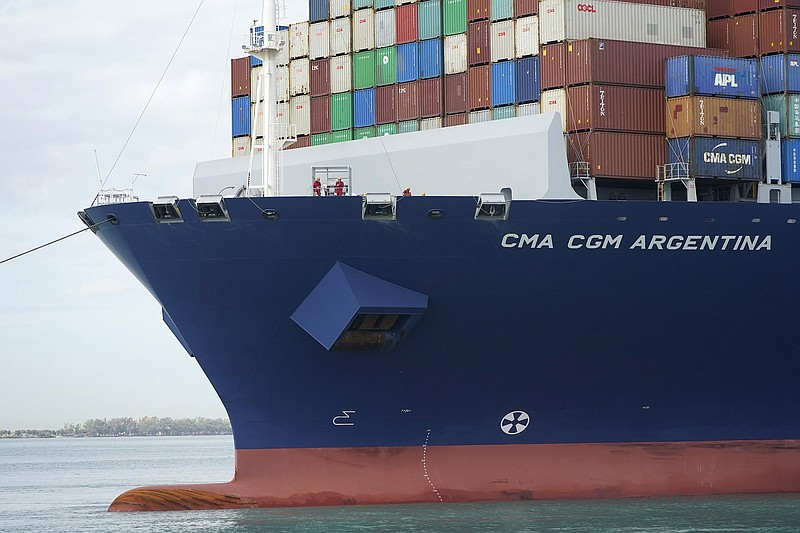 The CMA CGM Argentina arrives Tuesday at PortMiami, the largest container ship to call at a Florida port. The U.S. trade deficit grew to $71.1 billion in February, as a decline in exports more than offset a slight dip in imports. (AP/Lynne Sladky)

The U.S. trade deficit widened in February to a record high as household and business demand kept imports running ahead of shipments to overseas customers.

The U.S. deficit grew to a record $71.1 billion. Severe weather took some of the blame from analysts, who were expecting a slightly smaller deficit.

The February gap between what America bought from abroad compared with what it sold abroad jumped 4.8% above the revised January deficit of $67.8 billion, the Commerce Department said Wednesday.

The coronavirus pandemic has stifled global trade for more than a year, but those barriers appear to be falling as millions of people get vaccinated and countries start easing operating restrictions for businesses. Total trade after two months of 2021 was just 1.8% behind where it was at the same point last year, before the global economy was blindsided by the pandemic.

The U.S. vaccine rollout, which so far has gotten at least one shot into the arms of more than 100 million Americans, is far ahead of major global economies in Europe and Asia. Should that trend continue, economists believe it will accelerate a return to "business as usual" and an even wider trade gap as the U.S. economy moves into high gear.

"The trade deficit is poised to widen as the U.S. recovery surges in the spring and summer," said Oren Klachkin of Oxford Economics in a note to clients. "Better health conditions, reopenings, and fiscal stimulus will boost domestic demand and keep a strong pull on imports."

The higher trade deficit in February reflected a 2.6% decline in exports of goods and services, to $187.3 billion on a seasonally adjusted basis. That more than offset a 0.7% decline in imports, which ticked down from January's record high of $260.1 billion.

The February goods deficit of $88 billion, up from $85.2 billion in January, was also the highest on record. A $5 billion decrease in exports of goods was stoked by a $2.5 billion drop in the category of capital goods, which are things businesses use to produce goods and services, as opposed to consumer goods, which are end-use items.

The February services surplus of $16.9 billion was the lowest since January 2012, tripped up by a decline in exports of travel services. The U.S. generally runs a big deficit in goods and a surplus in services such as travel and transport.

President Joe Biden and his team have been relatively quiet regarding his predecessor's hard-line trade policies. Biden seems to be more focused on domestic policies so far and hasn't called off former President Donald Trump's trade war with China or suggested he would scale back tariffs on imported steel and aluminum.

The U.S. trade deficit has been widening fairly consistently on a monthly basis since reaching a more than three-year low in February 2020. Merchandise imports have been pouring into the nation's ports, leading to shipping container shortages that have driven up freight rates and left domestic producers scrambling at a time when inventories are lean.

Global supply chains were put to the test in late March after a container ship blocked the Suez Canal for days, forcing carriers and other vessels to weigh costly and time-consuming voyages around Africa.

Meanwhile, a global shortage of semiconductors has been causing automakers such as Ford Motor Co. and Nissan Motor Co. to scale back production, further affecting global trade.

The value of imported semiconductors was little changed at $5 billion in February, while exports of the chips dropped more than $400 million, to $4.8 billion.

Information for this article was contributed by Matt Ott of The Associated Press and by Olivia Rockeman of Bloomberg News (WPNS).