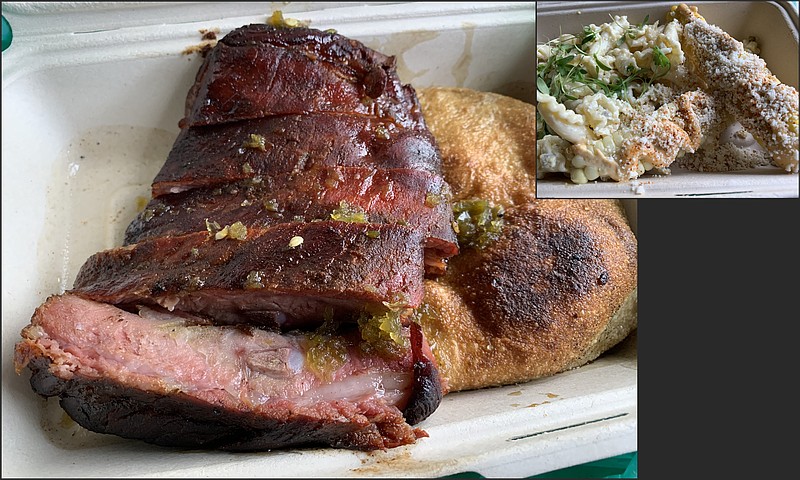 The 1/3 slab of St. Louis-style ribs (above) and the Navajo fry bread come in one container as part of Low Ivy's Pepper Jelly Rib Platter. In the other container (top right): jalapeno pasta salad and elote corn "ribs." (Arkansas Democrat-Gazette/Eric E. Harrison)

We keep on truckin' for this week's takeout orders, two of which came from area food-truck havens. (Stand back and watch our segues.)

As per our practice, we're sticking, where possible, to locally owned establishments, within a hot-food-to-home safety zone, and paying in full for all our meals.

Chef/owner Amanda Ivy sure gets around. Even before she had a food truck, formerly The Beast, that she bought a couple of years ago, she ran up an impressive list of credits, including (but not limited to) executive chef at Sauce(d), Southern Gourmasian, 1836 Club (she later also worked with Donnie Ferneau — and also gained food-truck experience — as his sous chef on TV's "Great Food Truck Race"), Heights Taco & Tamale, Old Mill Bread Co. And, of course, she operates Low Ivy Catering.

All of which go to establish her Southern food bona fides, if you would need any after chowing down on her 1/3 rack St. Louis-style ribs, lightly slathered with smoked jalapeño jelly and served with elote corn ribs (that's a corn cob sliced into long pyramidal "ribs" and done up as Mexican street corn), chipotle potato salad, pickled jalapeño pasta salad and Navajo fry bread.

The ribs were meaty and firm; what we tasted, principally, was the smoke more than the jalapeño jelly, some of which had transferred to the big hunk of fry bread in the same foam clamshell, but which made the fry bread a good deal more interesting. Coming as we did late in the food truck's stay at the venue, they had run out of the potato salad but offered to double up on the pasta salad, made with bellflower shaped campanelle (a pretty rare pasta type, at least around here) that had a considerably higher jalapeño kick than the ribs. The two "ribs" of street corn were just plain fun.

HOW IT WENT/HOW IT'S GOING: We mentioned we had arrived only 20 minutes before the truck shut down for the day, so we had no competition to order and it took about 10 minutes for our food to emerge. 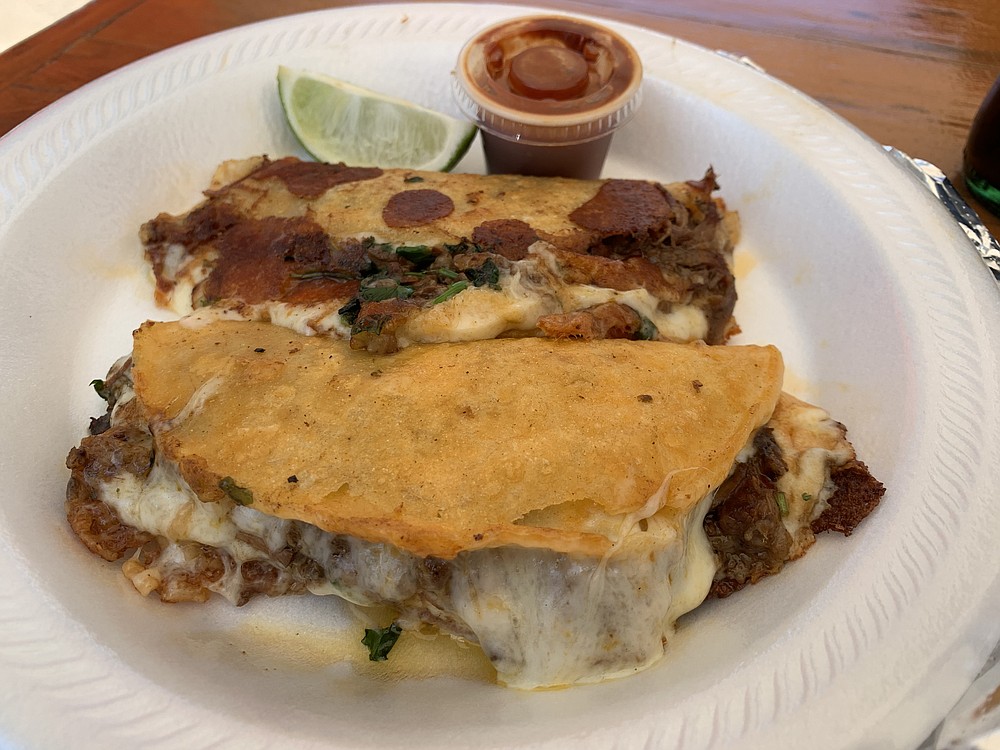 And speaking of food trucks, we decided to pay a visit to the one owned by chef Geovanny Villagran to find out why he's one of six finalists in this year's Diamond Chef competition (virtual finale is April 22).

La Casa de mi Abuelita translates as "my grandmother's house" (hence the "Mawmaw's House" part of the name), a reflection of the authenticity of Villagran's recipes and the results. We can't translate "pinches" into English in this family newspaper, but he has applied it to everything on his menu — pinches tacos, pinches burritos, pinches quesadillas, pinches appetizers, pinches drinks. (Pinches Tacos is also the name of a food truck operated at one time, at least, by Guadalupe "Lupita" Alonzo, who is the namesake for Lupita's on Cantrell Road and who has another food truck, Luncheria Mexicana Alicia, on which we have previously reported.)

Anyway, we can vouch for the authenticity of the quesabirria tacos we tried — in this case, it's shredded beef (and not goat) with melted cheese in corn taco shells that have been press-fried on a grill or in a pan, and presented, oily but delicious, with a small cup of salsa, a lime wedge and a cup of hot broth that we are guessing, since we got no instructions, is for dipping the tacos.

HOW IT WENT: Were our tacos worth the 25-minute wait in a slow-moving line and another 20-minute wait for an extremely overworked Villagran to turn out our order? Well, yes, we guess. It was a lovely spring day, so we didn't mind the wait per se, and it being a lovely spring day we decided that, rather than try to hasten these home, to occupy the end of a bench of somebody else's table and consume them on the spot. Which meant they were nearly finger-mouth-burning-hot and sloppy as all get-out, but thoroughly enjoyable.

HOW IT'S GOING: We mentioned the long line. There were nearly a dozen folks ahead of us, and more than a dozen behind us after we ordered. The Rail Yard was crowded, not only with spring feeders (most of whom, while they were not eating, remained masked) but with kids and dogs and live musicians and wonderful smells. 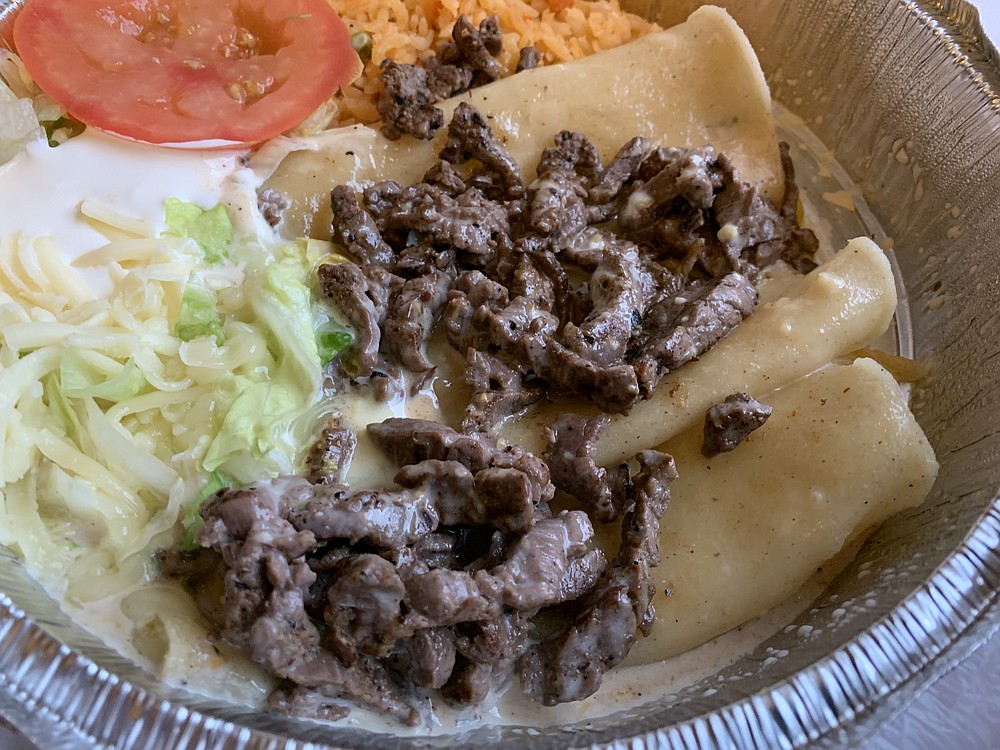 And speaking of Mexican food, we made a journey to what we figured would be a northern edge of our comfort zone and made a first visit — for us — to this establishment in North Little Rock's Lakewood Village. Our three cheese enchiladas came covered in a congealing cheese sauce, topped with grilled steak (grilled chicken is also an option), with Mexican rice (that included peas and carrots) and a sour-cream topped shredded cheese and lettuce salad.

The enchiladas were delicious, the steak topping them tender and tasty (and it would have been so easy for the kitchen to overcook it to inedible toughness — we know, because we've experienced it altogether too often, so our compliments to the chef). The rice? Not so much, but then we rarely expect much from Mexican rice, so if it isn't just plain bland, it's a plus. The shredded cheese in the salad was a pleasant surprise. The guacamole was definitely a disappointment — the "medium" order came in a very small foam cup, and what we tasted primarily wasn't garlic, or onion, or even avocado, but salt.

HOW IT WENT: The dining room is open but nobody was eating therein when we visited in the late afternoon, ahead of any real dinner traffic. We ordered at the front desk and it came out 11 minutes later. But a traffic snag on I-40 at the I-30 interchange forced us to take a longer route home and consequently our enchiladas, while still slightly warm, were certainly not hot.

HOW IT'S GOING: Customers placed two to-go orders in front of us and one behind us, all for Taco Tuesday street-taco specials. 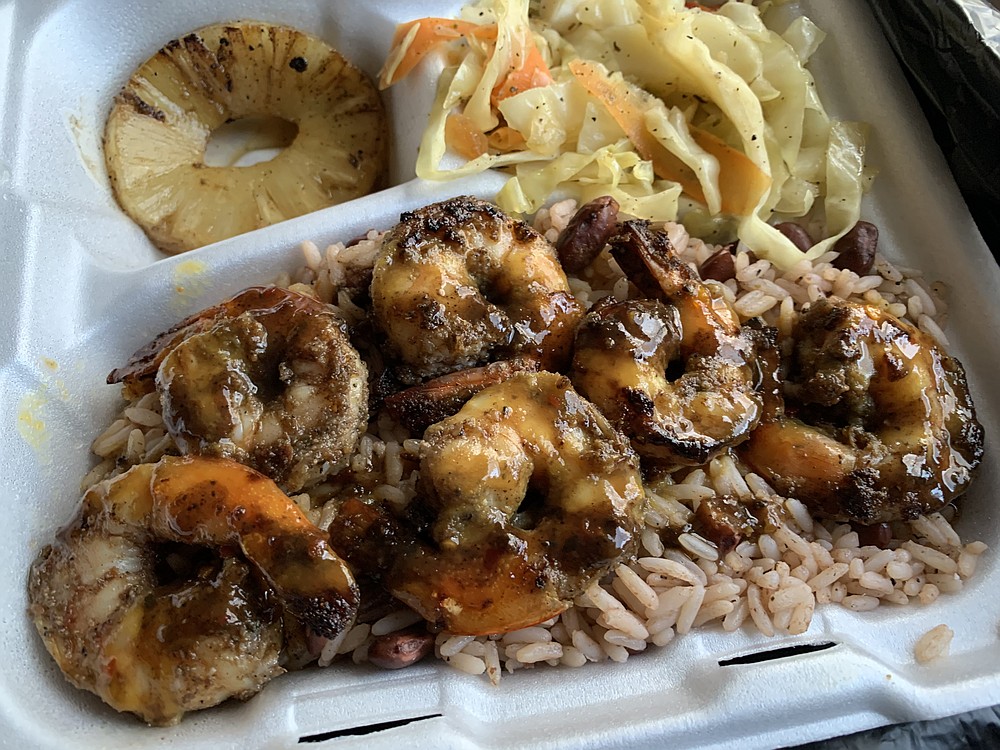 Yeh Mon's jerk seasoning has a nice kick but doesn't raise an alarm. We got a true "traditional Jamaican meal," a half-dozen shrimp served over brown rice and "peas" (more like red or kidney beans) with sides: a lightly grilled pineapple ring replaces the plantain slices we had when we dined there pre-pandemic — they're seasonal and evidently out of season; and a tangy carrot-and-cabbage mélange. There was so much food we had to hold off for a while on the beef patty, a lively meat paste in a flaky, square yellow pastry shell, but it was delicious even after it had cooled.

HOW IT WENT: Yeh Mon is currently doing takeout only. We stopped by too late for lunch but too early for dinner. It took just about the promised five minutes for the woman who took our order to cook our food.

HOW IT'S GOING: A couple entered just as we were leaving, so it appears we just beat the rush.