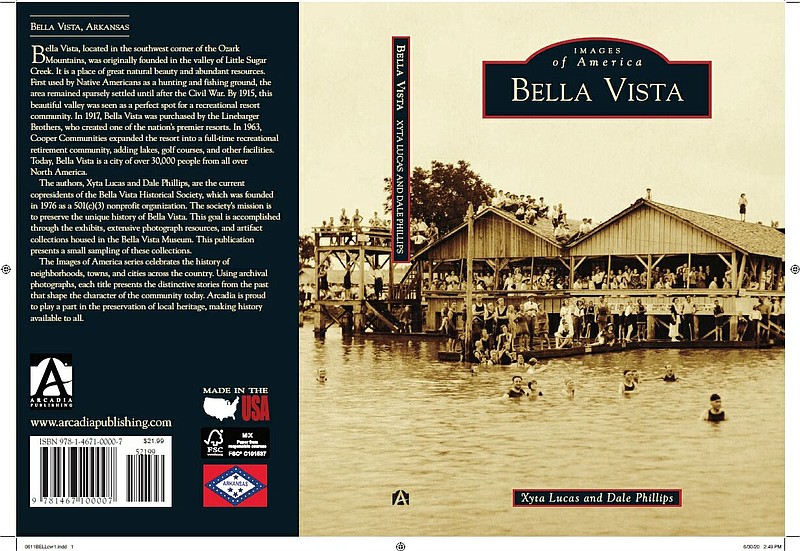 “Bella Vista” was published by Images of America and will be formally released at a book signing starting at 2 p.m. April 17 at the Bella Vista Historical Museum. The afternoon will also include activities outdoors, weather permitting. (Courtesy image)

When Xyta Lucas and Dale Phillips were asked to recount the history of Bella Vista in one slim volume -- the kind of pictorial publication pursued around the country by Images of America -- the story easily divided itself into five eras.

It starts around the time of the Civil War, when travelers from Union states started to settle in the hills that became Bella Vista, joined by others already living in the area who saw opportunity in the largely unsettled area.

It continues with the Linebarger resort years from 1915 to 1951, when tourists spent their summers boating on Lake Bella Vista, playing tennis and golf, lounging by the "largest open-air concrete swimming pool in Arkansas" and dancing the night away inside Wonderland Cave. The Keith resort years from 1952 to 1963 saw a dam built across Big Spring Creek, the creation of a trout farm, roller skating instead of dancing and the transformation of the Sunset Hotel to the Baptist Institute of the Ozarks.

It was in 1962 that a developer named John Cooper Sr. showed up to transform the summer resort to a year-round retirement community. The last section of the book looks at the continuing transformation of Bella Vista to a city starting in 2007.

There's a simple common thread, says Phillips, pausing on a sunny Monday afternoon to sit down with a reporter for a "new normal" in-person interview. Bella Vista is, and always has been, made up of people who came from all over, all of them following a common desire -- for land, for recreation, for an idyllic location and now, for a community that offers all those things rolled into one.

In fact, that's what brought Phillips to Bella Vista in 2017. After 41 years with the National Park Service as a park ranger, his last assignment was the Lincoln Home National Historic Site in Springfield, Ill. Then he and his Louisiana-born, outdoors-loving wife Carol wanted to settle somewhere that had enough recreational fun for her and enough history for him.

He was also intrigued, Phillips says, by how relatively new Bella Vista is in the annals of modern history. It really wasn't settled by those of European lineage until around the time of the Civil War. The first new residents came on the Old Wire Road from Springfield, Mo., or along the Fort Road that bordered Indian Territory in what is now Oklahoma.

"Settlers, using these two routes, would arrive in the years before the Civil War," Phillips explains. Union veterans, who had received land grants, would come after the Civil War to take up farming in the valleys or grazing cattle and quarrying rock in the hills. "Even though there were many veterans, they would still be the minority," he adds, second to local families that moved into the area.

In the first chapter's pictures, the book introduces the early communities of Dug Hill, Summit and Rago -- known for its orchards.

"One of the first families to permanently settle in what is now Bella Vista was Thomas and Lutilla Cunningham and their five children," according to the book. "They came from Kansas in 1904 and bought 243 acres of prime bottomland and forested slopes on the west side of Little Sugar Creek. The Cunninghams established a successful dairy that would end up providing many dairy products for the Bella Vista Summer Resort."

And now you know where the name came from for Cunningham Corner in modern-day Bella Vista.

That's why the details of local history matter, says Phillips.

He says from his National Park Service experience, he knows that people are still interested in history, but they don't want to memorize dates. They want to know why they should care.

"You can always look up dates," he says. "It's 'why' that's important.

"Our hope is that we can educate the huge number of new people that are and will be moving in to Bella Vista about why they should care about the past," Phillips says.

Buying a copy of the new book is also a great way to support the Bella Vista Historical Society and the museum, he adds.

According to Lucas, the book's co-author and president of the historical society, all of the museum's exhibits were initially focused on the Linebarger brothers, the 1917 founders of the Lake Bella Vista summer resort, whose artifact collection was donated by their three granddaughters. Now expanded to 3,000 square feet, the museum has taken on the mission of telling the story of the fast-growing Bella Vista community and those who call it home.

"We had an extremely busy two years in 2018-19 getting the donated 1912 Settler's Cabin moved to our grounds and furnished," Lucas remembers. "That was a BIG project. Our Board held only two meetings this past year, one in January before we closed down, and then one in September just to discuss re-opening, so we haven't yet decided on our next big goals. We do know that we want to continue our mission and attract more visitors to the museum to learn about and appreciate the unique and rich history of Bella Vista. Adding the Settler's Cabin to our grounds certainly helped us attract more visitors."

"We took quite a hit during the pandemic," Phillips adds, which of course forced the museum to close for most of 2020. However, staffed only by volunteers, the museum remained busy collecting and preserving Bella Vista history -- including rescuing a multi-ton concrete tee box from the former location of the Linebarger golf course and continuing to document post-Civil War cemeteries within the community.

"We have started to focus more on Bella Vista cemeteries," Lucas says. "We took on an upgrade of Summit Cemetery, in the Metfield area of Bella Vista, which was deeded to our Historical Society in 2018. Jim Lucas made over 30 white crosses in his workshop, and a work detail team from the Benton County Jail added those crosses to previously unmarked graves. Boy Scout Joshua Mattingly decided that for his Eagle Scout project, he would coordinate the building of additional fence around the cemetery. It turned out really good!

"We are now starting work on another larger one, Beavers Cemetery in the northwest corner of Bella Vista, and would like to get it into the same shape as we did the Summit Cemetery. We have also done some cleanup work on two small cemeteries here, Nott and Mills."

"We're generally in good shape," Phillips agrees. But it will take funds to continue the museum's work and new volunteers to return the facility to a five-day-a-week schedule. He hopes buying a book will be a good way to start. 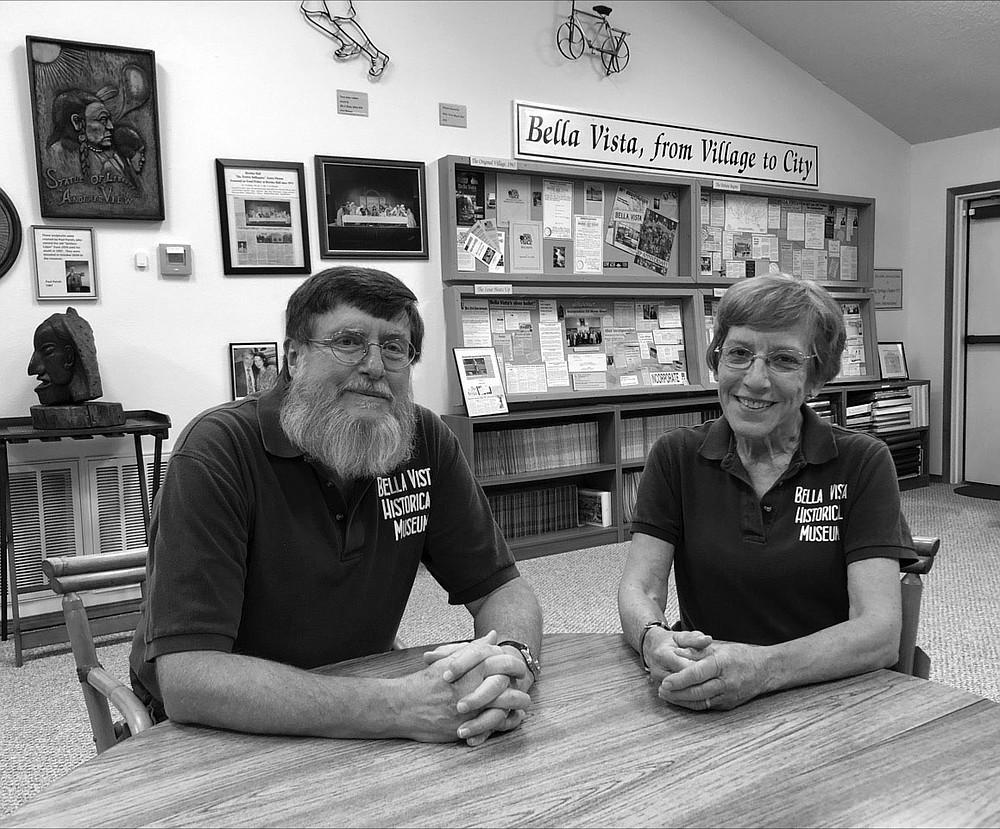 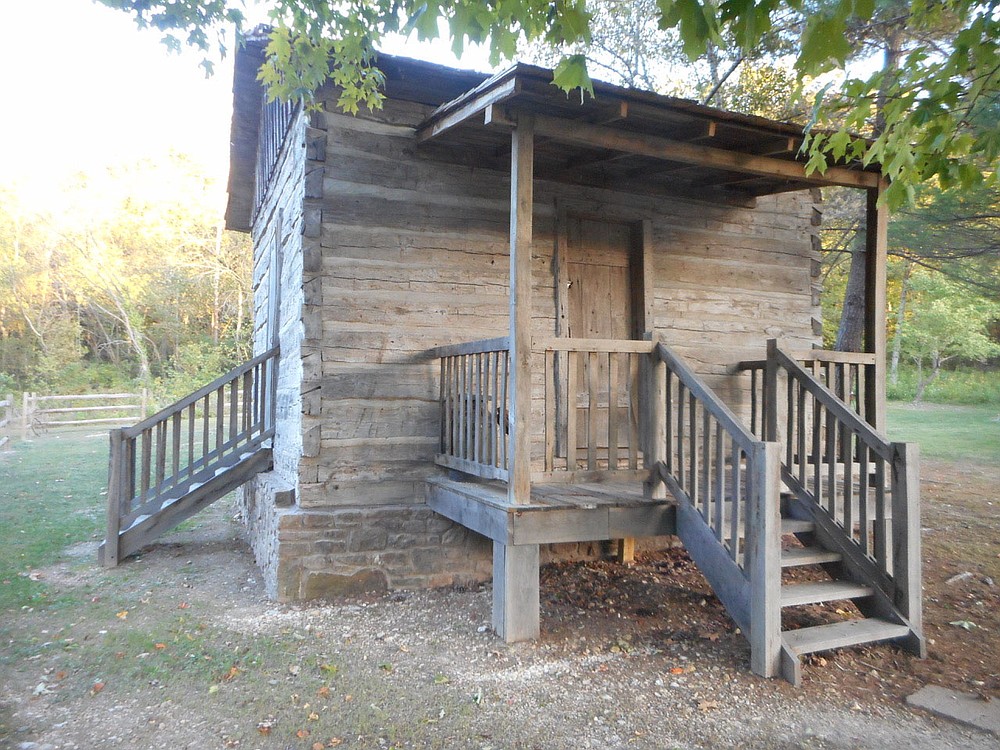 The Settler’s Cabin is currently the most popular exhibit at the Bella Vista Historical Museum, according to Xyta Lucas. It was built around 1912 in what became The Highlands of Bella Vista, later used as an art studio and donated to the museum in 2018. It is now fully furnished, thanks to donations and the work of volunteer Carol Phillips. (Courtesy photo) 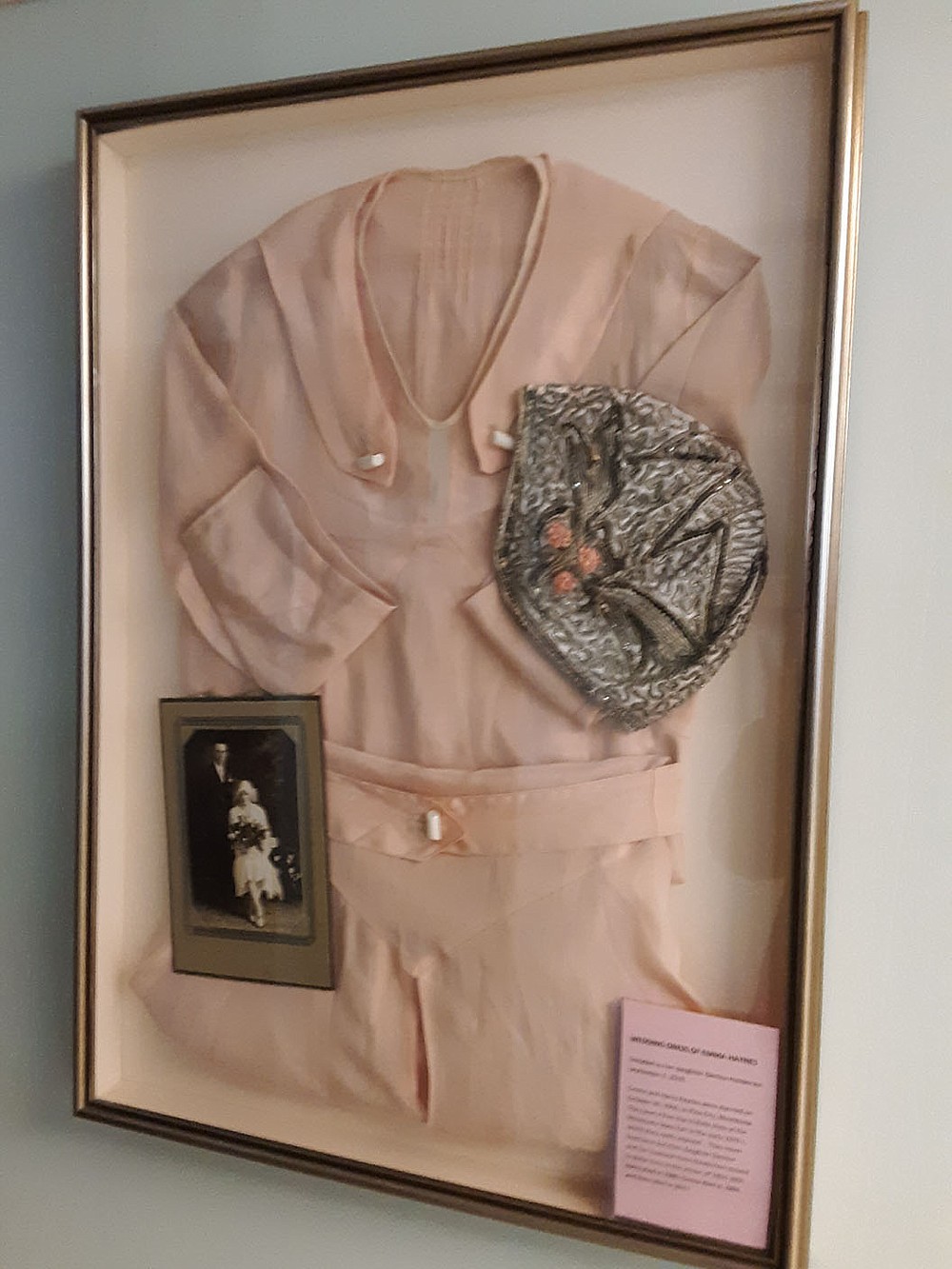 This is the dress worn by the bride when Emma and Harry Haynes were married Oct. 30, 1930, in Pine City, Minn. They visited Bella Vista in the 1970s, having won a free trip at the Minnesota State Fair. The dress was donated to the Bella Vista Historical Museum by daughter Glenice Henderson. (Courtesy image) 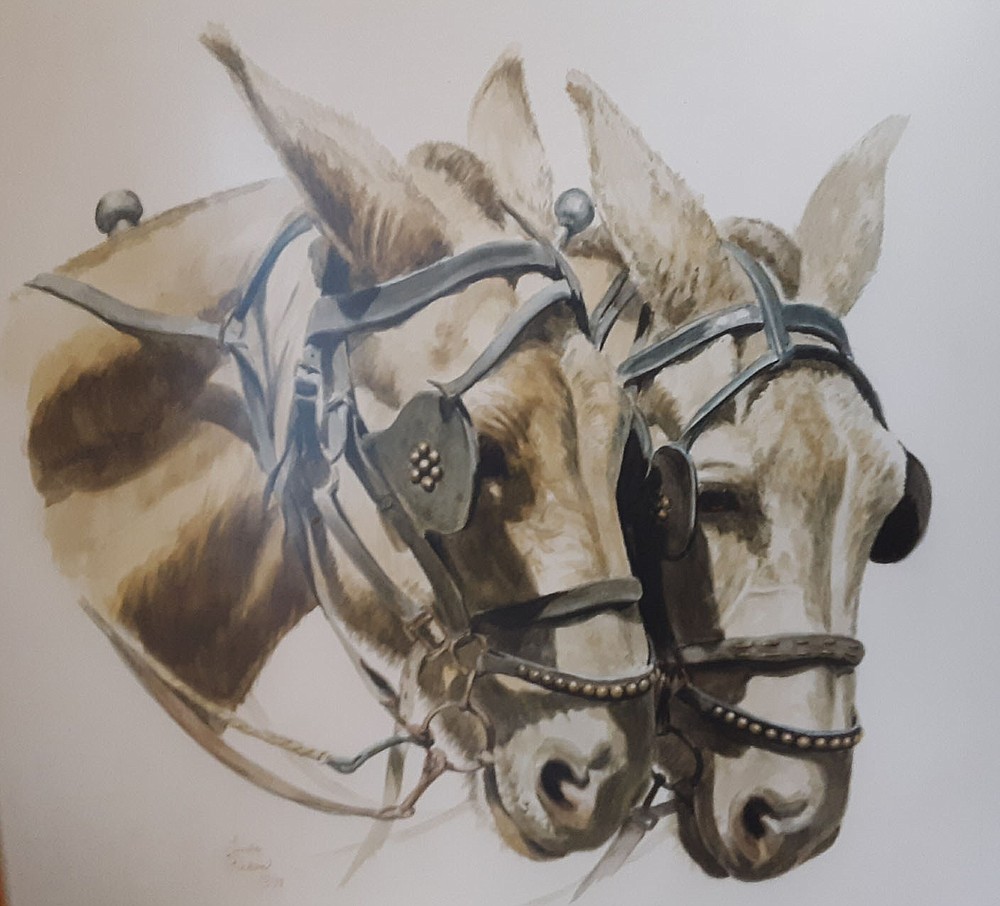 In 1966, John Cooper Sr. bought a team of mules in south Arkansas to pull a western-style wagon from Arkla Village to Bella Vista, creating publicity for the new Northwest Arkansas retirement community. The mule team, which hauled visitors around the village in 1966-67, was sketched by Linda Pickens about 1979. (Courtesy image) 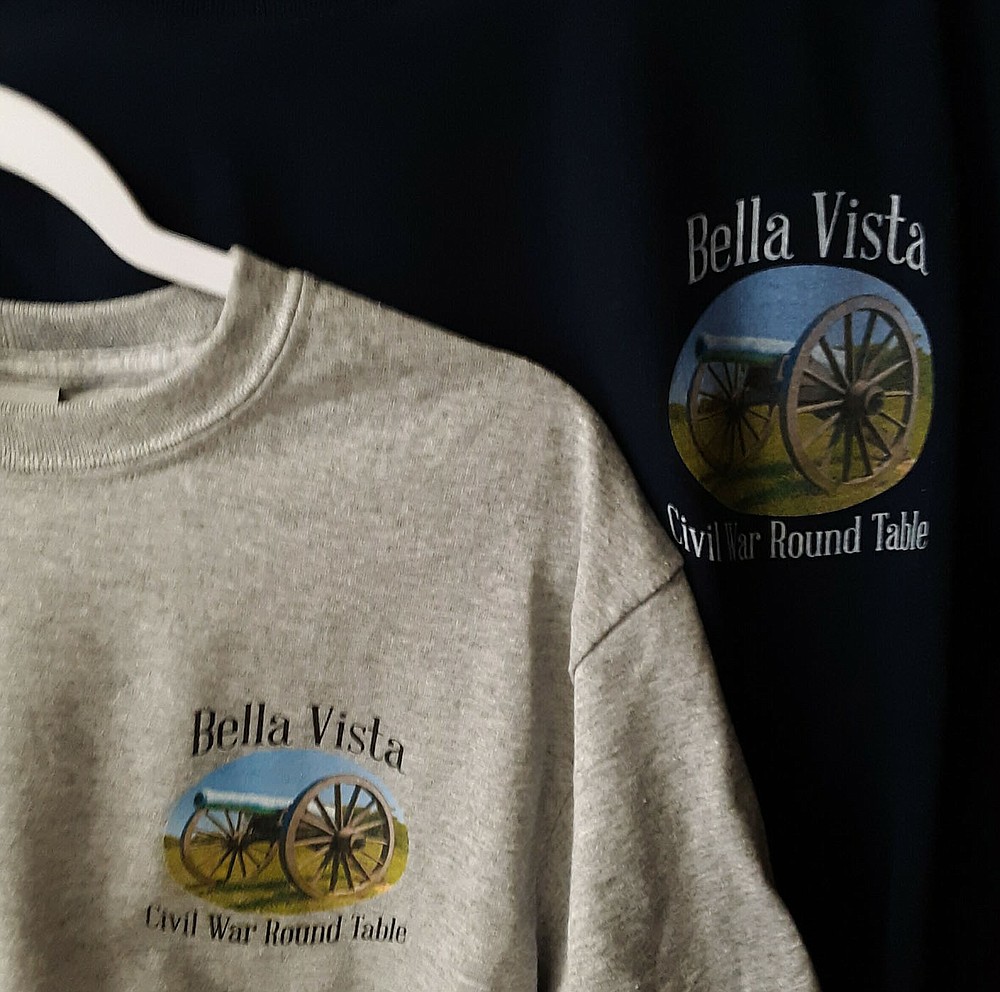 Cost: Admission to the museum is free; the book is available for $22