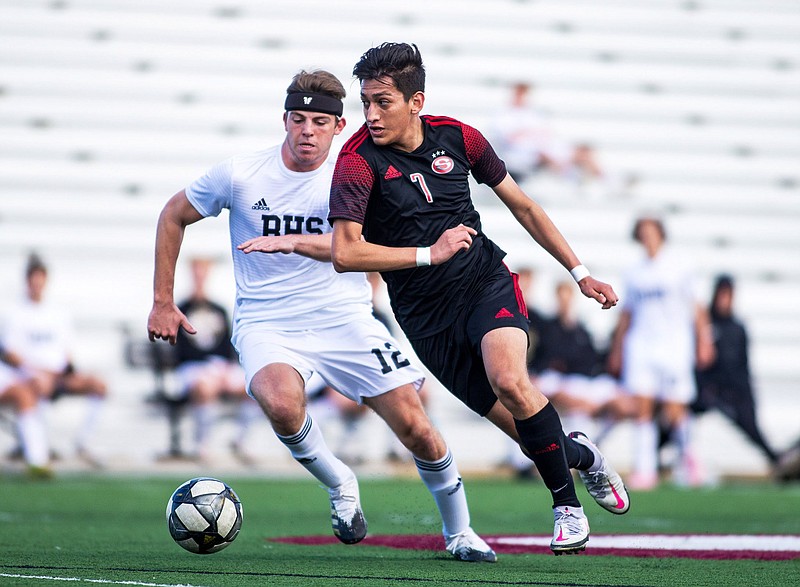 SPRINGDALE -- Two goals by Edwin Lara was enough to decide a showdown between top teams in the 6A-West Conference.

Lara scored goals in each half to give Springdale High a 2-1 victory over Bentonville on Wednesday at Jarrell Williams Bulldog Stadium.

Lara's second goal provided some cushion against Bentonville, which scored on a goal by Andrew Wagner with 13 minutes left to play. Bentonville had other chances in the final minutes of play but Springdale (5-2-1, 5-0-1) held on to take over first place in the league.

"(Lara) got us a goal in the first half when I felt like Bentonville was controlling the game," Springdale coach DJ Beeler said. "When the ball fell to him, he did a good job to finish. His goal in the second half was definitely a quality goal. It was a good individual effort."

A game dominated by defense was anticipated after both teams posted shutouts during league play on Monday. Bentonville defeated Rogers 4-0 while Springdale shut down Fayetteville 2-0. Lara provided the spark Springdale needed when he scored with 25:42 left in the first half. Lara then provided Springdale with a cushion when he scored again to give the Bulldogs a 2-0 edge with 21:57 left in the match.

Lara's first scoring play began when Springdale goalkeeper Cesar Rizo sent a long kick away past midfield. Bentonville and Springdale players jostled for possession before Lara gained control and booted the loose ball about 25 yards into the net.

"We had a goalkeeper injury to Abram Cordero in the Har-Ber game and Cesar's done an amazing job since he's stepped in," Beeler said. "I couldn't ask more from him."

Bentonville had an excellent chance to tie late in the first half after Mason Krakau gained space to the right of the Springdale goal. But Krakau's kick with the opposite foot went wide of the net to leave Springdale with a 1-0 lead after 40 minutes of play.

Wagner had two chances to score in the first half but he was stopped by Rizo both times. Wagner got behind the Springdale defense and kicked hard toward the goal while attacking from the wing near the home side at Bulldog Stadium.

But the kick toward the far side of the net hit the post and bounced back into the arms of Rizo, who smothered it for the save. Midway through the first half, Wagner sent another solid kick toward the goal from about 15 yards out but Rizo again made the save.