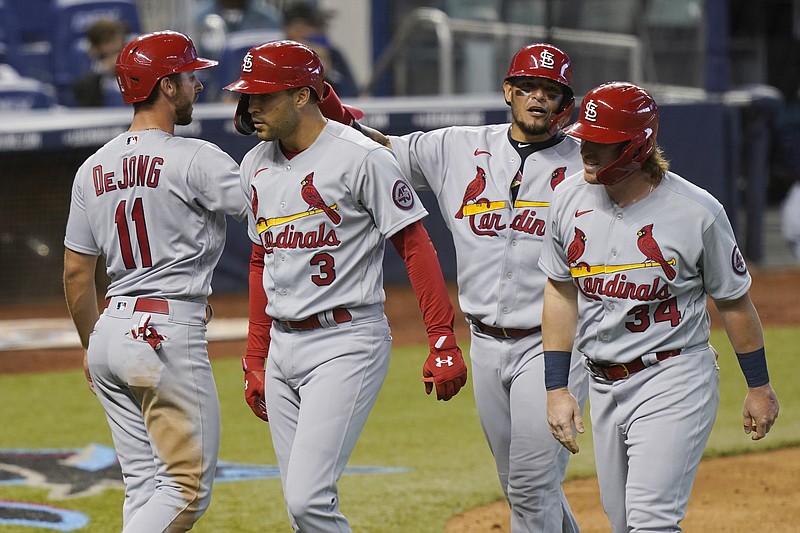 MIAMI -- Yadier Molina hit a two-run home run and Dylan Carlson added a grand slam, leading the St. Louis Cardinals over Miami 7-0 Wednesday for a three-game sweep that dropped the Marlins to 1-5 for the first time since 2015.

Jack Flaherty (1-0) allowed one hit in six innings, a leadoff single by Corey Dickerson, who advanced on a walk before he was caught stealing. After another walk, Flaherty settled down. He allowed only two more runners, both on walks, and struck out six.

Flaherty had given up six runs over 41/3 innings at Cincinnati on opening day.

"Early on I wasn't locating my fastball," Flaherty said. "The last game was the same thing. As the innings went on, I was able to attack more, establish my fastball and pitch off of that. I got to a lot better counts."

St. Louis had advanced just one runner to scoring position before the seventh. Molina homered for a 2-0 lead in the inning, and he drove in the go-ahead run in each game of the series. Matt Carpenter had drawn a two-out walk, ending a string of 10 batters in a row retired by Lopez.

BRAVES 7-2, NATIONALS 6-0 Atlanta pinch-hitter Pablo Sandoval drove a two-run home run to the deepest part of the ballpark off a Washington reliever who took over after Stephen Strasburg's six scoreless innings, lifting the Braves to a victory over the Nationals and a doubleheader sweep. Sandoval drove a 96 mph fastball from Tanner Rainey (0-1) more than 400 feet after Dansby Swanson's two-out single in the seventh and final inning. Ronald Acuna Jr. doubled and had two singles as Atlanta won the opener.

BREWERS 4, CUBS 2 (10) Lorenzo Cain hit his second home run of the game, a three-run shot in the 10th off Brandon Workman (0-1) as Milwaukee beat Chicago.

REDS 11, PIRATES 4 Tyler Naquin hit a leadoff home run off Chad Kuhl (0-1), Kyle Farmer added a two-run double in the first, and host Cincinnati won its fifth in a row.

ORIOLES 4, YANKEES 3 (11) Orioles right fielder Anthony Santander threw out Gio Urshela trying to score on a fly ball in the 11th, moments after pinch-hitter Chance Sisco's go-ahead single in the top of the inning, as Baltimore beat New York.

INDIANS 4, ROYALS 2 Jose Ramirez's second two-run home run of the game snapped a tie in the eighth against Greg Holland (0-1). Shane Bieber struck out 12 for the second consecutive game, allowing 2 runs and 3 hits in 61/3 innings for Cleveland.

ATHLETICS 4, DODGERS 3 Mitch Moreland hit an RBI single off Jimmy Nelson (0-1) with one out in the 10th, and Oakland got its first win after coming within one loss of what would have been its first 0-7 start. 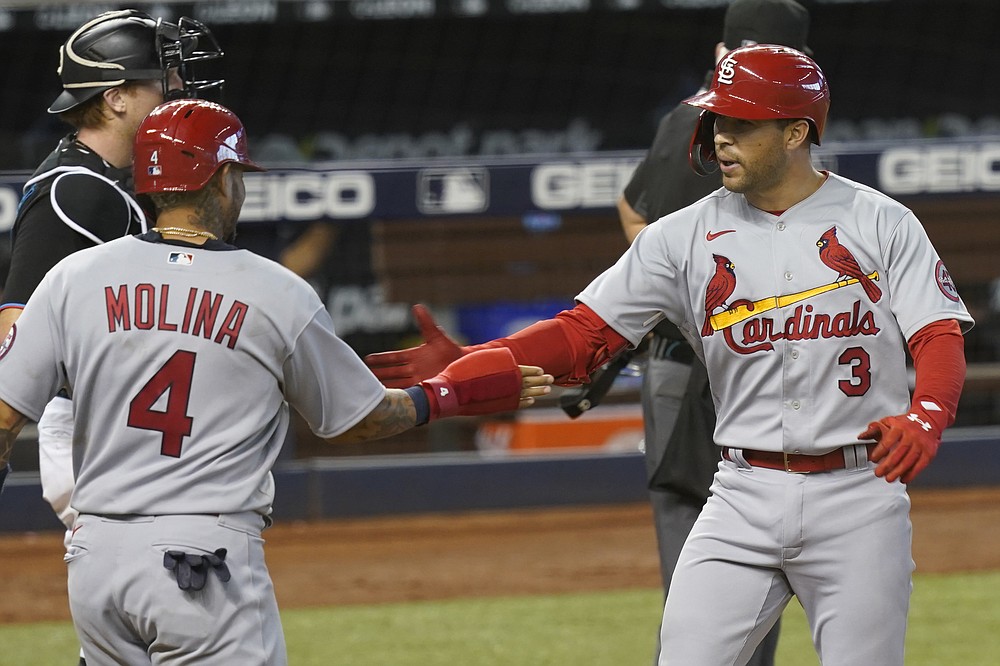 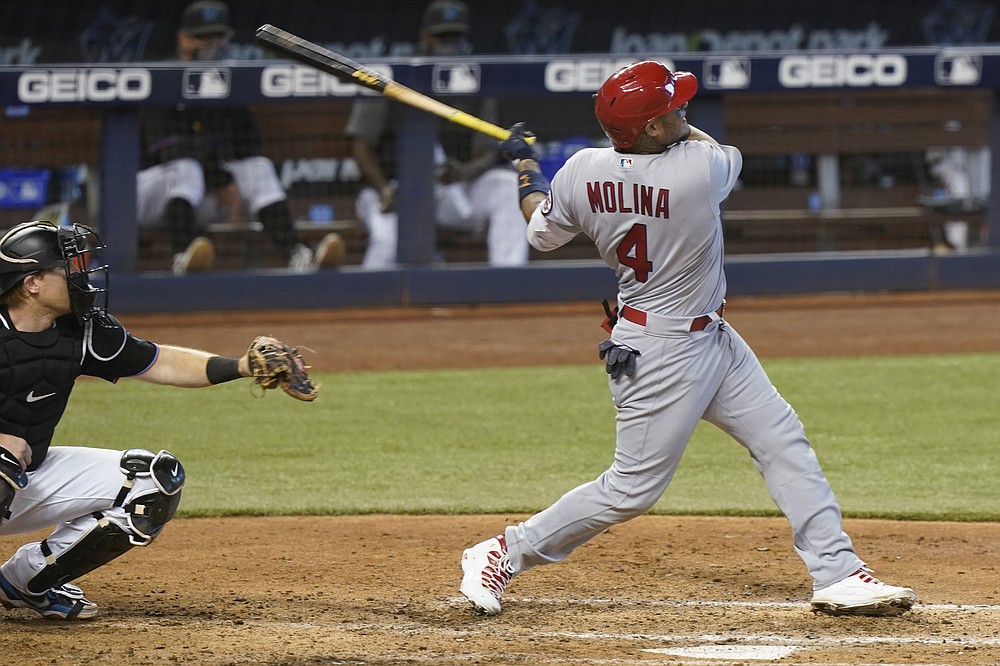 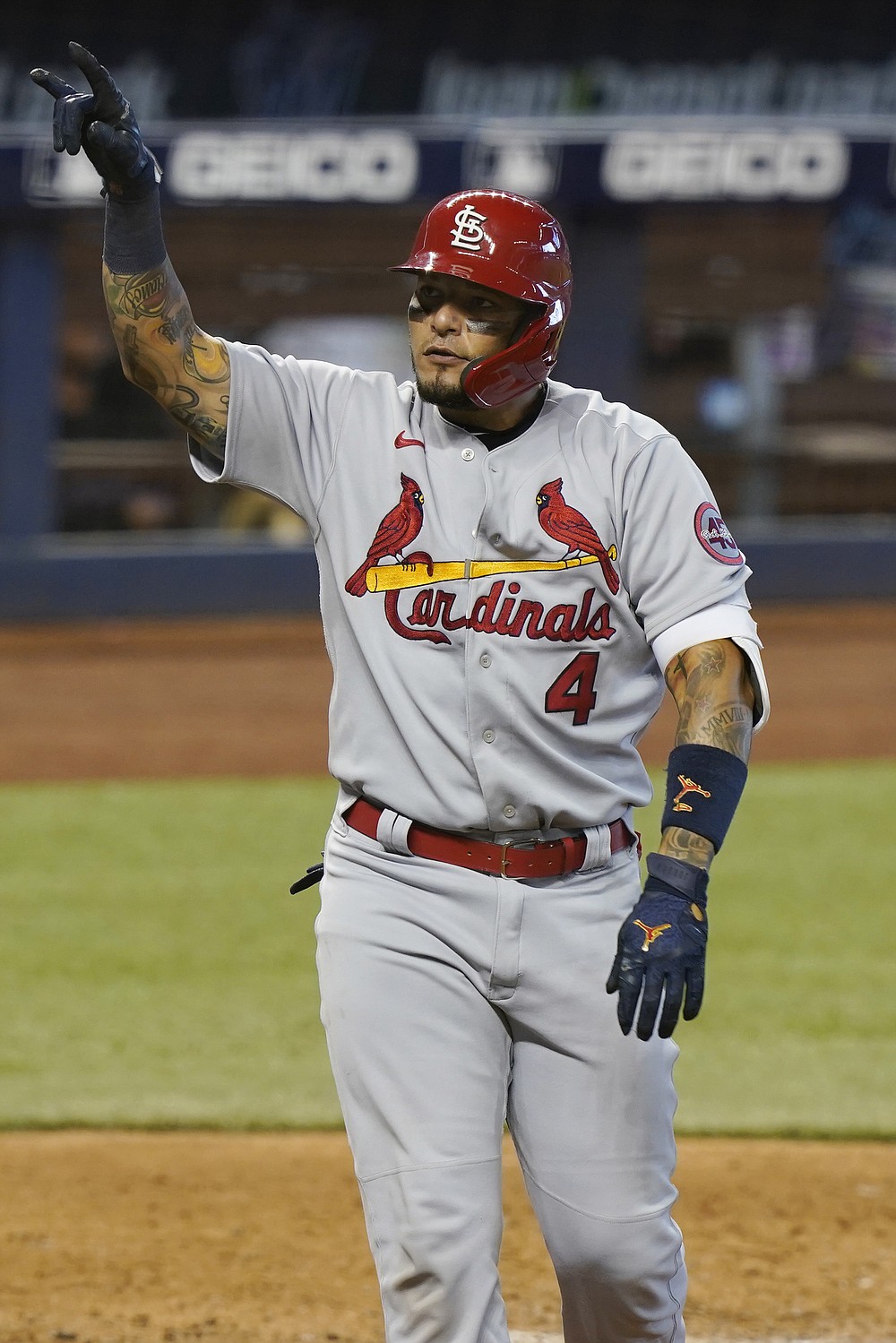 St. Louis Cardinals' Yadier Molina (4) gestures to fans after hitting a home run in the seventh inning of a baseball game against the Miami Marlins, Wednesday, April 7, 2021, in Miami. (AP Photo/Marta Lavandier) 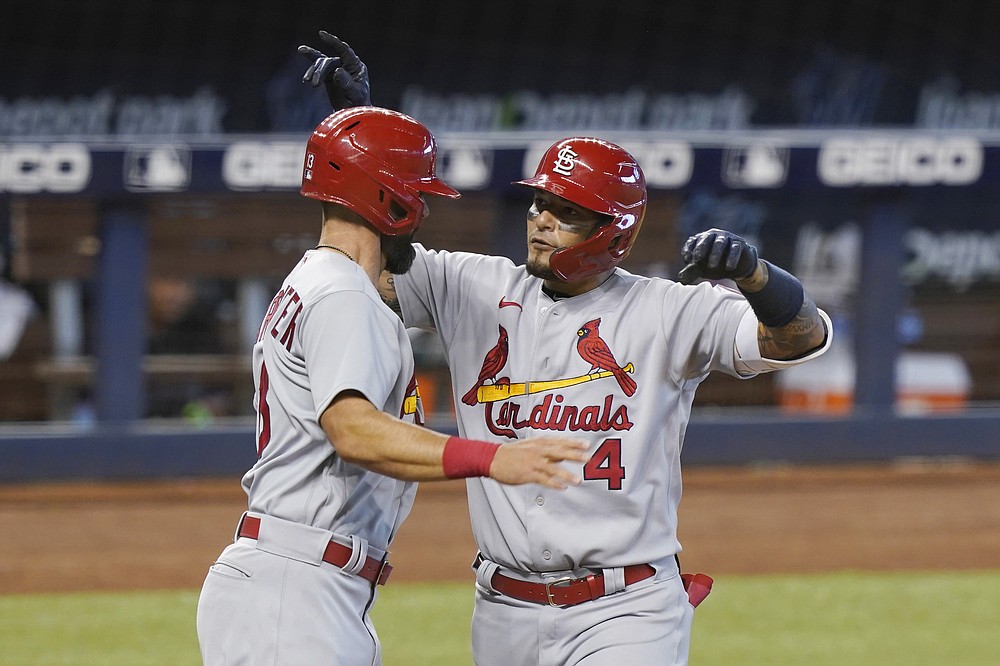 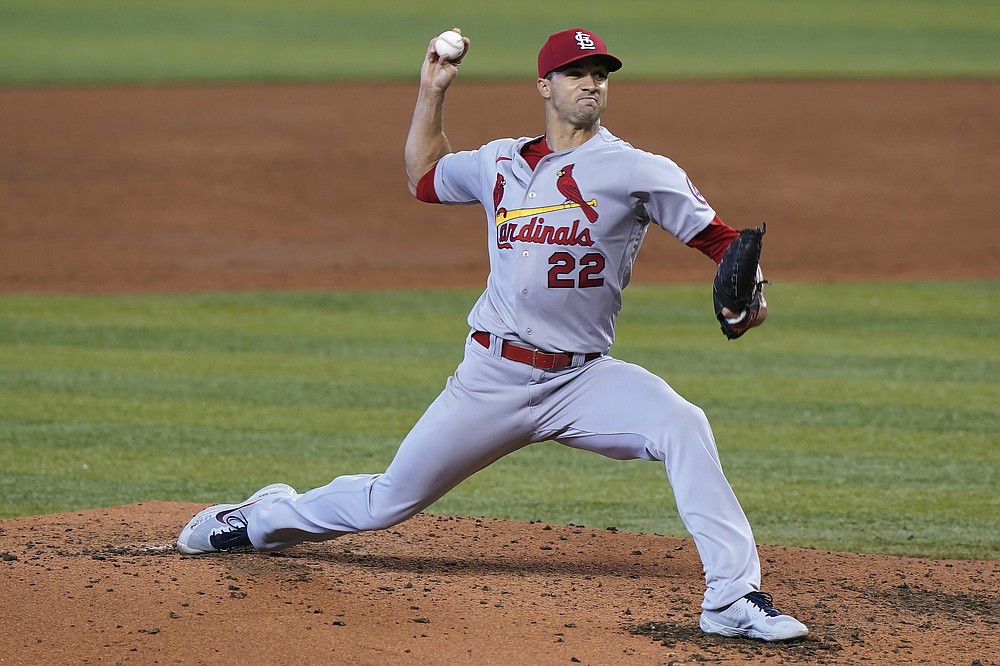 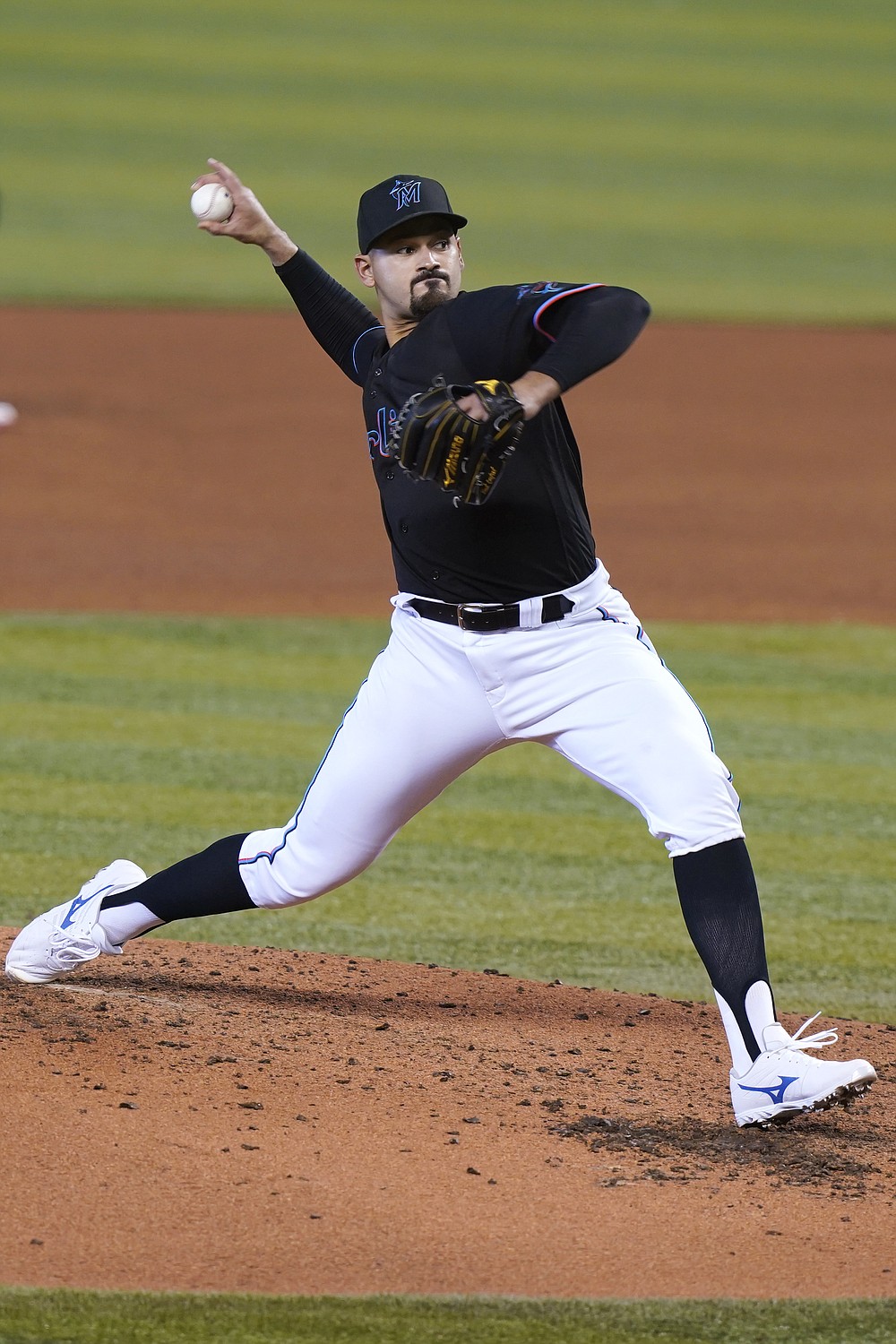