Hogs get 5-7 Lykes in portal 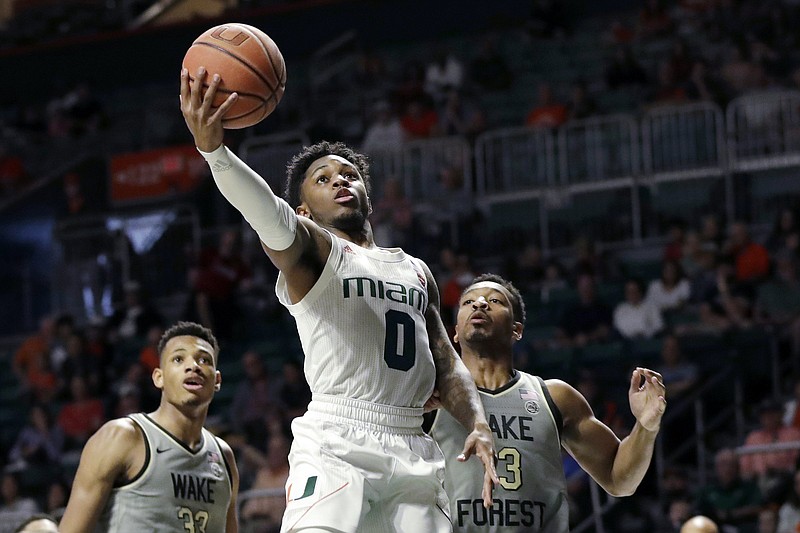 Guard Chris Lykes, who is transferring to Arkansas, was a preseason all-Atlantic Coast Conference selection for Miami this season after averaging 15.4 points, 2.4 assists and 1.1 steals per game as a junior. He only played in two games this season after suffering an ankle injury. (AP file photo)

Lykes, 5-7, 160 pounds, narrowed his list to Arkansas and Southern California before selecting the Razorbacks. He is the No. 6 transfer available, according to Busting Brackets. The Athletic lists him at No. 30.

He was a preseason first-team all-ACC selection last season, but he played in only two games as a senior after suffering an ankle injury.

"Chris is a proven, dynamic guard who has excelled in the ACC," Musselman said in a statement announcing the transfer. "He has the ability to score and get his teammates involved. We like how he attacks the paint and gets to the free throw line. He also has shown great leadership. We are very excited to have Chris join our program and our fans will enjoy watching him play."

Musselman's NBA background and ability to develop players along with having Earl Boykins -- who at 5-5 played 13 years in the NBA -- on staff as director of student-athlete development helped seal the deal with Lykes.

"What stuck with me was his resume," Lykes said of Musselman. "He's been in the league. He's coached guys my size. He's kind of my size as well.

[Video not showing up above? Click here to watch » https://www.youtube.com/watch?v=v5l8UHzFdWs]

"So my goal is to get to the NBA, and from what I was hearing from the scouts is because I didn't play this year it would be tough for me to really make a name for myself. Going back to college would be important for me."

Arkansas' run to the Elite Eight also gave the Hogs a boost.

"I'm not going to lie, as soon as I entered the portal and Arkansas called my phone, I started doing research," Lykes said. "I didn't know much about the SEC. I've been in the ACC for four years. I started doing my research, and everything is beneficial to what I'm trying to do. It just seems like the perfect fit."

A former ESPN 4-star prospect out of Bowie (Md.) Gonzaga College High School, Lykes picked the Hurricanes over Villanova, Georgetown, Virginia, North Carolina State, Notre Dame and others in 2017. ESPN also rated him the No. 12 point guard and No. 48 overall recruit.

"I have evaluated Chris Lykes since his high school days and have called a few of his games at Miami," ESPN national recruiting director Paul Biancardi said. "Lykes is a dynamic scoring point guard. He finds the arc in transition and has both the confidence and skill to make quick threes.

"In the half court, Lykes can navigate well in ball screens as a shooter behind the screen or as a playmaker to create for others as he can get into the paint. He needs to utilize his size and pressure the ball in the back court more often and with great intensity.

"A battle-tested guard and a tough-minded player."

A two-time All-ACC academic team selection, Lykes started all 32 games as a sophomore and averaged 16.2 ppg. He scored in double figures in 27 games that season, with 10 going for 20 or more points.

Musselman and the staff's desire for him to be a Razorback was strong.

"He just said we need you," Lykes said. "I remember that clearly and it wasn't just him, it was the whole coaching staff. Virtual recruiting I think they did the best job possible."

Lykes is the second transfer to announce plans to play for Arkansas next season. Former Pittsburgh wing Au'Diese Toney announced his plans to transfer last week.

With forward Ethan Henderson on Wednesday joining guard Desi Sills in the NCAA transfer portal, Arkansas is at 12 scholarship players. That number includes Moses Moody, who's a candidate to enter the NBA Draft. The Hogs signed forward Akol Mawein and guard Chance Moore in November.

The NCAA allows 13 players to be on scholarship.