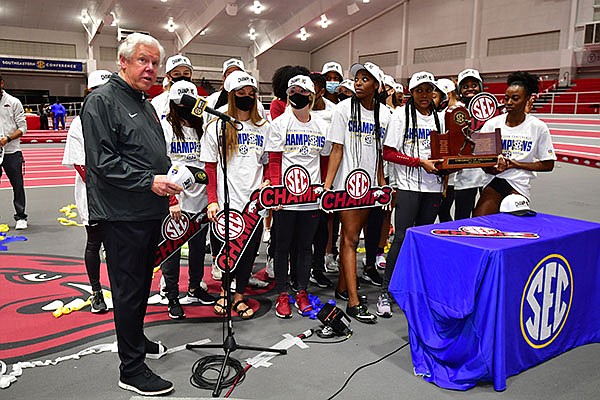 FAYETTEVILLE -- Thirty-one years ago to the day Lance Harter was introduced as the women's cross country and track and field coach at the University of Arkansas on April 16, 1990, he'll be inducted into the Arkansas Sports Hall of Fame.

Harter is among the Hall of Fame's nine newest members set to be honored at a banquet April 16 at the Statehouse Convention Center in Little Rock.

In between the dates of Harter's introduction and induction, he has led Arkansas to six national championships and 40 SEC titles, including a national indoor track and field crown and conference cross country and indoor titles in the 2020-21 school year. Harter has been national coach of the year eight times and SEC coach of the year 41 times.

"Coach Harter is a track genius, which is why he's doing so well," said Arkansas senior distance runner Krissy Gear, one of 149 All-Americans Harter and his assistants have coached to a combined 444 first-team honors. "He has a million different ideas running around in his head, and by the end of the day, he always figures out what's the right one to make us successful."

"I think this will be the last Hall of Fame for me, and it's a real honor to be inducted into a Hall of Fame for anyone who has ties to Arkansas, that encompasses the whole state," Harter said. "I think that makes it so special."

When Harter left Cal Poly to come to Arkansas, he assumed he would be coaching in the Southwest Conference. Less than four months after he took the job, Arkansas announced it would be joining the SEC.

"The Southwest Conference had great track and field, but the SEC was synonymous with success," said Harter, a standout distance runner at Texas Tech. "I knew we were getting ready to compete with the best of the best."

Arkansas' first SEC competition was at the 1991 cross country championships in Athens, Ga., where Harter's Razorbacks won with 30 points. It was the first of 21 SEC cross country titles Arkansas has won along with 11 in indoor track and 8 outdoors.

"It didn't take too long to adjust, but I definitely had to escalate our recruiting to be able to handle the challenge that the SEC offers in each and every sport," Harter said. "It was full bore ahead.

"It's such an honor to win the SEC title, because that means you're a player at the national meet as well."

Arkansas consistently was among the top teams nationally under Harter, but the program has risen to a new level in winning six NCAA championships since 2015, with three indoor track titles along with two outdoors and one in cross country.

During the 2019 calendar year, Arkansas swept all three national titles.

"Lance is a good man, and he has a heart for people, especially the young people he coaches," said Kentucky Coach Lonnie Greene, who was Harter's assistant coach at Arkansas for 16 years. "Every young woman he's coached, they're in his heart. He can tell you where they are now, what they're doing, how many children they have.

"With Lance, it's not just, 'You come run for me and I'll make you better.' Lance wants to know that when you leave him, you're going to do better in life."

Bev Lewis was the Arkansas women's cross country and track coach from 1981-90, then hired Harter to replace her when she became athletic director for the women's department, which at the time was separate from the men's.

"I told Lance I was going to step away from coaching to be AD and said, 'I'm trying to find my replacement, and I want someone better than me that can take the program to the next level,' " Lewis said. "I still was going to be the coach that school year, so he had lots of time to think about it.

"Lance was the only one I targeted. I knew he was a quality coach, and I saw what he did winning 14 Division II titles. His kids in Division II would have been competitive in Division I, so I knew he could recruit and coach on that level.

"I watched him with his kids, and I could see the rapport he had with them and how well they liked him. He was very well respected in the coaching field."

Lewis also knew major Division I programs had not been able to persuade Harter to leave Cal Poly.

"I decided I'd give him lots of time to think about my offer, because he's one of those guys that researches everything," Lewis said. "I gave him phone numbers of our other women's head coaches and some of the staff, and said, 'You call and ask them any questions you want about me, about what it's like to live in Fayetteville, what it's like at the university and in the athletic department.'

"I was hoping he could see the potential."

Harter said his main reason for turning down the USC, UCLA and Cal jobs was the salary offered wouldn't allow his family to live close to work because of the high cost of living in Los Angeles and the Bay Area.

The Tennessee job came open when Terry Crawford left for Texas -- where Harter also was finalist -- but he said becoming the Vols coach didn't seem like the right fit.

After taking a visit to Fayetteville, Harter decided Arkansas was the new challenge he needed.

"With those other offers, in my gut I just knew it wasn't the right job at the right time," Harter said. "When I came out to Fayetteville, it was a slam dunk."

Lewis said she had an advantage in persuading Harter to come to Arkansas because as his new athletic director, she had coached his sport.

"Lance knew I understood his job and that I'd be supportive," she said.

Dominique Scott, who won the 5,000 and 10,000 meters for the Razorbacks at the 2016 NCAA Outdoor Championships, came to Arkansas from Cape Town, South Africa.

"When I was at the University of Arkansas, I often referred to Lance as my USA dad," said Scott, who competed in the 2016 Olympics for South Africa. "I just felt so comfortable being around him.

"I felt like he really had the best intentions for me and for my career. Having a coach that you feel like you can trust and wants the best for you, and not only for the program, really allows you to buy into the coaching and trust the process."

"Coach Harter's workouts and training plan are a work of art," she said. "The people that he recruits, the culture that we create as a team and how we all support and love each other is amazing."

Lewis said keys for Harter's success include his vast experience, but also his approach to coaching athletes as individuals and how well he treats his assistant coaches.

"Lance figures out how to motivate each athlete and get the best out of them," Lewis said. "It's a real skill, and he just has the right personality for it.

"Then his training knowledge is so good. He's been able to hire a great staff. It's just been nice to see it all come together for him."

Harter turns 71 on April 15, but said he has no plans to retire.

"Lance has got more energy than some coaches who are 30 or 40 years old," Greene said. "He can still relate to the 18- to 23-year-olds he's coaching, and they can relate to him.

"That's an art. Some coaches need to go find a younger coach who can relate to kids today, but when Lance leaves a family's living room, the young lady is like, 'I'm going to Arkansas.'

"It's his genuineness. He's very sincere. Lance is more concerned about what's good for other people than what's good for Lance. People pick up on that quickly, especially mothers and fathers when they're getting ready to send their daughters to college."

Harter said that as long as he's healthy, he wants to coach.

"I really look forward to going to work," he said. "I love being around the kids and coaching them, helping them reach their goals and dreams."

Arkansas has won 19 of the past 20 SEC competitions in cross country and indoor and outdoor track.

"When it comes to championship time, all the points count the same," Harter said of dividing up 18 scholarships among the distance runners he specifically coaches, and with assistants Bryan Compton (field events) and Chris Johnson (sprinters and hurdlers). "So if the points come from a pole vaulter, or a 100-meter runner or a 10,000-meter runner, it doesn't matter as long as we're scoring.

"Some years it might be a banner year for vaulters or sprinters, and we'll exploit that. What's really nice about our staff is we share amongst each other."

"Lance has the ball rolling now," she said. "Every year they're getting great recruits and are winning again and again. It's just kind of like a well-oiled machine. It doesn't seem like he's going to be slowing down any time soon."

Harter used to joke that he couldn't get a tan at Arkansas because he was in the shadow of John McDonnell, who led the men's cross country and track teams to 40 NCAA championships and 84 conference titles from 1972-2008.

"John was always very supportive of the women's program, but he really created a monster with his program and worked his tail off to keep feeding it," Harter said. "So even when we were getting second or third nationally and bringing home a trophy and winning SEC titles, it kind of went unnoticed because of the dominance John had created."

Harter has created his own monster with the women's program and emerged from McDonnell's shadow, as evidenced by his induction into the Arkansas Sports Hall of Fame.

"I am definitely getting a tan now," Harter said with a laugh. "I just bought two cans of sunscreen."

The first in a series profiling inductees into the Arkansas Sports Hall of Fame Class of 2021. The induction ceremony will be held at 6:30 on April 16 at the Statehouse Convention Center in Little Rock.

Lance Harter at a glance