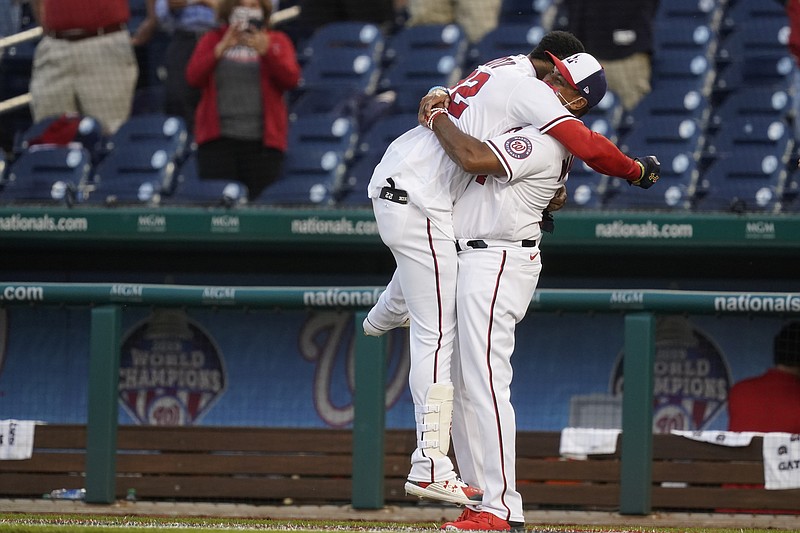 Until Tuesday. Until the coronavirus-depleted Washington Nationals finally started their season, five days later than scheduled because of an outbreak that involved 11 players. Until Soto stepped to the plate in the bottom of the ninth inning with the scored tied, two men aboard and what up to then was an 0-for-4 day, and watched three consecutive balls go by from lefty reliever Will Smith.

"I would have been real upset," Nationals Manager Dave Martinez said, "if he took a 3-0 strike."

Soto did not. Instead, the 22-year-old lashed a line drive to center field for the first walk-off hit of his major-league career, providing Washington with a 6-5 comeback victory over the NL East rival Atlanta Braves.

Soto tossed his red helmet high in the air before being mobbed by teammates who sprinted from the home dugout to meet him near second base, jumping and shouting and dousing him with water.

It was quite the finish for the Nationals, whose day did not begin auspiciously.

Max Scherzer's first pitch of 2021, a 94 mph fastball, was hammered by Ronald Acuna Jr. for the first of four home runs the Braves hit off the three-time Cy Young Award winner.

That meant the Braves delivered four solo shots through 10 batters, one more run than they managed to score in three full games combined while getting swept at Philadelphia to begin their season.

CARDINALS 4, MARLINS 2 Yadier Molina hit a tiebreaking sacrifice fly off former batterymate Sandy Alcantara to cap a three-run rally in the sixth inning that sent St. Louis over Miami. Dylan Carson hit his second home run of the season for an insurance run in the ninth. The 25-year-old Alcantara (0-1) tied a career high with 10 strikeouts in six innings.

METS 8, PHILLIES 4 Marcus Stroman tossed six sharp innings in his first start since 2019, Dominic Smith and Pete Alonso each hit a two-run home run and the New York Mets beat the Philadelphia Phillies. Didi Gregorius hit a solo homer for Philadelphia, which missed out on its first 5-0 start since 1915.

YANKEES 7, ORIOLES 2 Gerrit Cole struck out 13 and walked none over seven scoreless innings in his most dominant start since joining the Yankees. Cole (1-0) allowed four hits, three of them singles, in the type of the performance that showed why the Yankees made him baseball's highest-paid pitcher in December 2019 with a $324 million, nine-year contract. Jay Bruce backed him with his first Yankees home run, a solo shot in the second off Dean Kremer (0-1), and Aaron Judge added a three-run home run in the eighth.

ASTROS 4, ANGELS 2 Carlos Correa hit a tiebreaking two-run home run in the ninth inning, lifting Houston to the victory. Kyle Tucker and Aledmys Diaz hit back-to-back homers in the second inning for the Astros, who went 5-1 on their six-game road trip to start the season amid incessant booing and jeering as fans react to their sign-stealing scandal in the 2017 and 2018 seasons. Mike Trout hit a 464-foot home run in the first inning for the Angels.

TIGERS 4, TWINS 3, (10) Akil Baddoo added another big hit in this charmed start to his big-league career, lining an RBI single in the 10th inning for Detroit. Baddoo made his debut Sunday and homered on the first pitch thrown to him. Then he hit a grand slam in a 15-6 loss to the Twins on Monday. The rookie entered Tuesday's game as a pinch runner, stayed in to the play the outfield and ended it with a hit to right off Hansel Robles (0-1).

RANGERS 7, BLUE JAYS 4 Nate Lowe homered twice and padded his franchise record for RBI to start the season with four more, leading the Texas Rangers over the Toronto Blue Jays. Ronald Guzman and Jonah Heim also went deep for the Rangers in their first four-homer game in their year-old ballpark.