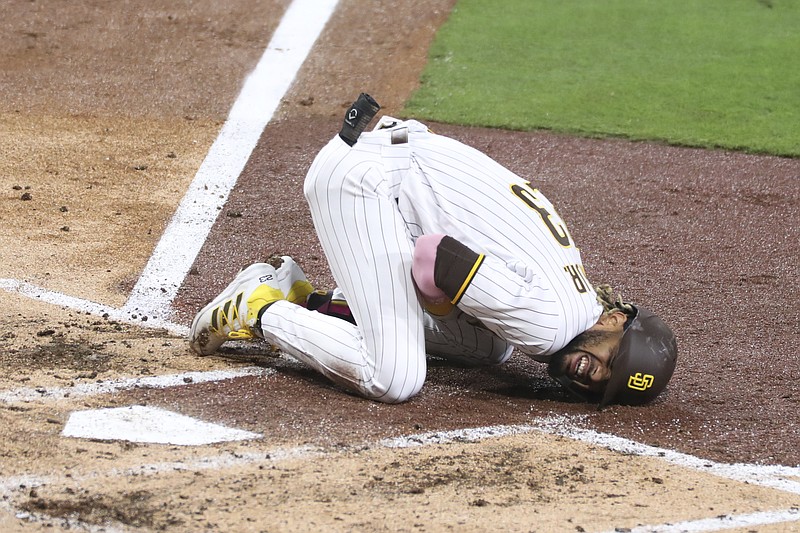 Tatis out with shoulder injury

San Diego Padres shortstop Fernando Tatis Jr. should be able to avoid surgery on his left shoulder, the team said a day after he slightly dislocated it while taking a hard swing. An MRI on Tuesday showed a slight labral tear and the Padres put the 22-year-old on the 10-day injured list. General Manager A.J. Preller said the club wasn't ruling out anything, including Tatis' possible return when he's eligible. Tatis winced in pain as he fell to the ground and cradled his left arm in Monday night's game against San Francisco. Manager Jayce Tingler and a trainer held Tatis' left arm against his body as he walked off the field. According to Preller, doctors said another partially dislocated shoulder could occur again but playing this season wouldn't put him at long-term risk. Tatis experienced left shoulder discomfort twice during spring training, once after sliding headfirst into home plate and again several days later after making a backhanded play and a throw to first. Tatis signed a 14-year, $340 million contract on Feb. 22, the longest deal in big-league history.

Mike Scioscia is taking over as the third manager of the U.S. baseball team in this Olympic qualifying cycle and will try to get the Americans to the tournament in Japan this summer. USA Baseball hired the former Los Angeles Angels manager Tuesday. He will lead a team of minor-leaguers into the second-chance qualifying event, the Baseball Americas Qualifier, to be played in June in Florida. Joe Girardi quit as U.S. manager in October 2019 to pursue a major-league managing job, and Scott Brosius took over. Girardi was hired by the Philadelphia Phillies. Scioscia, 62, led the Angels to a 1,650-1,428 record from 2000-18 and won the 2002 World Series. The U.S. plays the Dominican Republic, Puerto Rico and Nicaragua in Group A at the Americas tournament, and the top two teams advance to the super round along with two teams from Group B, which includes Canada, Colombia, Cuba and Venezuela. The top team from the super round joins Japan, Israel, Mexico and South Korea at the Olympic baseball tournament, to be played from July 28 to Aug. 7 in Fukushima and Yokohama. Only players not on 26-man major-league rosters and injured lists will be eligible to play in the Americas tournament.

Infielder Rougned Odor was traded Tuesday from the Texas Rangers to the New York Yankees for minor-league outfielders Antonio Cabello and Josh Stowers. The 27-year-old Odor did not make the Rangers' opening day roster and was designated for assignment on April 1. He is a left-handed hitter, and the Yankees have a mostly right-handed lineup. Odor is a second baseman but also played third during spring training. He has two guaranteed seasons at $12 million each remaining as part of a $49.5 million, six-year contract. The deal includes a $13.5 million team option for 2023 with a $3 million buyout. Texas will pay the Yankees cash to cover most of what Odor is owed. Odor has a .237 career average with 146 hom runs and 458 RBI in seven major-league seasons. Cabello, 20, hit .251 with 19 doubles, 9 triples, 8 home runs and 40 RBI in the minors from 2018-19. Stowers, 24, has hit .268 with 39 doubles, 12 home runs and 68 RBI over two minor-league seasons.

The Atlanta Braves have acquired infielder Orlando Arcia from the Milwaukee Brewers for right-handed pitchers Chad Sobotka and Patrick Weigel. Arcia had been the Brewers' starting shortstop from 2018-20, but was expected to split time between shortstop and third base this year in more of a utility role. This move clears the way for Luis Urias to take over as the Brewers' everyday shortstop. The Brewers had acquired the 23-year-old Urias along with pitcher Eric Lauer from San Diego in a November 2019 trade that sent outfielder Trent Grisham and pitcher Zach Davies to the Padres. Arcia, 26, has gone 1 for 11 so far this season after hitting .260 with 5 home runs and 20 RBI in 59 games last year. He has batted .244 with a .293 on-base percentage, 42 home runs and 180 RBI in 542 regular-season games. Sobotka and Weigel will report to the Brewers' alternate training site in Appleton, Wis. Sobotka, 27, is 1-0 with a 5.36 ERA in 50 relief appearances. Weigel, 26, has appeared in only one major-league game.

Vanderbilt fired women's basketball coach Stephanie White on Tuesday after five seasons and a 46-83 record. Athletic Director Candice Lee thanked White and her staff for helping the players navigate the challenges during the coronavirus pandemic over the past year. "As I continued my evaluation of the program, I ultimately concluded that change is needed at this time," Lee said in a statement. "I wish Stephanie and her family the best." White went 13-54 in the SEC. Vanderbilt opted out this season after a 4-4 start and 0-3 in the SEC in a decision announced Jan. 18. They had dealt with three cancellations with two SEC games postponed.

The NCAA Division I baseball and softball tournaments will have predetermined sites for regionals and super regionals as a safeguard against covid-19. In a recent memo to Division I baseball and softball administrators, NCAA sports directors said schools are invited to bid to be among 16 regional hosts in each sport. Those sites will be announced the week of April 26 for softball and the week of May 10 for baseball. Eight super-regional sites will be selected from among the 16 regional sites. Traditionally, regionals are awarded to the top 16 seeds announced the day before the 64-team tournament fields are announced. The eight highest advancing seeds typically host super regionals. The rationale for predetermining sites, according to the memo, is that additional time is needed to prepare them for covid-19 testing procedures. The eight super regional winners in softball will play in the Women's College World Series in Oklahoma City beginning June 3. The eight advancing baseball teams play in the College World Series in Omaha, Neb., beginning June 19.

Wisconsin Athletic Director Barry Alvarez is retiring after a three-decade run in which he transformed the university's football team and later guided the Badgers to their greatest all-around sports success in school history. Alvarez, 74, said Tuesday he would retire on June 30. Alvarez arrived at Wisconsin in 1990 as football coach and turned one of the Big Ten's weakest programs into one of its strongest. He became athletic director in 2004 and briefly served in a dual role before stepping down as football coach after the 2005 season. Wisconsin's football team went a combined 9-36 in the four seasons before his arrival. Alvarez led the Badgers to three Rose Bowl titles and made them regular Big Ten contenders by emphasizing a strong defense and rushing attack. Alvarez coached Wisconsin from 1990-2005 and set a program record for career coaching victories. His 119-74-4 mark includes his record over 16 years plus a 1-1 mark as an interim coach in bowl games that capped the 2012 and 2014 seasons. He was inducted into the College Football Hall of Fame in 2010. 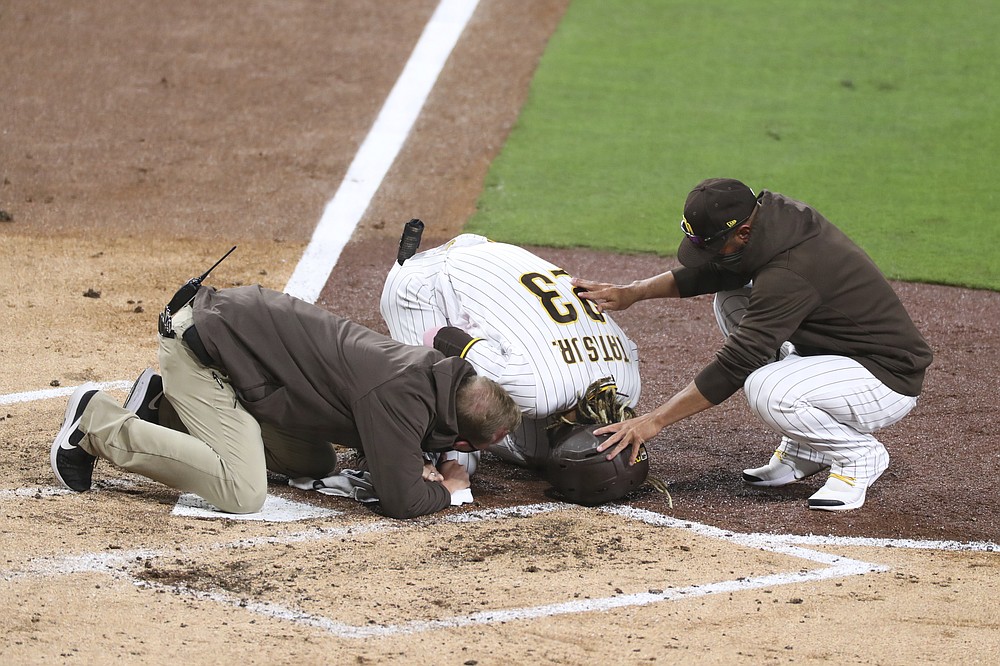 San Diego Padres manger Jayce Tingler, right, and a trainer, left, attend to Fernando Tatis Jr., center, after Tatis hurt his shoulder while swinging at a pitch in the third inning of a baseball game against the San Francisco Giants, Monday, April 5, 2021, in San Diego. (AP Photo/Derrick Tuskan) 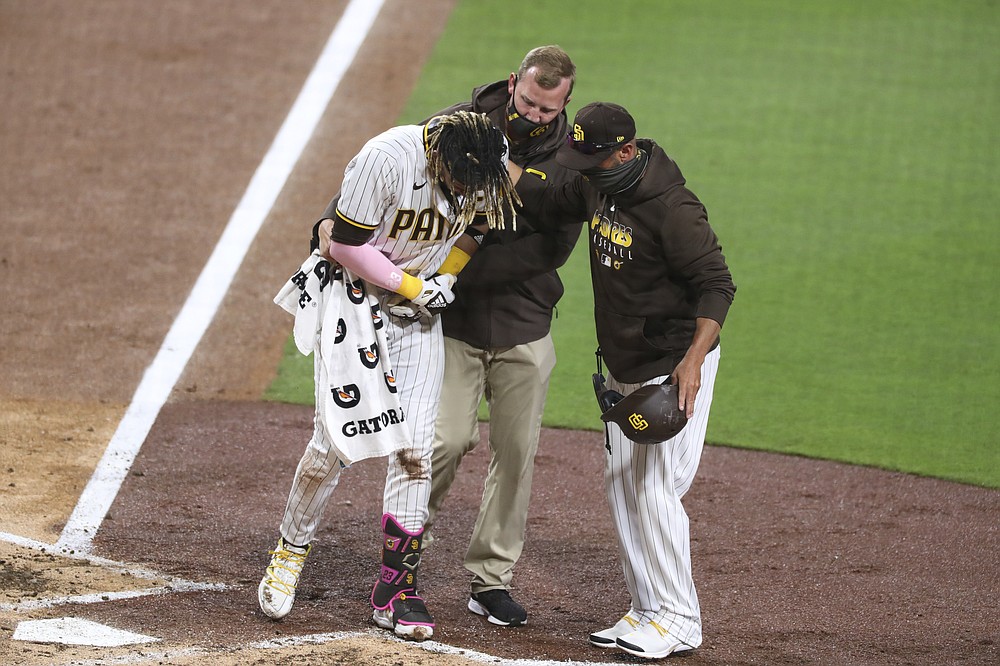 San Diego Padres manger Jayce Tingler, right, and a trainer, center, help Fernando Tatis Jr., left, off the field after Tatis hurt his shoulder while swinging at a pitch in the third inning of a baseball game against the San Francisco Giants, Monday, April 5, 2021, in San Diego. (AP Photo/Derrick Tuskan) 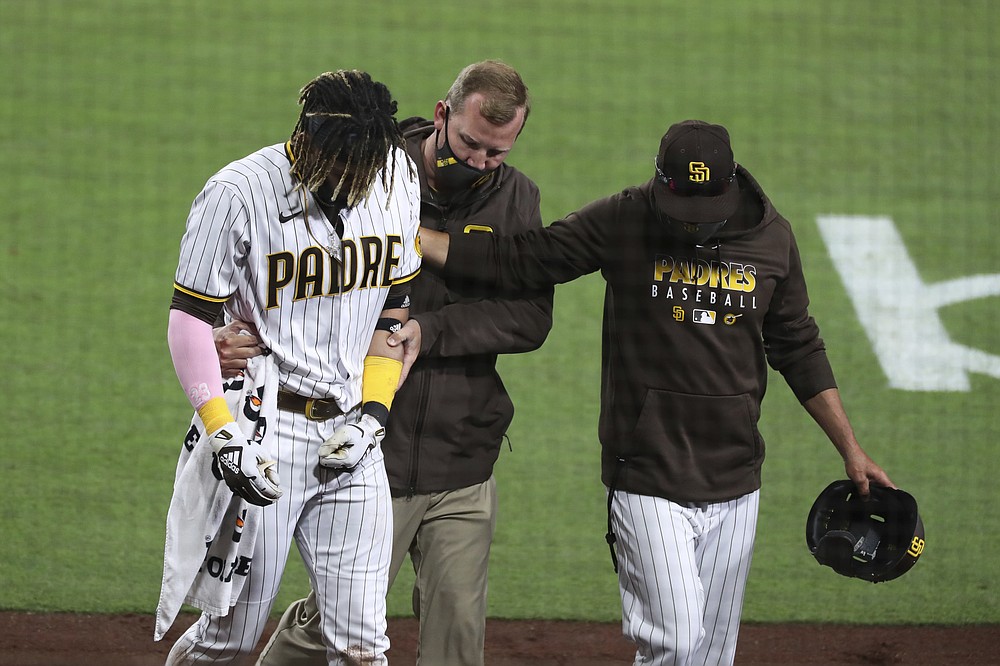 San Diego Padres manager Jayce Tingler, right, and a trainer help Fernando Tatis Jr, left, off the field after Tatis hurt his shoulder while swinging at a pitch in the third inning of a baseball game against the San Francisco Giants, Monday, April 5, 2021, in San Diego. (AP Photo/Derrick Tuskan)
ADVERTISEMENT