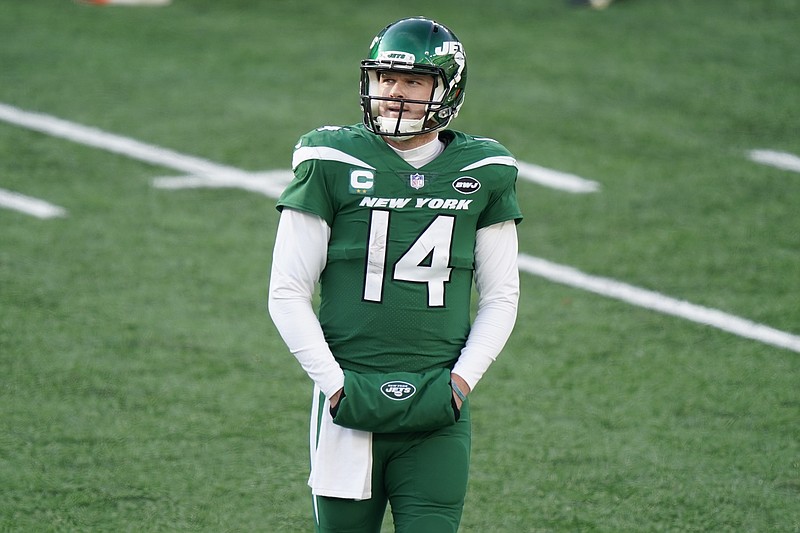 FILE - In this Dec. 27, 2020 file photo, New York Jets quarterback Sam Darnold (14) walks on the field during the first half of an NFL football game against the Cleveland Browns in East Rutherford, N.J. The New York Jets traded Darnold Monday, April 5, 2021, to the Carolina Panthers, ending a stint that was marked by a few flashes of brilliance, inconsistent play, and unfortunate injuries. (AP Photo/Corey Sipkin, File)

After all the agonizing over the "rabbit holes," as the general manger called them, the choice to ultimately trade the promising but inconsistent quarterback was a sensible but far from simple solution.

"We felt like this was the best decision for the entire organization moving forward," Douglas said Tuesday, "and hitting the reset button."

So, the Jets are back in a familiar spot -- searching for a franchise quarterback after dealing Darnold to Carolina on Monday for a sixth-round pick this year and second- and fourth-round selections next year.

New York thought it had its guy only three years ago when then-general manager Mike Maccagnan traded up in the draft to snag Darnold with the No. 3 overall pick. Instead, the Jets will now give it another try -- this time with the No. 2 selection.

"I would say that's a fair assessment," Douglas said when asked whether taking a quarterback at that spot is a safe assumption.

The increasingly swirling speculation has the Jets aiming squarely for BYU's Zach Wilson, especially after Douglas, new Coach Robert Saleh and offensive coordinator Mike LaFleur watched the young QB throw the football all over the field at the school's pro day on March 26.

Pro Football Hall of Famer Steve Young, currently an ESPN analyst and a former BYU star, recently said the Jets "have committed to Zach and recruited the family." Young added that he'd like the San Francisco 49ers, his old team, to get Wilson but thinks New York is locked in on taking him.

"Steve's plugged into BYU pretty well," Douglas said, doing little to diminish those comments but adding he had a "brief" discussion with Wilson's father and agent during the pro day in Provo, Utah. "We're excited about this class and we're excited about this quarterback class. So we still have a lot of our process left in these three-plus weeks leading up to the draft and a lot of productive conversations, conversations in the future coming up."

With Clemson's Trevor Lawrence considered a shoo-in to be taken No. 1 by Jacksonville, there could be an early run on quarterbacks with Wilson, Ohio State's Justin Fields, North Dakota State's Trey Lance and Alabama's Mac Jones all potential top-10 picks.

Douglas acknowledged that the Jets, who finished 2-14 last season, would likely be approaching things much differently if they weren't sitting where they are in the draft. The general manager also said the possibility of drafting a quarterback second overall and keeping Darnold this season was considered.

"If we were picking later -- if we were picking 12, 13, 14 -- we wouldn't be having this conversation," Douglas said. "I think the unique nature of where we are in the draft, picking No. 2 overall, and ultimately we just decided that taking a quarterback at No. 2 and keeping Sam would not be the best decision for the entire organization, the two quarterbacks, the coach and the coaching staff and the locker room."

Darnold's contract situation also played a role in the Jets' decision to move on. He was entering the fourth year of his rookie deal and New York would have had until May 3 to decide whether to exercise Darnold's fifth-year option -- which would have cost the Jets $18.9 million, fully guaranteed -- or possibly let him play out the final year and potentially lose him for nothing in free agency next winter.

"We feel really good about the draft class as a whole, and the quarterback class specifically," Douglas said, "that this was an opportunity to hit the reset button financially, so to speak."