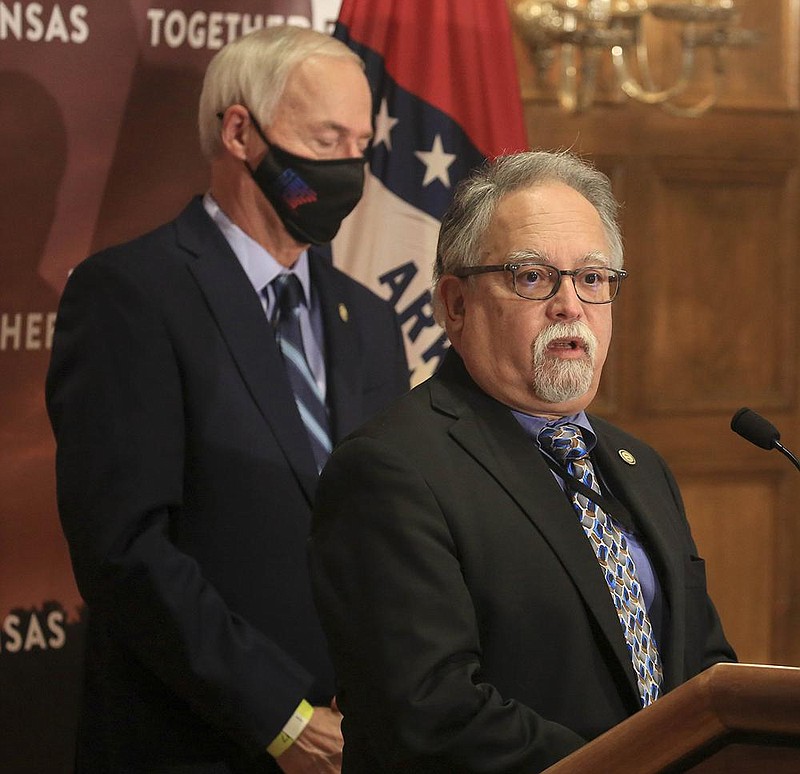 Arkansas' count of coronavirus cases increased Tuesday by 163 - the second daily increase in a row that was smaller than the one a week earlier.

The number of people hospitalized in the state with covid-19 rose by seven, to 152.

The state's death toll from the virus, as tracked by the Department of Health, rose by five, to 5,653.

While Arkansas' daily case increases have been largely trending downward since mid-January, Gov. Asa Hutchinson noted Tuesday that infections have been on the rise in some other states, heightening the importance of vaccinating Arkansans as quickly as possible to prevent a similar uptick.

He said he wants to increase the rate of vaccinations in minority groups, noting that Black people make up about 15.3% of the state's population but just 10.3% of the population that is full vaccinated.

According to a chart he presented at his weekly news conference on the coronavirus, white people make 81.4% of the state's population and 77.5% of those who have been fully vaccinated.

The race of 8% of people who have been fully vaccinated isn't known.

Michelle Smith, director of the Health Department's office of health equity and HIV elimination, said the department has been holding vaccination clinics since January targeting racial and ethnic minorities, people with disabilities, rural communities, faith-based organizations and the elderly.

The department in recent weeks increased the number of employees working at those clinics. It has a goal of administering 8,000 vaccinations through the effort in April, with 50% or more of those vaccinations going to members of minority groups, she said.

Tuesday's increase in cases was larger than Monday's but slightly smaller than the one the previous Tuesday, March 30.

As a result, the average number of cases added to the state's tallies over a rolling seven-day period fell by two, to 154.

That was just above the low for this year of an average of 151 cases added each day during the seven day span that ended Friday.

After falling each of the previous three days, the number of the state's virus patients who were on ventilators rose Tuesday by three, to 26.

The total number of coronavirus cases reported in Arkansas remained at 331,098 Tuesday morning, according to a state website. The death toll remained at 5,648.

[Video not showing up above? Click here to view » https://www.youtube.com/watch?v=Fvl33HWWmqs]