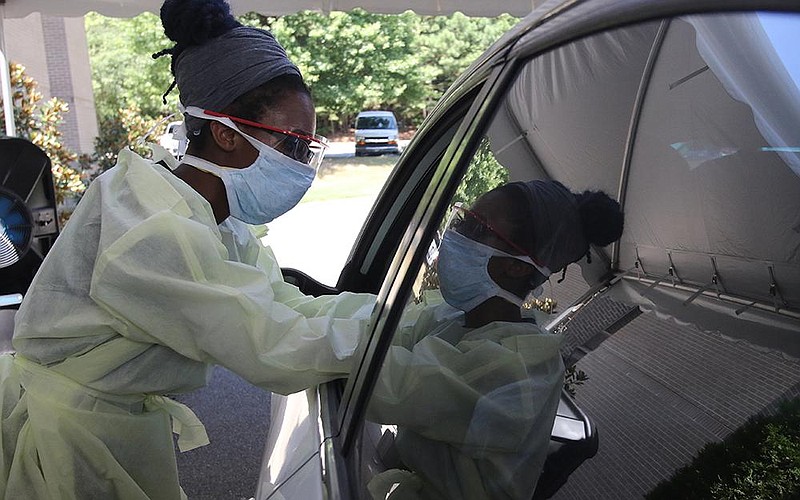 The Arkansas Department of Health reported 44 new covid-19 cases in a 24-hour period Monday -- the lowest number since May 11, when 31 new virus cases were recorded.

The state also reported that the number of active cases dropped by 125 to 1,607.

"Today's report shows another decrease in active cases and low new cases," Gov. Asa Hutchinson said in a statement. "Even though yesterday was Easter, we still saw an increase of over 8,700 vaccine doses administered. We're making progress, and it's important we all do our part by getting vaccinated."

Pharmacists around the state, though, are saying there is a slight decrease in demand for the vaccine -- even after Hutchinson opened vaccine eligibility a week ago to include everyone 16 years old and above.

Previously, eligibility for vaccination had been restricted to people 65 and older, people with health conditions putting them at increased risk of severe infection, residents and workers at long-term care facilities, health care workers, people in certain essential jobs and other high-priority groups.

"It used to be where we'd post our schedule on Monday or Tuesday night and it would be filled up by the next morning," said Eric Crumbaugh, director of clinical business development for Little Rock pharmacy chain Express Rx. "Now, not all of our appointments are filling up."

For Crumbaugh, though, the slower pace of vaccinations means that the supply is finally meeting the demand.

"Early on, we were having to use every bit of technology and everything we could to meet demand," he said. "We're pleased with how it's going."

The total number of vaccine doses received in the state, including through federal programs, rose Monday by 4,770 to 1,823,880.

"For anybody who has held off or waited until the most vulnerable have been vaccinated, now is the time to go ahead and get your appointment made," Crumbaugh said. "Let's go ahead and put this pandemic behind us."

State Epidemiologist Jennifer Dillaha said Monday that while she thinks the state's vaccination effort is going "pretty well," she'd like to see higher numbers -- particularly with those who are fully vaccinated.

The state saw a little increase in demand for the vaccine when everyone 16 years old and above became eligible, she said.

"I think we may have hit kind of a steady plateau right now. Time will tell, but I think that we have been able to steadily provide vaccines," Dillaha said. "We do better during the week than the weekends. We do have some weekend events. I've been happy about the numbers being vaccinated since the increase in the eligibility."

The Health Department is now preparing general practitioner and pediatric clinics to provide the vaccine shots to those under 18, Dillaha said. In the future, the eligibility for the Pfizer vaccine will open up to those as young as 12, she added.

Gwendolyn Herzig, pharmacist and owner of Park West Pharmacy in Little Rock, said the younger generation -- those who waited patiently for their turn to get the vaccine -- are celebratory when they get the shot.

"Everyone is getting their selfies and videos in," Herzig said. "They're ready to get back to normal."

Crumbaugh said the Express Rx locations in the state have seen an increase in the past week in teens and young adults getting vaccinated.

"Last week, we had several clinics scheduled late in the week," he said. "After the governor's announcement, we definitely saw the response."

Herzig said the pharmacy has been working with the general population, but has done outreach and held special clinics for the LGBTQ+ community as well as the Black community.

"This allows us to make sure the underserved communities are taken care of," Herzig said, adding that the pharmacy holds a drive-thru vaccine clinic from 9 a.m. to 1 p.m. and offers off-site clinics for groups of 20 or more.

Park West Pharmacy has been offering vaccines from the beginning, Herzig said.

"It's starting to feel more like flu season, where we, as professionals, are having to advertise the benefits of the vaccines and start educating more to those who have been holding off because they are weary of it," Herzig said. "Beforehand it was considered the holy grail. I feel like more will get it now that it's more convenient."

Dillaha said she strongly encourages people who are resistant to getting the vaccine to get correct information and make an informed decision.

Vaccine providers around the state continue to step out of the pharmacy to find creative ways to get the vaccine to the state's population.

The Central Arkansas Veterans Healthcare System announced Monday that under a federal law covid-19 vaccinations are available to all veterans, caregivers, spouses and beneficiaries of the VA's Civilian Health and Medical Program.

The vaccine clinic at John L. McClellan Memorial Veterans Hospital in Little Rock is open from 7:30 a.m. to 3:30 p.m. Monday through Friday.

The vaccine clinic at Eugene J. Towbin VA Medical Center in North Little Rock is open from 7:30 a.m. to 3:30 p.m. Monday through Friday.

Walk-ins are accepted until 2:30 p.m. at both locations.

Vaccine events for the general public include:

• Wednesday: Beebe Drug is hosting a covid-19 vaccine clinic from at Union Valley Baptist Church in Beebe beginning at 6 p.m. Call (501) 882-5402 to make an appointment.

• April 17: Express Rx is holding a vaccine clinic from 9 a.m. to 1 p.m. at Pavilion in the Park shopping center in Little Rock. The Johnson and Johnson vaccine will be available. Call (501) 227-0587 or visit https://expressrxvaccinationappointments.as.me/PavilioninthePark to register.

• May 16: A drive-thru vaccination clinic will be held from noon to 4 p.m. at Greater Christ Temple in Little Rock. The Johnson & Johnson vaccine will be administered by Park West Pharmacy. Call (501) 224-3499 to sign up.

A vaccine clinic originally scheduled for Thursday at New Saint Paul Missionary Baptist Church in Blytheville has been canceled, UAMS announced Monday. A new date and time will be announced in the near future, according to a statement.

The total hospitalizations from covid-19 remained at 145, and those requiring ventilators fell by one to 23.

There were 1,337 polymerase chain reaction, or PCR, tests as well as 78 antigen tests reported Monday.

Pulaski County had the highest number of new cases at seven followed by Lonoke and Mississippi counties at six each.

The state's cumulative count of cases rose to 331,098 since the pandemic began.

The number of people who have ever been hospitalized in the state with covid-19 grew to 15,421.

The number of state virus patients who have ever been on a ventilator rose to 1,591.