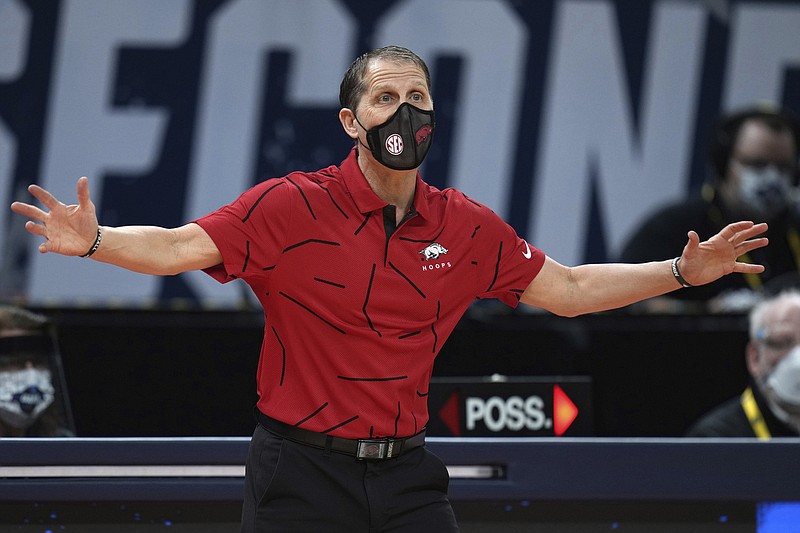 Arkansas head coach Eric Musselman reacts to a play during a first round men's college basketball game against Colgate in the NCAA Tournament, Friday, March 19, 2021, at Bankers Life Fieldhouse in Indianapolis. (Jack Dempsey/Pool Photo via AP)

FAYETTEVILLE — Arkansas’ men’s basketball team finished comfortably inside the top 10 of the final coaches poll of the season Tuesday.

The Razorbacks, who had a 25-7 record and advanced to the Elite Eight, were ranked No. 6 in the USA Today Coaches Poll. It is the first time since 2015 Arkansas has ended the season ranked.

It is the first time the Razorbacks finished in the top 10 since they were ranked No. 2 to end the 1994-95 season, following a loss to UCLA in the national championship game.

The Razorbacks, a No. 3 seed in the NCAA Tournament, defeated Colgate, Texas Tech and Oral Roberts to advance to their first Elite Eight since 1995. Arkansas was eliminated with an 81-72 loss to Baylor, which won the national championship Monday by defeating Gonzaga 86-70.

The Associated Press will not release a postseason poll. The Razorbacks were ranked No. 10 in the final AP poll of the season on March 15, prior to the start of the SEC Tournament.