PREP BASEBALL: Wells flirts with another no-hitter as Mounties win 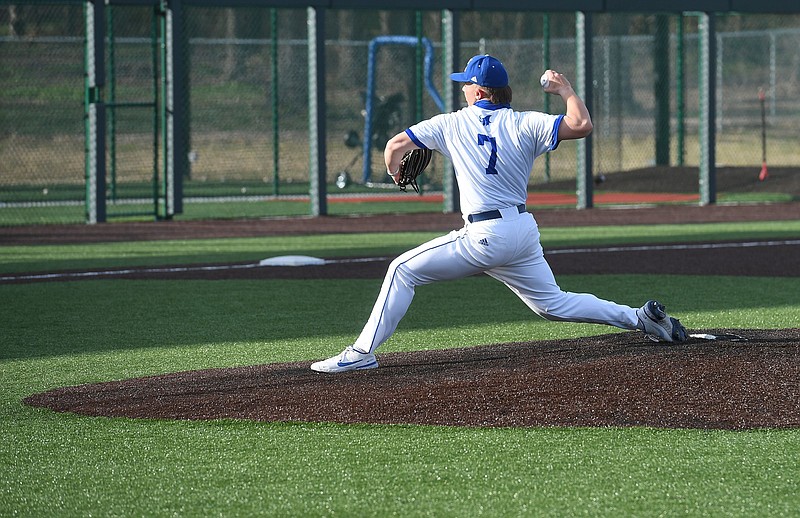 The only difference between the Rogers High right-hander's performance Monday afternoon and his previous outing was he had a victory to show for it.

Wells held Bentonville West hitless until two out in the sixth inning and finished with his second consecutive one-hitter as Rogers posted a 6-1 win over the Wolverines in its new stadium.

"Jackson battled," Rogers coach Matt Melson said. "I can't say enough about him. He was good. It's hard to replicate something like that, but he came out and had his day.

"He goes out there and attacks hitters and gets ahead. The pitch count got away from him a little bit because they were bleeding some counts there, and he has more walks than he normally does. He's a competitor, and when you compete good things happen."

The Mounties (14-3, 6-1) made things a little easier on Wells by providing him with some runs despite getting only four hits. Rogers took advantage of four West pitchers issuing five walks and hitting four batters, with five of its runs scored by players who received the free passes.

Wells, who didn't give up a hit until the seventh inning last week against Fayetteville, finished with a 108-pitch performance, with 69 of them being strikes. He struck out nine and walked four as well as hit a batter.

"It was great to have my teammate produce in big spots," Wells said. "The energy felt a lot better than it did last week, and we made it a point to have better energy. That really helped us.

"I was throwing a lot of cutters and fastballs before, but we eliminated the cutters this time. I was just throwing fastballs, and that was working better."

Rogers took advantage of a West error to score a run in the third inning, but the Mounties' big play came in the fourth after Finley Bunch was hit by a pitch and Noah Goodshield singled. The Mounties called on J.T. Melson, a left-handed hitter, to drop a bunt toward third.

The young Melson dropped a perfect throw, then a wild throw to third allowed both runners to score and make it a 3-0 game. Rogers then completed its scoring an inning later when Eli Marcotte blasted a bases-clearing triple into the left-field corner.

"We were a little more opportunistic," Matt Melson said. "Probably the play of the game was laying that bunt down there and force them into a little action there. Then they threw the ball away and gave us some breathing room, then Marcotte had that big hit.

"We got hit by some pitches and drew some walks and worked some counts. We were a lot better than we were last week with people in scoring position."