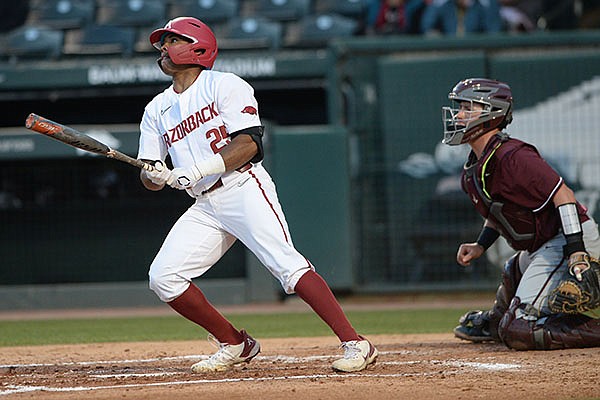 Three Arkansas pitchers combined to throw 4 1/3 innings of scoreless relief as the No. 2 Razorbacks defeated Arkansas-Little Rock 7-2. The teams are scheduled to play the final game of their two-game series Wednesday at 4 p.m.

Ryan Costeiu pitched 1 1/3 innings, Caden Monke pitched two innings and Zack Morris pitched a scoreless ninth to hold down an Arkansas lead that was in danger when the Trojans scored two runs and brought the tying run to the plate in the top of the fifth.

Costeiu struck out Noah Dickerson to strand John Michael Russ at second base to end the inning and preserve a 4-2 lead for the Razorbacks. UALR stranded nine base runners, including seven in scoring position.

Arkansas (23-4) led nearly from wire to wire. Cayden Wallace's two-out home run in the bottom of the first inning broke a scoreless tie, and the Razorbacks added two more runs in the second inning on a Jalen Battles RBI single and Robert Moore sacrifice fly.

Christian Franklin hit an RBI double in the third inning to extend Arkansas' lead to 4-0. It was the second double of the game for Franklin, who finished 2 for 4 and scored a run two days after recording the game-winning hit to take a series from Auburn.

The strong bullpen work came on the heels of that Auburn series in which the Razorbacks' relief pitchers allowed three runs in 13 2/3 innings.

Kole Ramage took a no-decision Tuesday with a 4 2/3-inning start. It appeared Ramage was cruising until he hit Jorden Hussein with a two-out pitch in the fifth inning. Until that point, Ramage had retired seven consecutive batters.

Tyler Williams' two-out single brought Russ to the plate. Russ' opposite-field double to right field cut the lead to 4-2 and sent Arkansas to the bullpen.

Moore doubled to lead off the seventh, advanced to third on an error and scored on a wild pitch by UALR reliever Jacob Weatherly to give Arkansas a 5-2 lead. The Razorbacks added two runs in the eighth on an RBI single from Jacob Nesbit and a fielder's choice RBI from Moore.

The Trojans (12-12) put two runners on with one out against Morris in the ninth, but Hussein hit into the second UALR double play to end the game.

Arkansas won for the 11th time in 12 games. The Trojans lost their fourth straight game following a weekend sweep at Arkansas State.

CORRECTION: A previous version of this story incorrectly listed the number of runs Arkansas' bullpen allowed during the Auburn series.

Jorden Hussein hit into a 6-4-3 double play to end the game. The Trojans put two on against Zack Morris in the inning on a leadoff single and a one-out walk.

UALR's stranded runner in the ninth was its ninth of the game.

Morris teamed with Caden Monke and Ryan Costeiu to throw 4 1/3 innings of scoreless relief. Costeiu is the winning pitcher. Kole Ramage took a no-decision with a 4 2/3-inning start, finishing one out shy of earning the win.

We'll have more soon at WholeHogSports.com.

Casey Opitz walked to lead off the bottom of the eighth, advanced to second on a sacrifice bunt by Zack Gregory and scored on Jacob Nesbit's one-out RBI single.

Jalen Battles scored later in the inning on an RBI ground out by Robert Moore. Battles reached in the at-bat before Nesbit when he was hit by a pitch.

Matt Goodheart grounded out to end the inning. Zack Morris will pitch for the Razorbacks in the ninth. He will face UALR's 8, 9 and 1 hitters.

Caden Monke struck out Kobe Barnum on a 2-2 curveball to end the top of the eighth. UALR stranded a base runner at second base. Kenny Rodriguez reached on catcher's interference by Casey Opitz and advanced to second base on a wild pitch by Monke.

The Trojans have stranded eight tonight.

Robert Moore doubled with one out, advanced to third base on an error and scored on a wild pitch by UALR's Jacob Weatherly.

The Trojans intentionally walked a couple of Arkansas batters in the inning, presumably to set up a double play. Matt Goodheart and Cayden Wallace advanced to second and third base on a ground out by Brady Slavens, but they were both stranded in scoring position when Christian Franklin struck out.

The Razorbacks have stranded six tonight. UALR has stranded seven.

Caden Monke pitched a scoreless seventh for Arkansas. He worked around a leadoff walk to Eldrige Figueroa, but stranded a couple of ground outs around a strikeout of UALR's best hitter, Jorden Hussein.

The Trojans have stranded seven base runners.

Arkansas' bats have gone cold since the early innings. The Razorbacks went down in order again in the sixth on ground outs by Casey Opitz and Zack Gregory, and a fly out by Jalen Battles.

Caden Monke will pitch the seventh for the Razorbacks.

The game is moving along quickly. After Arkansas went down in order in the bottom of the fifth, the Razorbacks erased a one-out base runner with a 6-4-3 double play to end the top of the sixth.

Both teams have six hits, but the key right now is that UALR has stranded two more base runners than Arkansas.

The Trojans stranded their sixth runner of the game when Ryan Costeiu struck out Noah Dickerson to end the top of the fifth inning.

Ramage — who was once nicknamed "The Vulture" because he earned the win in short outings — won't be able to get the win tonight because he was taken out after 4 2/3 innings, one out shy of qualifying for the win. Costeiu is in line for the win now.

Kole Ramage was cruising until he hit Jorden Hussein with a two-out pitch. Tyler Williams followed with a single, and both players scored on an opposite-field double by John Michael Russ.

Ramage's night is finished. Ryan Costeiu is coming out of the bullpen, attempting to get the Razorbacks out of the jam.

Jacob Nesbit walked with one out and Robert Moore followed with an infield single, but the fourth inning ended when Matt Goodheart grounded into a double play.

Kole Ramage will pitch again for the Razorbacks in the fifth.

Kole Ramage worked a 1-2-3 fourth inning after allowing at least one base runner in the first three innings.

Ramage got a couple of fly outs in the inning and struck out Kobe Barnum for the second out. He has six strikeouts tonight.

His pitch count is at 67. It'll be interesting to see if he comes out for another inning.

Brady Slavens singled with one out and scored on Christian Franklin's RBI double to the wall in left-center field. Franklin has two doubles tonight.

UALR stranded two more in the third inning, bringing its total to five left on base tonight.

Nathan Lyons walked to lead off the inning and Tyler Williams reached on a fielder's choice. Lyons advanced to second base on a throwing error by shortstop Jalen Battles.

The inning ended when Noah Dickerson grounded out to second baseman Robert Moore. Moore had some trouble coming up with the ball, but still got it to first base in plenty of time to record the out.

Kole Ramage struck out another UALR batter to bring his strikeout total to five.

The Razorbacks have scored a couple of runs in the second inning. Christian Franklin led off with a double and scored on Jalen Battles' one-out RBI single.

Arkansas loaded the bases with three straight one-out base runners. Zack Gregory walked, Battles singled and Jacob Nesbit was hit by a pitch. Gregory scored on a sacrifice fly from Robert Moore.

Kobe Barnum doubled with one out, but he was stranded at third base to end the top of the second inning. UALR has stranded three today.

Kole Ramage is throwing a lot of pitches — 38 through two innings. He has four strikeouts.

Cayden Wallace's two-out solo home run has given Arkansas the lead. Wallace smoked the ball, but it only went into the left-field bullpen because of how hard the wind is blowing.

Wallace extended his hitting streak to 11 games. That was his seventh homer of the season.

Kole Ramage gave up a leadoff single and a one-out single, but he struck out three UALR batters to get out of the inning without allowing a run.

It is a warm, humid night for the first of two midweek games between these teams. There are thunderstorms expected overnight or tomorrow morning, but it should be fine for tonight's game.

The wind will be worth watching. It is expected to gust to around 30 mph out of the south tonight, which will affect balls hit to right field. It could blow some balls out that are hit to left, but overall it's likely just to knock a lot of fly balls down.

Arkansas will throw right hander Kole Ramage tonight. Ramage had a rough start to the season, but had probably his best outing of the season last week against Central Arkansas when he pitched four innings and allowed three runs. He pitched against UALR two years ago in the last meeting between these teams and gave up the grand slam that helped the Trojans pull away in the late innings.

UALR is going to throw left hander Sawyer Smallwood, a junior from Texarkana. Smallwood has allowed 2 earned runs on 6 hits in 6 innings. He has struggled a little bit with command and has more walks than strikeouts.

Arkansas will start most of its everyday starters tonight. Zack Gregory will get the start in left field and Jacob Nesbit will start at third.