Hogs get first look at Trojans since beating 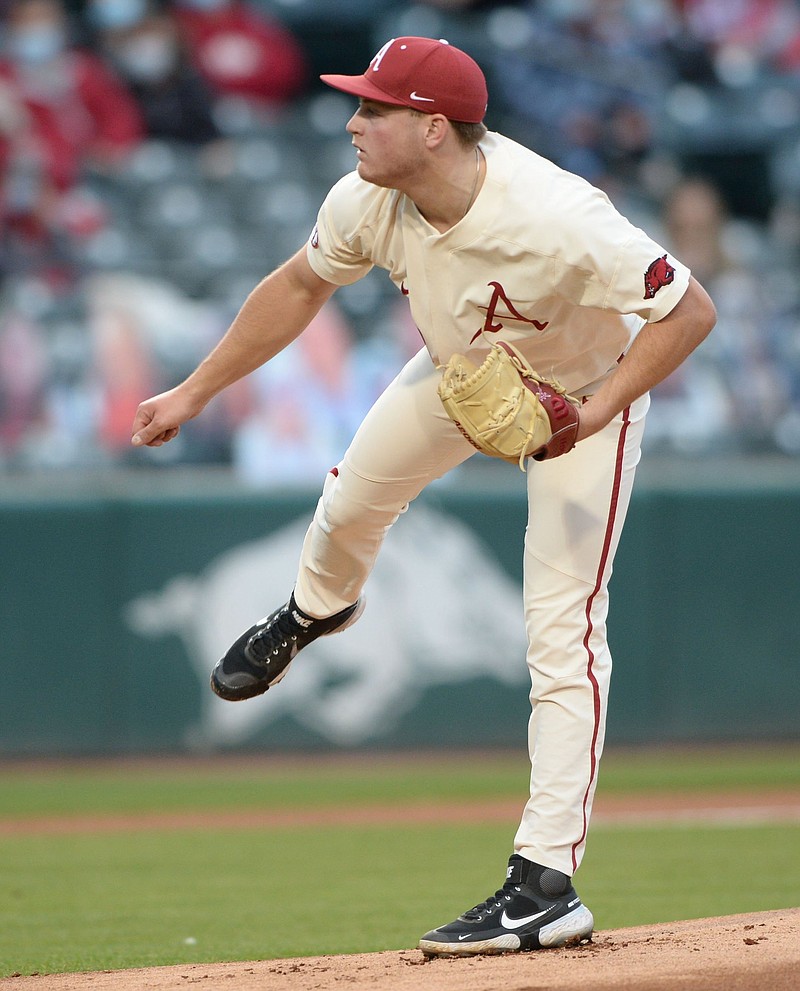 After last season's matchup was canceled because of the coronavirus pandemic, the No. 2 Razorbacks (22-4) and Trojans (12-11) will meet again at 6:30 tonight at Baum Walker-Stadium.

"It was a big game for the state -- it was a big historic moment -- and that team handled it well," UALR Coach Chris Curry said of his 2019 Trojans. "That's what I'm looking for this team to do, is handle a game against the [No. 2] team in the country, who also happens to be an in-state team."

Arkansas Coach Dave Van Horn said he won't talk to the Razorbacks about the 10-run loss to UALR.

"I won't say a word about it, haven't said a word about it," Van Horn said. "It's a game that, honestly, when you look back at it, you dissect the game, we didn't do much when we had opportunities the first five or six innings."

The Razorbacks stranded 11 runners the first six innings and left the bases loaded in the fifth and sixth.

The Trojans added nine runs in the final three innings, and senior Ethan Dailey pitched five innings of relief and held Arkansas to one run. The Razorbacks also committed four errors that led to six unearned runs for UALR.

Arkansas position players in the game still on the team are catcher Casey Opitz, center fielder Christian Franklin, DH Matt Goodheart and third baseman Jacob Nesbit. Curry said no Trojans will play tonight who were part of their victory.

"Sometimes you just have to tip your cap to the other team," said Van Horn, who led the Razorbacks to the 2019 College World Series. "They just come in there and they beat you and that's what they did.

"It's not a rivalry at all to me. It's a really good matchup with an in-state team. I think it's really good for the state."

Curry, an Arkansas volunteer assistant coach in 2009 and 2010, credited Van Horn for pushing the UA administration to end a long-standing policy of not scheduling in-state teams.

"The respect is as high as it can be," Curry said of his feelings about Van Horn. "You're talking about a Hall of Famer. He's done everything as a coach that you aspire to do.

"I'm thankful to him for my first Division I opportunity. I'm thankful the way that he treated my family. My son was born there and he gave me three or four days to be with my family, that I didn't ask for, but he basically told me to take.

"I'm appreciative for how much he's an ambassador for baseball in the state. He's the one that pushed to open it up, to play everybody."

Van Horn, in his 19th season at Arkansas, said Hunter Yurachek -- hired as the Razorbacks' athletic director in December 2017 -- was receptive to his desire to schedule in-state teams.

"I've been saying it for 10 years, but nobody would listen," Van Horn said. "Then when Hunter got here, I think he started saying, 'You know, maybe it would be [a good idea].'

"Some of the guys on the board [of trustees] at the time thought this would be good, it would be good for the state. They made a change, and I think it was a good change."

"We're going to get beat, we're going to lose some games, it's just the way it is," Van Horn said. "It's baseball, it's the middle of the week, but I'm glad we're playing them."

"I have a lot of respect for Coach Curry and R.D. Spiehs," Van Horn said. "Those guys are competitors and they don't like to lose."

Earlier this season UALR won 1 of 3 games at Auburn, split two games at Oral Roberts,and won 2 of 3 at Southern Illinois when the Salukis were nationally ranked. But the Trojans were swept in a three-game series at Arkansas State last weekend.

"It's important for us to get back on the right track on the field," Curry said. "I think our players are as frustrated as anybody about the outcome, but what we've got to do is refocus, reset and take a deep look into why we didn't play well and what we can do to get better."

Curry said his message to the Trojans this week is to focus on themselves rather than the team they're playing.

That doesn't figure to be so easy when Arkansas is the opponent.

"The key that we have to give them is a plan going forward on how to perform well and handle that moment," Curry said. "How to breathe, how to slow down and focus on what they're supposed to do in that particular at-bat or in that inning on the mound."

NO. 2 ARKANSAS BASEBALL VS. UALR