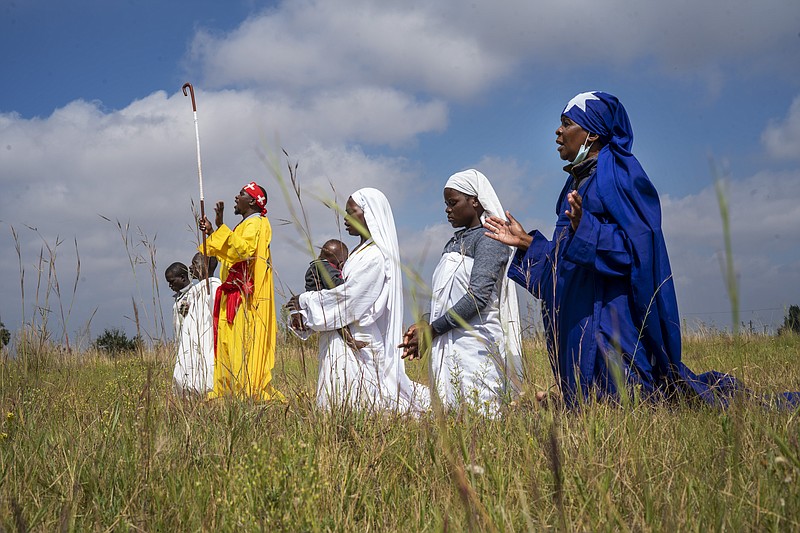 VATICAN CITY -- Easter Sunday was celebrated worldwide with the faithful spaced apart in pews and singing choruses of "Hallelujah" through face coverings on a second Easter Sunday marked by pandemic precautions.

At St. Peter's Basilica, the 200 or so faithful allowed to attend looked lost in the cavernous cathedral. Normally, thousands would be at the Mass celebrated by Pope Francis, and more than 100,000 would sometimes assemble outside in St. Peter's Square to receive his Easter blessing afterward.

But this year, as in 2020, crowds are banned from gathering in Italy and at the Vatican. Francis delivered his noon Easter address on world affairs from inside the basilica, using the occasion to appeal anew that vaccines reach the poorest countries.

The pontiff sounded weary as he noted that pandemic measures have affected religious holiday traditions and kept some faithful from public worship.

[Video not showing up above? Click here to watch » https://www.youtube.com/watch?v=c-Wrop_hVB8]

"We pray that these restrictions, as well as all restrictions on freedom of worship and religion worldwide, may be lifted and everyone be allowed to pray and praise God freely," Francis said.

He denounced how armed conflicts continue to rage even as the coronavirus pandemic has triggered severe social and economic suffering and swollen the ranks of the poor.

"The pandemic is still spreading, while the social and economic crisis remains severe, especially for the poor. Nevertheless -- and this is scandalous -- armed conflicts have not ended, and military arsenals are being strengthened," Francis said, sounding angry. "That is today's scandal."

In Syria, where a national vaccination program has yet to begin, churchgoers in the Lady of Damascus Church prayed for a way out of the economic and political crisis, only worsened by the pandemic.

"We came to the church for Easter so we get rid of the pandemic that we are in," said Bassam Assaf. "Of course, we are not scared of coronavirus. It is the reality that we face, but it cannot stop us from coming and praying to God to take us out of this ordeal and help the world."

The pandemic kept Seville's Brotherhood of the Holy Resurrection from sending its ornate Easter float, bearing a towering statue of Jesus, through the streets of the Spanish city. Instead, the Brotherhood posted videos and old photos from their last procession, two years ago.

In South Korea, Yoido Full Gospel Church, the country's biggest Protestant church, allowed only about 2,000 people to attend Easter service, or about 17% of the capacity of the main building. Masked worshippers sang hymns and prayed as the service was broadcast online and by Christian TV channels.

Hundreds of Catholics gathered in the mammoth Cathedral of St. Paul in St. Paul, Minn., for the Easter Vigil service Saturday evening. Every other pew was kept empty and masks were mandatory. Still, the solemn liturgy marked a new, hopeful beginning for the congregation after a turbulent year.

After virtual Easter services last year, St. Patrick's Cathedral in New York City was at half-capacity for Sunday's Mass. Worshippers spaced themselves out in the vaulted neo-Gothic cathedral, which can seat more than 2,000. The choir sang through masks.

Tonee Carpio said being in St. Vincent de Paul Church in Austin, Texas, meant a lot to her after services last year were offered only online. She said being in church helps keep her Filipino culture alive in her city because some prayers are offered in her native Tagalog.

In Florida, Eastgate Christian Fellowship in Panama City Beach hosted its annual sunrise service on the beach. The church had to scrap the service last year because all beaches were closed. Pastor Janelle Green estimated that about 400 people participated.

Robin Fox of Palm Bay, Fla., planned to spend Sunday driving her mother to Orlando to get a second dose of vaccine at a Federal Emergency Management Agency walk-up site.

"She's getting that freedom on the same day that [people go to] church to celebrate Jesus being risen, so I said [to her], 'it's kind of like you're being risen also,'" Fox said.

Although the endpoint of the pandemic is emerging in a few countries, such as the United States, that have raced ahead with vaccinations, the picture is different in Europe, where the rollout has been dismally slow, and half the continent's nations are in some form of lockdown.

Gallery: Easter celebrations around the world

"There is a psychological sense of tiredness," said Bishop Domenico Pompili, who had to reorganize Masses in his diocese of Reito, Italy, because priests contracted the coronavirus in the days leading up to Easter, "We never could have imagined such a perennial state of uncertainty."

That has made this strange Easter perhaps even harder to stomach than the last one. While the collective sense of fear has diminished, people are contending instead with disillusionment, economic pain and continued isolation. Restrictions aren't nearly as strict as those a year ago -- in part because people know more about what behaviors are riskiest -- but holidays still come with a laundry list of confusing rules.

In Germany, Chancellor Angela Merkel, noting the surge in infections, said Easter this year should be "quiet." In Paris, thousands of officers were deployed to enforce new restrictions, including a ban on movement of more than 6 miles from home.

Intent on tamping down weeks of surging infections, the Italian government ordered people to stay home for the three-day weekend except for essential errands. Premier Mario Draghi's government did allow one visit to family or friends per day in residents' home regions over the weekend.

In some European countries, citizens lined up on Easter for their turn to receive a covid-19 vaccine.

In Italy, those fortunate enough to get a vaccine in Milan on Sunday received an extra reward: an Easter cake in the shape of a dove and packages of pasta. Only one hospital in the city administered vaccines on Easter, according to Italian media.

The French city of Sarcelles, north of Paris, was among those whose vaccination center stayed open Easter Sunday, amid mushrooming infections and demand. The center's organizers planned to inject 2,000 doses Sunday -- twice their daily average.

However, some European cities put vaccinations on hold over during the long holiday weekend.

Medical workers need "a little rest at last," said an official with the French city of Strasbourg, which shut down vaccination facilities from Good Friday through today. To ensure that residents still had access to potentially life-saving vaccines, Strasbourg expanded vaccination hours and administered all of its weekly supply of doses between March 29 and Thursday, the official said.

Spaniards lined up for shots on Easter Sunday in Barcelona and other points around the country, but Madrid halted vaccinations at local health centers to give staff a break. The Spanish capital continued to give shots at a soccer stadium and a new hospital built to help handle pandemic cases.

With Spain fearing yet another surge of infections like the one now overwhelming French intensive care wards, Spanish Health Minister Carolina Darias had urged regional authorities to keep up vaccinations throughout Easter Week.

Information for this article was contributed by Frances D'Emilio, Angela Charlton, Oleg Cetinic, Joseph Wilson, Sylvia Hui and David McHugh of The Associated Press; and Chico Harlan and Stefano Pitrelli of The Washington Post (WPNS). 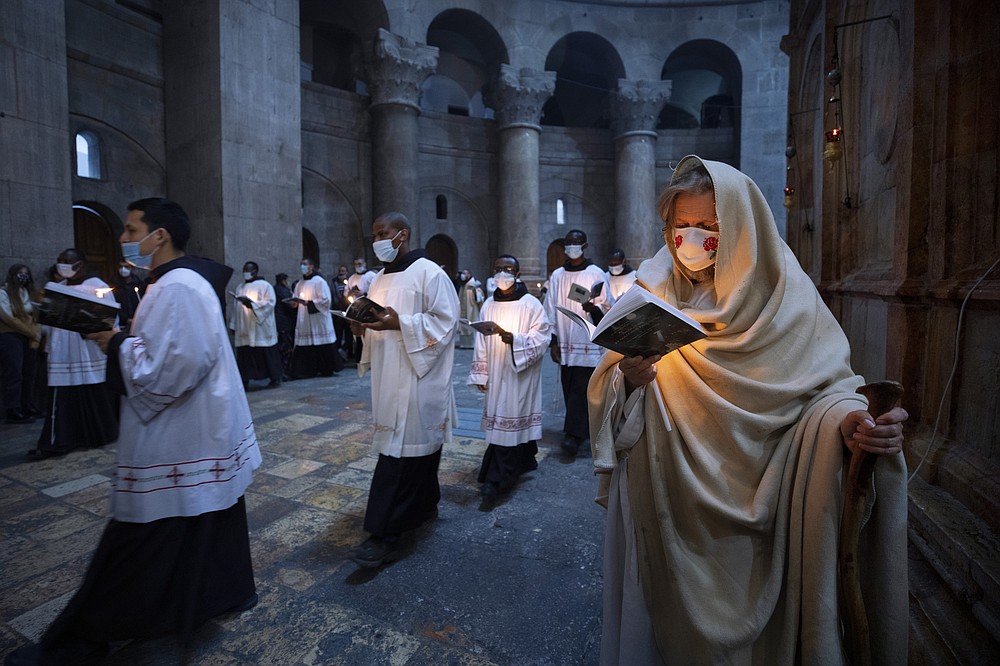 Priests circle the Edicule during Easter Sunday Mass led by the Latin Patriarch at the Church of the Holy Sepulchre, where many Christians believe Jesus was crucified, buried and rose from the dead, in the Old City of Jerusalem, Sunday, April 4, 2021. (AP Photo/Oded Balilty) 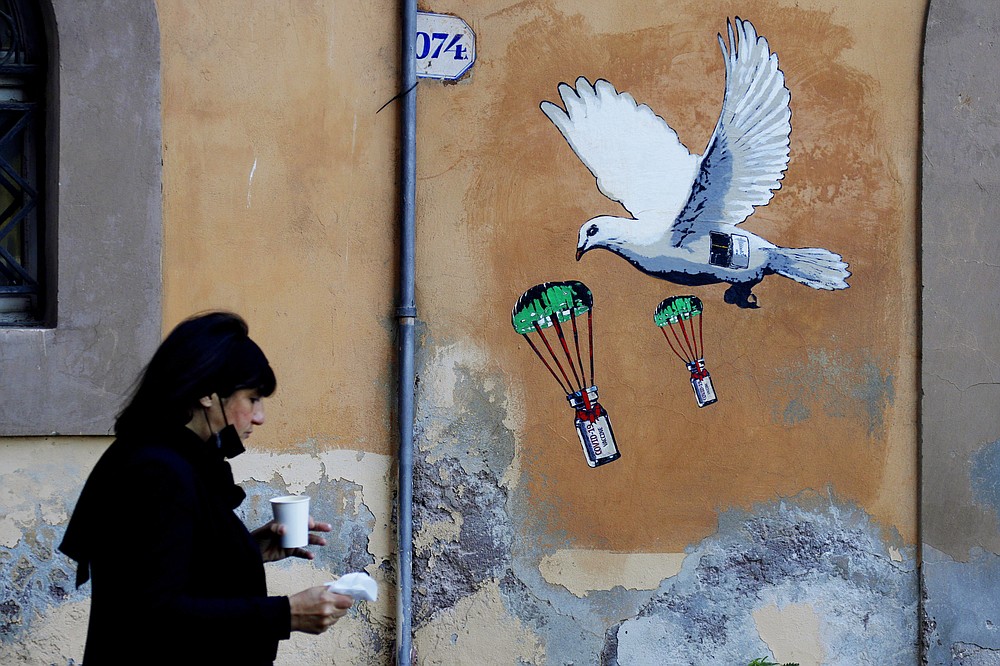 A woman walks past a mural depicting a white dove parachuting COVID-19 vaccine vials, posted near the Italian Health Ministry Headquarters in Rome, Sunday, April 4, 2021. Italy has entered a three-day strict nationwide lockdown to prevent new surges of the coronavirus. Police set up road checks to ensure people were staying close to home and extra patrols were ordered up to break up large gatherings in squares and parks, which over Easter weekend are usually packed with picnic-goers. (AP Photo/Gregorio Borgia) 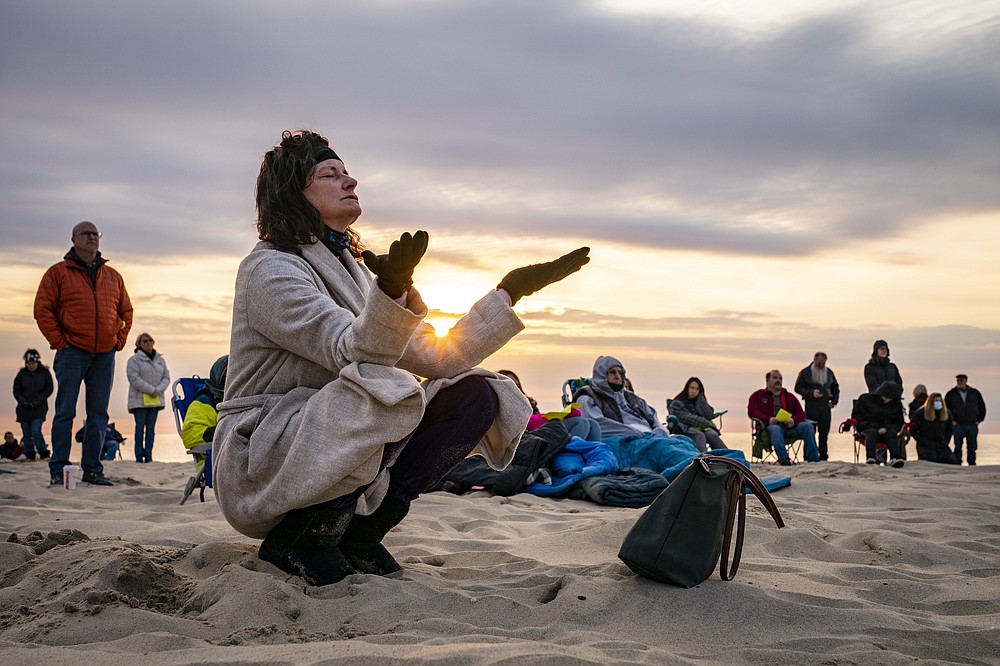 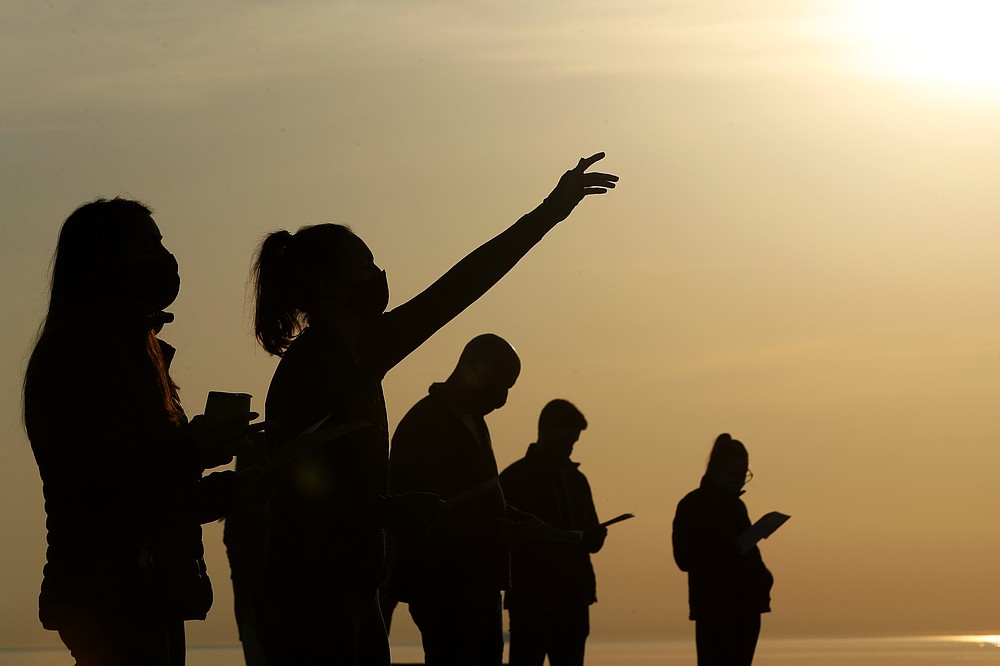 Parishioners are silhouetted against the sky as they gather and pray during an Easter sunrise service held by Park Community Church Sunday, April 4, 2021, at North Avenue Beach in Chicago. (AP Photo/Shafkat Anowar) 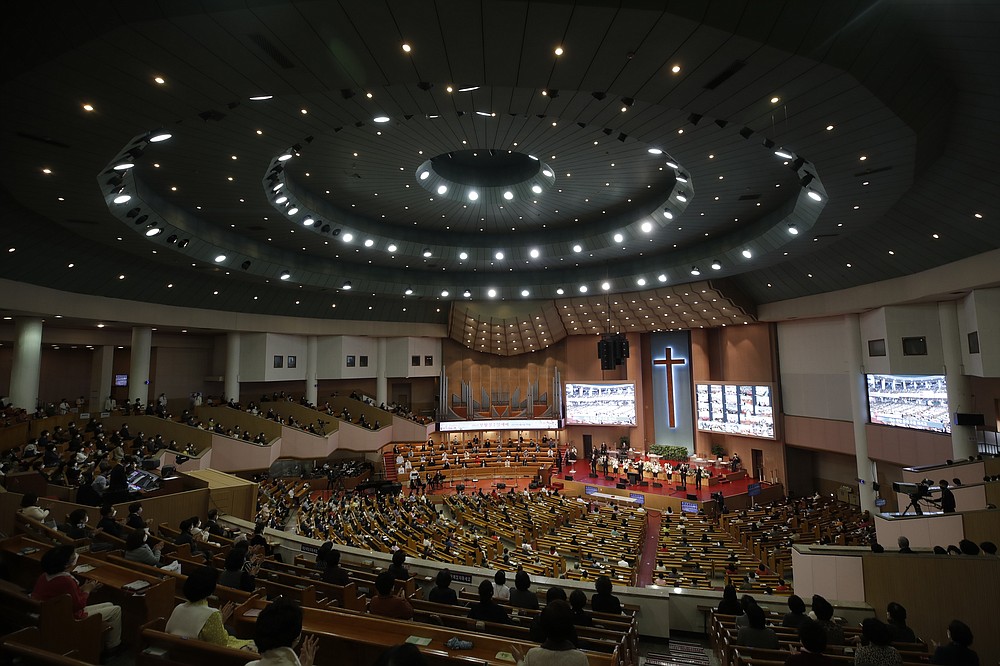 Christians wearing face masks as a precaution against the coronavirus attend while maintaining social distancing during an Easter service at the Yoido Full Gospel Church in Seoul, South Korea, Sunday, April 4, 2021. The church allowed only 20 percent members of the capacity to attend at the Easter service as a part of measure to prevent against the coronavirus. (AP Photo/Lee Jin-man) 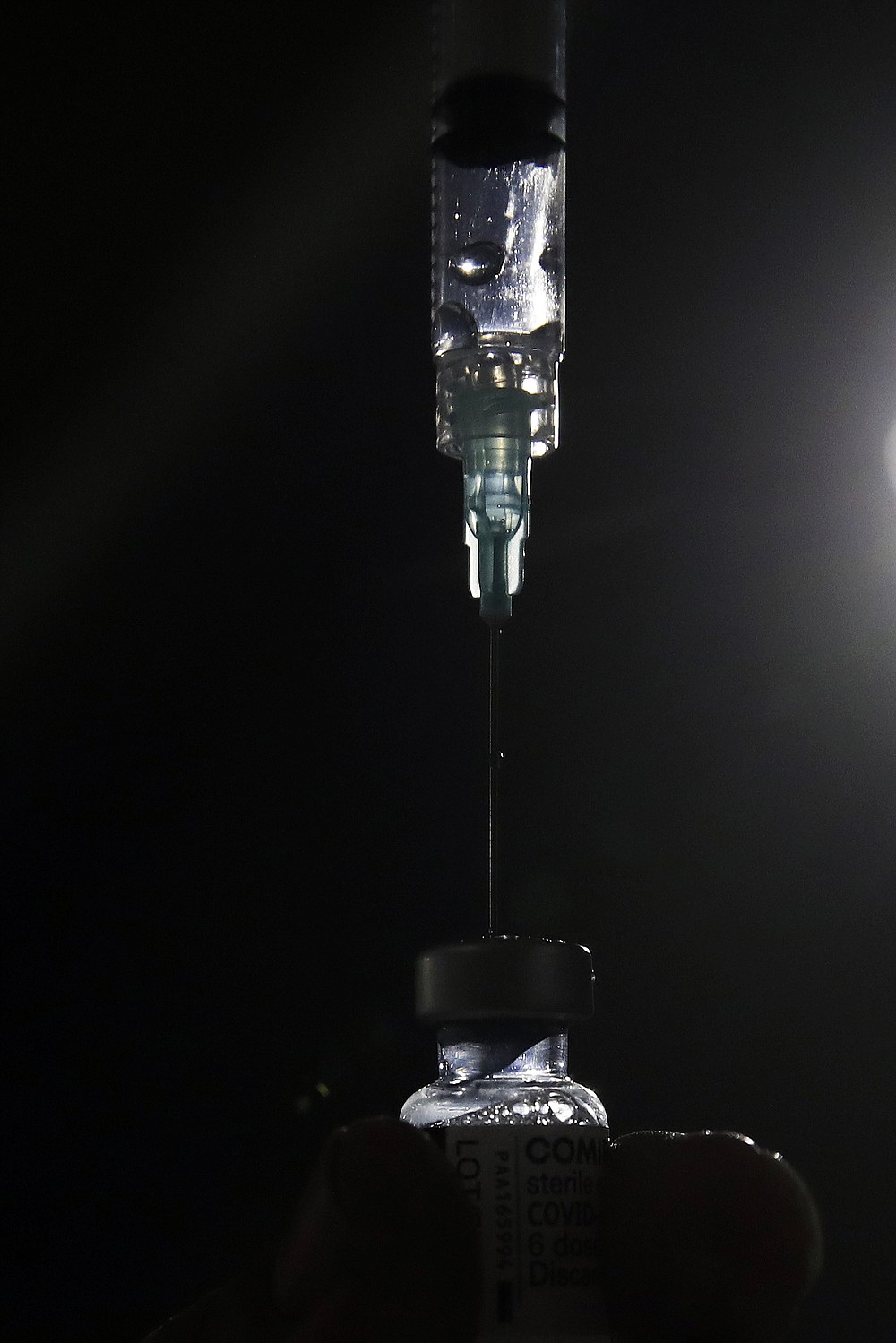 A medical staff prepares Pfizer's COVID-19 vaccine in a vaccination site in Sarcelles, outside Paris, Sunday, April 4, 2021. Some 9,000 people are getting vaccinated at a huge stadium in Lyon during Easter weekend, and thousands more around France are spending the holiday lining up for injections elsewhere as the government tries to speed up vaccinations amid a new virus surge. (AP Photo/Christophe Ena) 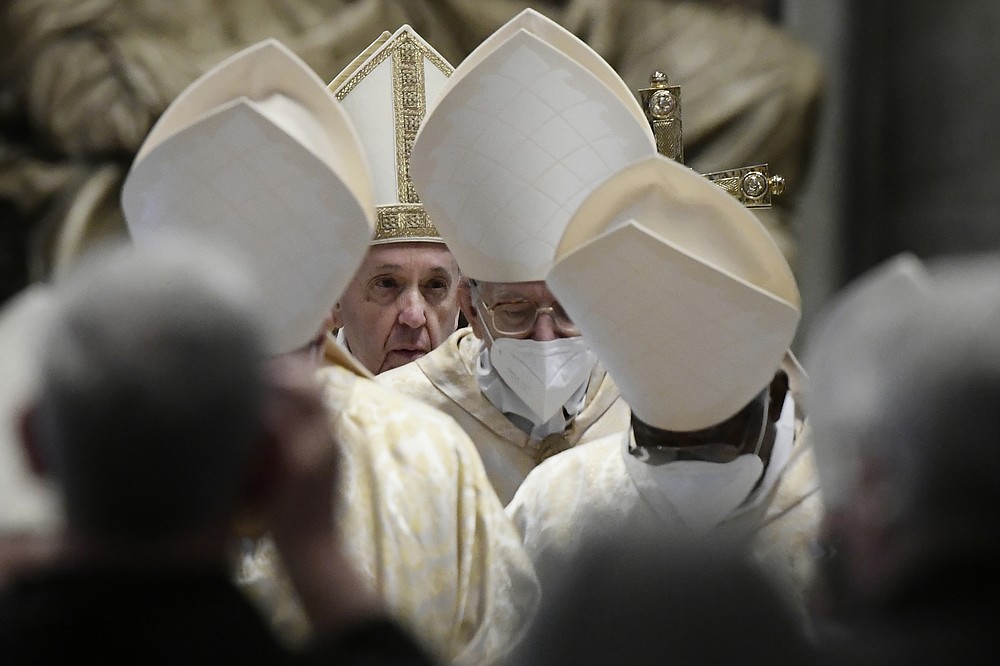 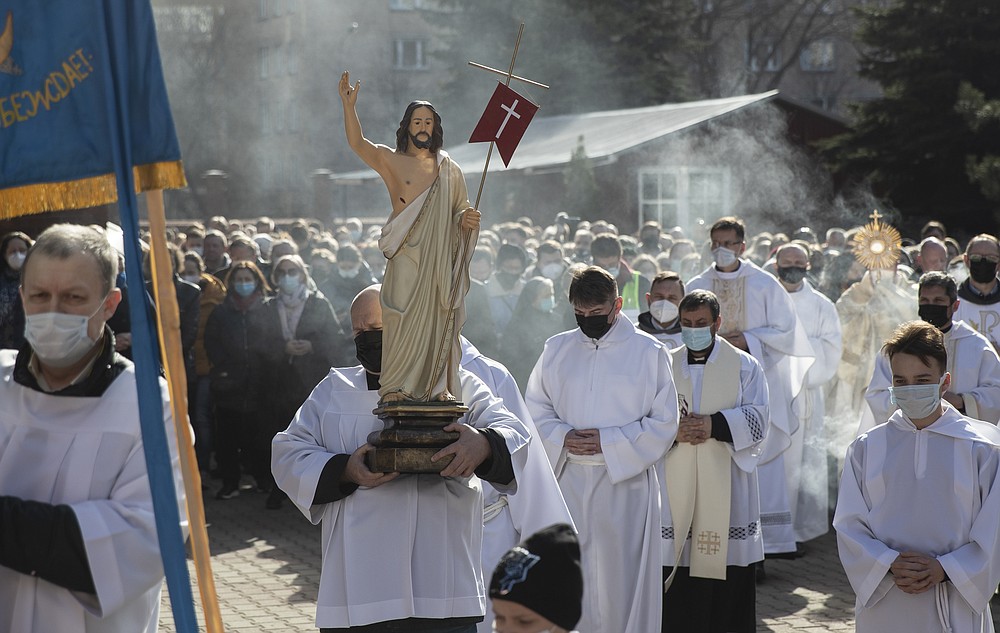 Catholic priest carries a statue of Jesus Christ as he walks in religious procession during the Holy Easter celebration in the Cathedral of the Immaculate Conception in Moscow, Russia, Sunday, April 4, 2021. (AP Photo/Pavel Golovkin) 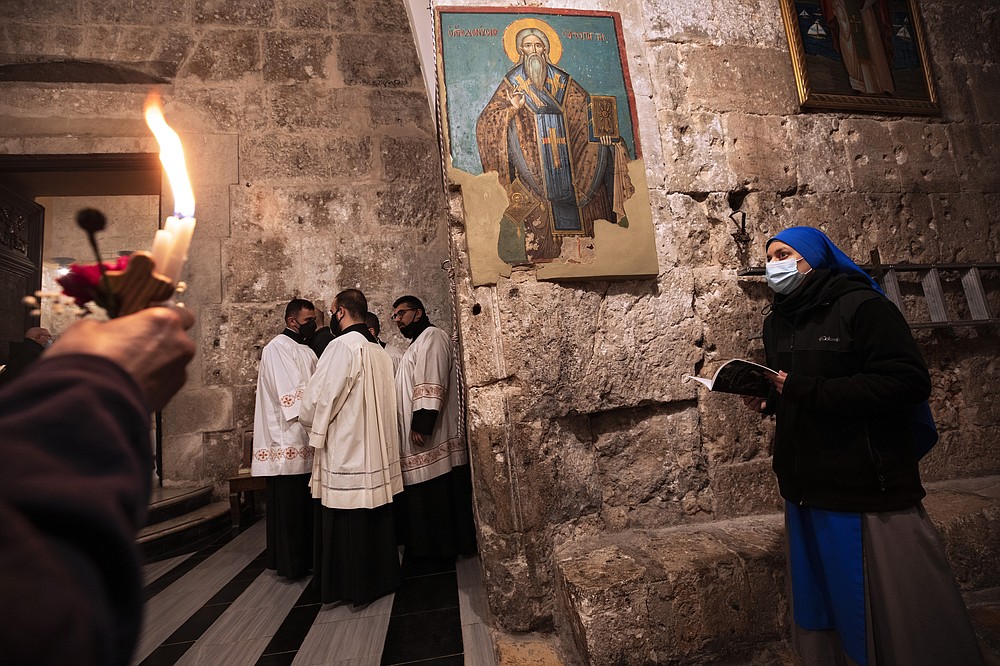 Priests and a nun wearing face masks attend Easter Sunday Mass at the Church of the Holy Sepulchre, where many Christians believe Jesus was crucified, buried and rose from the dead, in the Old City of Jerusalem, Sunday, April 4, 2021. (AP Photo/Oded Balilty)
ADVERTISEMENT