During the February Ice Age, Old News promised a fun story about the Arkansas General Assembly from 100 years ago. Good things come to those who wait: Today we have that item and others, too.

That 43rd General Assembly (Jan. 10 to March 10, 1921) was no more gifted nor defective than any other historical batch of definitely literate Arkansas politicians. The members proposed many potentially fateful changes to state law, most of which died a peaceful death in committee. For instance, there was a bill to dismantle the medical school at the University of Arkansas because it might be cheaper to pay all the expenses future doctors would incur while attending out-of-state med schools.

The Assembly passed a respectable quantity of forgettable bills (browse among them at arkansasonline.com/42old) as well as one standout: Act 179 of 1921. This law required county clerks or chancery court clerks to state the race of participants on marriage licenses and divorce decrees, unless they were "Caucasian or white." There was a $25 fine for failing to state the race of suspiciously nonwhite citizens.

There was also an act that allowed women to refuse to serve on a jury. But mostly, the solons argued over roads and whatnot. A nice bit of "whatnot" occurred during a raucous argument about some aspersions cast upon a state boiler inspector. Somebody stood up and jokingly mimed tossing dice, and then the speaker of the House — facetiously or not, news accounts disagree — ordered the sergeant-at-arms "to stop the crap game while the House was in session." The Arkansas Democrat picked up the story, suggesting the chamber's lousy acoustics were at fault.

The next day, the original jester, concerned about appearances, proposed a resolution to the effect that there had been no game of craps but only a superabundance of "pep." This suggestion proved controversial. Read more about it at arkansasonline.com/45bonus.

The resolution wasn’t accepted, but Act 528 of 1921 did authorize the secretary of state to contract to improve acoustics in both chambers.

But my favorite bit of goofiness out of that long-ago legislative session was a story the Arkansas Gazette published on Valentine's Day 1921. The unnamed reporter asked a question:

What Is an Enrolled Bill?

The answer he got was, and I quote from the headline:

No One Knows the Answer

Ask that question today, and Uncle Internet has your answer at the ready: An enrolled bill, according to the glossary at senate.gov, is "the final copy of a bill or joint resolution which has passed both chambers in identical form." Per the U.S. Senate, an enrolled bill is printed on "parchment paper," signed by appropriate House and Senate officials, and submitted to the president for signature. See also arkansasonline.com/42also. Congress can dispense with the parchment in the final days of a session. In 1982, the 97th U.S. Congress set it aside so bills would reach President Reagan faster.

This is known. But in February 1921, the Gazette reported:

"Why an enrolled bill is enrolled like it is enrolled is a question which Saturday stumped a governor, an attorney general, a member of the Supreme Court, a secretary of state, a former speaker of the House, the secretary of the Senate and the chief clerk of the House and any number of other state officials, who are more or less directly in touch with legislative matters.

"The consensus of opinion, however, was that it just is, and the only reason assigned was 'tradition.'"

An enrolled bill, the Gazette explained, was the final copy of the measure that had passed both houses and would be "filed for record in the office of the secretary of state."

"It is from this copy that the printed acts are made, and the proof of the printed act is carefully checked with it before the bound volumes of the acts are published. The enrolled bill is also carefully checked against the original bill introduced in the legislature before it is sent to the governor for his signature, and then to the secretary of state for filing in the archives."

"All of which is very simple," the Gazette continued, "except that an enrolled bill always is handwritten with pen and ink on one sheet of paper little less than a yard square."

"More sheets are used if the bill is a large one," the Gazette added, "but the size is constant — a large, unwieldy square, which, for convenience in handling, is rolled up like a high school girl's graduation essay."

This becomes even more odd when one knows that the House Journal — the written record of official proceedings — switched to typewriting in 1911, and the Senate Journal followed suit in 1919. The Gazette continued:

"It would be much simpler, all state officials admitted, to type the enrolled bill on paper of conventional size. But it isn't ­done. And why it isn't done no one knows."

The Gazette concluded: "There is no statute prescribing the oversize paper for enrolled bills, but in the ancient days of law-making before there were typewriters or any considerable facility for printing the acts, the enrolled bills were always transcribed upon squares of parchment. These were bound and became the imperishable — until repealed — laws of the land. The custom came over from England, was adopted by the United States Congress and by the legislature of Arkansas, and has stuck around ever since."

At the Arkansas State Archives in March 2021, director and state historian David Ware and his colleagues found evidence the tradition continued into the 1950s.

Ware looked among the heavy-duty steel shelving units (with a baked enamel finish) in the archive storage areas and found books, books, books of what appear to be handwritten bills that became acts.

He says the secretary of state's office preserves typed, filed copies of acts and unapproved bills and resolutions — file cabinet after file cabinet — in a vault in the basement of the Capitol. But the volumes the archives hold appear to be bills that became acts, and into the 1950s they were handwritten on thick, smooth paper.

Ware says, "There is some variation, but the bound volumes measure about 23 or 24 inches tall by 18 inches wide. If opened, the books are close to 36 inches wide."

They are in such good condition, they illustrate for him the durability of the written record. Ware talks about "the Four K's of paper conservation": Keep it dry, Keep it cool, Keep it dark and Keep your hands off of it.

"Follow the Four K's," he says, "and a document written or printed on good quality, acid-free paper can last for centuries.'' 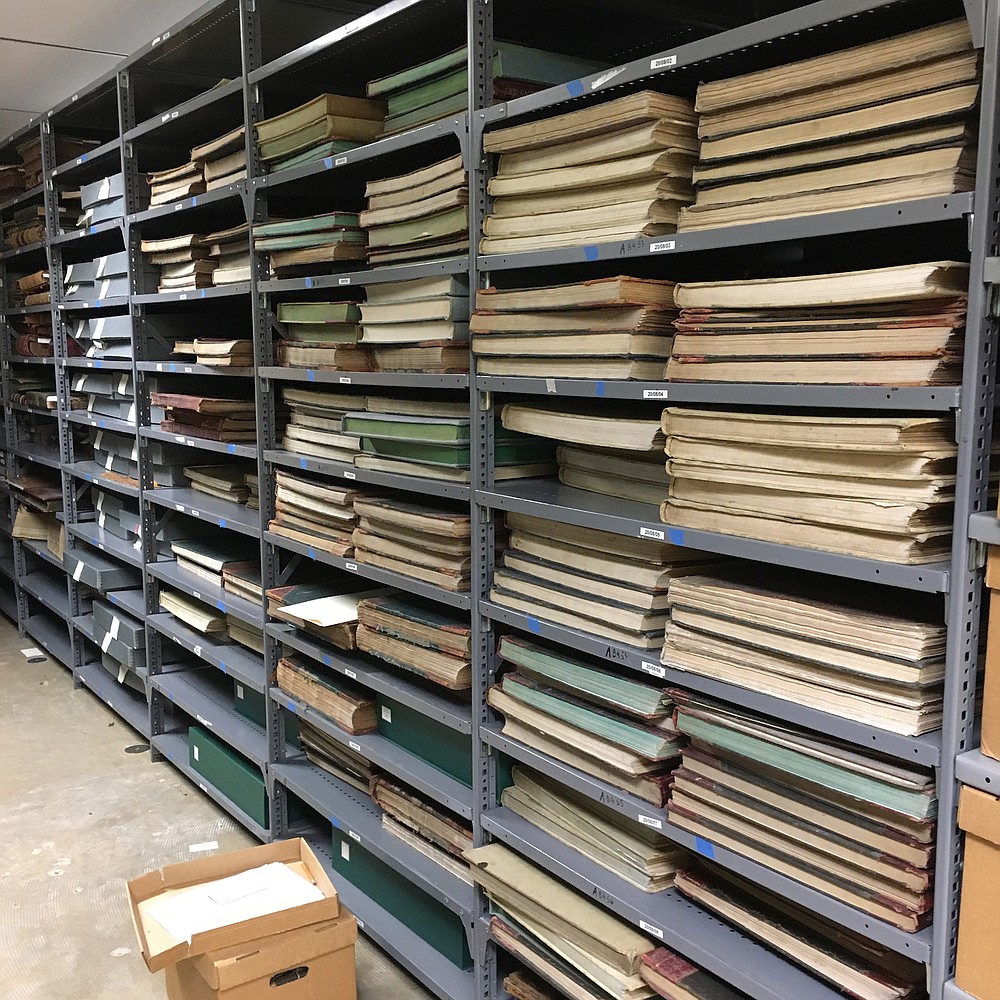 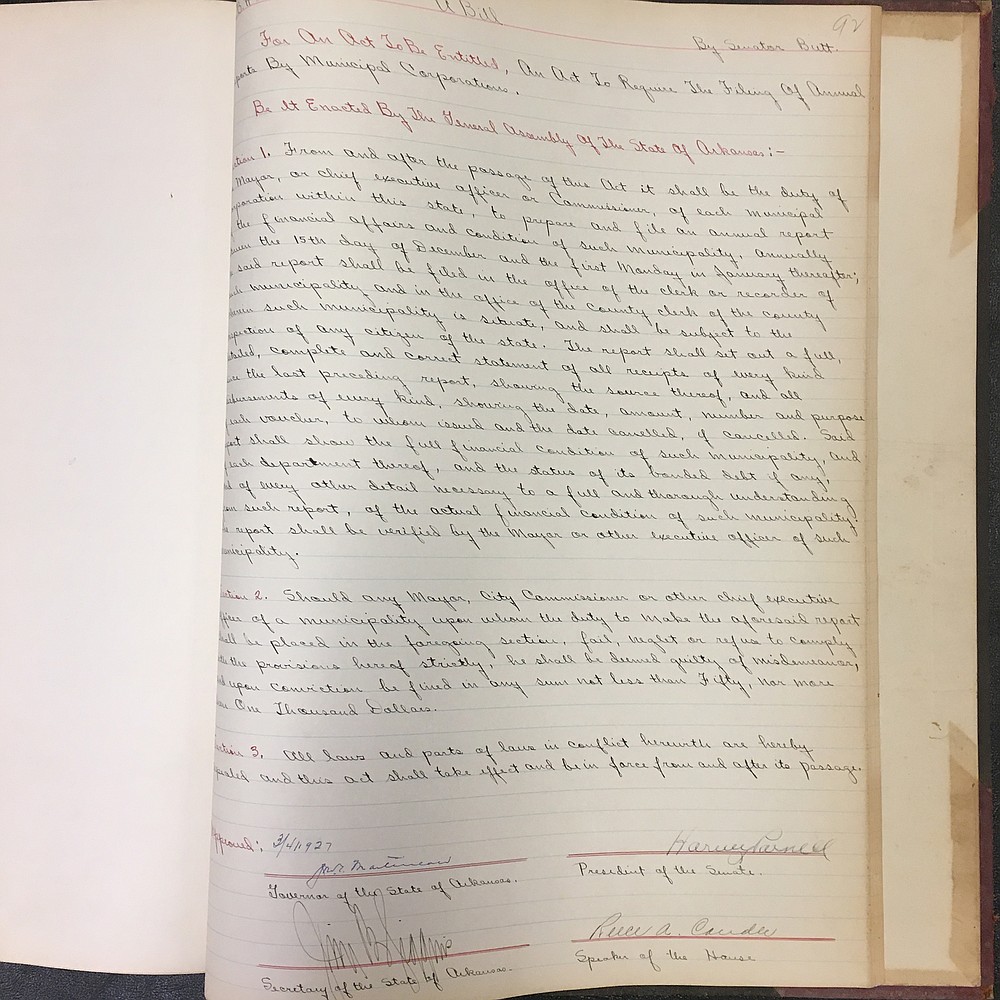 A volume from 1927 includes this bill introduced by Sen. Festus Orestes Butt. Convicted in a bribery scandal in 1906, Butt served part of his sentence, paid a fine and went home to Eureka Springs; he was re-elected to the Senate in 1927 and '29. (Arkansas State Archives/David Ware) 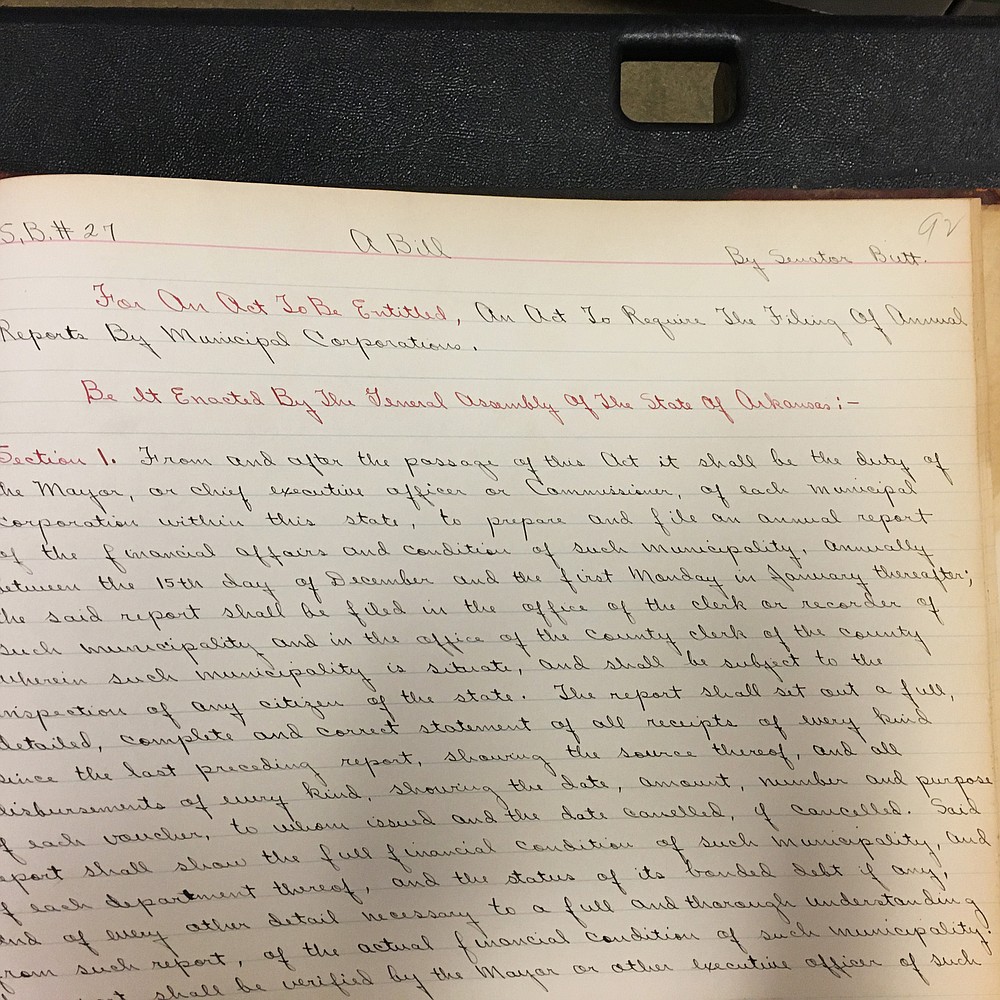 A volume from 1927 includes this bill introduced by Sen. Festus Orestes Butt. Convicted in a bribery scandal in 1905-6, Butt served part of his sentence, paid a fine and went home to Eureka Springs; he was re-elected to the Senate in 1927 and '29. (Arkansas State Archives/David Ware)