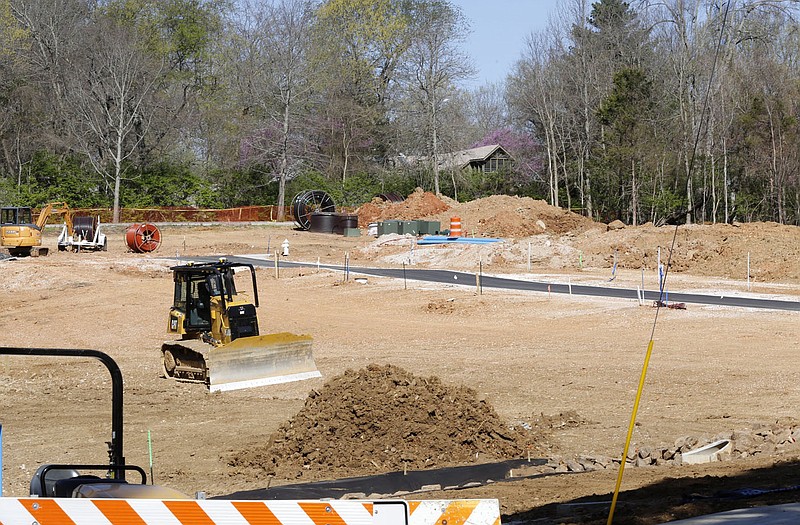 Not in my backyard," a slang expression for neighborhood resistance to development projects, hinders efforts to curb escalating housing costs, according to developers and city officials in Northwest Arkansas.

The region needs more affordable multifamily housing in neighborhoods that include retail, office and commercial developments, they say.

The expression includes the phrase "my backyard," reply residents and neighborhood activists. People who live in a neighborhood -- often for decades -- have legitimate interests, know the area and ought to have their views respected, they contend.

Stereotypes about "NIMBY" objections to apartments and other development are overblown, they say.

"We just don't want three-story apartments where people can look into our backyards," said David Sloan, a Rogers resident opposed to a recent rezoning in that city. The rezoning of a lot near the Forrest Park subdivision where he lives permits apartments, among other uses.

Residents of Northwest Arkansas often complain zoning classifications used by the larger cities in the region are too broad to give them any assurance of what will happen to property in their "backyards."

"Something's wrong when the rights of a single developer who owns a piece of property, but who is never going to live there, has more rights than the dozens or maybe hundreds of people who live in the same neighborhood," Orton said.

The rights and needs of an entire city or region matter, too, said Rogers Mayor Greg Hines. Matthew Hoffman, an architect and former member of the Fayetteville Planning Commission, and Bill Burckart, a developer and Bentonville City Council member, agreed.

Conflicts between neighborhoods and future development will increase as Northwest Arkansas grows, planners and developers said. That growth must take new directions to hold down housing prices such as walkable neighborhoods that mix commercial and residential uses, Hoffman and Burckart said.

Orton argued the response to affordable housing needs has already veered too far into the realm of city planners and developers telling neighborhoods what is good for them.

Housing prices in Northwest Arkansas are increasing well ahead of the region's prevailing wages, according to the 2019 Our Housing Future report from the Walton Family Foundation.

The average monthly rent of multifamily housing in Benton and Washington counties went from $557 a month in 2013 to $741 a month in 2020, according to industry figures. Prices to own a home are growing at a similar rate, figures show.

"It is in our nature that we don't like change. But, if we don't change, then the way Rogers is going to look when we reach 100,000 residents is scary," Hines said. The city, now about 70,000 people, would become a wide-ranging sprawl and a traffic snarl, he said.

"I remember when the trail system went in," Hines said, referring to the Razorback Greenway. The trail system runs from Bella Vista in the north through Rogers and Springdale to south Fayetteville.

"People told us burglars and rapists would use the trail to get into their homes. Now, years later, some of those same people have cut holes in their privacy fences so they can have their own private entrance to the trail. And nobody's ever been seen running down the trails with somebody's 60-inch, flat-screen TV, either."

"If we don't fight for it, people are not going to be happy with what this community looks like in 15 years," Hines said.

Arkansas has few restrictions compared to other states on what a property owner can develop, according to Hines. That makes pressure on city councils one of the few places where residents can stop a project.

One of the main tools of city planning is zoning. The type of development that can go on land depends on the zoning a city designates for it. These designations can be commercial, residential or some other purpose. A developer who wants a different use than the one a parcel is zoned for must seek a rezoning. Such a request requires a city planning commission's agreement and final approval by the city council.

"I'd have people ask me what would be developed in the vacant field next to the house they wanted to buy. I'd have to tell them I didn't know. There is no way I could give any assurance to anyone what would happen. Even if the owner of the field had plans, those plans could change."

"Just this past Tuesday, we settled a lawsuit involving a rezoning where we were clearly in the wrong -- and it still wasn't certain the settlement was going to pass that night."

The settlement acceptance Hines referred to took place March 23 and rezoned the same piece of property Sloan and other nearby residents expressed concerns about. The 9.6 acre lot lies west of North 40th Street and south of West Olive Street. It was zoned highway commercial. The rezoning makes the lot neighborhood commercial, which allows apartments.

"There are 44 different uses in the zoning being requested," said Carrie Perrien Smith, who lives near the rezoned lot and is a Benton County Quorum Court member.

Springdale Planning Director Patsy Christie said her city is reviewing zoning definitions to make them more precise because the same issues come up in rezoning requests there. Residents want a zoning to give a clear idea of what can and cannot be done with property, she said.

The Rogers property will be and should be developed, and the property owner should be able to make a profit, said Sloan and other rezoning opponents. Their concerns largely stem from the wide-open number of uses allowed by the zoning classification and the fact the owner has not declared any definite plans.

There are no definite plans for that lot, said Thomas Hopper of Rogers, president of property owner Tallgrass Development. The reason for the rezoning was to comply with the city's Comprehensive Growth Map, he said. The City Council adopted that map Feb. 26, 2019, and the commercial zoning of the lot no longer complied with it, he said.

Tallgrass dropped the idea of putting apartments on the property in the past because of neighborhood opposition, Hopper said. Whether the company tries to develop the property or sell it is undecided, he said, but the intent of the city in the growth map should be followed.

Hopper is the recently retired chairman of Crafton Tull, a full-service engineering firm.

The city council denied Tallgrass' rezoning request Nov. 24. The company filed suit Dec. 15 in Benton County Circuit Court contending the city violated its own plan plus the recommendations of the city planning authorities to approve it.

Tallgrass dropped its suit after the council reversed itself March 23.

The March decision undermined the faith of the neighborhood in protection offered by the city, residents said in interviews. Brenda Sloan said she agreed with the assessment of council member Marge Wolf, who voted against the rezoning and said at the meeting: "I don't understand why a vote comes to us for a yes or no if the rule is that we can't say 'no'."

A good example of the ease of stopping a multiuse project is the Beacon Block project last year in Fayetteville, Hoffman said. The project gained almost every needed approval from city planning and the City Council, he said, but needed a variance -- an exception to city rules -- on its parking lot plans. Objections to that variance delayed the project for weeks. Lumber prices spiked in the meantime halting the project for now.

"It will get built," developer Ward Davis said Friday. He first brought plans for the project to the city a year ago this month. The plan is to have commercial space on the lowest floor. The project is designed with three stories facing College Avenue and two stories facing Cleburn Street.

Rising housing prices and the difficulties of harmonizing new development with existing neighborhoods is a major challenge in every growing city, said Mervin Jebaraj, director of the Center for Business and Economic Research at the University of Arkansas.

"Los Angeles County in California has fewer housing units today than it had in the 1960s" despite uninterrupted growth, he said.

Home prices nationwide in January, typically a slow month for the market, were up 14% over the same month the previous year, according to news reports. Sales jumped 24 percent compared to January 2020, the news outlet Politico reported. A home put up for sale was sold, on average, in three weeks. The housing inventory nationwide is at its lowest ebb since at least 1999.

Orton helped lead efforts to stop a rezoning of the Markham Hill area of Fayetteville, but the City Council unanimously approved the change in 2018.

The 144 acres rezoned at Markham Hill includes the Pratt Place Inn and Barn. The property stayed in the Pratt family from the early 1900s until developers bought it in a bankruptcy sale. The acres of woods, springs and rock formations have remained largely unchanged through generations. The University Heights neighborhood lies just northeast, with Razorback Stadium to the east and Interstate 49 on the western border.

A major misconception is a project opposed in one neighborhood wouldn't be eagerly supported elsewhere, she said.

"There are areas that oppose businesses and so-called walkable neighborhoods with a mix of commercial and residential property. Some neighborhoods want that. Some don't," Orton said.

It's foolish to think every neighborhood everywhere wants a commercial-residential mix in it, but that's the preference of city planners, she said.

The most hurtful stereotype is when objecting neighbors are assumed to oppose apartments to keep out Black or Hispanic residents, she said.

"I've been accused of that, and my reply is 'My street is more diverse than yours.'"

"What I tell people is 'Thank God for NIMBYs. NIMBY saved the Buffalo River" from being dammed. "NIMBY saved Mount Kessler," site of a regional park in Fayetteville. "NIMBY saved African-American cemeteries and Native American heritage sites. Anything that's worth saving has been saved by NIMBY." 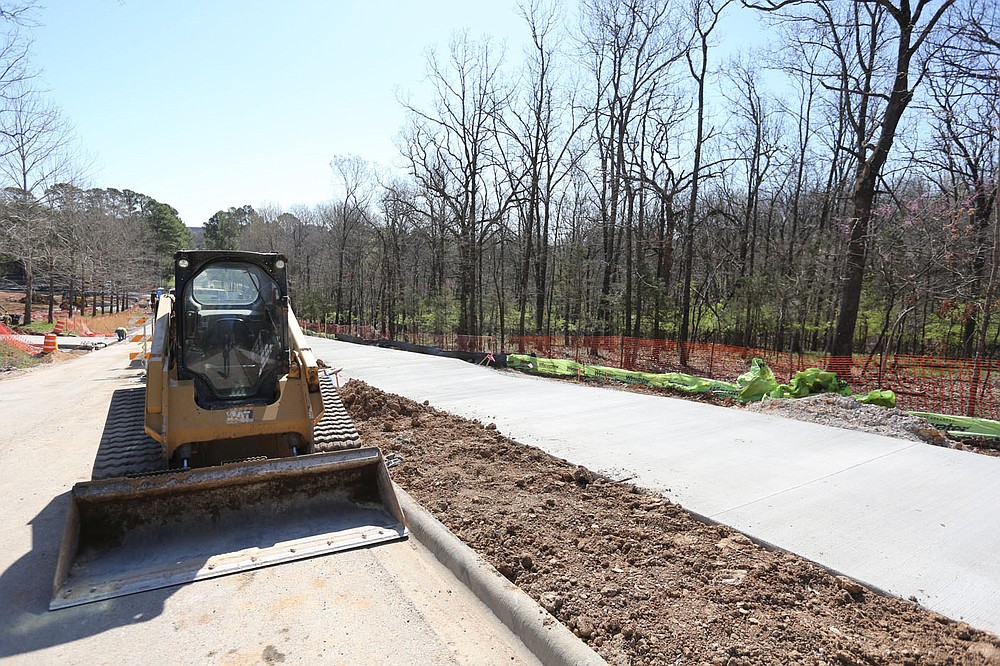 A new sidewalk is visible as infrastructure work continues Thursday, April 1, 2021, on the first phase of the development on Markham Hill near the intersection of Markham Road and Cross Avenue in Fayetteville. Check out nwadg.com/photos for a photo gallery. (NWA Democrat-Gazette/David Gottschalk) 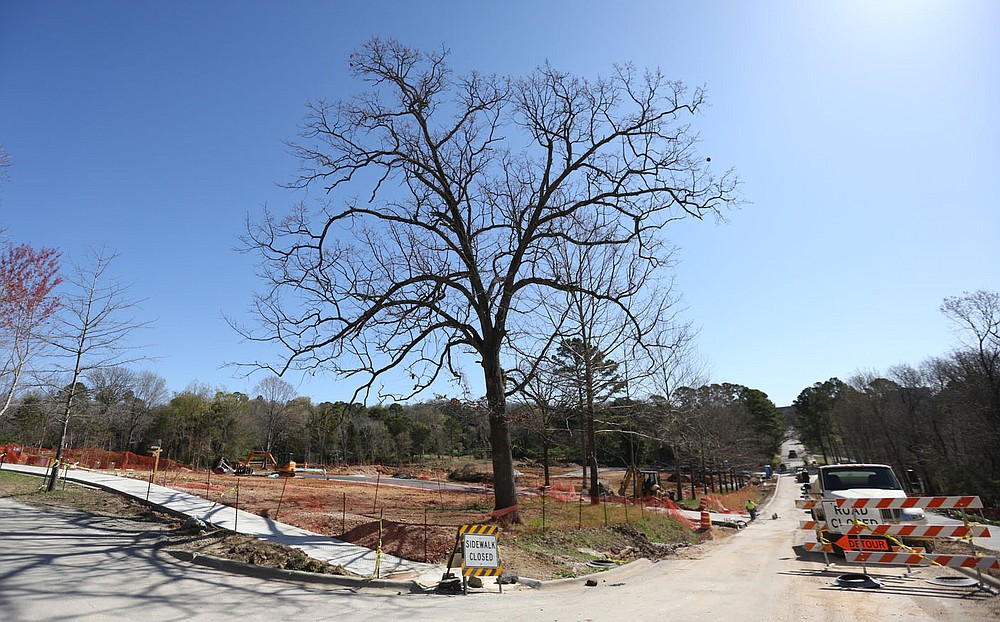 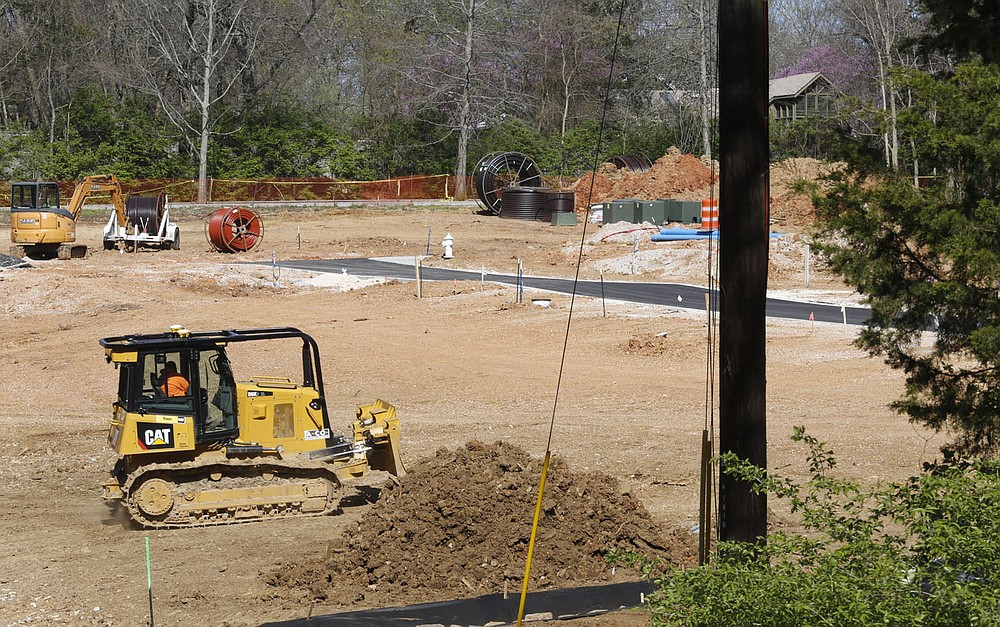 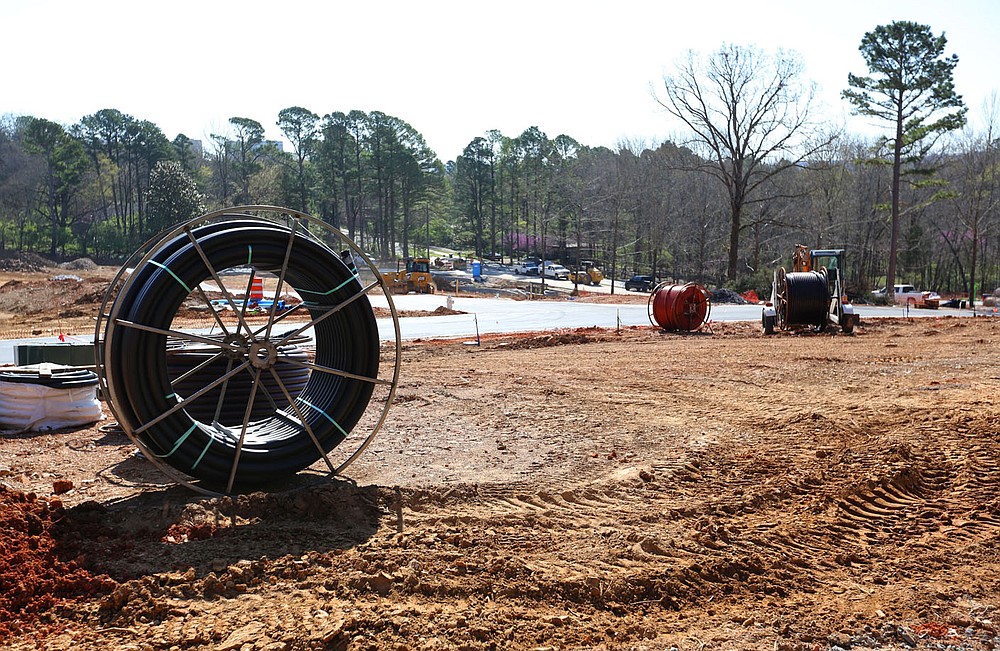 Infrastructure work continues Thursday, April 1, 2021, on the first phase of the development on Markham Hill near the intersection of Markham Road and Cross Avenue in Fayetteville. Check out nwadg.com/photos for a photo gallery. (NWA Democrat-Gazette/David Gottschalk)
More News

Editor’s note: This is the last in a four-part series exploring the challenges and possible solutions for providing affordable housing in the region’s larger cities.