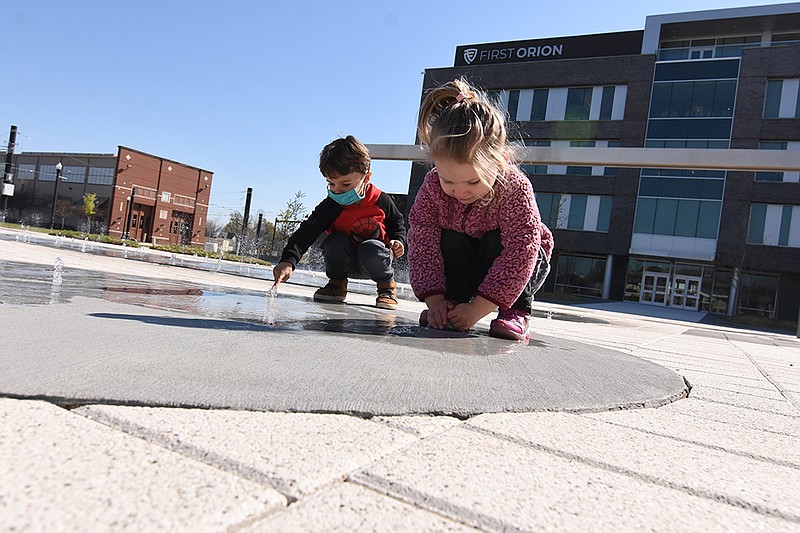 North Little Rock is eager to put Argenta Plaza to use this summer in hopes of recapturing the excitement that surrounded its debut before covid-19 forced officials to scrap many of their plans last year.

The $5.36 million plaza, at 510 Main St. in the Argenta Arts District, opened in late 2019 but has been limited in what it could offer because of restrictions aimed at slowing the spread of the coronavirus.

Mayor Terry Hartwick said Tuesday he has spoken with Karen Trevino, president and chief executive officer of the North Little Rock Convention and Visitors Bureau, about plans for the plaza now that vaccine distribution is well underway and restrictions are being lifted.

"I told Karen, and I have told everybody else, that everything is on the books when it comes to the plaza," Hartwick said.

Trevino said the agency is now renting the facility for private events and public events are being planned as well.

"There will be times that nothing is scheduled because we want to have the Plaza open just for people to eat dinner and relax," Trevino said in an email Tuesday. "The fountains and rain curtain have now been turned on, and it makes for a great place to relax."

Ballet Arkansas, in partnership with the Convention and Visitors Bureau, will offer two weekends of classes and performances, May 1-2 and May 21-23, at the plaza.

Trevino said officials also are scheduling a "Live at the Plaza" music and arts series that will be held on the third weekend of each month through September.

"We will have that announcement very soon," she said. "We're just tying up all the loose ends first."

Argenta Plaza opened Nov. 30, 2019, as part of the city's annual Northern Lights Festival, with an estimated 10,000 people taking part in the festivities.

A second grand opening was scheduled for May 2020, when the plaza's fountains and water wall were to be unveiled, but those plans were derailed by the pandemic.

Trevino said having no public events at the plaza last year contributed significantly to the financial hit the Convention and Visitors Bureau took because of the pandemic.

"There was very little income for the Plaza yet we had some hard costs -- utilities, technology, service contracts, purchases, cleaning, landscaping, grounds keeping, etc.," Trevino said in her email.

Despite the losses, Trevino said she views the derailment as a blessing in disguise.

"It was our learning year for grasping the technology, water features, etc.," she said. "Now we are prepped and ready to go."

The plaza found new life near the end of last year when the City Council established the Argenta Outdoor Dining District in an effort to help boost the city's economy during the pandemic. The dining district allows patrons to carry drinks in public within the district's boundaries from 10 a.m. to 10 p.m.

Late last year, the Downtown Council and business owners also agreed to close Main Street from Broadway to Fifth Street on weekends to allow outdoor dining and entertainment in the area. That will continue this year but will be limited to the third weekend of each month.

Argenta Plaza includes a "front porch" area with swings, a stage with a 40-foot video projection wall, LED lights, a water wall and fountains, and a "backyard" area with trees.

Trevino said there has been a lot of interest in plaza rentals this year.

"Our director of events and sales, Erica Warden, oversees and manages the Plaza," Trevino said. "She is getting so many phone calls and emails from people wanting to reserve for small private parties all the way up to wanting to reserve it for festivals."

Hartwick said North Little Rock's former mayor, Joe Smith, brought a lot of enthusiasm when it came to the plaza, and Hartwick said he hopes to follow in Smith's footsteps.

"With the ability to social-distance there, I believe we can bring that excitement back," he said.