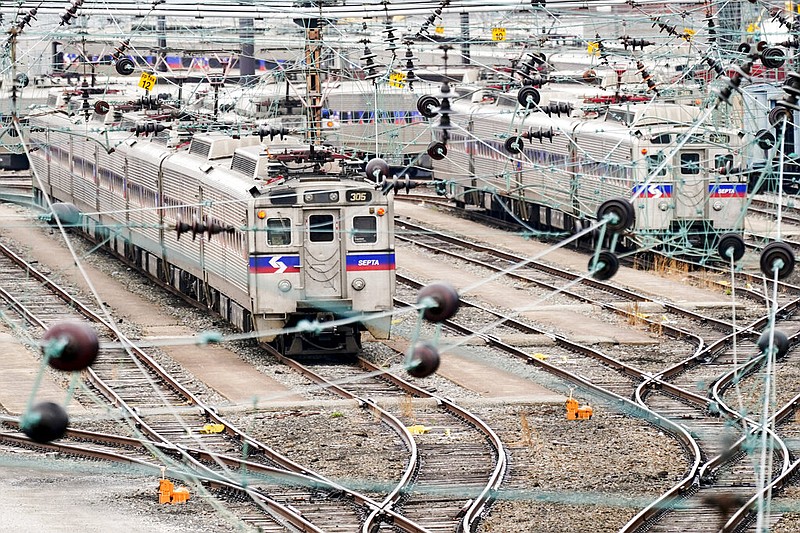 Southeastern Pennsylvania Transportation Authority trains are parked near 30th Street Station in Philadelphia on Wednesday, March 31, 2021. President Joe Biden and lawmakers are laying the groundwork for another of his top legislative priorities — a long-sought boost to the nation's roads, bridges, trains and other infrastructure. (AP/Matt Rourke)

WASHINGTON -- Republicans are seeking to support limited infrastructure spending in President Joe Biden's spending proposal, which would require scaling back the $2.25 trillion plan by more than two-thirds, a senior GOP senator said.

With Biden's Americans Jobs Plan on the table for less than a week, administration officials and Senate Republicans took to the Sunday news shows to lay out opposing positions. As Biden faces calls from parts of the Democratic Party to go bigger, Republicans are focusing their opposition on an increase in the corporate income tax rate that they say will hold back job creation.

"It'll expand our economy's potential," Deese said on "Fox News Sunday," adding that "we have a long way to go" to restore U.S. employment to pre-pandemic levels in the shorter term.

[Video not showing up above? Click here to watch » https://www.youtube.com/watch?v=yMt2Y0Ca65U]

Sen. Roy Blunt, a Missouri Republican, said he could envisage bipartisan support on improving facilities like roads and airports, and possibly water systems and expanding broadband access -- if the administration pared the package to something like $615 billion

"You'd still be talking about less than 30% of this entire package, and it's an easily doable 30%, I think," he said on Fox. "When people think about infrastructure, they're thinking about roads, bridges, ports and airports."

"It's important that we upgrade our definition of infrastructure, one that meets the needs of a 21st century economy, and that means we need to be funding and incentivizing those structures that allow us to maximize our economic activity," Rouse said on CBS' "Face the Nation."

Biden said that these investments are critical to the country as it emerges from the pandemic and faces challenges related to climate change and a global economy.

Republicans portrayed Biden's bid to cover the cost of the package by raising the corporate income tax to 28% from 21%, a reversal from former President Donald Trump's 2017 tax cut, as a nonstarter that would kill jobs.

"Let me just tell you, that's going to cut job creation in the United States of America," Mississippi Sen. Roger Wicker said on NBC's "Meet the Press." The 2017 tax cuts were "a plan that worked," he said.

"I'm all for looking for ways to pay for it" without raising corporate taxes, Wicker said.

The eight-year proposal is a follow-up to the $1.9 trillion economic relief bill passed in March with only Democratic votes. It seeks a minimum tax on profits U.S. corporations earn overseas, increasing the rate to 21% from roughly 13%. The plan includes several other corporate increases, including more IRS audits on companies.

Senator Republican leader Mitch McConnell said in his home state of Kentucky on Thursday that his party won't support the Biden plan as now written, "as much as we would like to address infrastructure."

Biden's plan faces a tough road ahead in Congress as Republicans have already said they won't vote for a measure paid for by tax increases. Some progressives say Biden's plan isn't large enough. Other congressional Democrats, including Senate Finance Committee Chairman Ron Wyden, said he likes Biden's direction but plans to release his own international tax proposal to fund an infrastructure proposal.

Deese said the administration is willing to have a "conversation" on the plan. He declined to speculate to what extent Biden might be willing to change his plan.

Despite the legislative challenges ahead, Transportation Secretary Pete Buttigieg said he believes that bipartisan consensus is attainable.

"I've had enough conversations, especially the one-on-one conversations away from the cameras with members from both sides of the aisle, to know there really is a sincere interest in getting this done," Buttigieg told The Associated Press. "Now, politics can get in the way of that, of course. But I think unlike a lot of other issues where there is just deep passionately felt profound disagreement about what to do, here there's a really healthy overlap in terms of our ideas about what has to happen, even if there is a lot of difference on how to get there."

Just two months into the job, Buttigieg has met with two dozen House members and 13 senators and in recent days has upped that pace, talking to lawmakers in both parties every day. Biden on Thursday tasked Buttigieg and four other Cabinet members -- the "Jobs Cabinet" -- with selling the administration's infrastructure and climate plan.

The proposal offers big stakes for Buttigieg at the department, where he pledges to promote public transit and other green alternatives to gas-guzzling cars and apply an "equity lens" to infrastructure projects.

The White House says it's planning a second proposal in the coming weeks to address so-called social infrastructure including child care, health care and college tuition. That plan will be paid for by tax increases on wealthy households and could cost more than $1 trillion.

"Now is the time to begin addressing our physical infrastructure and our human infrastructure. I want to see that happen as soon as possible," Sen. Bernie Sanders, I-Vt., said on CNN's "State of the Union."

The competing pressures mean Biden's proposal likely will have to be broken up into two or even three pieces of legislation. Some parts will need Republican support to make it through the Senate, while other provisions may be put into fast-track budget bills that need only Democratic votes to pass.