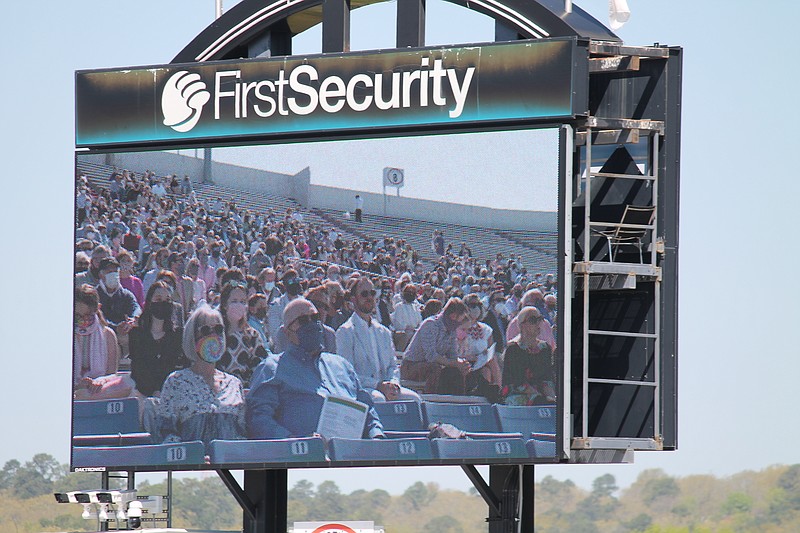 Masked congregants are shown on this screen watching the "Easter With Pulaski Heights" service at War Memorial Stadium in Little Rock on Sunday, April 4, 2021. Organized by nearby Pulaski Heights United Methodist Church, the communitywide event was a way for the church to hold a larger gathering with social distancing and other protocols in place to prevent the spread of covid-19. Arkansas Democrat-Gazette/Francisca Jones

"This is the first privilege I've had to preach here in front of an audience in 13 months," said Robbins, senior pastor of nearby Pulaski Heights United Methodist Church. "I have preached to an empty room week after week, so it is a great joy to see your beautiful, masked faces this morning."

As Christians in Arkansas found ways to celebrate their second Easter during the coronavirus pandemic on Sunday, one of the largest gatherings for the occasion of Christ's resurrection returned to Little Rock Sunday in a reimagined form.

[Video not showing up above? Click here to watch » https://www.youtube.com/watch?v=swASwBkff2E]

The church organized "Easter With Pulaski Heights," an ecumenical event open to all. The church tradition of hosting Easter sunrise services stretches back several decades until last year, when the covid-19 virus forced churches to cancel services and events throughout the state. War Memorial Stadium itself isn't a stranger to larger religious gatherings; a Little Rock congregation has recently rented the venue for monthly church services, and previously hosted the Rev. Billy Graham's crusades in 1959 and 1989.

While the statewide mask mandate ended Tuesday , Little Rock is among a handful of cities that have kept mask mandates in place as the number of Arkansans who have been vaccinated continues to grow.

Sandra Young of Searcy, Ashley Williamson of Little Rock and Christie Young of North Little Rock have attended the church's sunrise service in the past.

"It's just a weird feeling," said Christie Young of being gathered with thousands of other people, after more than a year of staying distanced. "I think Easter's a perfect day for people to start being together in large groups. It's just hope[ful] for the future, everybody getting together."

Limiting the number of those closely gathered to sing meant a large choir wouldn't be possible for this year's service, and Ozark Point Brass joined with several musicians and a vocal quartet for music; Central High School senior and soprano Tania Kelley, who performed as Nia Renée in "American Idol" earlier this year, gave a rendition of "Give Me Jesus."

During his sermon, Robbins recounted the tale of a fire years ago, the memories of which were stirred again in his mind years later, when the field near the church where he preached caught fire.

That time, firefighters reached the flames in time and the church was saved; the grass destroyed, Robbins recalled passing again not long after, and noticing renewal.

"Where there had been nothing but charred black remains and the smell of death, the smell was now gone," Robbins said. "There was grass growing and flowers were blooming in that very spot; life had come out of death. And on that Easter Sunday morning, in so many ways, that symbolized something powerful -- that death does not have the final hold on us, that there is life and there is hope and there is new opportunity, and there is great joy that awaits all of us."

After the service, those leaving the stadium were greeted by staff and clergy, and a table of plastic eggs and other Easter goodies.

Shirley Smith and Brian Norman of Little Rock attended the service together; members of Greater New Life Church in Maumelle, Norman said he liked that the service was outdoors; Smith said the covid protocols such as spacing made her feel safe in attending.

"What a beautiful day to have the chance to be together on Resurrection Sunday," said Smith.

Emily Erkel, a member of Pulaski Heights, sported a dress and sneakers, having walked to the service from her home near the church.

"I haven't worn my name tag in 13 months; it was nice to put it on today," she said with a chuckle.

Erkel said there was "definitely a joy in gathering here with other people that I have taken for granted in my daily and weekly life," and that experiencing that joy on Easter Sunday was special.

"I loved being in the stadium to hear the Scripture and the message read in a way that it echoed," Erkel said. "It was just a good auditory reminder of the way we as individuals get to echo God's word in how we see and treat others.

"It's a different kind of Easter but a really good one."