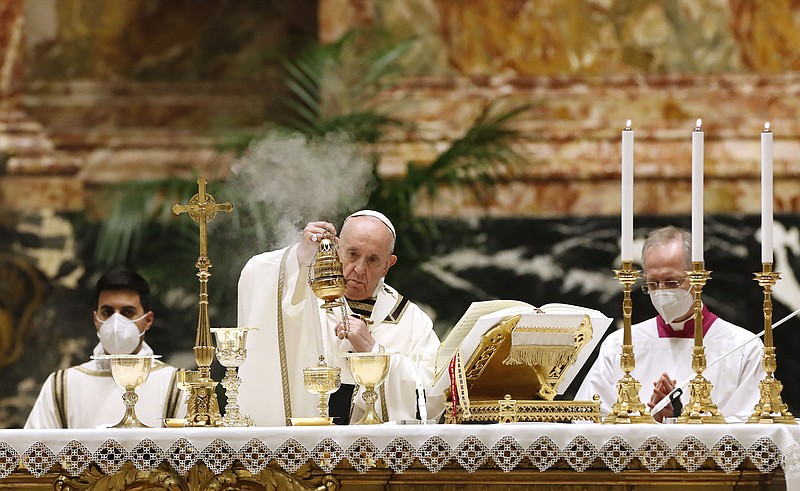 During the Easter season last year, the language of "social distancing" and "flattening the curve" was still new for Christian communities and clergy members as they tried to adapt to the realities of the coronavirus.

Priests filled empty pews with photos of their congregants. Others held drive-by services. Masks and family Zoom sessions found their place alongside long-standing traditions such as Easter meals and egg hunts.

Little is different as Christians celebrate Easter today, but there are some bright spots as vaccination levels rise and some restrictions ease.

In Canada, where several provinces are imposing new rules to temper a variant-fueled resurgence of coronavirus cases, officials from all political stripes and levels of government urged against in-person Easter gatherings with those outside one's household, particularly those held indoors.

"I know I've said the same thing before every major holiday over the past year," Prime Minister Justin Trudeau said at a news conference in Ottawa. "But this time, what's different is that even if the end of the pandemic is in sight, the variants mean the situation is even more serious."

Much of Europe, also beset by variants, is back under lockdowns, though they are less stringent than in the past.

France, Germany, Ireland, Spain and Italy, among others, have tightened restrictions on movement and meetings.

In France, people cannot travel more than 6 miles from their homes except in certain cases under rules that took effect Saturday. But President Emmanuel Macron said the restrictions would be less strictly enforced over Easter weekend.

Belgium has barred nonessential travel from outside the country, though it has allowed movement to continue within. Spain, in contrast, has permitted European travelers with negative tests to enter, even though movement between regions is restricted.

[Video not showing up above? Click here to watch » https://www.youtube.com/watch?v=0dK6iNvQzQk]

Italy has been classified as a high-risk red zone, which means people are banned from traveling beyond their home regions for Easter celebrations. The government, however, has permitted Italians to still travel abroad and imposed testing and quarantine rules for anyone entering the country.

Authorities in Britain just eased restrictions after a three-month lockdown. There are fears that large Easter gatherings will be difficult to prevent.

In Jerusalem, religious sites that were shut down at this time last year are open to a limited number of worshippers as communal life in vaccine-saturated Israel returns. Still, there will not be the usual influx of pilgrims, as travel into the country remains restricted.

The Czech Republic has eased its nightly curfew to allow for Easter religious events.

In Australia, some 60,000 people a day can attend the Royal Easter Show at Sydney's Olympic Park for the annual showcase of Australian traditions. Authorities, however, remain mindful of the pandemic: A contact-tracing system is ready in the event that any coronavirus cases are detected.

In South Africa, where some restrictions have been eased, indoor religious gatherings were restricted to 250 people, and outdoor ones to 500 people, ahead of the holiday.

In Rome, Pope Francis urged his flock to not lose hope even through the continued "dark months" of the pandemic as he celebrated a scaled-back Easter vigil service in St. Peter's Basilica on Saturday.

Only about 200 masked people were allowed to attend the service, which marks the period between Christ's crucifixion and his resurrection on Easter Sunday.

For the second year, the Vatican cut out the traditional sacrament of baptism for a handful of adults to limit the chance of contagion. Usually a long, late-night ritual, this year's vigil service also started earlier than usual to respect Italy's curfew.

But the service began in the dramatic way it always does, with the pope lighting a single candle in the darkened basilica and then sharing its flame with others until the pews slowly begin to twinkle and the basilica's lights are turned on.

In his homily, Francis said Easter offers a message of hope and new starts.

"In these dark months of the pandemic, let us listen to the risen Lord as he invites us to begin anew and never lose hope," he said. "It is always possible to begin anew because there is a new life that God can awaken in us in spite of all our failures."

Francis, who again eschewed a mask, limped considerably through the service, in a sign that he is suffering through a prolonged bout of sciatica nerve pain.

Today, Francis is to preside over Easter Mass before a similarly small group of faithful and deliver his traditional Urbi et Orbi blessing "to the city and the world."

Usually the Easter Mass is celebrated before tens of thousands of people in a flower-decked St. Peter's Square. But this year, Francis will celebrate the service in the basilica and deliver the blessing from the altar, to prevent crowds from forming in the piazza.

In New York, the Rev. Henry Torres told his parishioners gathered on Palm Sunday last weekend -- in socially distanced rows of half-empty pews -- that God had not abandoned them.

The virus has killed dozens of regulars at the church, St. Sebastian Roman Catholic Church in Queens, and the pandemic forced it to close its doors for months last year. But the parishioners' attendance now, he said, is a sign of hope.

"Even through difficulties, God is at work," Torres said. "Even when people are suffering, even if it may seem that God is silent, that does not mean that God is absent."

That is a message that many Christians -- and the churches that minister to them -- are eager to believe this Easter, as the springtime celebration of hope and renewal today coincides with rising vaccination rates and the promise of a return to something resembling normal life.

Religious services during the Holy Week holidays, which began on Palm Sunday and end on Easter, are among the most well-attended of the year, and this year they offer churches a chance to begin rebuilding their flocks and regaining their financial health. But the question of whether people will return is a crucial one.

Across the city, many churches have still not reopened despite state rules that would allow them to do so.

The Rev. Calvin Butts III, pastor of Abyssinian Baptist Church in Harlem, a nationally prominent Black church in New York, said concerns over the coronavirus, and its disproportionate effect on the Black community, would keep his church from reopening until at least the fall.

Nicholas Richardson, a spokesman for the Episcopal Diocese of New York, said many of its churches had also not reopened. When the diocese introduced a program last fall to allow its 190 parishes to pay a reduced tithe to the diocese, roughly half of them applied.

"It varies church by church," he said. "Pledges are not necessarily dramatically down, but donations given to the collection plate are hopelessly down."

The Rev. Patrick West, pastor of St. Sebastian, said he and other priests have fretted over the return of parishioners. They still fear the virus, which has killed tens of thousands of New Yorkers, and many have become accustomed to watching Mass online from the comforts of home, he said.

"The word I use is 'repatriate,'" he said. "How are we going to repatriate people back to the church? I don't think it's a matter of people's faith; it's a matter of health and safety. They need to be convinced that it is safe to worship in a congregation again, and I think that is absolutely right."

Churches in New York were closed for 15 weeks during the first months of the pandemic last year, which included Holy Week. Even after they reopened at 25% capacity, many parishioners stayed away. That deprived parishes of both the people whose physical presence wills the community into existence, and the donations they make each week that help pay the bills.

The resulting turmoil has wreaked havoc on the finances of churches across the New York region and the country, including icons such as St. Patrick's Cathedral in Manhattan and more humble houses of worship like St. Sebastian. All depend heavily on weekly donations to pay their expenses, which include utilities, staff salaries and an 8% tax paid to the local diocese.

Many Christians attend in-person services only on Christmas and Easter. Donations given on those two holidays make up 10% of the annual collection for most Catholic parishes, said Matthew Manion, director of the Center for Church Management at Villanova University.

He added: "Easter will be an interesting experiment. The spring will tell us a lot about what fiscal year 2022 and beyond will look like."

Nett Church in Georgia's Gwinnett County plans to hold an Easter service indoors, the first in-person service in the church buildings since March 15, 2020.

The church, like many others, has gone online, with congregants watching streamed services. Nett Church -- which has campuses in Lawrenceville, Lilburn and Norcross -- has also held outdoor "house churches," where members gather to watch the livestream together, following health guidelines.

Today, things will be different.

"We don't say we're opening on Easter because we were never closed," said lead pastor Rodrigo Cruz. "Theologically, Easter brings in hope, a new future and a new season. It's about the resurrection of Jesus and the message he brought. Our community is still living in fear [and] panic, and Easter reminds us to be louder in our message of love and hope."

For many churches, that hope has come in the form of covid-19 vaccines as more and more inoculated members are slowly leading to a return to pre-pandemic worship. Easter is the first large religious observance for some churches that plan to hold services inside for the first time since the pandemic began.

New data from the Pew Research Center found that many people are more confident they can safely attend services. Roughly 4 in 10 people who typically attend religious services at least once or twice a month say they actually have done so, in person, during the past month -- an increase of 9 points since last summer, according to the survey conducted in early March.

But that trend only goes so far, and many worshippers are still not comfortable being inside. Just 39% of those surveyed plan to attend in-person services this Easter, much lower than the 62% who said they typically go to church on Easter. For many congregations, this Easter Sunday will be the second observed with their doors closed to congregants.

Amos King aches to get back inside Beulah Missionary Baptist Church in Decatur, Ga.

He knows, though, that not everyone will come back. At least not right away.

"I think churches will lose some attendees on Sunday," said King, a 59-year-old deacon at the church. "I don't think a lot of people will come back in a hurry."

Early in the pandemic, houses of worship were the sites of some covid-19 outbreaks, including several in Georgia. It forced many to improve their technology efforts by streaming or recording services online or holding Zoom-inspired worship and small-group gatherings. Experts say the changes have propelled many places of worship into the future and ushered in a new era for their parishioners.

Information for this article was contributed by Miriam Berger and Amanda Coletta of The Washington Post; by Nicole Winfield of The Associated Press; by Liam Stack of The New York Times; and by Shelia Poole of The Atlanta Journal-Constitution (TNS). 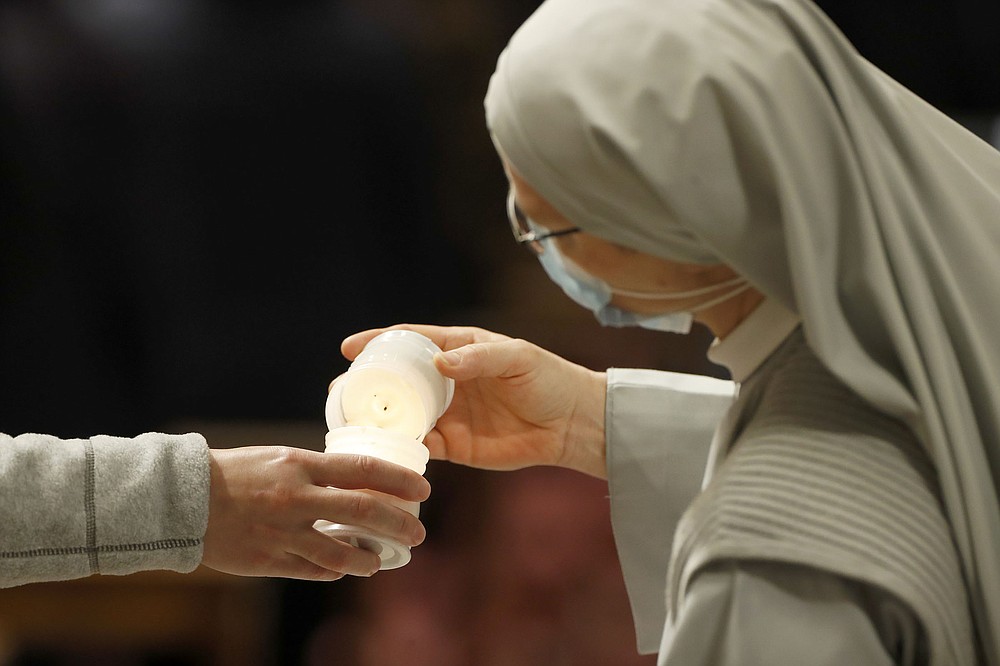 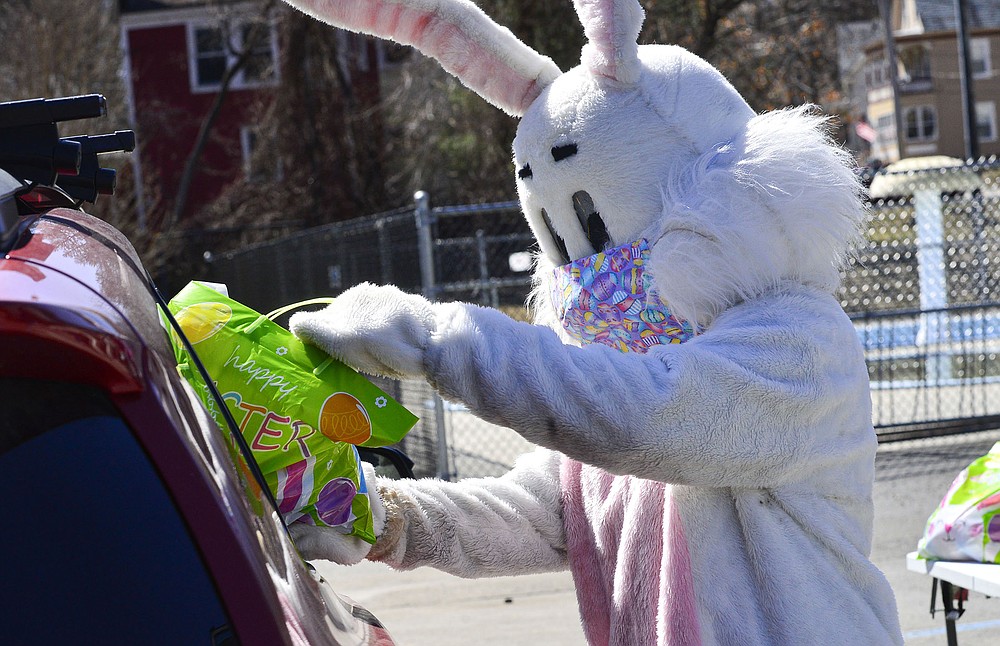 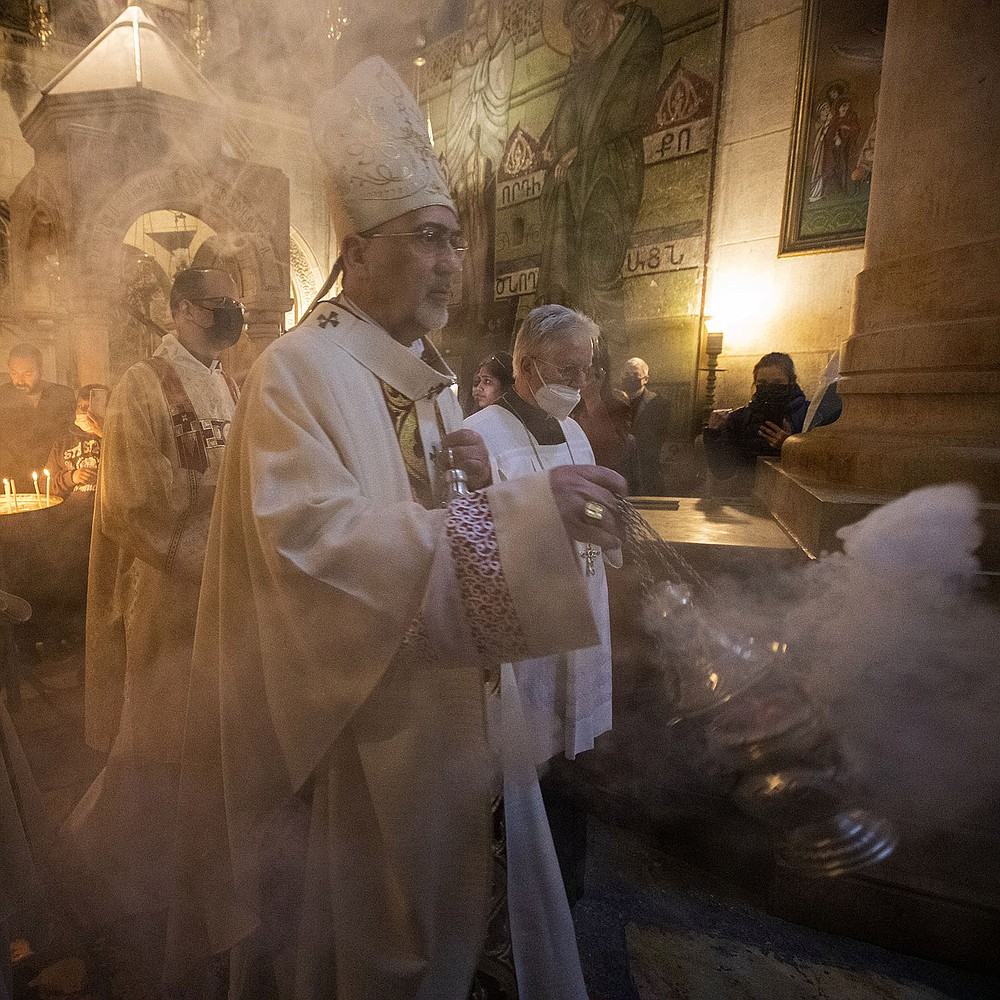 Latin Patriarch of Jerusalem Pierbattista Pizzaballa leads the Holy Saturday Easter Vigil procession in the Church of the Holy Sepulchre, traditionally believed to be the site of the crucifixion of Jesus. More photos at arkansasonline.com/44pascha/. (AP/Ariel Schalit)
ADVERTISEMENT