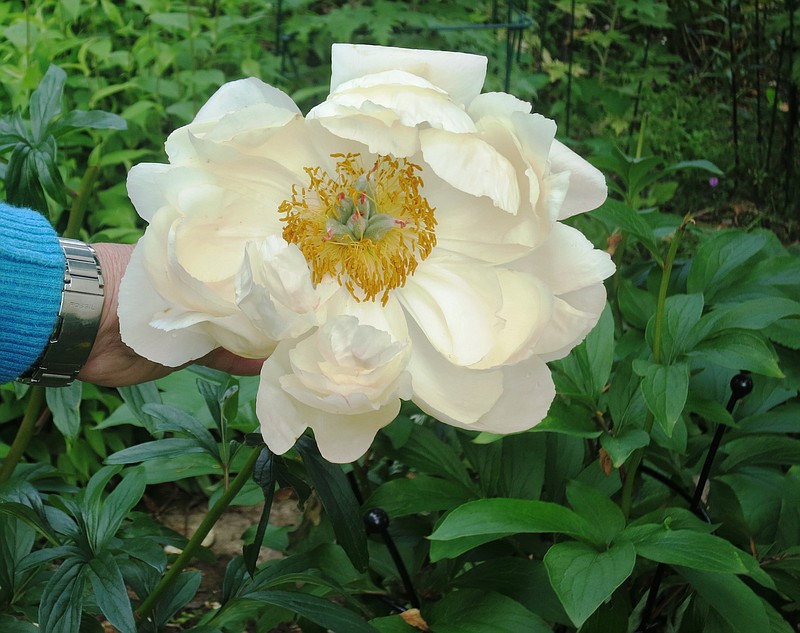 Peonies are long-lived perennials that do best in full sun. (Special to the Democrat-Gazette/Janet B. Carson)

The peony is a beloved flower of early to mid-spring. It is valued for the mammoth size, varying form and sumptuous colors of its diverse blooms. If some simple principles are followed, common problems with peonies can be avoided.

The most common garden peony is the herbaceous peony, itself a plant in myriad incarnations after a century or more of breeding. The foliage dies to the ground each fall, reemerging early next spring. The so-called tree peony is a medium-size woody shrub that drops its leaves each fall but keeps its stems through the winter. A relatively new type, called the Itoh, or intersectional peony, displays the best attributes of the tree peony — beautiful, natural flowers on an elegant plant — but blooms later and for much longer, and it's quicker to reach blooming age. Its stems are woodier than the herbaceous peony and don't need staking.

Herbaceous peonies typically grow to three feet high and two feet across. The tree and Itoh types get a little taller and much broader after several years. 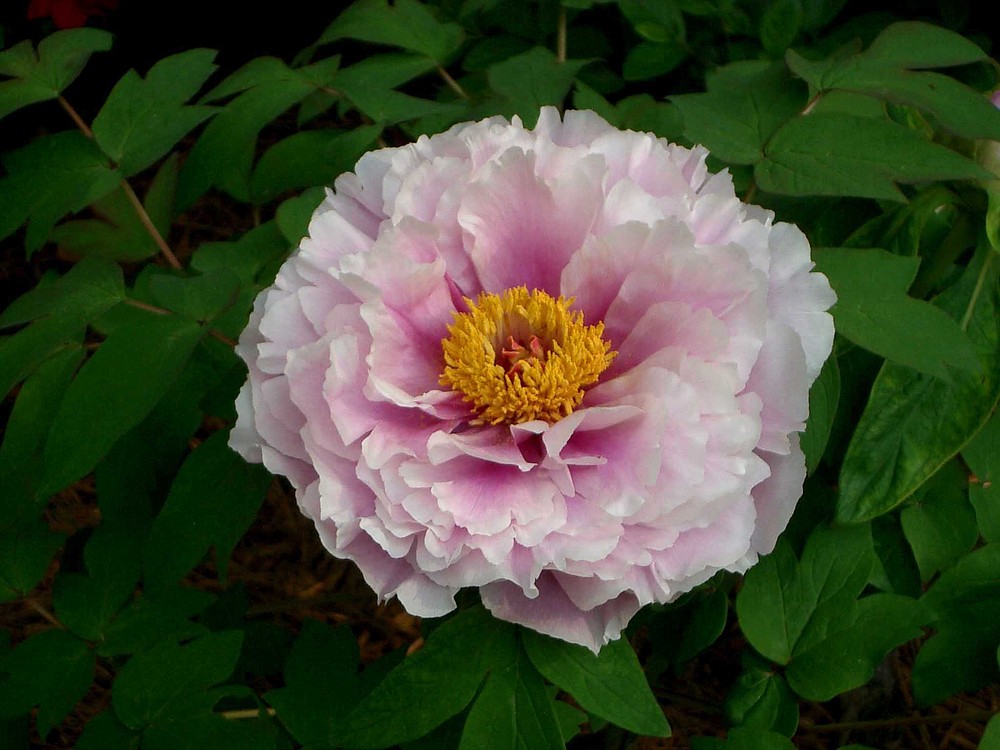 A close up of this peony reveals multiple shades of pink in one bloom. (Special to the Democrat-Gazette/Janet B. Carson)

Peonies are grown in mixed borders as a seasonal highlight plant, but because each plant needs its own space, it should not be crowded with other plants. Herbaceous peonies make luxurious cut flowers and can be grown in cutting gardens for that purpose.

Peonies originate in colder regions, need sustained winter cold for their vitality and begin to struggle in hot, humid regions. This is one of the reasons heavily petaled double varieties can fail in the South, checked either by the heat during their long development period or by disease related to spring rains. In hotter states, avoid heavily double herbaceous peonies and set plants where they will get a little shade (but not too much); this is more important with tree and Itoh peonies. They are only moderately resistant to deer browsing.

Peonies are hardy in Zones 3 to 7/8. They can be planted in early spring and fall. The optimum time is late summer/early fall to allow robust root growth during the establishment period. Peonies are more sensitive to planting depth than other perennials. The crown, where the new shoots emerge, should be set one to two inches below the soil surface, but no deeper, or flowering will fall off. Excessive mulching will have the same effect. 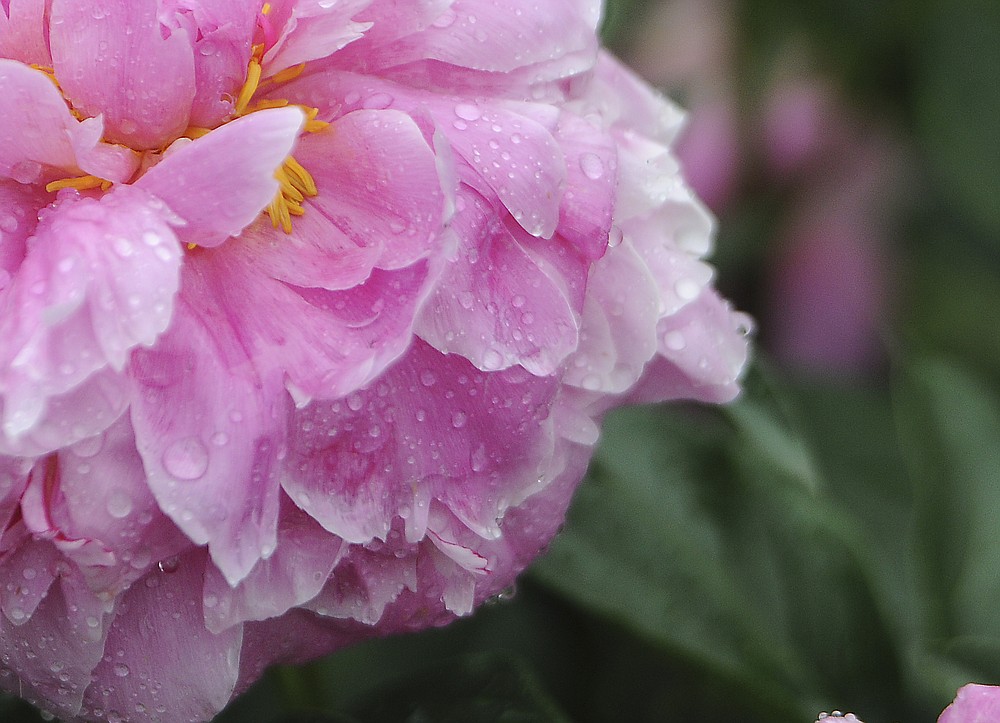 Peonies fall victim to spring storms; stems splay or break and cannot be righted. Not all herbaceous peonies do this, but staking offers insurance against collapse. This should be done in early spring before growth gets to be more than a few inches. Again, avoid excessively double varieties, which become top-heavy. Tree and Itoh peonies don't need staking.

Peonies benefit from a balanced feed when spring growth begins, but keep fertilizer away from foliage, and avoid excessive feeding. Organic fertilizers are generally more gentle.

Foliar diseases can be a problem. Remove diseased leaves as they appear, and clean up and remove all the fallen foliage in the fall. Sugary secretions on the bud attract ants, but the insects are harmless and should be left alone. 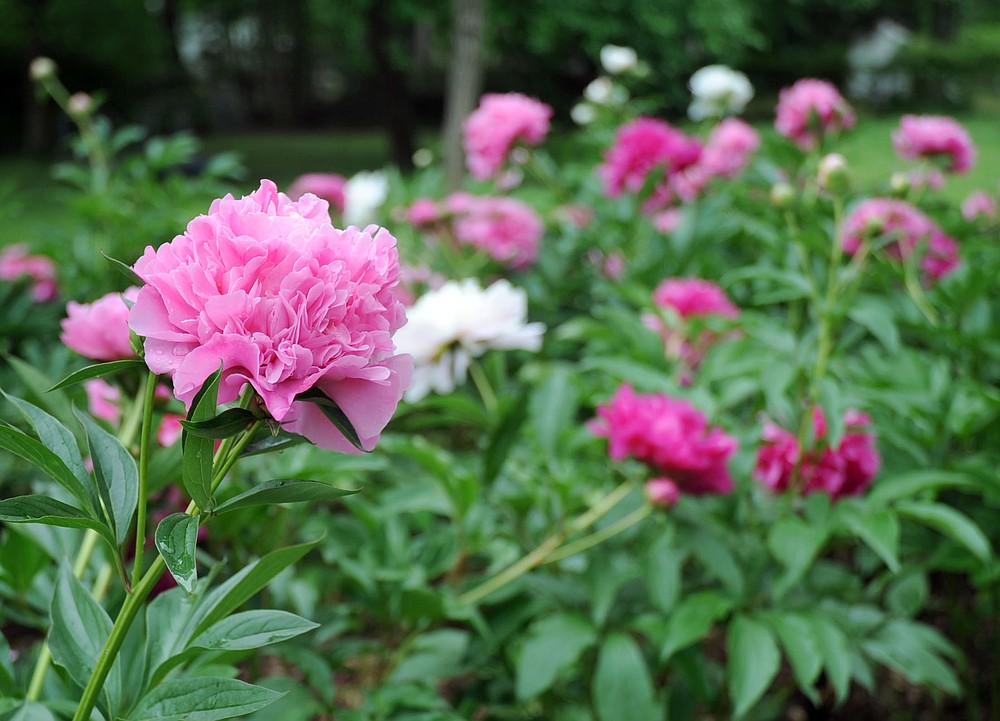 The blossoms can be so large that plant stakes are needed to hold the stem up. (Hot Springs Sentinel-Record file photo)

Peonies live a long time but may need lifting and dividing if flowering falls off, usually as a result of encroaching shade. The act of transplanting may delay flowering again for a year or two.

When it comes to varieties, peonies offer an embarrassment of riches. The single and semidouble flowering peonies of every type are the stuff of Japanese prints, supremely elegant and the easiest to grow. The American Peony Society issues its Gold Medal award to a superior variety annually. Recent winners have included Hillary, Angel Emily, Pietertje Vriend Wagenaar, Mahogany and Topeka Garnet.