Pandemic has curtailed in-person worship for a year, but things are getting better by DAVID CRARY AND MARIAM FAM THE ASSOCIATED PRESS | April 3, 2021 at 3:02 a.m. 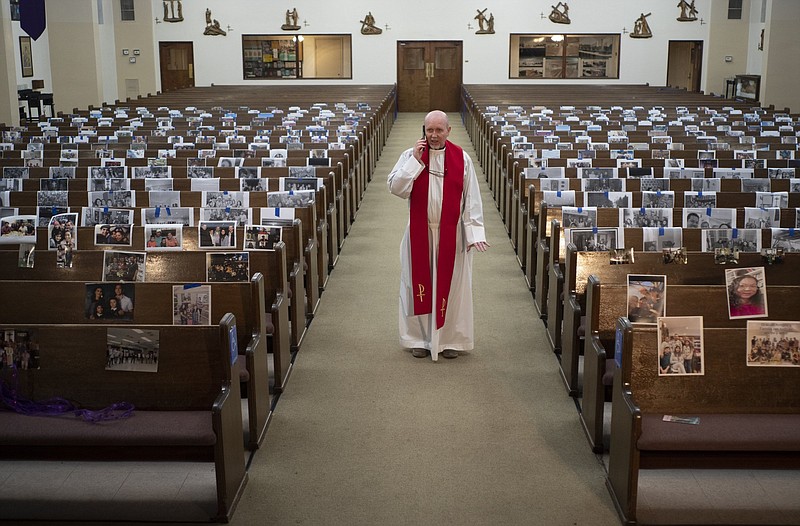 For Christians across the United States, Easter services on Sunday will reflect an extra measure of joy as the nation experiences rising optimism after a year of pandemic. Even if still observing restrictions, many churches may draw the largest numbers of in-person worshippers in months.

It's a season of major holy days for other faiths as well, occurring in a brighter mood than a year ago. Jews are observing Passover this week, and Muslims will enter the holy month of Ramadan in about two weeks.

In Houston, the Rev. Meredith Mills is eagerly anticipating a return to in-person worship Sunday in the sanctuary of Westminster United Methodist Church. Except for a few Christmastime services that drew a handful of people, the church has been worshipping on its front lawn since October.

"Many of our people are two weeks past their second shot of vaccine, so the comfort level is a lot higher now," said Mills, who had her own bout of covid-19 in January. "It almost feels like we've been in Lent for a year, and we are ready for Easter."

Mills recently made a video of herself walking through the empty sanctuary and reflecting on a year of realization that God is everywhere -- in people's homes and "even over Zoom" -- but sacred spaces remain vital.

"So this space is about to reopen," she said. "On Easter Sunday we are going to be masked and distanced ... but we're going to gather and we're going to sing, 'Christ the Lord is risen today, Alleluia, Alleluia.' We're going to let the 'Alleluia' ring off of these walls."

Rabbi Jonathan Perlman of New Light Congregation in Pittsburgh said the Passover holiday has strong parallels to the pandemic in that "it was first celebrated in quarantine," after God ordered Israelites in Egypt to shelter in their homes through the night.

"Now we know that many of us took shelter in homes for an entire year; travel was forbidden; meeting in person in large groups violated basic principles of health," Perlman said via email. "For me, like my Israelite ancestors, there was something transformative about the entire experience. ... The vaccination felt like a gift from God."

Perlman has been offering services virtually and in person at a chapel in the Beth Shalom synagogue. New Light formerly worshipped at the Tree of Life synagogue, where three members of its congregation were among 11 Jews killed by a gunman in 2018.

Rabbi Motti Seligson of the Hasidic organization Chabad-Lubavitch said many U.S. Jews held Passover Seders in small groups due to the pandemic. There was unexpectedly large demand online for the Chabad.org Haggadahcq FJ, a new instructional version of the sacred text for the start of Passover -- that was designed for small Seders, with about 300,000 downloads instead of the expected 100,000, he said.

Ramadan, a time for fasting and worship, is typically centered on togetherness as Muslims congregate for prayers and iftars or evening meals to break the daily fast. Last year the pandemic forced Muslims to re-imagine some rituals, and some will continue to do so this Ramadan.

Salima Suswell, founder and executive director of the Philadelphia Ramadan and Eid Fund, said the charity is partnering with mosques to provide "grab-and-go" iftars three days a week. For the feast at the end of Ramadan, it will distribute toys and decorations to help families celebrate privately.

"We want to make families aware that there is a way to still enjoy the benefits of the holy month of Ramadan while safely social distancing at home," Suswell said.

It's a far cry from 2019, when the group hosted an iftar dinner at a museum and an end-of-Ramadan celebration in a park drew about 15,000, Suswell said.

At the Muslim Association of Puget Sound in Redmond, Wash., worshippers may again gather to perform Ramadan's taraweeh prayers after being unable to do so in 2020.

"A lot of people are really excited," said Sheikh Adam Jamal, assistant imam. "There's people, senior [citizens], who probably have been doing taraweeh [at a mosque] every year since they were young. ... They've missed it for a year -- that was just devastating."

However, capacity will be limited at the mosque, which during Ramadan is typically packed with people standing shoulder-to-shoulder for prayers. People can also drive by to pick up boxed iftar meals.

"It'll be different from before," Jamal said, "but it'll be closer than it was last year."

In Spanish Fork, Utah, about 25,000 Hindus traditionally converge at the Sri Sri Radha Krishna Temple to throw colored powder for the Holi celebration marking the advent of spring. This year, the gathering has been rescheduled for late September in hopes that all may join safely instead of drastically curtailing attendance.

"We want to have it at a time when everybody can come, ... If things continue on track and everyone gets vaccinated, we should be OK for September," festival coordinator Charu Das said.

Das said he loves the festival because it celebrates diversity: "It acknowledges that we complement each other -- different ethnicities, different nationalities, different genders -- God creates in unlimited varieties."

Information for this article was contributed by Luis Andres Henao and Jessie Wardarski of The Associated Press. 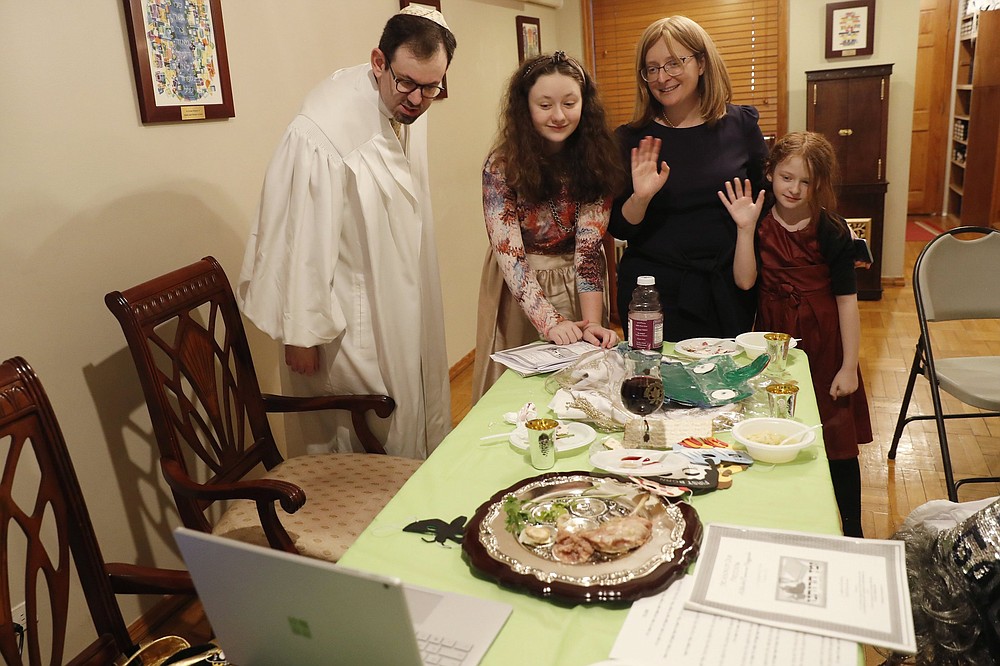 Rabbi Shlomo Segal (left) and his family wave goodbye to participants after he conducted a virtual Passover Seder for members of his congregation, friends and family broadcast on YouTube from his home in the Sheepshead Bay neighborhood of Brooklyn during the coronavirus outbreak in New York last April. From left are Segal; daughter Shira, 12; wife, Adina, and daughter, Rayna, 8. This year, the Sabbath led directly into Passover, limiting the use of technology for Segal and his congregants. Instead of streaming their Seder, the synagogue provided online workshops before Passover so families could do it on their own. Segal says that many of his members are still reluctant to gather together in person. (AP/Kathy Willens) 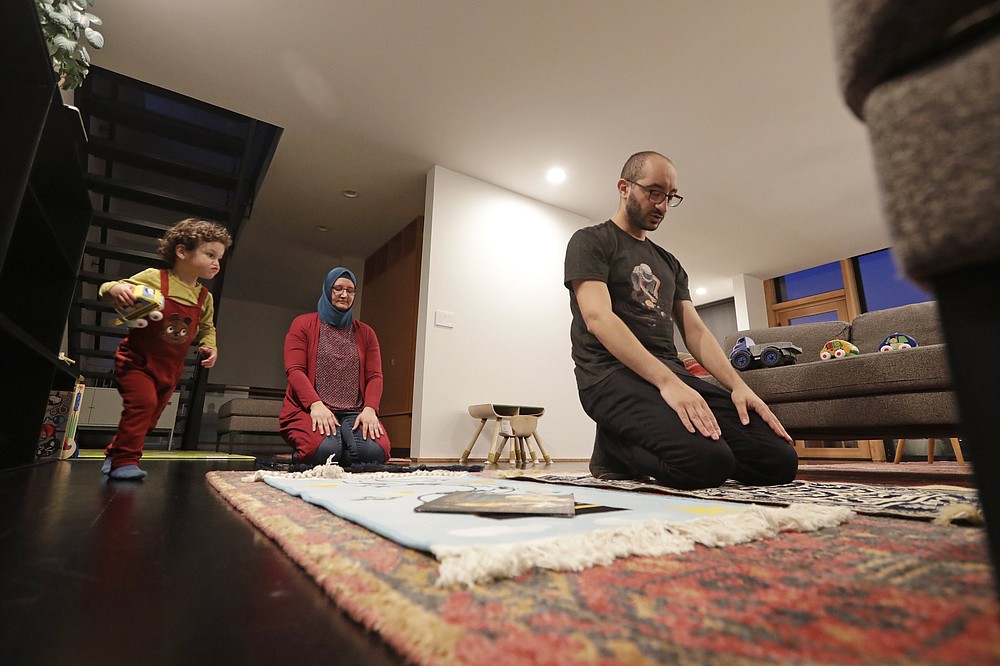 Ahmad Kamel (right) performs the Maghrib prayer with his wife, Nadia Chaouch, as their son Ahmad Kamel runs past after the family broke the Ramadan daily fast just after sunset in their home last April during the coronavirus outbreak in Seattle. (AP/Elaine Thompson) 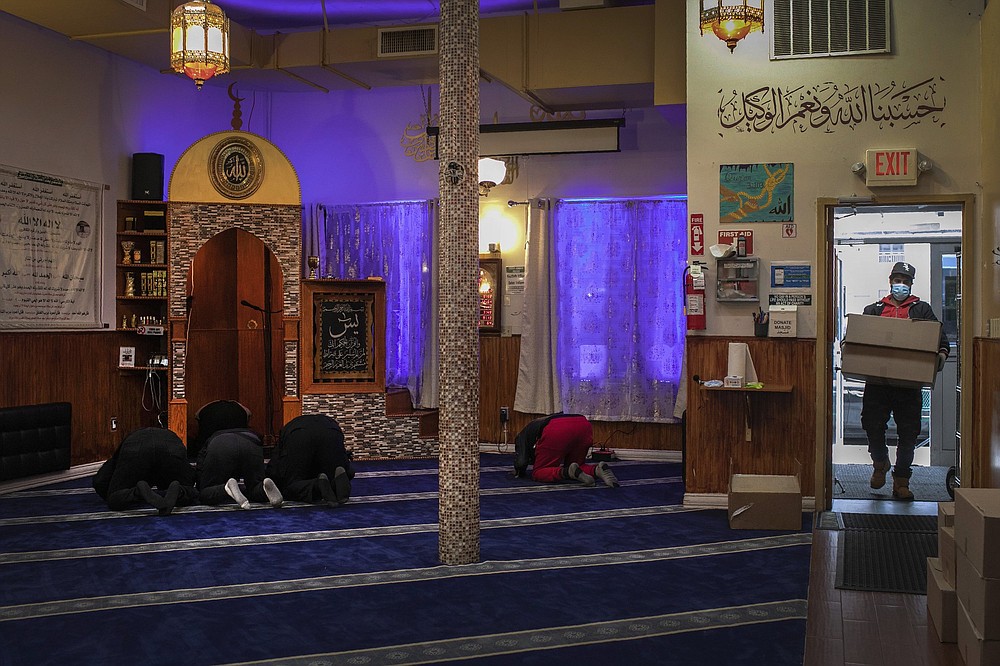 A volunteer carries food donations while other staff members and volunteers with Muslims Giving Back pray in the Muslim Community Center in the Bay Ridge neighborhood of Brooklyn in New York last April. (AP/Wong Maye-E) 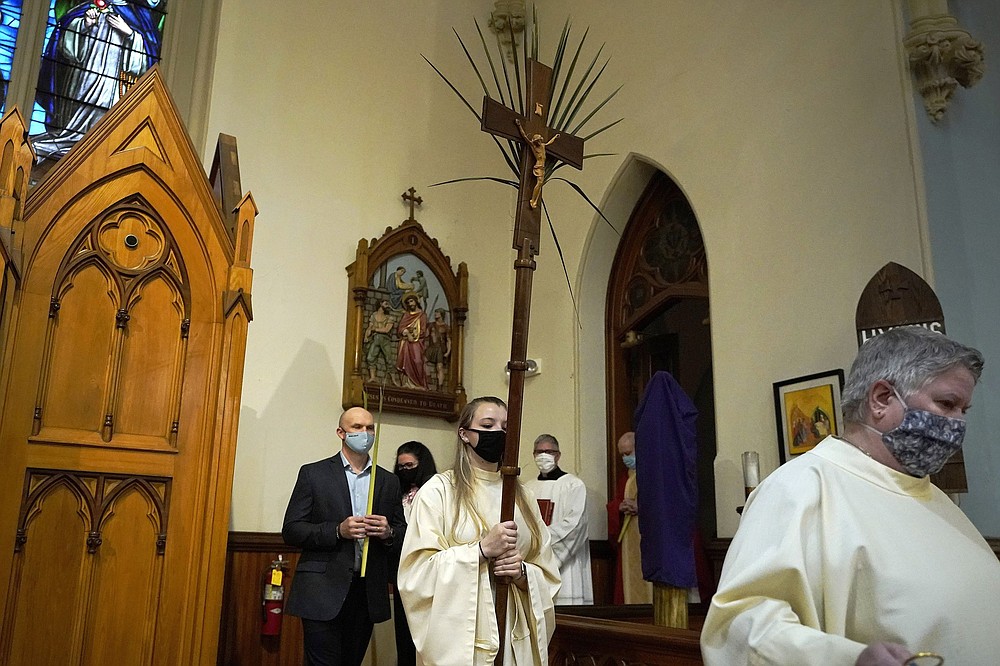 Altar server Samantha Holmes, of East Brookfield, Mass., carries a crucifix with palm leaves during a procession at the start of Palm Sunday Mass at Mary, Queen of the Rosary Parish in Spencer, Mass., on Sunday. For Christians across the United States, Easter services on Sunday will reflect an extra measure of joy as the nation experiences rising optimism after a year of pandemic. (AP/Steven Senne) 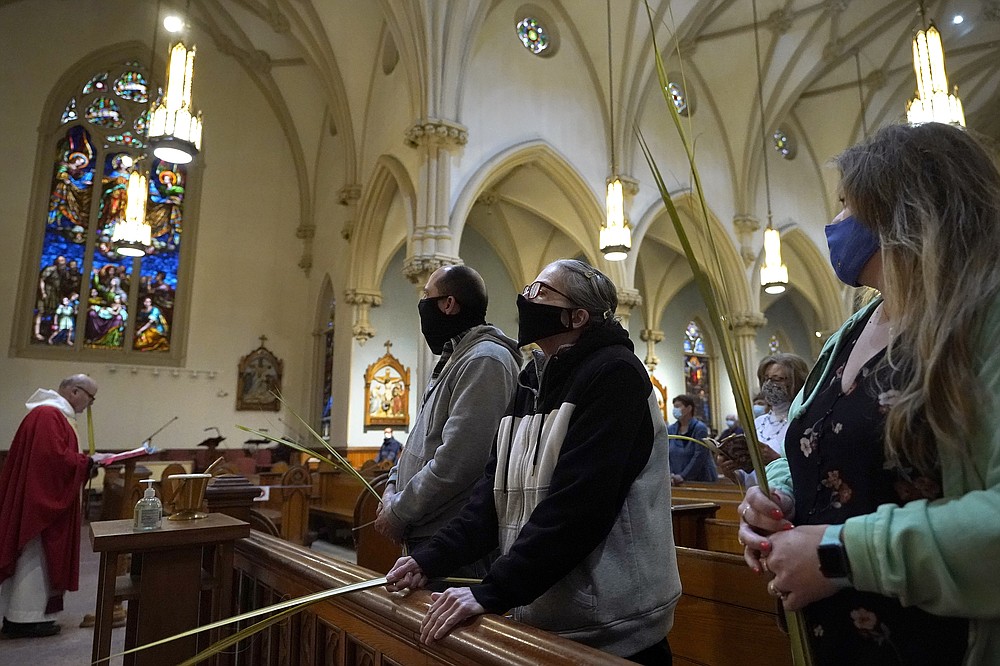 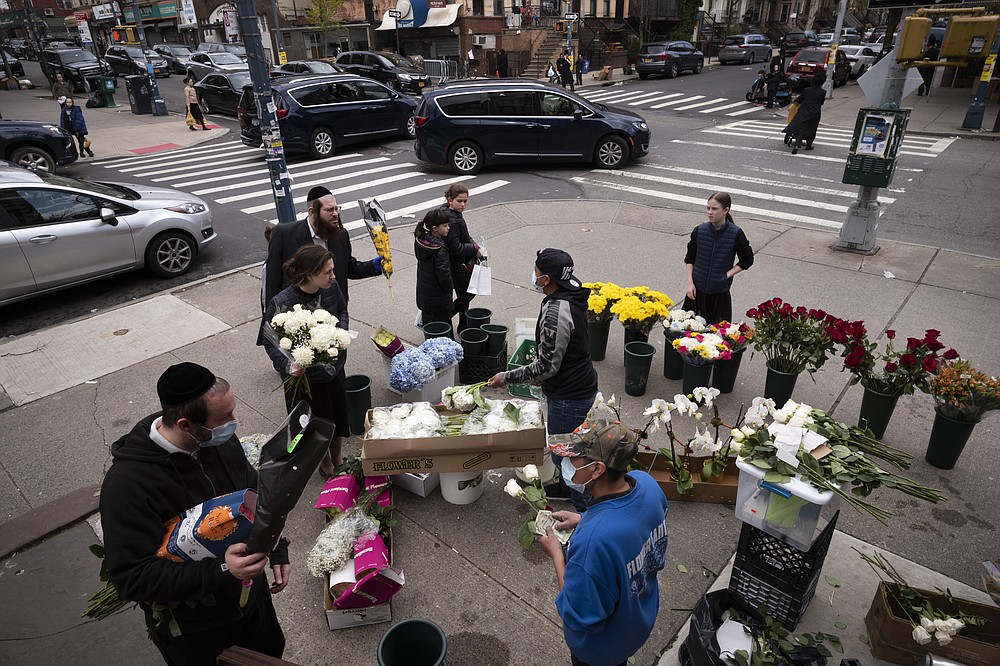 FILE - In this Wednesday, April 8, 2020 file photo, people buy flowers from a sidewalk flower stand on the first day of Passover in the Williamsburg neighborhood of New York during the coronavirus pandemic. (AP Photo/Mark Lennihan) 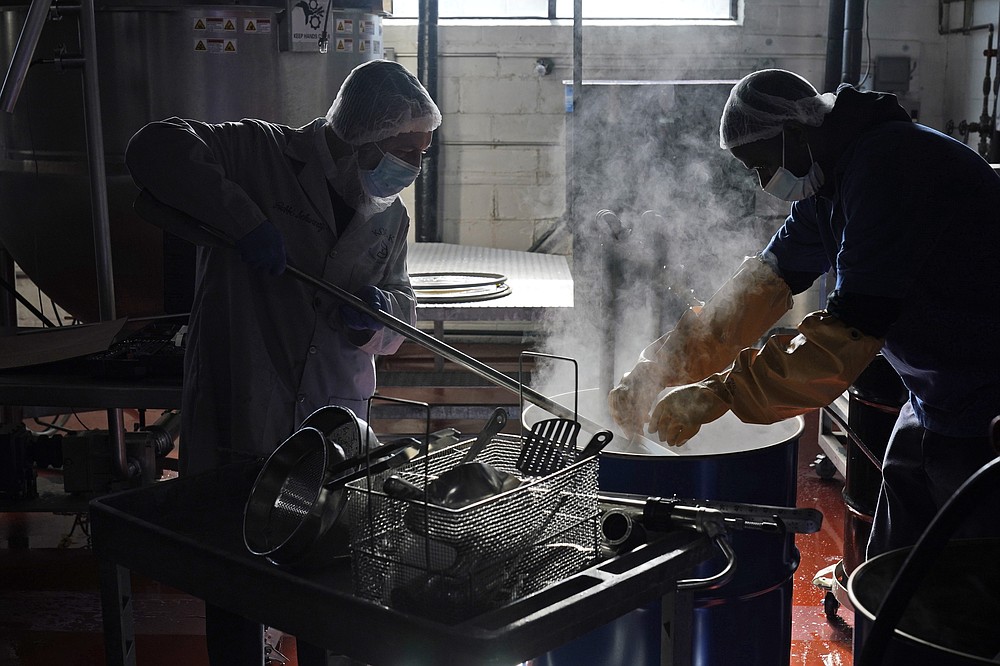 FILE - In this Thursday, Jan. 7, 2021 file photo, Rabbi Joseph Schwartz, left, and Ryan Eleazar use boiling water to prepare equipment for the Hanan Products' kosher-for-Passover production run in Hicksville, N.Y. At Hanan Products, which since 1946 has made primarily whipped toppings, icings and dessert fillings for the bakery industry, cleaning and production for kosher-for-Passover products begin long before the weeklong holiday that this year starts in late March. (AP Photo/Seth Wenig) 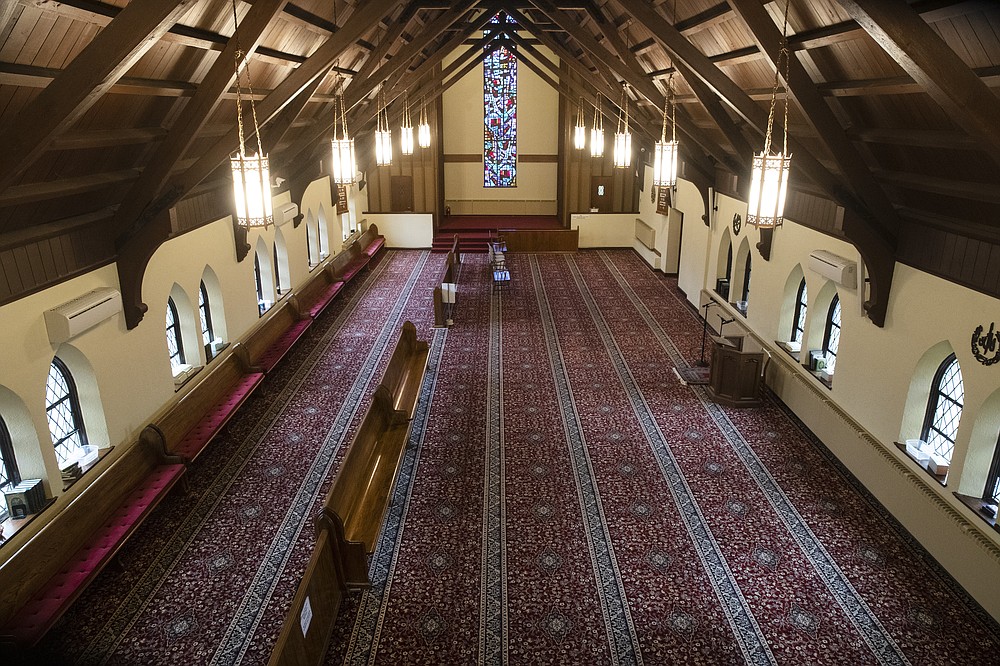 FILE - In this Thursday, April 23, 2020 file photo, the Prayer Hall at the Islamic Cultural Center of Willow Grove in Willow Grove, Pa., stands empty during the holy month of Ramadan, due to social distancing guidelines during the coronavirus outbreak. (AP Photo/Matt Rourke)
ADVERTISEMENT