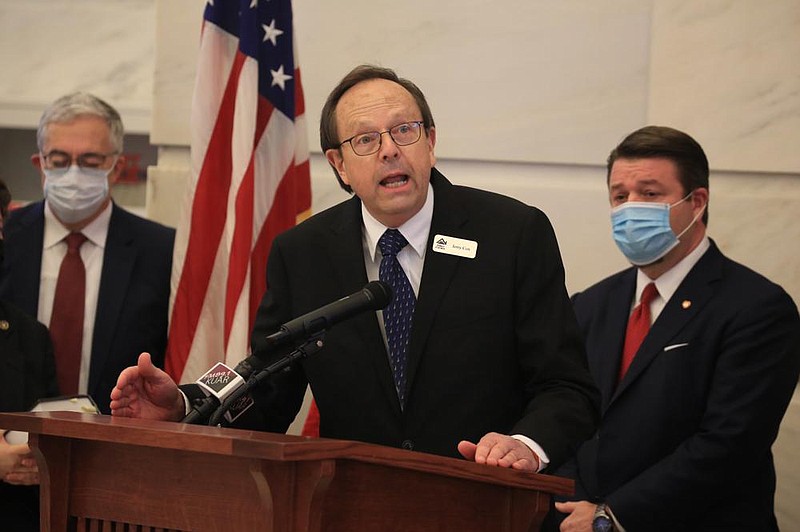 Jerry Cox, the head of the Family Council Action Committee, speaks Wednesday Feb. 10, 2021 at the state Capitol during a press conference about Senate Bill 6 that would ban all abortions except those to save the life of a mother. More photos at arkansasonline.com/211abortion/. (Arkansas Democrat-Gazette/Staton Breidenthal)

The Family Council, a faith-based advocacy organization and powerful influence at the state Capitol, announced its opposition Friday to Senate Bill 622, which the organization said was akin to hate crimes legislation it has opposed in the past.

The announcement potentially dealt a blow to the bill's prospects just a day after it was filed by leaders in both the House and Senate, who referred to it as a "class-protection bill" as a way of distancing the measure from previously failed hate crime bills.

The bill has also attracted opposition from more liberal advocacy groups, with traditional supporters of hate crimes laws labeling SB622 as a "sham."

The sponsors of SB622 include Senate President Pro Tempore Jimmy Hickey, R-Texarkana, and House Speaker Matthew Shepherd, R-El Dorado, as well as the chairmen of the House and Senate Judiciary committees. Gov. Asa Hutchinson, a Republican, announced his support of the bill on Thursday.

Family Council President Jerry Cox released a statement Friday, saying, "Our conclusion is that this bill's language is vague and subjective."

"S.B. 622's protections for religious liberty are not adequate," Cox added. "The bill does not contain sufficient safeguards to prevent cities and counties from enacting their own, more stringent hate crimes ordinances. It does not do enough to protect free speech or prevent thought-policing. These are serious concerns."

In response to the Family Council's statement, Hutchinson weighed in to say he was disappointed in the group's decision.

"This is an important bill to pass to highlight that no individual in Arkansas should be targeted for a violent crime for their race or other characteristic," the governor said. "I have supported Family Council through the years, and its opposition to this bill comes as a surprise and I find it counter to the foundational principles of the organization."

Under SB622, prosecutors would be allowed to seek longer prison terms for certain violent crimes committed against members of a "recognizable and identifiable" group with shared "mental, physical, biological, cultural, political, or religious beliefs or characteristics."

The bill notably differed from previously proposed hate crimes bills in that it did not specify which classes would be protected, such as race, sex, sexual orientation or gender identity.

Those classifications -- specifically protections for LGBTQ Arkansans -- have prompted much of the opposition to hate crimes legislation from conservative lawmakers. Attempts to pass such a law date back as early as 2003.

Hickey said Friday that he was surprised by the Family Council's statement, noting that the conservative group's position placed it on the same side of the issue as Max Brantley, the editor of the left-leaning Arkansas Times.

"I respect the Family Council and I respect Jerry Cox," Hickey said. "I really don't know, if someone's taking their emotions out of it and taking their politics out of it, how someone can't support this bill. It's doing what people really want, which is protecting people."

On Thursday, groups including the Anti-Defamation League, the Human Rights Campaign and the Urban League of Arkansas all released statements condemning the sponsors of SB622 for failing to specify which classes of people would be protected under the proposal.

In its statement, the Anti-Defamation League suggested that SB622 was written broadly enough to cover crimes committed against Nazis and white supremacists, and that "legitimate" hate crimes legislation should specifically address victims targeted because of race, religion, national origin, disability, sexual orientation or gender identity.

The Family Council raised similar issues with the broad scope of SB622.

"The bill fails to define important terms like 'recognizable and identifiable,'" Cox said in his statement. "This bill is so ambiguous that it's impossible to know just how far-reaching this legislation may be."

The Family Council boasts a mailing list of more than 10,000 families and churches, which it uses to disseminate its position on issues at the Legislature. Earlier this session, the group supported and helped pass a ban on nearly all abortions in the state.

Cox told the Arkansas Democrat-Gazette on Friday that the group had sent out an email to its mailing list announcing its opposition to SB622, and was preparing to send out a letter on the bill next week.

Still, Cox said he expected SB622 to get more momentum than previous attempts to pass a hate crimes bill, including an effort earlier this year by state Sen. Jim Hendren, an independent from Sulphur Springs.

While neither Hickey nor Shepherd would say whether they have the votes in their respective chambers to pass the bill, Cox said it was unlikely the leaders would file the bill without enough support to get it to the floor in at least one chamber.