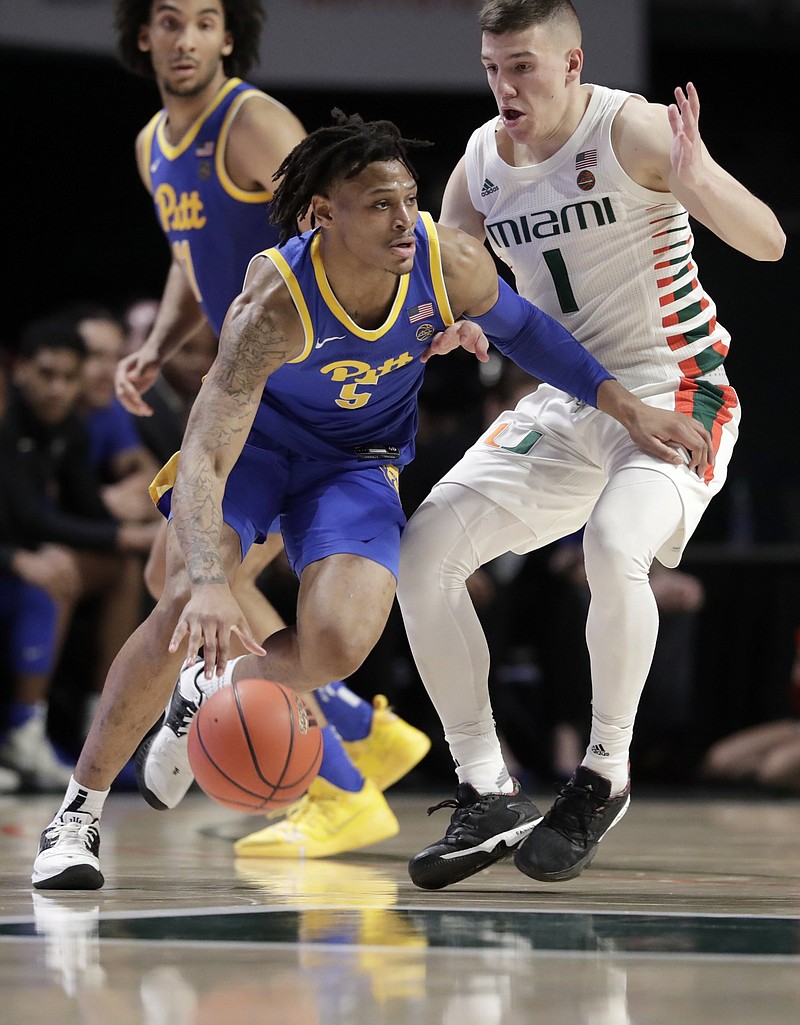 Au’Diese Toney (5) dribbles against Miami while playing for Pittsburgh in 2020. Toney, who averaged 14.4 points, 5.9 rebounds and 2.3 assists per game for the Panthers this season, announced Thursday he was transferring to Arkansas. (AP file photo)

Toney, 6-6, 210 pounds, left the Pittsburgh program Feb. 25 to enter the NCAA transfer portal after reaching a mutual decision with Panthers Coach Jeff Capel. He was averaging 14.4 points, 5.9 rebounds and 2.3 assists per game before his departure.

Arkansas Coach Eric Musselman's resume -- and that of his staff -- along with the Razorbacks' run to the Elite Eight, won over Toney.

"They've done a really good job with transfers and player development and they have an atmosphere of winning, and I want to be a part of that," Toney said.

Musselman said he was thrilled about the addition of Toney to the program during his Zoom meeting with members of the media shortly after Toney's announcement.

"He's going to be an incredible piece for us moving forward. ... Would consider him a position-less player," Musselman said. "Those guys are so, so valuable. I'm ecstatic.

Musselman's success with transfers Caleb and Cody Martin at Nevada along with Justin Smith, Jalen Tate and JD Notae at Arkansas, helped with his decision.

"He did a really good job with the Martin twins when they came from NC State to Nevada," Toney said. "They progressed a lot. He brought out a lot potential they didn't know they had. Same way with the transfers that came in this year. They [Arkansas] made a tremendous jump development wise, and that's why they were such a good team."

Toney said he knew he was coming to Fayetteville about a week ago.

"I just kept watching games," Toney said. "That just felt like home. Thats the place I want to be. The system perfectly fits with the style of play I like to play."

Musselman's energy and love for the game has impressed Toney.

"I love everything about Coach Muss," he said. "He brings so much joy and excitement to the game. That's what its all about."

Toney honors his late grandmother, Harriet Toney-Cotton, who passed away from cancer in June, by displaying her picture on his Twitter account.

"She was a very important and big part of my life," Toney said. "She was like my second mother. She was a very hard working woman. I was the oldest of the grandkids. If you saw her, you saw me. I was always with her, 24-7. She basically raised me. So I was coming to surprise her the week that she passed, but she passed away before I could get to her."

Toney is the first transfer to join the Razorbacks and Musselman this spring. Arkansas is actively recruiting several other transfers.