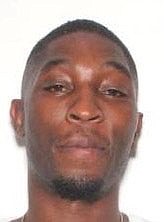 Lionel Larrinaga, 35, of Fort Smith was arrested on a manslaughter warrant in the death of Averill James, 18, according to Aric Mitchell, police spokesman.

Police went to Allied Gardens Estate Apartments at 5221 Johnson St. for a shots fired call on the night of Aug. 17, according to a news release Aug. 18.

Officers found James at the complex. He died at a local hospital.