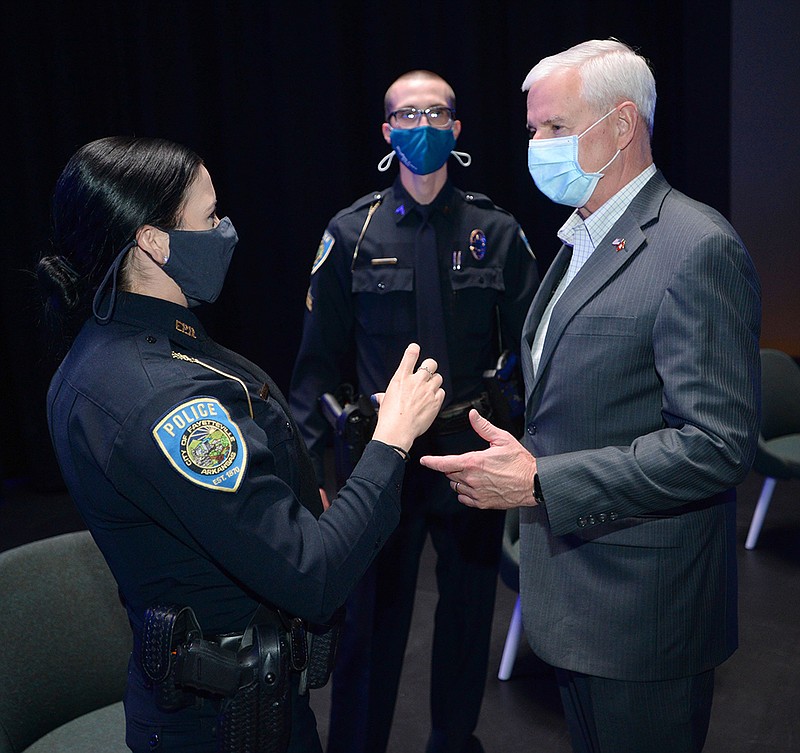 Rep. Steve Womack (right) speaks Thursday with Natalie Eucce (left) and Seay Floyd, both officers with the Fayetteville Police Department, before awarding them the attorney general’s award for distinguished service in policing for their actions after fellow officer Stephen Carr was killed Dec. 7, 2019. Womack made the presentation at the Fayetteville Public Library and then toured the library’s new addition. (NWA Democrat-Gazette/Andy Shupe)

"If we're going to complete I-49 in our lifetimes, we need a new bridge over the Arkansas River and about 12 miles of new interstate near it," Womack, R-Ark., told the gathering of about 50 people in First United Methodist Church.

Such a project will get done much faster if individual members of Congress are able to set some of the specific priorities in spending, he said. The same goes for the U.S. 412 bypass around Springdale and proposals to deepen the channel of the Arkansas River, he said. He and other members of Congress should be allowed to earmark those projects in budget bills, within limits, Womack said.

When finished, I-49 will link Kansas City to New Orleans, running through western Arkansas. Communities all along its route from Bella Vista to Texarkana have sought the project for decades. The gap remaining runs from south of Fort Smith to north of Texarkana.

"We all pay federal taxes, and it's important we invest in rural and under-served areas," Williams said.

Earmarked spending, derided as "pork barrel projects," was eliminated in 2011. Womack voted last week to allow members of Congress to earmark money for local projects under a new, proposed set of rules. These include limits on the amounts available and would require local government entities such as city councils to pass resolutions in support of any given project.

Womack also explained to the group his decision to vote for the certification of President Joe Biden's election.

"I was under enormous, unprecedented pressure not to certify the election," Womack said. "The calls we had were 20 to 1, maybe 20 to nothing, to challenge the election."

He swore an oath to defend the Constitution, Womack said, repeating his oath of office to the group. Under the Constitution's provisions, he said, he could not justify a vote to overturn the election results certified by other states.

"I was one of the one in 20" who called Womack's office in support of certification, Robertson said. "I really did appreciate his understanding of the Constitution. That means a lot."