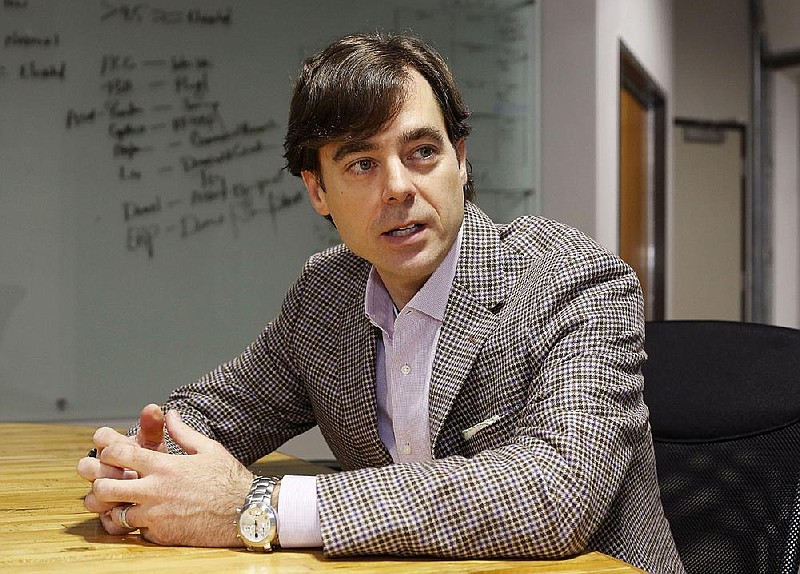 Jeremy Wilson, a managing partner and co-founder of Northwest Arkansas-based venture capital firm NewRoad Capital Partners, has been appointed by Gov. Asa Hutchinson to the University of Arkansas Board of Trustees.

"The UA System is foundational to the culture and economics of the state of Arkansas and helping the University continue to grow this amazing legacy and its commitment to educational excellence is the honor of a lifetime," Wilson said in a statement released Wednesday by Hutchinson's office.

Wilson earned a bachelor's degree in finance from the University of Arkansas, Fayetteville, according to biographical information posted on the website of NewRoad Capital Partners. The announcement Wednesday listed Wilson as having attended Harvard Business School's executive education program.

He did not respond to messages Wednesday.

In a 2016 interview, Wilson told the Northwest Arkansas Democrat-Gazette that he appreciated the mentorship he received while working for 16 years at Bentonville-based Walmart, a time that included working in investor relations. Wilson listed former Walmart Chief Operating Officer Don Soderquist as an influential person in his life.

"One time he told me that if you do what's right, you will never be wrong. He said it's a hard thing to do, but if you carry that philosophy through your career and through your life, you will look back at the end of it and feel very good about the things you've done. I've tried to do that," Wilson said.

Wilson also is the founder of Springdale-based Now Diagnostics, a health testing company, and he serves as chairman of the company's board of directors. UA-Fayetteville's top finance officer, Ann Bordelon, worked as the start-up company's chief financial officer and chief administrative officer from Oct. 2015 to March 2017, according to her application materials submitted to UA.

Wilson replaces Texarkana attorney John Goodson on the university board.

"With his experience, from the ground floor of several startups to multinational companies, he will bring an entrepreneurial mindset and innovative approach to the Board for the next decade and beyond," Hutchinson said in a statement.

Hutchinson's office announced Wilson as being "of Bentonville." He becomes the third board member to be considered of the state's 3rd Congressional District, which includes much of Northwest Arkansas.

State law requires that two members of the University of Arkansas board be appointed from each of the state's four congressional districts. Two additional board members are at-large selections.

The University of Arkansas System's website includes information about each member of the 10-person board, and only one member, Steve Cox, is listed as being "of"a city that's within the state's 1st Congressional District. This district includes counties on the state's eastern border as well as what's generally considered northeast Arkansas.

Based on the cities listed for other trustee members, the state's other districts have at least two members on the university board.

UA System spokesman Nate Hinkel said formal records list another trustee, Ted Dickey, as being from the 1st Congressional District. Unlike for other trustees, no city is listed in Dickey's online biography on the UA System's website.

Dickey, a real estate fund manager, was appointed a trustee by Hutchinson last year and at the time announced as being "of Stuttgart."

"The info on the website sometimes changes and is an informal listing, however we do keep a more formal internal document that lists Trustee Dickey as being from District 1. There is no reason other than inconsistency of why Stuttgart is not on the site," Hinkel said in an email Wednesday.

Dickey has recently been active with civic and educational organizations in Little Rock, a part of the state's 2nd Congressional District. Political campaign finance data from the Federal Election Commission lists donors by name, mailing address, occupation and employer. Records show a September 2020 donation from Ted Dickey from Little Rock, with a "finance" occupation. A donation of $500 went from Dickey to the "Huck PAC" committee, which was founded by former Arkansas governor Mike Huckabee to support conservative political candidates, according to its website.