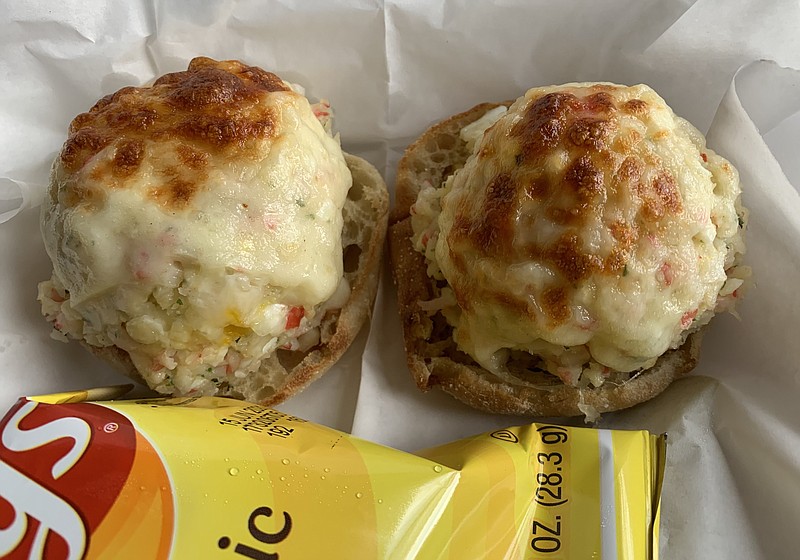 The crab salad from Delicious Temptations has quasi-crab surimi instead of actual crab meat, mounded on two halves of an English muffin and topped with melted provolone. (Arkansas Democrat-Gazette/Eric E. Harrison)

This column marks one solid year of restaurant writing in this paper based almost entirely on to-go orders.

As the number of people who are fully vaccinated (including us) increases and it becomes safer, or at least less scary, to once again dine at a table in a restaurant, we will likely resume edging closer to doing full restaurant reviews.

But for the moment, enjoy our peripatetic passage through the portals of provender. Per our perennial — or at least annual — practice, we're still avoiding national chains, remaining within a reasonable hot-food radius and paying for all our meals up front.

We were astonished to discover when we double-checked that we had not yet paid a visit to this venerable breakfast-brunch-lunch mecca, just off the beaten path (in one of several strip centers not on, but accessible via North Rodney Parham Road).

We weren't really expecting, at that price, the crab salad to contain actual crab meat, and it didn't. But there's a generous portion of surimi (that quasi-crab made from pollock) in what is essentially otherwise an egg salad (chopped hard-boiled eggs, purple onion and mayonnaise), mounded on two halves of an English muffin and topped with tomato and melted provolone. (You can substitute chicken salad or tuna salad if you prefer.) It comes with a bag of commercial potato chips. It would, of course, have tasted a lot better with real crab, but this was sufficiently tasty and sufficiently filling (a half sandwich might have been enough if we'd been slightly less hungry). We had the kitchen hold the purple onion from the salad and the tomato from the top. Our only complaint, a small one, is the English muffin could have been toasted a little crisper.

HOW IT WENT: We placed our order by phone; the gentleman who took our order promised it would be ready in 10-15 minutes so we showed up in exactly 15 minutes. After standing at the door for a while, obeying the "wait to be seated" sign because we weren't sure of the pickup procedure, and being, well, not ignored by the obviously overworked staff, but not being helped, we got on our own into the line at the register behind another to-go customer and three or four folks waiting to pay their checks. So add at least five more minutes before the gentleman got back into the kitchen and handed over our bagged-up order.

HOW IT'S GOING: The place was still quite busy just past the peak of its lunch rush. 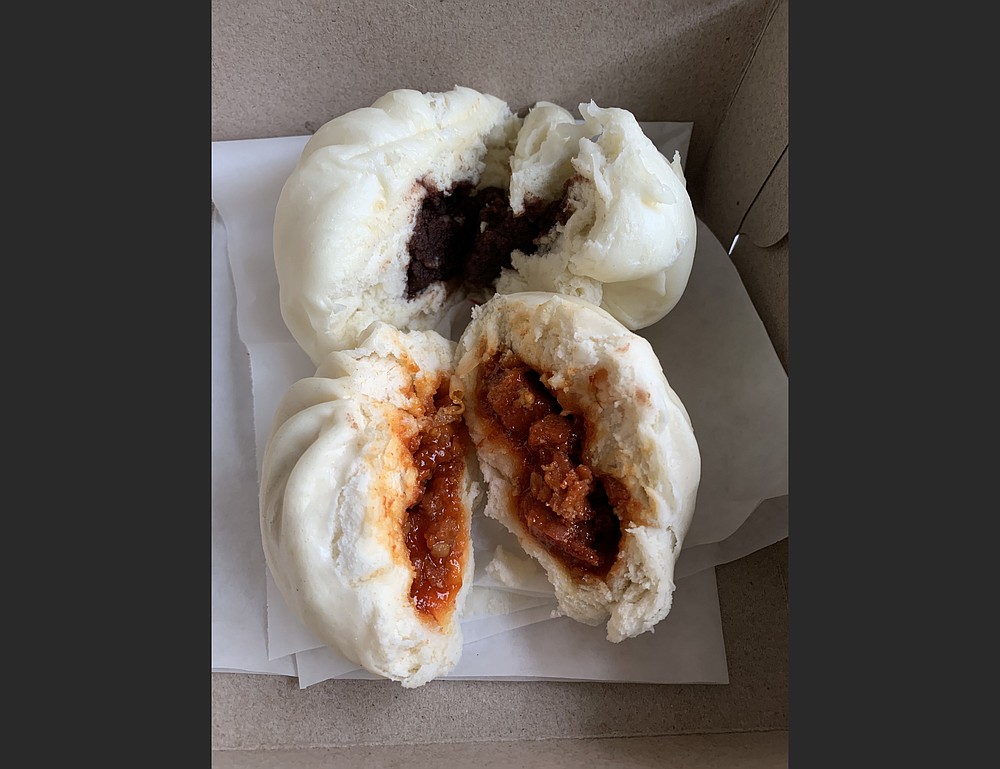 Kawaii, part of a mini-chain with an outlet in Conway, has taken over a former cupcake shop on the corner of Kavanaugh Boulevard and Fillmore Street in Little Rock's Pulaski Heights. As its name suggests, its principal attraction is a wide variety of milk and fruit teas with an array of boba balls (starting with classic tapioca and getting increasingly exotic from there). But it also sells some food items, including grab-and-go packaged pastries, Asian ice cream sandwiches and bao — steamed buns with a variety of fillings often part of dim sum lineups.

The plump exteriors are made of folded, bready steamed mantou dough. We enjoyed the Korean BBQ and meat in a slightly sweet, distressingly bright orange barbecue sauce — twice, actually, since we went back for a second time. This time we also branched out to try the red bean filling, which was neither as sweet nor as red — more like a dark crimson, actually — as we had expected. The buns may or may not actually be made on the premises (we rather think not) but they taste fresh and they're quite filling. Two buns made for a very sufficient lunch.

The variety of teas was sufficiently bewildering; we went for the familiar Thai milk tea, with a superfluity of chewy tapioca balls, served up in a plastic cup sealed by a machine with a plastic-wrap top through which one sticks a fat, pointed straw with a bottom opening just wide enough to suck up the boba. As the menu bubbly says, "It's like a quirky snack and drink in one!"

HOW IT WENT/HOW IT'S GOING: We were the only customers on our first visit. It took less than five minutes for the bao to come out of the kitchen. On our second visit, the place was crowded and there was a line at the register, so it took closer to 10 minutes to get our food. 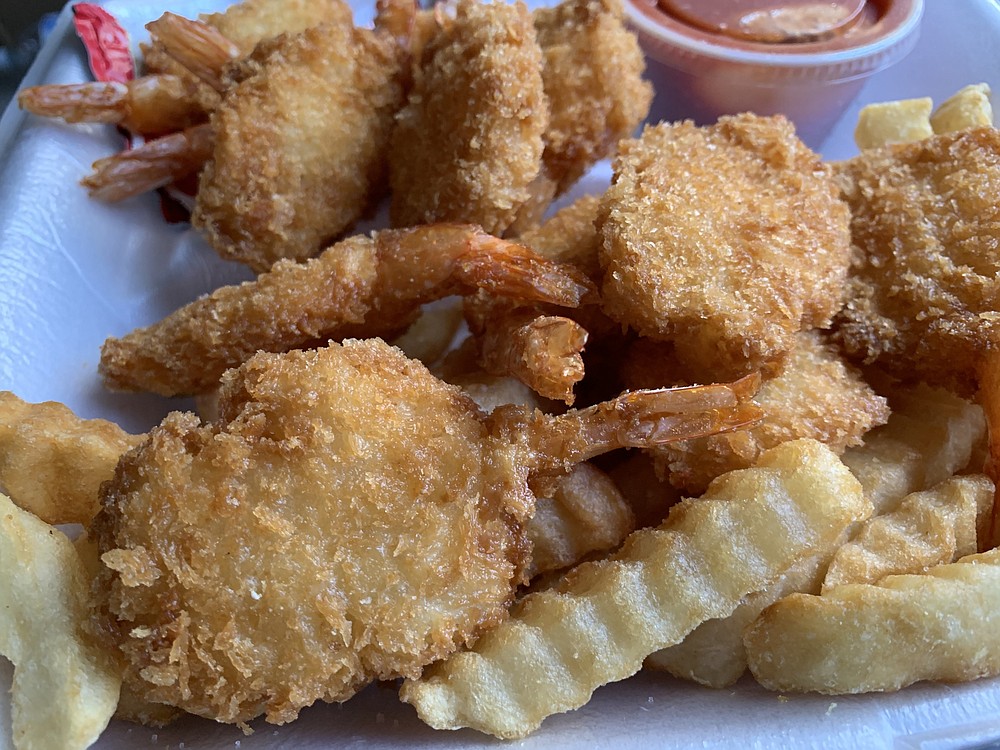 WHAT WE GOT: 12-piece Butterfly Shrimp Basket ($15, includes tax)

This is a food truck — more properly, a food trailer — that is parked, semi-permanently, on what used to be a used-car lot, now vacant, on the southeast corner of West Third and Victory streets, across from a Firestone outlet. Though painted on its side is the legend "The Best Fried Catfish & Hickory Smoked BBQ in Arkansas," the menu, at least for the moment, no longer offers barbecue. But we can find no fault with the medium-size butterflied shrimp we got on a recent weekday — crusted in a crisp, well-drained batter with just the tails sticking out (the better to grip them with). A dozen may have been too many, but the six-piece basket ($9), the only other alternative, would have been too few. The basket (actually a foam clamshell) comes with a large pile of crisp-outside, soft-inside crinkle-cut fries and an ample supply (in a large-ish plastic cup) of slightly sweet cocktail sauce, as well as several ketchup packets for the fries. But we didn't find the pickle the menu promised. We look forward to checking out the catfish on a subsequent visit.

HOW IT WENT: We placed our order, muffled by our mask, at the window and were told all orders are cooked fresh to order, which took about 12 minutes. Not a problem on a pleasant spring day.

HOW IT'S GOING: There was one customer ahead of us, and one behind us. 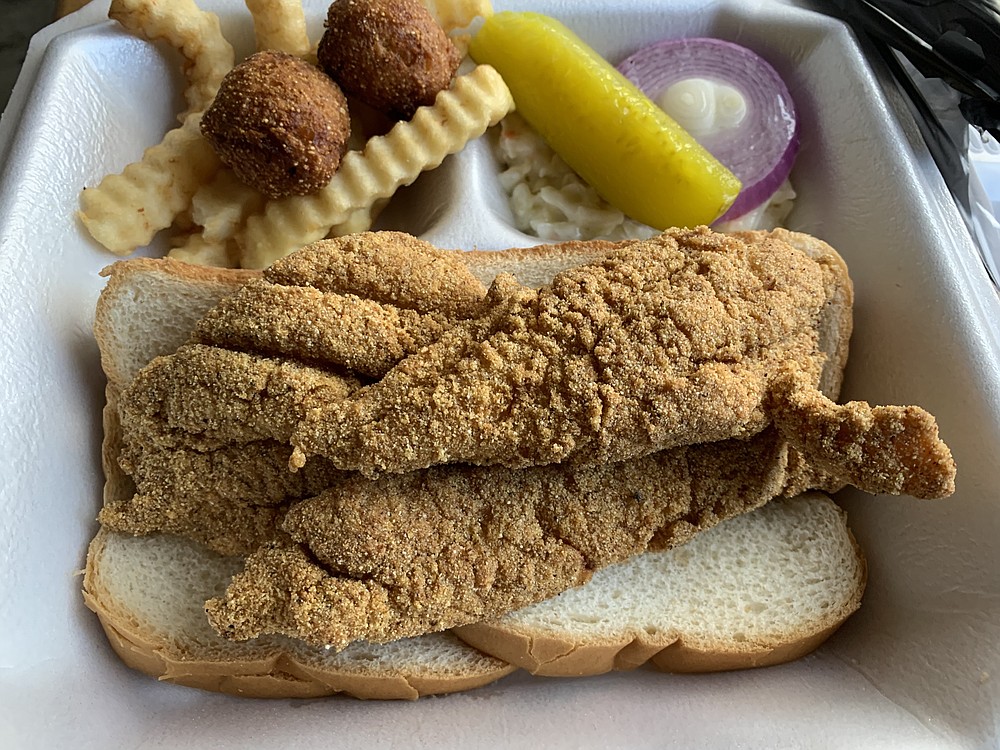 Margo's Catfish Diner in North Little Rock's Argenta comes close to living up to its claim that it serves the "best catfish this side of the Mississippi." (Arkansas Democrat-Gazette/Eric E. Harrison)

And speaking of catfish: Margo's brags right on the menu (and in its Facebook page address) that it serves the "Best Catfish this side of the Mississippi." We're not in position to confirm, deny or dispute such a claim, but if you make it, you'd better be prepared to back it up with some pretty darn good catfish. And Margo's doesn't disappoint: Three pieces of clean-tasting catfish in a mild cornmeal batter with two hush puppies that were surprisingly spicier than the catfish and not quite a dozen crinkle-cut fries, plus a dill pickle spear, coleslaw (we asked them to hold it but they didn't) topped with a beautiful slice of purple onion (we didn't want it, but we forgot to tell them to hold it, and we're glad we didn't, although it was too gorgeous to eat).

HOW IT WENT: We ordered in person at the counter — the young woman in charge had been sitting in her car out front and we felt sorry to disturb her — and waited more than 20 minutes for our order, proof — we hope — that it was completely prepared to order. It gave us a chance to explore the Melrose Grocery & Deli side of the long-standing business, in an otherwise entirely residential part of Argenta.

HOW IT'S GOING: There was one customer ahead of us, who was still waiting for her order when we left, and two customers behind us.