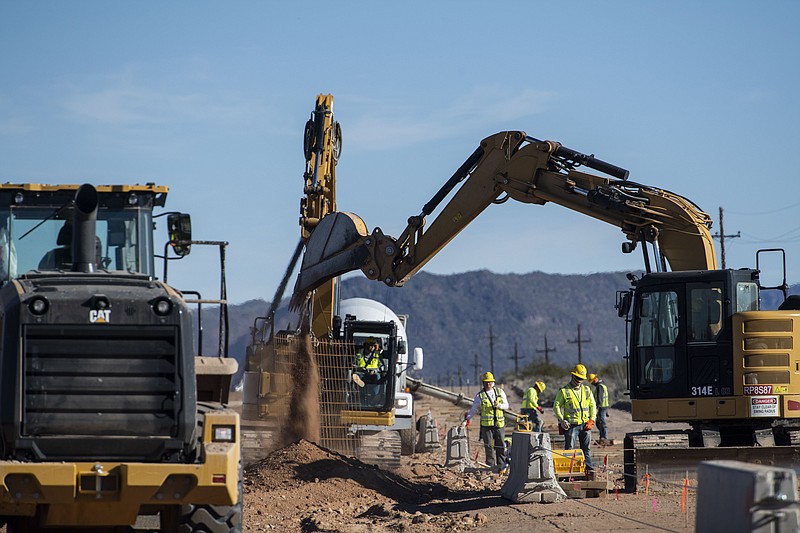 The latest figures from Customs and Border Protection show that the rate of construction of the border wall has nearly doubled since the beginning of the year.

In southeastern Arizona, crews have been using dynamite to blast the steep sides of Guadalupe Canyon, a rugged span where the cost of the barrier exceeds $41 million per mile. Across the state at Organ Pipe Cactus National Monument, border agents have been met with protests by members of the Tohono O'odham Nation attempting to block the bulldozers near ancestral burial sites.

Customs and Border Protection officials are preparing a ceremony for President Donald Trump next month that will mark the completion of 400 miles of new fencing. The administration has installed more than 341 miles, according to the latest figures, and agency officials say they remain on track to finish at least 450 miles by the end of 2020.

Mark Morgan, the acting Customs and Border Protection commissioner, told reporters that the president has proved his doubters and critics wrong.

"Even as the nonbelievers, the folks who have been out there for a very long time who said we were never going to get this done, what I refer to as the judicial activism of lower court that have tried to stop our construction of the wall, the false narratives and, quite frankly, the lies out there about the effectiveness and need of the wall -- despite all that -- this president has remained steadfast in his commitment, his commitment to the American people, and to the men and women of CBP," Morgan said.

Democratic presidential nominee Joe Biden has said he will immediately halt construction of the barrier if elected, a looming threat for the private companies that have secured billions of dollars in contracts. Crews have been working 24 hours a day, seven days a week, on at least five locations across the border, according to officials overseeing the project who spoke on the condition of anonymity because they were not authorized to discuss the matter publicly.

The pace of construction has had the biggest impact on Arizona, where the government has accelerated the project by building through protected areas and federal lands -- areas where the administration is able to bypass environmental laws, archaeological reviews and other safeguards.

Progress has been slower in the Rio Grande Valley of South Texas, the busiest span of the border for illegal crossings, and the region that Customs and Border Protection has identified as its top priority for barrier construction. Nearly all of the land where the government seeks to build is in private hands.

The Trump administration has completed five miles of new barriers in the Rio Grande Valley, agency officials said, citing the difficulty of accessing and acquiring private land, and the engineering challenges of installing the barriers along aging river levees. Customs and Border Protection officials said they have obtained about 40% of the land they need in the Rio Grande Valley.

Administration officials have noted the growing number of migrants caught hiding in tractor trailers or coming ashore on California beaches as an indication that the new fencing is leading smugglers to adopt more desperate tactics. In the San Diego area, where double-layered fencing creates a formidable barrier, the number of migrants arrested at sea has tripled since 2018, according to Customs and Border Protection figures.

But the effectiveness of the new structure is difficult to evaluate because the administration has used the coronavirus pandemic to adopt emergency procedures allowing agents to quickly expel border-crossers to Mexico.

The president has obtained $15 billion for the project, but just one-third of that money has been authorized by Congress. The rest, nearly $10 billion, has been diverted from the U.S. military budget, giving Trump enough to build 738 miles of new barriers, enough to cover more than a third of the 2,000-mile boundary with Mexico.

In addition to the 331 miles of new barriers, about 250 miles of wall are "under construction" and another 157 miles are classified as "preconstruction," Customs and Border Protection figures show.

Agency officials said the current pace of construction is possible because the administration has cleared bureaucratic and financial hurdles, giving crews a clear path.

The U.S. Army Corps of Engineers said the private contractors building the structure do not receive financial incentives to finish the job ahead of schedule.

As with so much else, the future of the border wall project is contingent on the outcome of the Nov. 3 presidential election.

If Biden wins and stops work, construction companies will receive less than the full value of the contracts, according to a current and former official with close knowledge of the project. Those contractors could bill the government for a "demobilization cost" as they withdraw crews and equipment from the border, but they would likely need to go to court to seek additional funds, the officials said.

Biden said he favors "high tech" systems that rely on surveillance technology and would direct resources to the legal border crossings where most illegal narcotics are seized.

Biden did not commit to removing or dismantling the barrier, as opponents of the project have advocated.

Trump has urged several design changes to the barrier to make its appearance more intimidating, insisting, for instance, that it should be painted black to absorb more solar radiation.

Customs and Border Protection officials said they do not have the funding available to order crews to go back and paint segments that have been installed, but four sections currently under construction in Texas will receive a black epoxy finish before installation, fulfilling Trump's wishes.

The canyons and deserts of southern Arizona have become a battleground for opponents of the project who include conservative ranchers and environmental activists. Dan Millis, who leads the Sierra Club's campaign against the barrier, called it "totally enraging" and "completely intolerable."

"We're wasting billions upon billions to build an apartheid wall twice as tall as the Berlin Wall," he said. "It's a complete waste, and it's a shame and a blemish on this country."

Clashes between protesters and border agents at Organ Pipe this month reflect an intensification of efforts by native groups to protect places they say are at risk of irreversible damage, including archaeological sites and fragile ecosystems such as Quitobaquito Springs, less than 100 yards from the path of bulldozers, where diminishing water this summer has imperiled an endangered pupfish population.

The Trump administration declared a national security emergency at the border that allows the crews to expedite construction. Customs and Border Protection officials said some of the Sonoyta mud turtles and endangered Quitobaquito pupfish at the springs have been relocated.

The spring's clay liner is leaking from several cracks, officials said, and a lack of monsoon rains this summer has left the oasis with its lowest water levels in at least a decade.