RECIPE: This Spinach and Chermoula Pie serves as a warm hug, until we can all embrace again 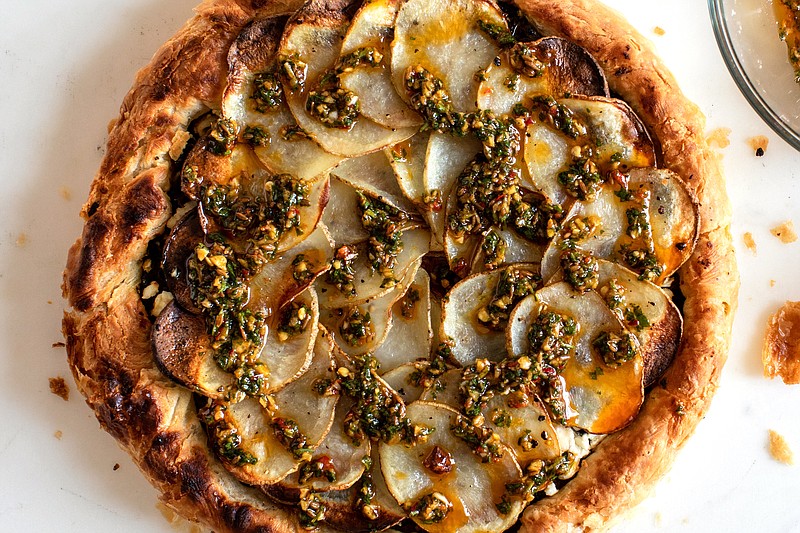 A spinach and chermoula pie. Until better times, stick to hugging those in your bubble, but make this for those you’re able to share food with or deliver food to. (The New York Times/Andrew Scrivani)

LONDON — Recently, when I posted a picture of a homely, frozen-spinach-filled pie on my Instagram, it got a lot of love. Usually, it's red tomatoes that get the red hearts. It was interesting, then, to think about why this simple pie struck such a "Yes, please!" chord.

There are many words I could reach for to explain this pie's appeal, and they'd all be true. "Versatile," for instance, with a filling that can be easily adjusted to what may already be in your fridge. Swiss chard works well instead of (or as well as) the spinach; mint and parsley along with (or instead of) the dill; cheddar instead of the feta, if you prefer; or even cubes of firm tofu for a vegan filling. 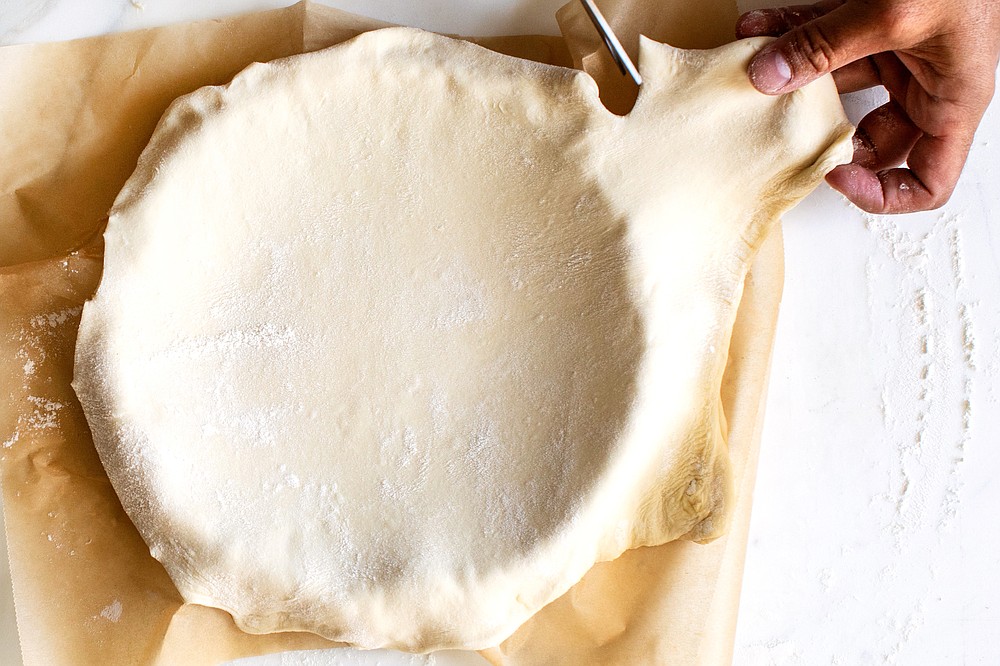 Frozen puff pastry forms the base for a Spinach and Chermoula Pie. (The New York Times/Andrew Scrivani)

"Rustic," a word often used euphemistically to mean "it may not look all that pretty or neat, but it will still taste great," could also be reached for. "Frugal" also works, and nods to its appeal: no fancy kit or skills needed, no ingredients to go out of your way for.

You can "dress it up" with chermoula, for example, or "dress it down" with just a squeeze of lemon, to keep things simple. A puff-pastry pie shell filled with spinach and feta is "approachable" and "crowd-pleasing"; "nutritious" and "hearty"; "unpretentious," with a bit of a built-in "wow."

But what is missing from this list of words, though, is the very thing that makes it so utterly lovable and desirable and "I need this in my life right now-able" in the first place. It, as with all good dishes (and good relationships), feels like a great, cozy nurturing hug. And that's exactly what we all need right now.

After months of not being able to hug those we love, people are, I think, looking more and more to food to provide the comfort being denied to them in their day-to-day lives. It was this — the hug, the comfort — that people were connecting to with the picture of my pie.

Hugs-from-the-kitchen come in many forms, I know, but so often they come in the form of a potato. Yes, the rustic, versatile, approachable, unpretentious, nutritious, hearty potato is what, to my mind, saw this pie get so many likes.

The thinly sliced layer that sits on top of the filling says "comfort." It says "love"; it says "hug." This is what we need and want.

When autumn has set in and the odd supper-on-the-sofa is indulged, it's a whole potato each everyone will be reaching for: baked in a hot oven and smothered with melted cheese. For now, though, while we're just beginning to wonder where our slippers are, one potato is enough to give the dish its "right here, right now, hold me" feel. 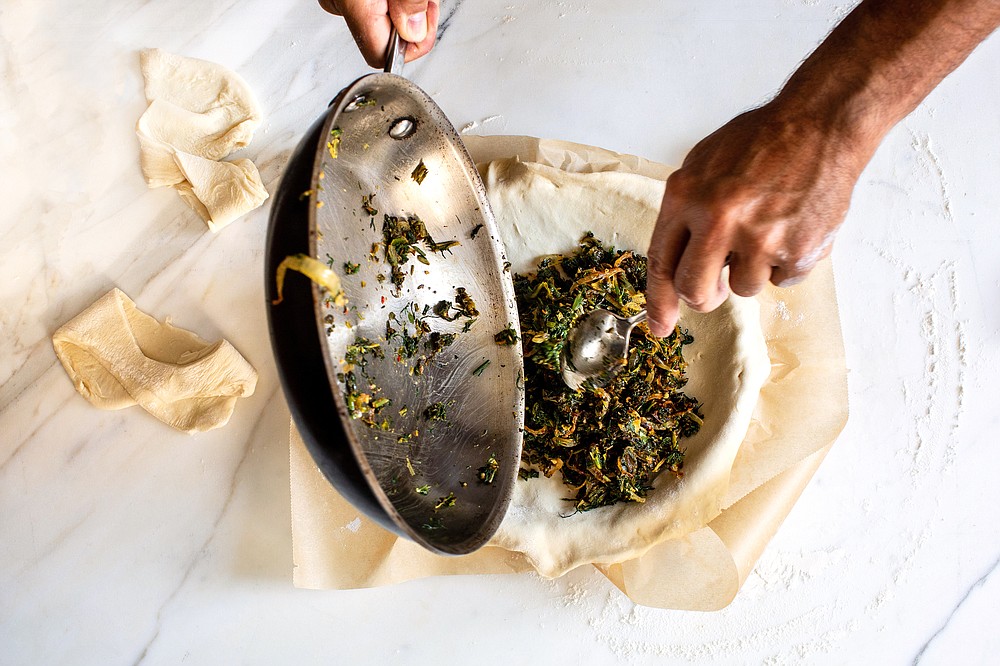 Until better times, stick to hugging those in your bubble, but make this for those you're able to share food with or deliver food to. "Deliverable" and "shareable" — another couple of words to add to the list.

For the Chermoula Paste:

Prepare the chermoula paste: Add the garlic, cilantro, chile, cumin, paprika, ½ teaspoon salt, a good grind of pepper and 3 tablespoons oil to a food processor. Pulse into a coarse paste and set aside.

Prepare the pie: Add 3 tablespoons oil to a large skillet and heat over medium-high. Once hot, add the onion and cook, stirring occasionally, until softened and well browned, about 12 minutes. Add half the chermoula paste (reserve the rest), the spinach, 1 teaspoon salt and a good grind of pepper, and cook for 2 minutes more, stirring to combine. Remove from the heat, then add the dill and lemon zest. Set aside to cool, about 20 minutes.

Line a 9-inch pie or tart pan (tin) with a removable base with a piece of parchment paper large enough to cover the base and a little bit over the sides. (The excess will help you lift the tart when it's baked.) On a lightly floured work surface, roll out the pastry with a floured rolling pin to a 12-inch square. Lay the puff pastry on the parchment, pressing in the pastry to fit the base and sides of the pan and cutting away any excess so it overhangs by about ¾ inch.

Poke the base all over with a fork (about 10 times), then spread the cooled spinach mixture over the base evenly. Sprinkle the feta on top, then fold and scrunch the sides over the filling to create a rim. (Don't worry if it's not perfect.) Refrigerate the pie for at least 20 minutes, or up to overnight, covered.

Trim and discard the ends of the potato and use a mandoline or very sharp knife to cut the potato into paper-thin slices. Toss together in a bowl with 1 tablespoon of the remaining olive oil, plus ½ teaspoon salt and a good grind of pepper. Fan out the slices on top of the spinach and feta in a circular pattern, overlapping slightly, to cover the filling but not the pastry rim.

Place the chilled pie on a baking sheet and bake until cooked through and nicely colored, about 50 minutes. Set aside to cool, about 15 minutes, before gently transferring to a wooden board or serving plate.

When ready to serve, stir the lemon juice and remaining tablespoon olive oil into the reserved chermoula. Spoon half of the chermoula all over the pie and serve the remaining in a bowl alongside. Serve warm, or at room temperature.